Joe Francis, 49, is called 'creepy' for bizarre tribute to Kylie Jenner on her 25th birthday

Girls Gone Wild creator Joe Francis, 49, is called out for ‘creepy’ birthday tribute to Kylie Jenner as he checks her out in a white bikini: ‘She’s like my sister’

By Deirdre Simonds For Dailymail.com

To mark the makeup mogul turning 25, the controversial film producer, 49, shared a throwback with the reality star at his luxury beachfront estate, Casa Aramara, while they were celebrating her reaching the age of majority in the United States.

‘Happy Birthday @kyliejenner!! I’m so proud of you and all your success!!’ Francis captioned a picture of himself seemingly checking out the then-teenager. ‘It seems like yesterday that we were celebrating your 18th birthday together ❤️.’ 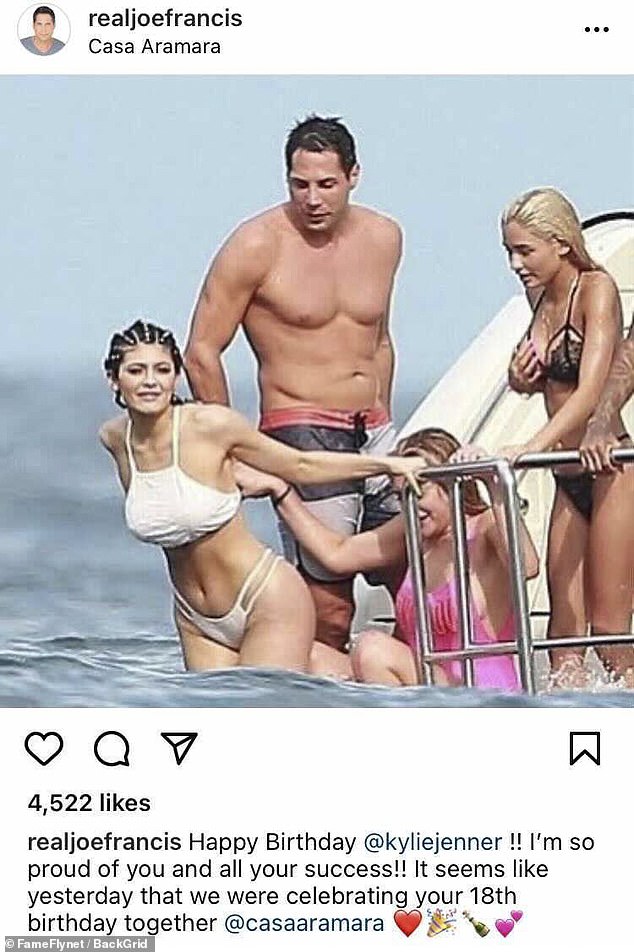 Commenters were quick to call our the entrepreneur for sharing an image, in which he was clearly looking down at her backside as she rocked a white bikini on a yacht.

In response to someone asking if he didn’t have a better picture’ that didn’t include him ‘checking her out,’ the father-of-two defended his choice.

‘I’m a man. All straight men always are looking at beautiful women. That’s why I’m so successful. Are you saying you hate God for making us this way? No other straight man is different or Girls Gone Wild wouldn’t of made billions of dollars,’ he replied. 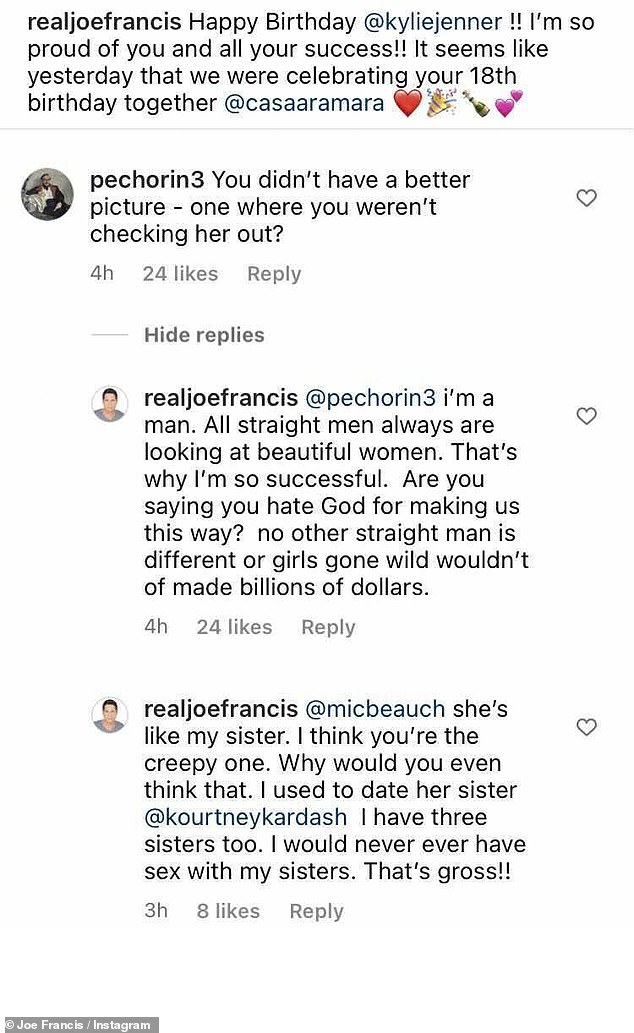 In response to someone asking if he didn’t have a better picture’ that didn’t include him ‘checking her out,’ the father-of-two defended his choice  by saying all ‘straight men’ are always ‘looking at beautiful women’ 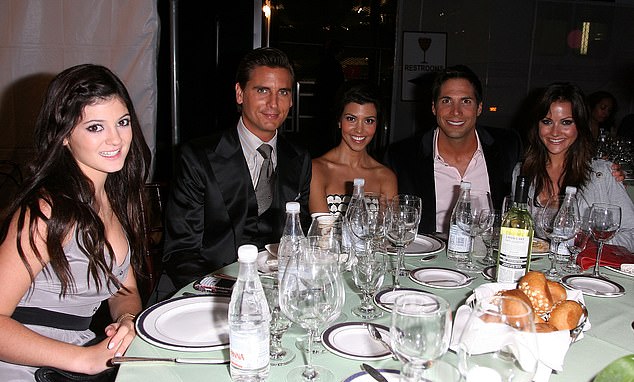 ‘She’s like my sister’: Francis pictured having dinner with Kylie Jenner (L), which she was 13, Scott Disick, Kourtney Kardashian and Christina McClarty in 2010

He then added that Jenner is like a ‘sister’ to him, in response to a follower calling him ‘creepy.’

‘I think you’re the creepy one. Why would you even think that. I used to date her sister,’ he wrote back. ‘I have three sisters too. I would never ever have sex with my sisters. That’s gross!!’

At the time, Jenner, who has been dating rapper Travis Scott after hitting it off at Coachella back in 2017, was still in a relationship with Tyga, who was on the trip. 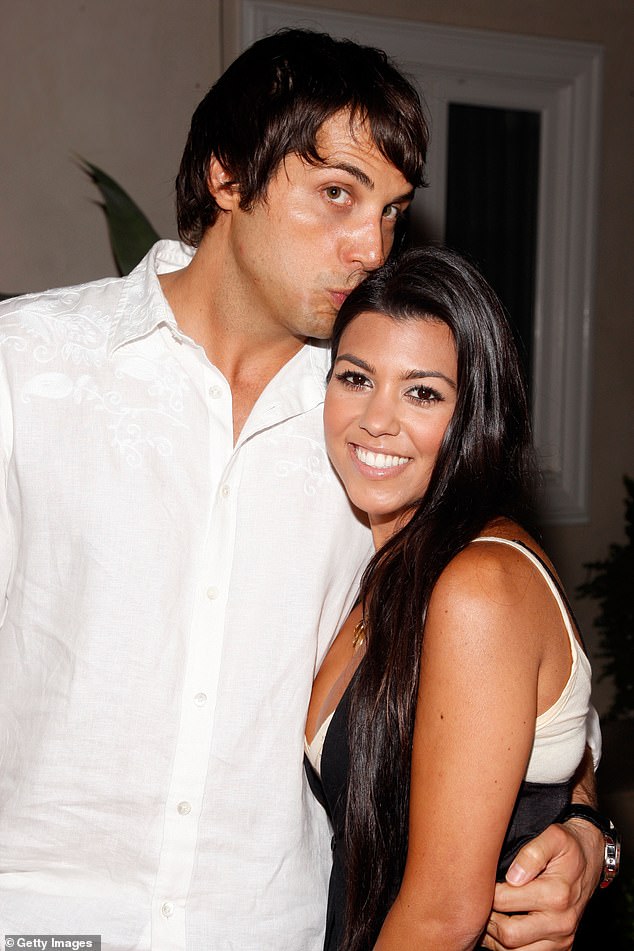 Blast from the past: Francis and Kourtney Kardashian briefly dated from January to September back in 2005; seen in 2008

Over the years, Francis has had numerous brushes with the law, including getting arrested and charged with three counts of false imprisonment, one count of assault causing great bodily injury and one count of dissuading a witness in 2011 when he allegedly attacked another woman and bashed her head into his tile floor.

Additionally, he’s faced accusations of being a child pornographer and sexual assault abuser. 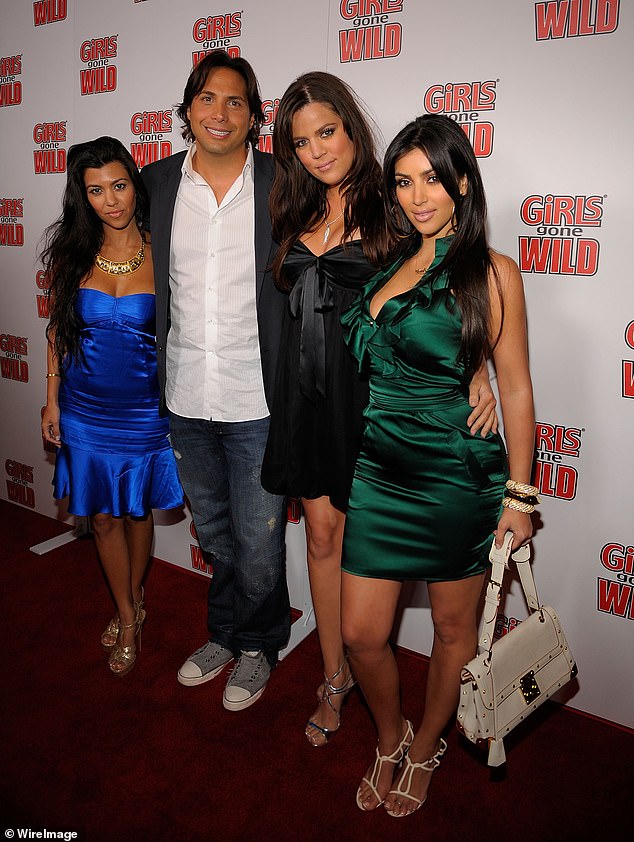 Friendly over the years: (L-R) Kourtney, Khloe and Kim Kardashian are seen with the producer at attend the launch party for Girls Gone Wild Magazine on April 22, 2008 in Los Angeles