John Mulaney appears to be enjoying his new role as a father.

The 39-year-old comedian looked every inch the doting dad as he was spotted taking his two-month-old baby for a walk in sunny Los Angeles on Wednesday. 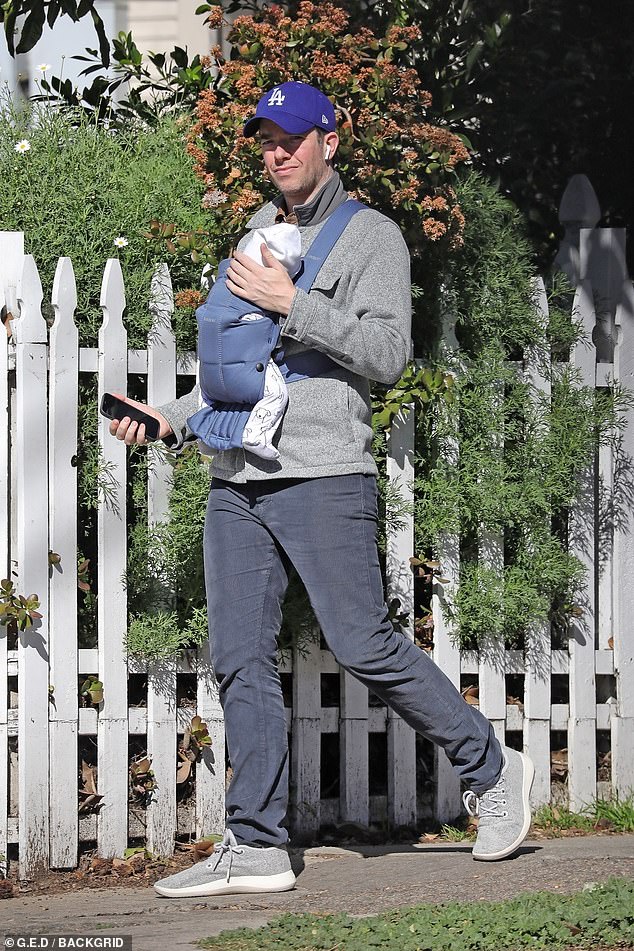 Doting dad: John Mulaney appeared to be enjoying his new role as a father as he was seen taking his two-month-old baby, with actress Olivia Munn, for a sunny walk on Wednesday

The Dickinson actor looked casual cool in a grey long-sleeve sweater, dark jeans, and a pair of grey sneakers.

He kept his eyes shielded with a blue Los Angeles baseball hat.

The star held a phone in his hand and was spotted Facetiming some family members during his walk. 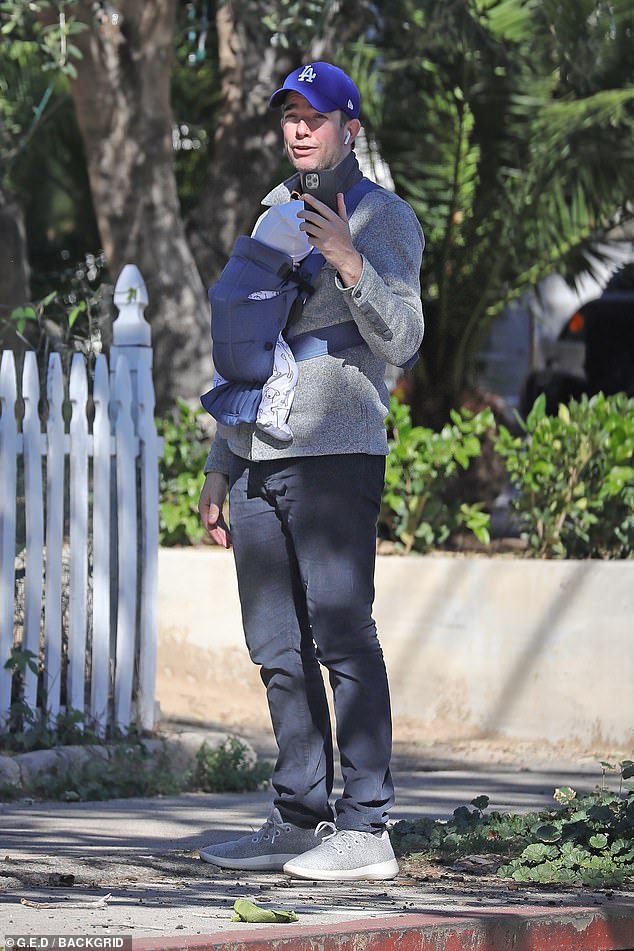 Sweet: The 39-year-old comedian carried his newborn, Malcolm Hiệp Mulaney, in a blue baby Bjorn as the two strolled in Los Angeles

John and Olivia welcomed their infant a day before Thanksgiving, just a few months after their relationship was made known to the public.

Munn and Mulaney first met during a wedding in 2015 and have remained friends in the years after their encounter, while John was still married to artist Annamarie Tendler, 36.

Following his initial split from his now-ex-wife, the comedian was reported to have started dating Olivia this past May, when Us Weekly confirmed the news.

The two remained together throughout the summer and were often spotted in each other’s company. 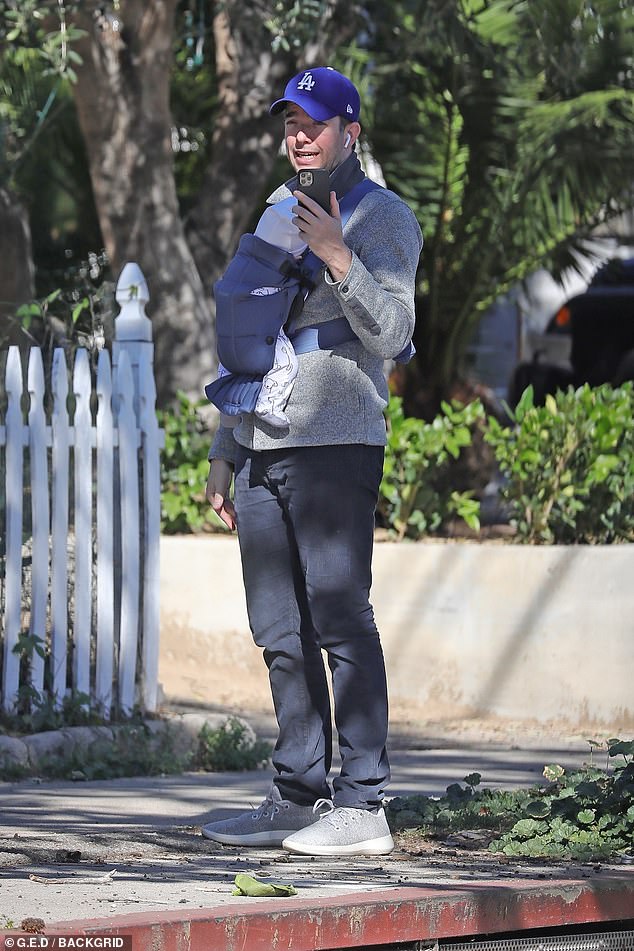 Mulaney and Tendler tied the knot in New York in the summer of 2014. The couple announced their split in May of 2021, and in July of that year Mulaney filed for divorce after nearly seven years of marriage.

Tendler recently opened up about their painful split in an interview with Harper’s Bazaar, saying it was ‘shocking’ and ‘surreal.’

‘Everything that has transpired has been totally shocking and I think surreal,’ she shared. 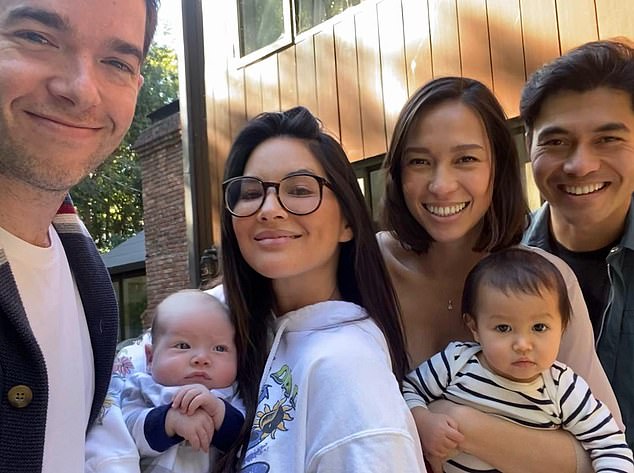 The divorce news came three months after Mulaney completed a 60-day stint in rehab to deal with addiction after a recent relapse.

Tendler appeared to be blindsided by the divorce, and in a statement to PEOPLE revealed that she was ‘heartbroken.’

‘I am heartbroken that John has decided to end our marriage. I wish him support and success as he continues his recovery,’ she said. 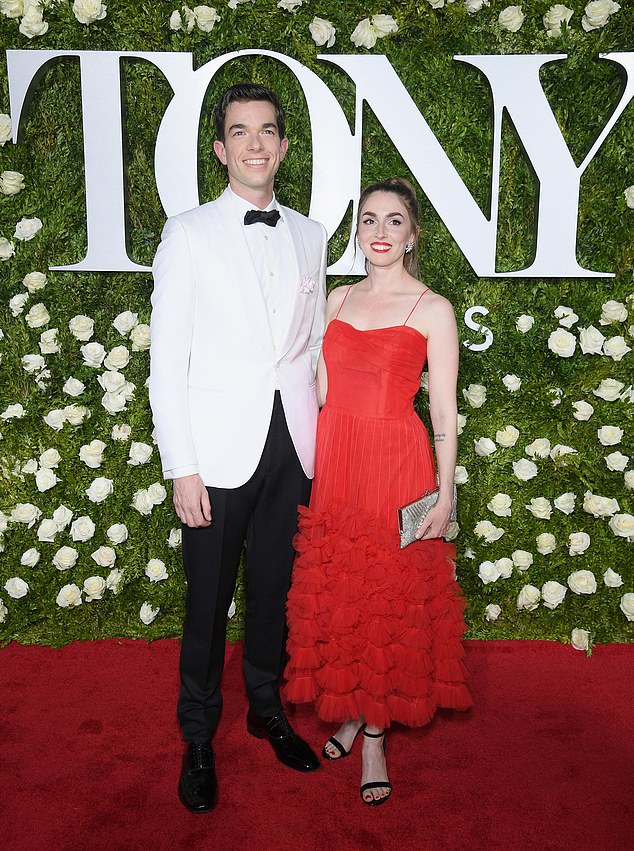 Ex-wife: Mulaney was previously married to artist Annamarie Tendler, 36. He filed for divorce in July 2021 after nearly seven years of marriage; The couple pictured June 11, 2017 in NY

RuPaul's Drag Race Down Under: Spankie Jackzon on how she'll spend $50,000 cash prize