Jonathan Van-Tam could not attend his investiture… because he had Covid!

JVT, a fan of Boston United, likened the vaccination programme to defensive football players whose job it was to ‘watch everybody’s back’.

At a Downing Street press conference he said: ‘A bit like a football game where the strikers who score the wonder goals are the ones who make the headlines, actually, the hard yards are done by the defenders and by the defensive midfielders tracking back, tracking back for 90 minutes of the whole game, watching everybody’s back.

‘This is what it’s going to be about now, tracking back and making sure that we finish the job properly in the phase one cohorts before we move on.’

He compared the pandemic to the Aintree horse race when he warned Britain could not fall at the final fence.

‘The vaccine effects are going to take three months until we see them properly, and until then no-one can relax,’ he told The Sun.

‘We are probably in the last few furlongs of this race – like in the Grand National. We just have a couple more fences, we have just got to stick with it.’

Football is a common tool used by JVT to explain Britain’s progress through the coronavirus pandemic.

He once described the development of the Pfizer vaccine to reaching the penalties at the end of the play-off final.

‘So this is like… getting to the end of the play-off final, it’s gone to penalties, the first player goes up and scores a goal.

‘You haven’t won the cup yet, but what it does is, it tells you that the goalkeeper can be beaten.’

The progress of the vaccine rollout has been compared to different forms of transport, including a plane coming in to land.

JVT said: ‘Do I believe that we are now on the glide path to landing this plane? Yes I do.

‘Do I accept that sometimes when you are on the glide path, you can have a side wind and the landing is not totally straightforward, totally textbook? Of course.’

JVT said the pandemic was like waiting on a platform for a train, with the lights ‘a long way off’.

He said: ‘This to me is like a train journey, it’s wet, it’s windy, it’s horrible.

‘Two miles down the tracks, two lights appear and it’s the train and it’s a long way off and we’re at that point at the moment. That’s the efficacy result.

‘Then we hope the train slows down safely to get into the station, that’s the safety data, and then the train stops.

‘And at that point, the doors don’t open, the guard has to make sure it’s safe to open the doors. That’s the MHRA, that’s the regulator.’

He said the train was the vaccine, and he hoped when it was ready there would not be ‘an unholy scramble for the seats’.

‘The JCVI has very clearly said which people need the seats most and they are the ones who should get on the train first.’

JVT said Britons needed to avoid getting a ‘red card’ from the Omicron coronavirus variant by getting a booster jab.

He said: ‘Omicron is like now picking up a couple of yellow cards to key players on top. We may be OK but we’re kind of starting to feel at risk that we might go down to 10 players and if that happens – or it’s a risk that’s going to happen – then we need everyone on the pitch to up their game in the meantime.

When explaining the extreme temperature the coronavirus vaccine must be stored at, JVT said it was not like a yogurt.

He added: ‘This is a complex product. It’s not a yoghurt that can be taken out of the fridge and put back in multiple times.’

And other famous moments…

When he ripped off his shirt 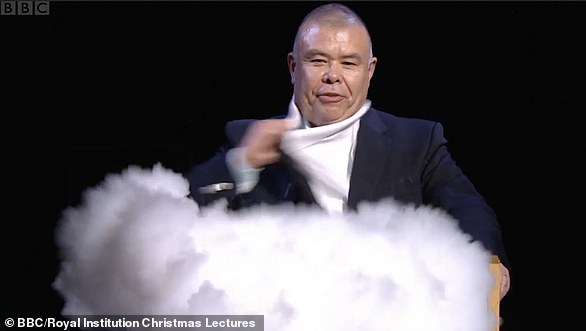 The professor proceeded to rip off his shirt and tie, disappearing into a cloud of smoke

Professor Van-Tam was hosting the Royal Institution Christmas Lectures on BBC Four when he ripped off his shirt and tie, disappeared into a cloud of smoke – and reemerged in slightly less formal attire, wearing a more casual blue shirt underneath his jacket.

When he dealt calmly with an anti-vaxxer

JVT stayed completely calm and responded politely to an anti-vaxxer who screamed abuse at him in Westminster last June.

Geza Tarjanyi, 60, of Leyland, Lancashire, targeted the Deputy Chief Medical Officer as he walked into the Ministry of Defence building.

He said: ‘Are you Van-Tam, aren’t ya? What was really in that needle that you put into Matt Hancock? Why are you continually lying to the British people? Why are you smiling? This country’s supposed to be in the worst pandemic of all time.’

Professor Van-Tam politely replied: ‘It is.’ And when, following another torrent of abuse, the anti-vaxxer asked JVT if he was listening, the expert said: ‘What? I’m finding it difficult.’