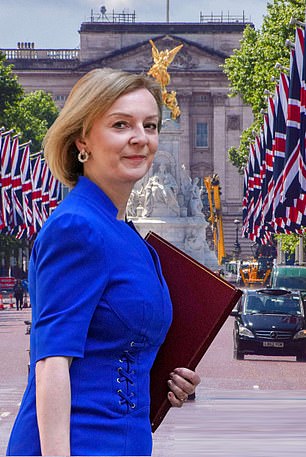 Investors are braced for another month of falling economic output as the Jubilee Bank Holiday took its toll on June’s data.

Traders were given a brief respite last month from the gloom which has gripped the UK, as it emerged the economy bounced back to growth in May following two months of contraction.

But as the Office for National Statistics prepares to release June’s figures on Friday, the clouds are likely to descend again.

Economists polled by Reuters expect output to have shrunk by 1.3 per cent, compared to 0.5 per cent growth a month earlier.

While families may have enjoyed the extra day off afforded by the Queen’s Platinum Jubilee, on top of the late May Bank Holiday which was moved to early June, the breaks took their toll on the economy as businesses closed their doors.

With the Bank of England warning that the economy will tumble into a recession from the fourth quarter of the year, this lacklustre performance will pile pressure on the next prime minister to turn Britain’s fortunes around.

But while some economists have struck a downbeat tone, other experts claim a recession is far from inevitable. Sir Nigel Wilson, chief executive of pensions and savings giant Legal & General, said: ‘Is it possible to avoid a recession? Yes. Part of it’s just maths, if you can actually spend more, invest more and get on with it quickly.’ He said the Government should simplify and streamline planning rules, which at the moment slowed down investment.

Tory leadership hopeful Liz Truss has also denied that a recession is nailed-on. Following Threadneedle Street’s bleak economic forecasts last Thursday, she said: ‘What the Bank of England have said is of course extremely worrying, but it is not inevitable. We can change the outcome and we can make it more likely that the economy grows.’

Ruth Gregory, of consultancy Capital Economics, conceded that a big part of the 1.3 per cent contraction she is expecting in June will be down to the extra Bank Holiday.

On previous occasions, she pointed out, it seemed as though extra summer Bank Holidays had knocked around 1 percentage point off growth.

‘But we still think a recession is on the way,’ Gregory said.

‘The rise in consumer price inflation will reduce people’s real income and means a recession is now likely.’

Unlike the Bank of England, however, which is expecting a downturn lasting five quarters wiping 2.2 per cent off the economy from peak to trough, Capital Economics thinks the recession will be shorter and shallower. In fact, it thinks the slump has already begun in the second quarter of this year, as it estimates output has fallen by 0.2 per cent. It will last for four quarters, Gregory estimates, shaving 1pc off the economy from peak to trough.

An emergency Budget, as promised by Truss, could also help if there is ‘targeted spending for households that really need it’, Gregory added.

Other economists are even more despondent than the Bank of England and governor Andrew Bailey. Christopher Dembik, an analyst at Denmark’s Saxo Bank, said the ‘worst is yet to come’ for Britain and predicted a ‘long and deep’ recession. Pointing to dropping car sales, higher inflation and ‘obscene energy bills’, he said Britain was starting to ‘look like an emerging market country’.

But Julian Jessop, an economics fellow at the Institute of Economic Affairs, dismissed the suggestion as ‘ridiculous’.

He said: ‘The same issues are affecting almost every Western economy. The idea that this level of uncertainty is anything like what it would take for us to become an emerging market is ridiculous.’