Julianne Hough revealed on social media on Tuesday that she has tested positive for coronavirus.

The 33-year-old entertainer posted an announcement on her Instagram Stories for her roughly 5 million followers to update her health status.

‘Hi everyone, I’m really bummed to share that I have tested positive for COVID,’ she posted. 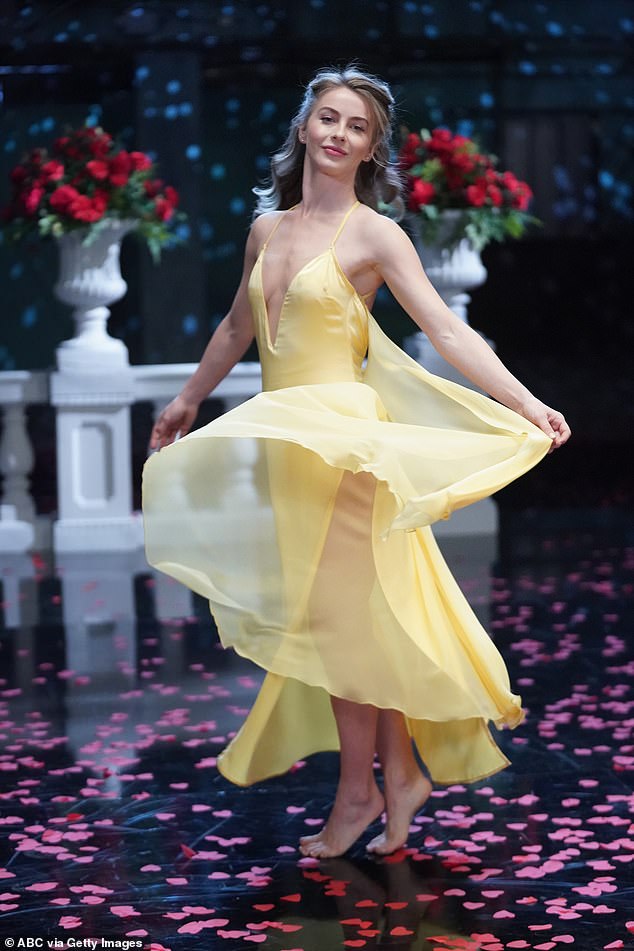 Tested positive: Julianne Hough, shown last month, revealed on social media on Tuesday that she has tested positive for coronavirus

‘I am feeling okay, but unfortunately need to miss a few POTUS shows,’ she added referencing her Broadway show.

‘Out of an abundance of caution, I’ll be quarantining until I get the safe sign-off to return. Can’t wait for everyone to see our incredible show! Julianne xoxo,’ Julianne concluded.

Julianne recently started a ‘new chapter’ in her life following her divorce from Brooks Laich that was just finalized. 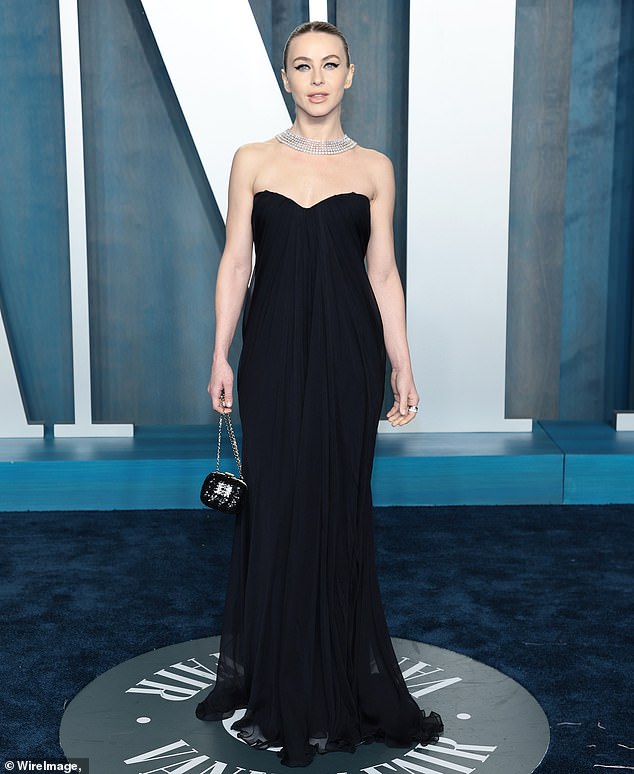 She celebrated her first night in her New York City home on Monday in an Instagram post that showed her sitting by a fireplace with a bottle of wine next to her.

‘NYC living – first night in my house I had to get a locksmith at 2am, no furniture, drinking my wine @freshvinewine out of my one coffee mug and loving every minute! This is the spot where I contemplate my life and this next chapter,’ she wrote in the caption.

‘The cool part is I have been so blessed to live the life of my dreams, have family, old and new friends in my life that mutually show up for each other, and have a new sense of wonder in my eyes and heart, that this empty house feels completely full!,’ Julianne added. 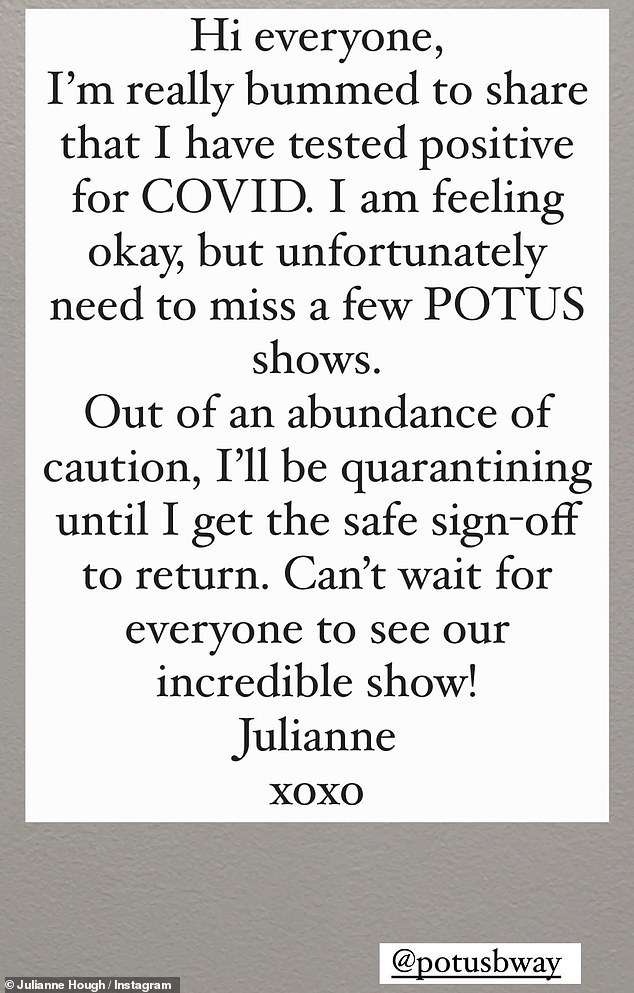 Really bummed: ‘Hi everyone, I’m really bummed to share that I have tested positive for COVID,’ Julianne posted

Julianne and former pro hockey player Brooks started dating in 2014 and revealed their engagement in August 2015 on Instagram.

They got married in July 2017 and lived together in Los Angeles before splitting in May 2020. 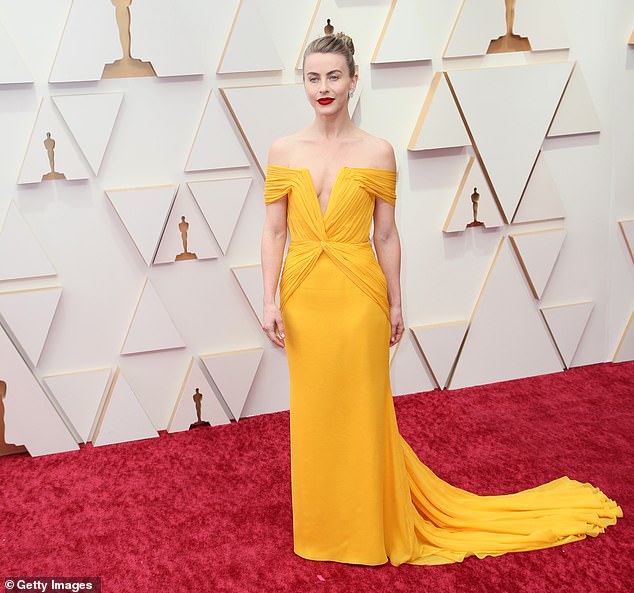 New chapter: Julianne, shown last month in Hollywood, recently started a ‘new chapter’ in her life following her divorce from Brooks Laich that was just finalized

The Broadway show ‘POTUS: Or, Behind Every Great Dumbass Are Seven Women Trying to Keep Him Alive’ centers around a public relations crisis at the White House with seven female staffers trying to keep the President out of trouble.

The show’s first preview was last Friday and it will officially open on Broadway next week. 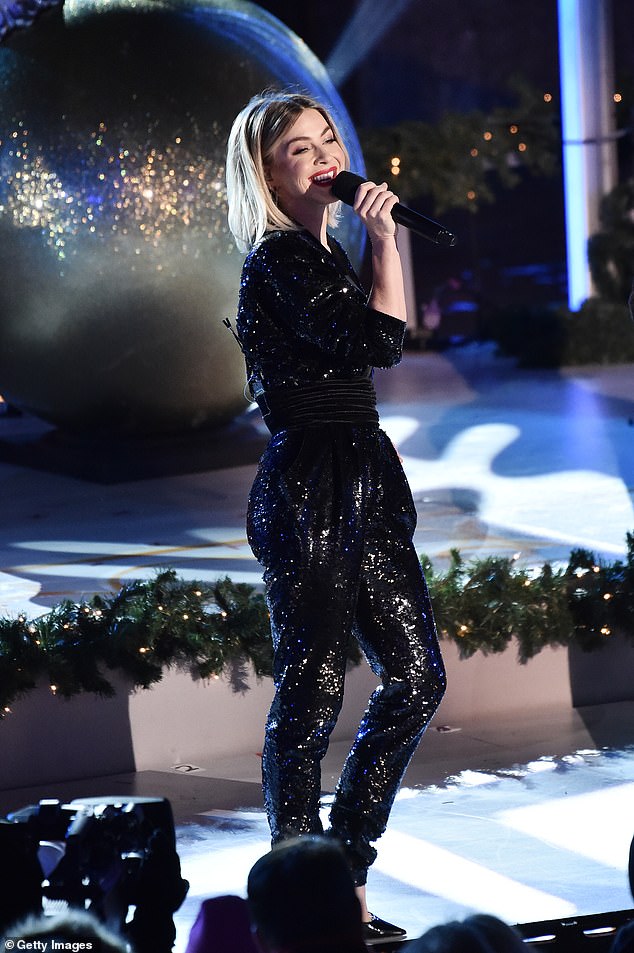 Broadway star: The Utah native, shown in December 2019 in New York City, has a starring role in the Broadway show POTUS that will officially open next week