Just Stop Oil activist: 'We may be alienating people but this is needed'

Environmental campaigners on Thursday caused rush-hour chaos in West London after activists clambered on to an oil tanker and forced the closure of a major roundabout leading to the start of the M4 motorway. Images posted to social media showed four protesters glued to the top of an Eddie Stobart field tanker at the junction, which feeds traffic from West London on and off the M4. Flags that read “Just Stop Oil” (JSO) draped off the side of the lorry.

JSO is a youth-led coalition of groups working together to ensure the Government commits to halting new fossil fuel licensing and production.

The group’s members largely come from Extinction Rebellion and Insulate Britain, and have adopted the same direct action-style protests, which seek to cause mass disruption using civil disobedience.

This kind of protest — as seen in West London — often halts people trying to get to work, stops parents getting their children to school, and can hinder ambulances in their attempts to take patients to a hospital.

JSO’s members acknowledge that their actions will disrupt the daily lives of ordinary people.

But, for those like Neil Rothnie, 69, a retired offshore oil and gas worker from Glasgow and one of JSO’s activists, disrupting the lives of a few people is a small price to pay for trying to save the planet’s future.

“But remember this: this action is limited in time, the kind of destruction that we’re drawing attention to, we’re amplifying an alarm here, and the alarm is coming from the IPCC (Intergovernmental Panel on Climate Change) and the IEA (International Energy Agency). 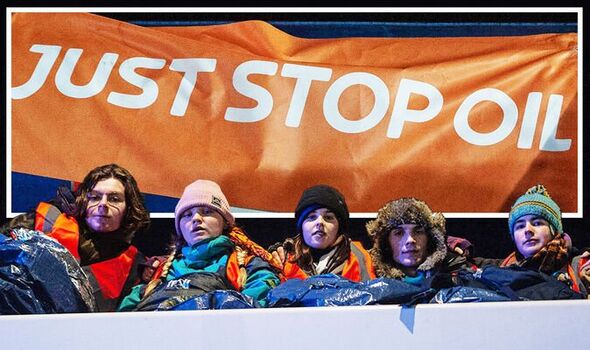 “They’re telling us that unless we stop oil soon we’re going to miss 1.5℃ cap, and so they’re talking about a significant temperature increase globally.

“That is devastating: that means in some areas you’ll have huge increases in temperature, three degrees is the average, but that includes vast regions, from the middle of the Pacific Ocean to the middle of Africa.

“The sort of disruption JSO is doing is nothing compared with the warning from these bodies that we are amplifying.

“Will some people be alienated? Yes, in the short term; but many people will understand and accept this if it’s explained to them.”

JUST IN: Teacher sacked after 30 years ‘devastated’ as she loses appeal

Disturbance: Louis McKechnie, 21, went viral after zip-tying his neck to the goalpost at Everton (Image: GETTY)

Since the beginning of April, JSO has taken action at 11 fuel terminals in England.

While petrol retailers have said the protests are “not having a serious impact on deliveries” there have been “dozens” of local reports of pumps “running dry”.

Almost 350 protesters have been arrested since the group started taking action this month.

The conjunction bans anyone from damaging the land at its sites or “affixing themselves to any other person or object” after the firm’s Warwickshire terminal had been the site of protests, which invoked 32 arrests over the weekend.

Express.co.uk also spoke to JSO activist Hannah Hunt, 23, a university student, who said the group were aware they were causing disruption, but that it was not what many of its members wanted to be doing.

She said: “As a 23-year-old, this isn’t what I want to spend my time doing. I have friends, I have plans, I have a degree I want to finish.

Extinction Rebellion: Like other activist groups, JSO members have glued themselves to objects (Image: GETTY)

Youth-led: JSO is largely led by a youth movement, although there is no hierarchical structure (Image: GETTY)

“But direct action is our only choice left if we’re to prevent an imminent climate catastrophe.

“There is a need to cause disruption when the Government is silent, which is in itself complicit in the death of our children, and supports the industries that will kill millions.

“So yes, while it’s disruptive, none of this disruption would be necessary if the Government was taking the actions that they have been elected to do.”

Much of JSO’s work appears to have been misinterpreted following a slew of broadcast interviews of members, including by Richard Madeley of Good Morning Britain who spoke to 20-year-old activist Miranda Whelehan.

While the group’s name embodies its goal — to stop oil — it says it knows it is not viable to pull the plug on oil and gas overnight.

Rather, it wants the Government to put an immediate end to all new fossil fuel supply projects, urging No 10 to “make a statement that it will immediately halt all future licensing and consents for the exploration, development and production of fossil fuels in the UK”.

They believe that transitioning away from — not instantly stopping — fossil fuels will “help cut energy bills and help us meet our international climate obligations”.

A message on the group’s crowdfunding page reads: “Allowing the extraction of new oil and gas resources in the UK is an obscene, genocidal policy that will kill our children and condemn humanity to oblivion — it just has to stop.”

Members consistently refer to the IPCC’s report that found that many of the impacts of global warming are now simply “irreversible”.

Oil tankers: Many activists have climbed on top of oil tankers to stop them delivering their goods (Image: GETTY)

The latest study found that over 40 percent of the world’s population are “highly vulnerable” to climate change.

The only hope lies in curbing temperature rise below 1.5℃ — this would, the IPCC says, reduce projected losses.

Professor Debra Roberts, co-chair of the IPCC, told the BBC in February: “Our report clearly indicates that places where people live and work may cease to exist, that ecosystems and species that we’ve all grown up with and that are central to our cultures and inform our languages may disappear.

“So this is really a key moment. Our report points out very clearly, this is the decade of action, if we are going to turn things around.”