She’s a globetrotting supermodel with a resume stacked with runway appearances after following in her famous mother’s footsteps to become a worldwide superstar.

And Kaia Gerber appeared to be keeping up with a low key day as she left the gym with a handful of goodies in New York on Friday afternoon.

The 20-year-old model was kitted out in black leggings, sneakers and an oversized navy blue fleece jacket as she juggled a few things in her hands. 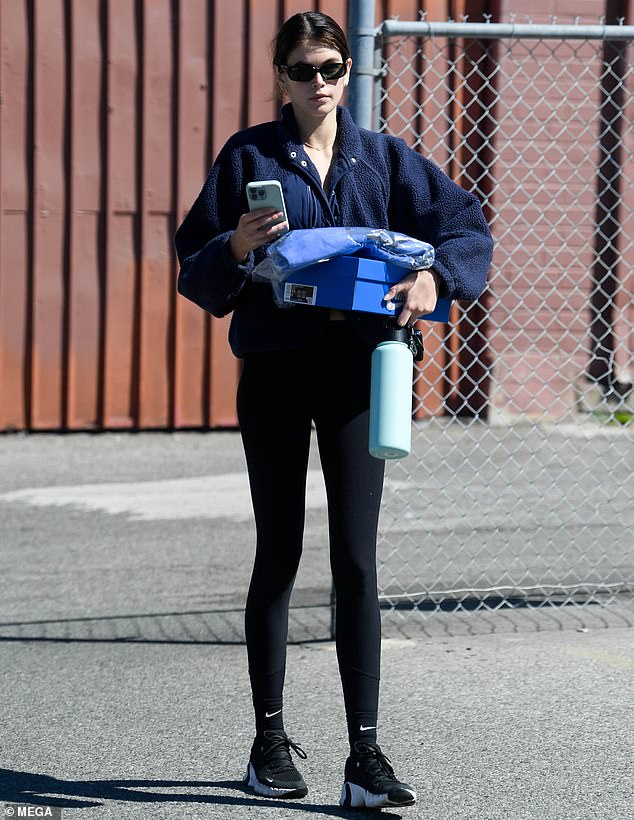 No sweat! Kaia Gerber appeared to be keeping up with a low-key day as she left the gym carrying a handful of goodies in New York on Friday afternoon

She appeared to be makeup-free and wore square black sunglasses to protect her eyes from the sun.

The American Horror Stories actress easily juggled her phone and water bottle as she carried a blue shoe box and a bag of clothes.

Kaia works out often and has shared details of her routine in the past, which includes Pilates, balance work and kettle balls.  She is often spotted hiking, as well. 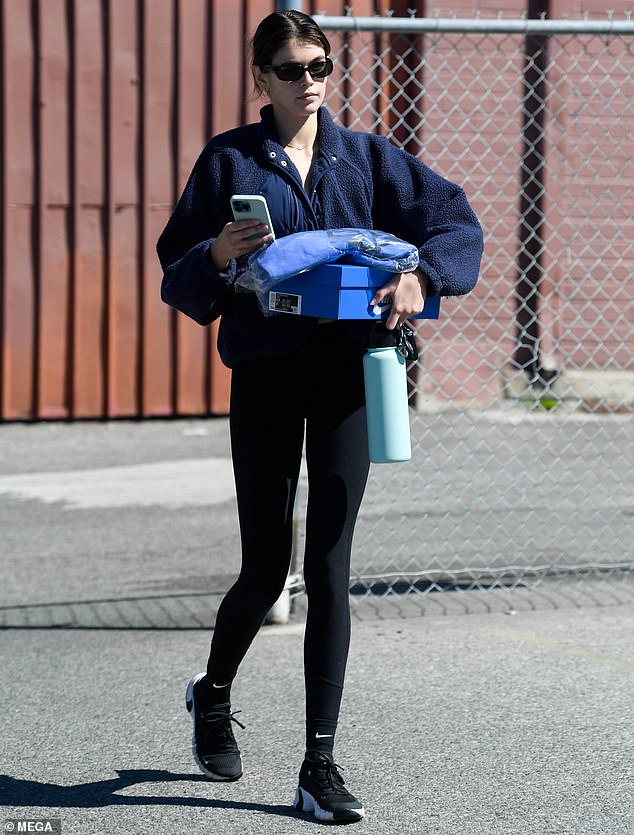 Casual day: The 20-year-old model was kitted out in black leggings, sneakers and an oversized navy blue fleece jacket as she juggled a few things in her hands 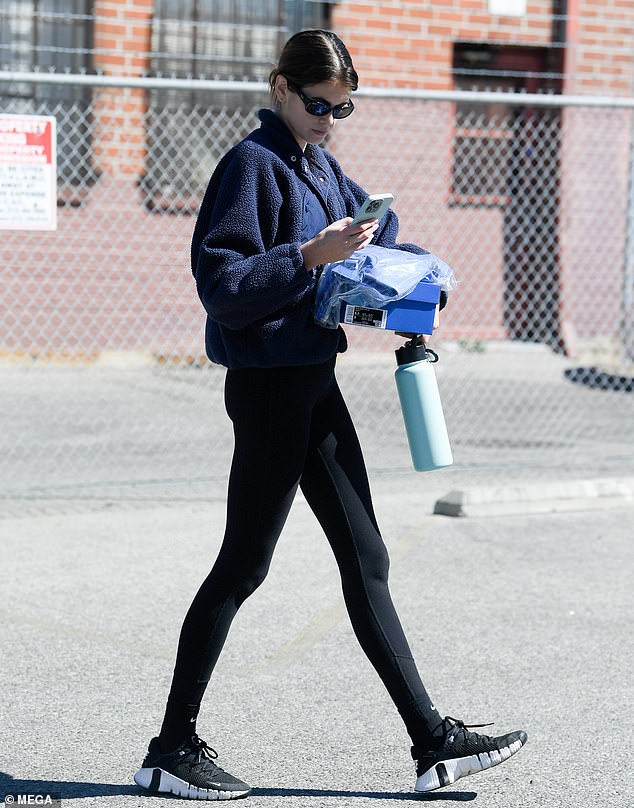 Natural beauty: She appeared to be makeup-free and wore square black sunglasses to protect her eyes from the sun

Gerber split with Jacob Elordi last year and has recently been spotted around town with Vanessa Hudgens ex, Austin Butler.

The runway veteran has been modelling professionally since she was 10, but doesn’t seem to take herself too seriously.

She had high praise for the team who made it all happen writing, ‘@alexandermcqueen by the visionary #sarahburton and styled by #camillanickerson. always so honored and humbled to work with this team. the true definition of leading by example with kindness, compassion, and the utmost attention to detail – all very evident in their creations. thank you for being such a breath of fresh air.’ 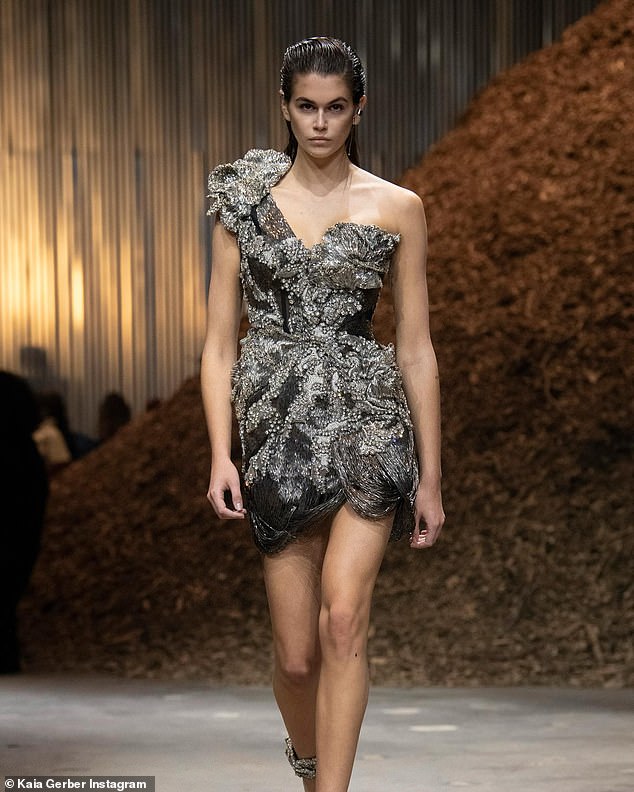 Runway ready:  The 20-year-old model posted this picture from her recent walk in the Alexander McQueen show on her Instagram account.  Kaia, who got her first job at age 10, had high praise for the team who brought the show together

Fans who scrolled to the fourth slide on the post can see a distorted headshot that received a lot of comments, including one from mom Cindy Crawford who seemed to enjoy the joke posting, ‘The last pic!’ next to a laughing emoji.

Fellow model Fran Summers called it a ‘big brain baby’ along with a smiling heart emoji.

The 5’8′ Kaia has kept busy in the 2022 Fashion Week season walking in New York, Paris and Milan, but has said the pandemic has made her re-evaluate her life and career.

In an interview with People, she said she thinks twice before jetting off to different locations for work.

‘I think the most fashionable thing is being responsible. It’s definitely a group effort, and I think that it’s kind of making people realize how everyone is in it together, and everyone’s decisions affect the world so much more globally than we ever believe to be true,’ she said. 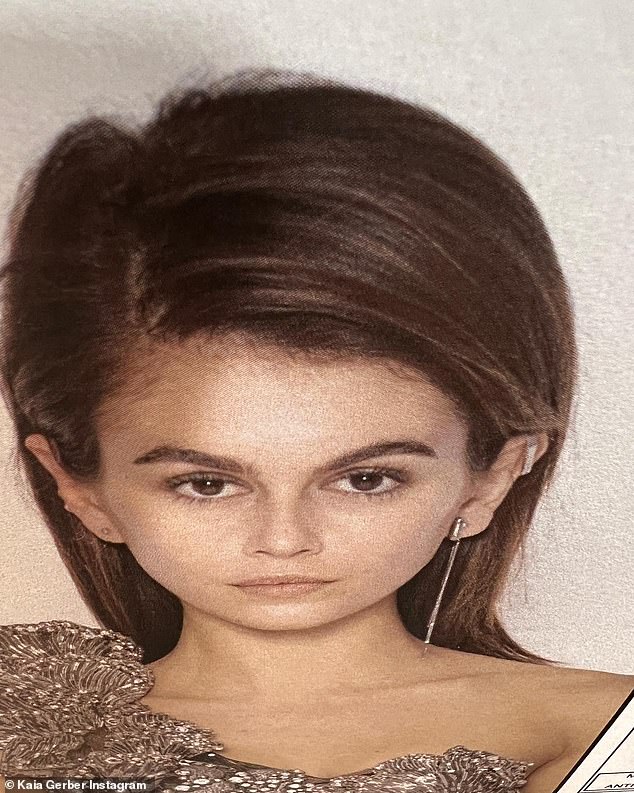 Self-deprecating:  The model who has graced the covers of magazines all over the world poked a little fun at herself in this distorted headshot on Instagram.  The picture got a big laugh from her mom, supermodel Cindy Crawford