Karren Brady’s daughter Sophia Peschisolido has got engaged to her boyfriend Frankie Makin.

The model, 25, shared a gallery of images from the romantic proposal at a beach in Mykonos, Greece as her love got down on one knee.

The snaps showed Frankie presenting her with a huge diamond ring as Sophia looked overjoyed in the moment, covering both hands over her mouth in shock. 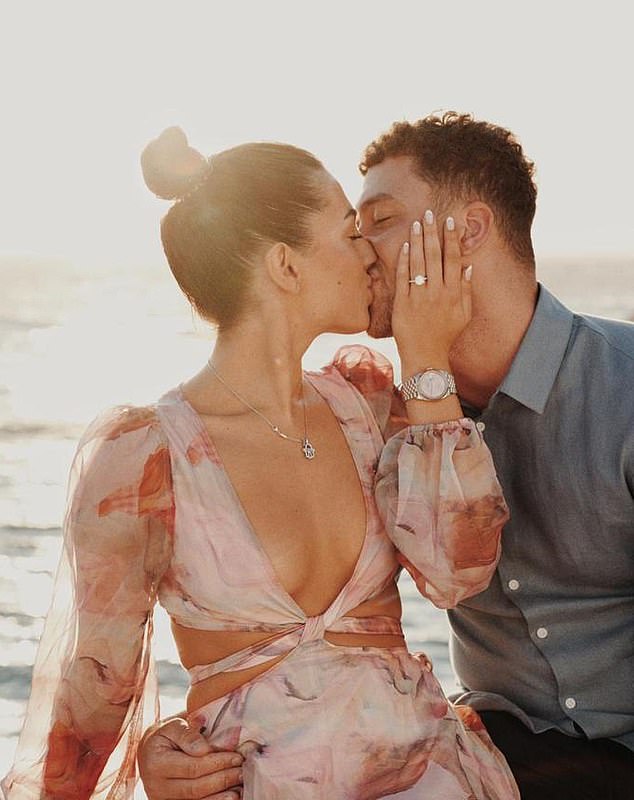 She wrote alongside the pictures: ‘I can’t wait to be with you forever and ever, you’re stuck with me now.

‘I’m so lucky to have you, my soul mate @frankiemakin I love you so much, I can’t believe I woke up a fiancé I’m still in shock!!’

Sophia actually sparked speculation she was already married to Frankie Makin back in October last year when she was taking part in an Instagram Q&A.

A fan had asked her:  ‘does it matter if you’re not married living with your boyfriend in Dubai?’

She responded: ‘Who said we weren’t married?’ and shared a brief clip of her hand with a diamond ring on her wedding finger.

In November 2020, the UAE put a stop to the criminalisation of sex out of wedlock, making sex outside of marriage legal.

Unmarried couple are also now allowed to live together in the same house or room.

Holidaymakers have to be extra careful about where they stay with partners- as foreigners can allegedly be arrested for having a sexual relationship inside their own hotel room.

Speaking of her move to Dubai, she wrote: ‘Yeah we are loving every minute thank you!!! We were basically renting in London and when our lease ran out we decided we would rather live somewhere hot.’

‘We are young and we love travelling and we are both lucky enough that we can work out here. This is also where we first met and mine and @frankiemakin favourite place so we thought f*** it’.

‘Not permanently no, trying 6 months but if we like it here we’re gonna stay for a year.’