Kate Middleton ‘did her research’ before joining royals says expert

Kate and Prince William have created an equal and loving partnership during their decade-long marriage. However, similarly to any other couple, they don’t always see eye to eye, which can lead to “heated exchanges from time to time”, according to royal expert Robert Jobson. The royal expert reported claims the Duke of Cambridge has “a notably short fuse” in private and frustration or concerns over issues regarding his family can lead his “fiery temper” to erupt.

Kate, who first William met in 2001 at St Andrews University when they both undertook a four-year bachelor’s degree, is widely tipped to have a calming influence over her husband and to have helped him mature over the years.

Nevertheless, she can get involved in heated discussions with William from time to time, Mr Jobson wrote in his upcoming new book William at 40: The Making of a Modern Monarch.

In an extract from the book, Mr Jobson reported a source described as a close aide saying of Prince William: “He can be a bit of a shouter when he loses it.”

They added: “It’s fair to say the Duke and the Duchess give as good as they get if their disagreement results in raised voices. 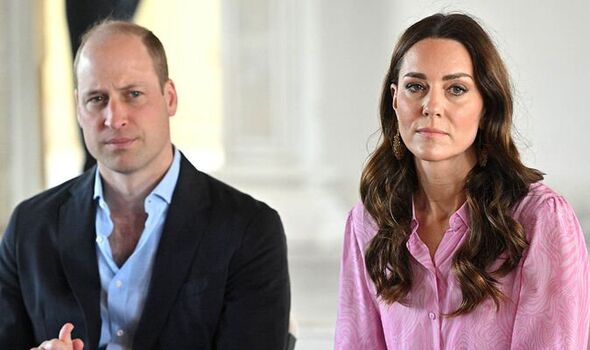 Kate and William can get into the ‘occasional blistering row’, an author claimed (Image: GETTU)

“But they know each other so well, it usually blows over quickly – and she is, on the whole, a major calming influence on him”.

Mr Jobson went on claiming Kate’s roots have helped keep the Duke of Cambridge “grounded” and gave him a taste of the normal world outside of palace walls.

Mr Jobson wrote: “When they lived together for three years before their marriage, for instance, she did all the cooking and employed no domestic help.

“Even now, she shares the morning school run with William.

Kate and Prince William on their wedding day (Image: GETTY)

“It’s also largely down to Catherine that William has changed his view of the media, accepting that the Royal Family rely on it for their existence.

“That’s why the birthdays of their children are marked with photos – frequently taken by the Duchess of Cambridge herself – and they’re often photographed at public events.

“As the couple approach their 11th wedding anniversary next Friday, friends say the key to the marriage’s success is that it’s an equal partnership – even if that involves the occasional blistering row.”

One friend of the couple is reported by Mr Jobson saying: “They’ve got a solid relationship and she gives him confidence.

“There is no jealousy, no friction – they are happy for each other’s successes.”

They also released a brief video in which they could be seen sharing an intimate moment near a campfire as well as running on the beach near their Norfolk home and playing with their three children – Prince George, Princess Charlotte and Prince Louis.

Despite being fiercely private, Kate and William have shown glimpses of their relationship over the years while carrying out engagements.

Kate and Prince William got married in 2011 (Image: EXPRESS)

In particular, they have shown to share a sense of humour, as they often poke fun at one another in public.

During a charity dinner in Norfolk in 2016, Kate told the chefs her husband had to “put up with my cooking most of the time”.

Last year, it was reported the Duchess joked about Prince William’s promise made to Good Morning Britain’s Sean Fletcher to one day run a marathon in Kenya.

The TV host said she replied: “I’ll believe it when I see it”.

The Duke and Duchess – who will one day become King and Queen Consort – have become increasingly prominent within the Firm over the years, taking on a greater share of duties and patronages.

Prince William started to fully dedicate his attention and work to serving the Crown in the summer of 2017 when he left his job as an air ambulance pilot at East Anglian Air Ambulance.

His royal work is focused in particular on mental health, conservation and the environment.

The second in line to the throne launched in 2020 a decade-long initiative, the Earthshot Prize, which is set to award a total of £50million to 50 organisations, individuals or nations submitting workable solutions to the planet’s five major environmental challenges.

During the same year, Kate also made clear what her long-life focus will be as she took part in a series of initiatives that led to the launch in June 2021 of the Royal Foundation Centre for Early Childhood.

Kate worked behind the scenes with experts in the early years field for years to learn more about the impact experiences made in the first five years of life can have on the development of children.