Harry and Meghan star in trailer for Netflix documentary

Royal commentators said it had been “deliberately designed” to “take away” from the Cambridges’ landmark tour. The Netflix release hit the Prince and Princes of Wales with a double whammy, threatening to derail the second day of their high-profile visit to Boston in the United States, which has already been overshadowed by a palace race row back in London.

In a one-minute teaser, featuring pictures of Meghan apparently, in tears and Kate looking daggers drawn, the Duke and Duchess of Sussex threatened to undermine the biggest royal overseas visit since the death of the Queen.

Royal expert Richard Fitzwilliams said that the trailer’s release was “obviously timed to take away from the Wales’ trip to Boston,” adding that Meghan and Harry “like control their narrative.”

Royal author Phil Dampier told the Express: “It’s obvious that Harry and Meghan released the trailer for their Netflix show in a deliberate attempt to overshadow William and Kate’s visit to Boston.”

The six-part documentary series, which is expected to air from December 8 – exactly three months after Queen Elizabeth’s death – promises to tell Harry and Meghan’s love story and their battles with their family and the institution of monarchy very much from their own point of view.

Harry, 38, and Meghan, 41, have given unprecedented behind-the-scenes access to the makers of the Netflix docuseries, despite their well-publicised pleas for privacy and their initial denials that they were making any such series.

The trailer released on Thursday features intimate private photographs. In one section of the footage, Meghan appears to be wiping away tears with both hands as they stream down her face, while Harry sits and tilts his head right back, seemingly in distress. 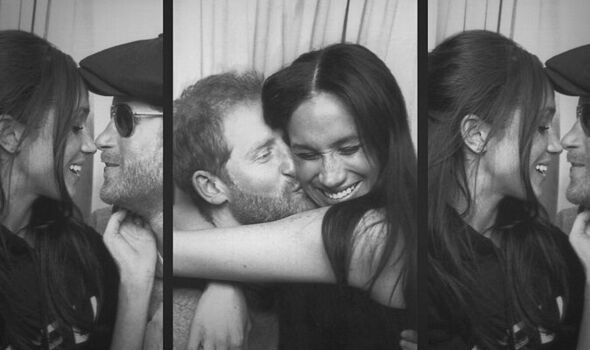 The trailer’s release timing is understood to have infuriated palace officials (Image: Duke and Duchess of Sussex/Netflix/PA)

The couple are heard being asked: “Why did you want to make this documentary?”

Harry says “No one sees what’s happening behind closed doors… I had to do everything I could to protect my family.”

Meghan, meanwhile, issues a come-on to viewers, saying, “When the stakes were this high, doesn’t it make more sense to hear our story from us?”

The American former actress is also pictured with her hand over her face, appearing to be in tears, as she sits cross-legged on a chair holding a phone, although the image does not make it clear.

It is not unusual for a television company to begin promoting a series with trailers a week before it airs but the timing is understood to have infuriated palace officials. Royal watchers and former aides saw it as a deliberate attempt to sink William and Kate’s US trip.

Mr Fitzwilliams, a seasoned royal commentator, pointed to the clash with the royal visit to Boston but insisted courtiers were helpless to stop it. “It obviously looks deplorable but there is nothing they can do about it,” he said.

He said the palace faced a series of public relations battles after already suffering a hit from The Crown, which many Americans believe to be true despite it being a work of fiction only loosely based on historical events.

On December 6 Harry and Meghan are travelling to New York to collect the Robert F Kennedy Ripple of Hope Award for allegedly standing up to “structural racism inside the Royal Family and wider monarchy. Then comes the Netflix series before Harry’s upcoming memoir, Spare, due to be published in January.

There are happy snapshots of the Sussexes kissing (Image: Duke and Duchess of Sussex/Netflix/PA)

In London and Boston, palace officials declined to say anything publicly about the Netflix trailer on Thursday beyond a senior aide to William and Kate insisting: “We won’t be distracted by other things this week.”

But there is likely to have been frustration that the timing could not have been changed to avoid clashing with the royal visit to the US, where William and Kate are seeking to promote the Earthshot Prize Awards for innovation tackling climate change and other environmental disasters facing the world.

In October 2019, the couple and their staff were furious when ITV released incendiary trailers for a documentary on Harry and Meghan in Africa while the then Duke and Duchess of Cambridge were on a tour of Pakistan.

When they were part of the working Royal Family, Harry and Meghan were constantly frustrated that their more junior ranking within the Firm meant they had to fit in with the plans of the Queen, Charles and Camilla, and William and Kate. They played fourth fiddle and were asked to ensure that they did not make any announcements or do anything to overshadow the more senior royals.

But since breaking free and quitting their senior royal roles in March 2020, they have had no such worries, despite vowing to uphold the values of the then Queen.

On the first day of William and Kate’s visit to Boston on Wednesday, they released pictures of themselves playing table tennis. But Thursday’s release was in a different league.

The royal visit to Boston has been widely seen as an attempt by William and Kate to reset the Royal Family’s reputation in the US. It has been portrayed as an effort to win over the hearts and minds of the American public amid lingering but reducing sympathy for the Sussexes as media coverage and polls have suggested the US public is tiring of their continual complaints about the Windsors.

But the Sussexes and their allegations of racism inside the Royal Family and the wider institution have been given fresh ammunition by the controversy over the resignation of Lady Susan Hussey, a senior courtier and lady-in-waiting for 62 years, over remarks she made to a black woman domestic violence campaigner at a Buckingham Palace reception.

The Netflix trailer features images of William and Kate with Harry and Meghan at the Commonwealth Day service in 2019 – the year before the Sussexes final public royal engagement at the same event – and shows Kate looking cross.

Also, there are happy snapshots of the Sussexes kissing while Meghan sits on a kitchen island, as newlyweds dancing with joy at their evening wedding do, cuddling in a photobooth and Meghan cradling her bump while pregnant.

Billed as a Netflix Global Event, the streaming giant promised an “unprecedented and in-depth documentary series” over six episodes where Harry and Meghan “share the other side of their high-profile love story”.

It added it was a “never-before-seen look at one of the most-discussed couples in history”.

Netflix said the show “explores the clandestine days of their early courtship and the challenges that led to them feeling forced to step back from their full-time roles in the institution”.

It features commentary from friends and family, most of whom have never spoken publicly before about what they witnessed according to Netflix, and historians who discuss the state of the British Commonwealth today and the Royal Family’s relationship with the press.

It adds: “The series does more than illuminate one couple’s love story, it paints a picture of our world and how we treat each other.”

Harry and Meghan signed lucrative deals – thought to be worth around £88 million – with Netflix and Spotify after quitting the monarchy and moving to the US. The couple, who told their story in a television interview with Oprah Winfrey in March 2021, had previously denied making a documentary series. – or at least what was initially described as a reality TV series about their lives.

In September 2020 when it was first reported that they were working with Netflix on the series, the couple’s office insisted Harry and Meghan were “not taking part in any reality shows” and said the only programmes in development were a nature docu-series and an animated series celebrating inspiring women that they had previously announced.

It’s obvious that Harry and Meghan released the trailer for their Netflix show in a deliberate attempt to overshadow William and Kate’s visit to Boston.

They could barely disguise their intent after journalist Omid Scobie, their chosen cheerleader tweeted: “If tomorrow is William’s Super Bowl, here’s the halftime show.”

Shot partly in black and white, with atmospheric mood music and glossy photos of domestic bliss, the couple are painting themselves as happily removed from their imprisoned past.

But sadly this all indicates the rift between the brothers is getting much worse with no reconciliation in sight.

Any hopes that they will put aside their differences for the sake of family unity are disappearing fast.

The appearance of the so-called “Fab Four” on a walkabout in Windsor after the Queen’s death was clearly cosmetic, and it’s becoming clear that the late monarch was very much the glue holding everything together.

With her gone, the gloves are off and I see no end to this bitter feud soon.

With Meghan seemingly in tears and talking of “high stakes” and Harry saying he had to do everything to protect his family, it seems the Sussexes will continue to claim they were driven out of the royal family by racism, press intrusion and outdated values.

I don’t believe any of that was true but – fuelled by big money deals – they seemingly have no intention of backing down and their supporters will rally around them.

I don’t believe she intended to offend anyone and she has been thrown under a bus by her own godson Prince William.

I understand William’s reasons – he wanted to act fast and return the focus to his and Kate’s visit for the Earthshot prize awards.

But having abandoned the Queen’s tactic of “never complain and never explain” I see trouble ahead.

Once you start engaging with complaints and allegations where do you stop?

What if Harry names the member of his family who allegedly asked what skin colour his son Archie would be?

If it’s the King, or Queen Camilla or Prince William, what will their reply be?

To deny it happened, try and explain what was meant or to apologise and say it won’t happen again?