On Thursday, the Duke and Duchess arrived in The Bahamas for the third and final leg of their Caribbean royal tour. Prior to this, the couple also completed a series of engagements in both Belize and Jamaica, and have encountered protests along the way.

William and Kate’s Caribbean tour, which has been billed as a royal charm offensive, has been subject to controversy as the couple faced various protests.

These included calls within Jamaica to cut ties with the Royal Family completely.

Upon arriving in Belize on Sunday, a protest by local residents forced them to cancel a trip to a village nearby.

The couple were due to visit Akte’il Ha, a cocoa farm located near the village of Indian Creek in the foothills of the Maya Mountains. 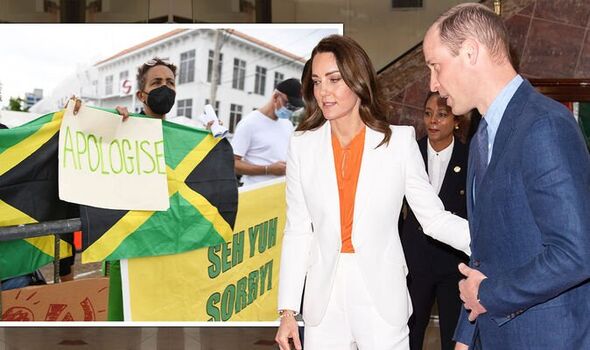 However, local residents staged an anti-colonialist demonstration and reportedly blocked the use of a football field where the Duke and Duchess of Cambridge were meant to land their helicopter.

Instead of the original farm they had planned to visit, the royal couple instead stopped by the family-run Che’il Mayan Cacao Farm and Chocolate Factory in Maya Center Village.

Ahead of their arrival in Jamaica, the second stop on their tour, a group of 100 prominent Jamaicans signed a letter seeking reparations from the British crown for “crimes against humanity.”

The letter called for an apology from the Cambridges and asked them to work to “redefine the relationship” between the British monarchy and Jamaica.

A group of Jamaican residents gathered outside the British High Commission in Kingston clutching signs which read “Apologize now!” and “Sey yuh sorry” nodding to a campaign by the Advocates Network group.

The couple were met with protests in Jamaica (Image: Getty)

Kate and Prince William during a visit to Hopkins (Image: Getty)

The organisers of the protest released a letter beforehand outlining 60 reasons for reparations, aligning with Jamaica’s 60th year of independence marked later this year, in August.

Writing for Gal-Dem.com, writer Christina Ivey made reference to one of the signs at the protest, in a piece that criticised the couple’s royal tour.

She claims the visit from the couple shows “Jamaica should have become a republic long ago”.

She added: “While it seems like the task has fallen on William and Kate’s shoulders to present a glowing image of a benevolent Royal Family, all we see is an expensive reminder of why we should have become a republic decades ago.

“As one protest sign put it, ‘​Kings, Queens and Princesses and Princes belong in fairytales, NOT in Jamaica!’”

During their visit, Jamaica’s prime minister Andrew Holness hinted at his intentions for the country to become a republic.

Kate and William at King’s House, the official residence of the Governor-General of Jamaica (Image: Getty)

Mr Holness informed the Duke and Duchess Jamaica is “moving on” in what has been interpreted as a notice the realm will soon sever its ties with the monarchy.

It appears the region is looking to follow the example of Barbados, which in November became the first nation since 1992 to remove the Queen as head of state.

It comes amid news that the Jamaican government did not foot the cost of the royal visit, despite speculation that they’d be responsible for “some costs”.

Robert Morgan, Minister without portfolio in the Office of the Prime Minister (OPM), made the admission at a post-Cabinet press briefing at the end of last month.

When asked whether Jamaica would be footing the bill for the tour, a question on the mind of several Jamaicans, he replied: “The Government doesn’t pay for royal visits.

“There are obviously going to be costs if …. a VIP is coming to your country.

“There will obviously be costs as it relates to per diem for security personnel who will be engaged to ensure safety.”

He added: “Any dignitary that comes to Jamaica, the country will obviously have to foot a cost.”

Mr Morgan went on to reiterate that “the Government will not be paying for the visit”.

Following the protests in Jamaica, Prince William delivered a speech that condemned Britain’s “abhorrent” history of slavery, echoing a similar one delivered by his father the Prince of Wales in Barbados last year.

He said: “I strongly agree with my father, The Prince of Wales, who said in Barbados last year that the appalling atrocity of slavery forever stains our history.

“I want to express my profound sorrow. Slavery was abhorrent. And it should never have happened.”

However, the Duke did not issue an apology for the Royal Family’s role in the slave trade.

Also during their visit, Mr Holness made clear his intentions for the country to become a republic.

It appears the region is looking to follow the example of Barbados, which in November became the first nation since 1992 to remove the Queen as head of state.