The 34-year-old took to his company Ella & Co’s Instagram over the weekend to share a few pictures of puppies and promote a blog post containing tips and info regarding getting a new dog shared. The Instagram post appears to feature photographs taken in 2020 at the time James’s beloved pet Luna had a litter of six cocker spaniel puppies.

And one of those dogs was later given by James to older sister Kate and her family.

It is believed Kate and William adopted one of the three black puppies Luna had.

The Duke and Duchess of Cambridge have been very careful in sharing as little news as possible regarding their new dog over the past months.

The news of a new pup was first reported in January 2021, and it is believed the pup had joined the Cambridges’ household prior to the death of their beloved dog Lupo – one of Luna’s puppy brothers. 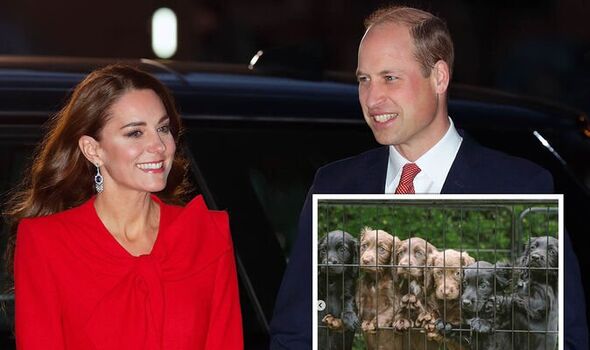 Kate and Prince William got a new puppy in 2020 (Image: GETTY/ELLA.CO INSTAGRAM )

Lupo, which featured in many family snaps and kept Kate and William company since 2012, died in November two years ago, as announced by the Cambridges in a sombre statement.

Sharing a picture of the dog on Instagram, Kate and William said at the time: “Very sadly last weekend our dear dog, Lupo, passed away.

“He has been at the heart of our family for the past nine years and we will miss him so much.”

Lupo had also been gifted to Kate and William by James, as it was one of the puppies of the entrepreneur’s dog Ella.

Kate and William haven’t shared the name of their new pet.

However, during an engagement in January, Kate let slip their dog is a girl.

During a visit to Clitheroe Community Hospital, they met a cockapoo puppy named Alfie set to be trained as a therapy dog to support patients and workers at the hospital.

While holding the excited puppy, the Duchess said: “Our dog is going to be very upset.

In his blog post, James also opened up about the first dog parents Carole and Michael Middleton brought into the family.

He said: “I was 11 when we got our first family dog, Tilly, and I remember all of the feelings of excitement and nervousness like it was yesterday!

“When I brought Ella home for the first time in 2008, all of those feelings came flooding back in an instant.

“Ella was my first dog as an adult, and I quickly discovered how much research and preparation goes into getting a dog.”

Kate and Prince William aren’t the only members of the Royal Family to love and own dogs.

The Queen has famously bred 14 generations of corgis since 1933 – all descendants from her first pet Susan.

Camilla with her rescue dog Beth during an engagement at Battersea (Image: GETTY)

Sophie, Countess of Wessex, and husband Prince Edward also own two dogs – as well as a tortoise, as they revealed in an interview last year.

After her relationship with Prince Harry blossomed, the pair adopted a labrador named Pula.