Kate blows a kiss to Prince Louis during Jubilee Pageant

Kate headed to Brent on Wednesday to visit the Little Village’s hub, the biggest network of baby banks in the capital. During a meeting with staff and some of the people who have been benefitting from the support of the charity, the Duchess was distracted by a three-month-old baby lying in a pram.

While cooing over the boy, the doting mother-of-three spoke about her youngest son Prince Louis and how much he has grown.

She said: “You forget how tiny they are, when you see their little shoes and things like that.

“I keep thinking Louis is my baby but he’s a proper boy now.”

The organisation provides struggling families with babies aged up to five with toys, clothes, nappies and other essentials. 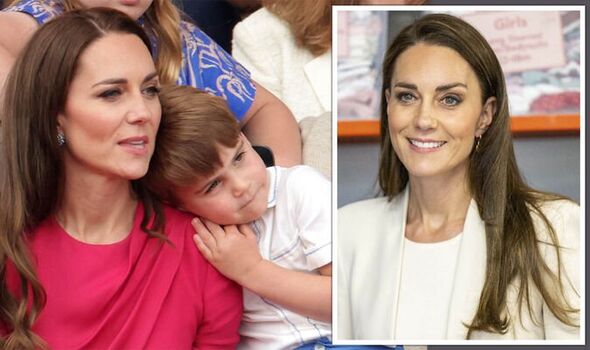 During her tour of the facility, Kate – who in February said she gets “very broody” when working with young children – learned more about what type of donations are more needed and the huge help provided by the charity.

Prince Louis stole the show last Sunday, when he sat next to his mum Kate and sister Princess Charlotte in the royal box to watch the Platinum Jubilee Pageant.

The tot was spotted chatting with his siblings and cousins Mia and Lena Tindall as well as joking with his mother.

In one video from the event, he can also be seen sticking his tongue out at Kate and putting his hand over his nose.

Prince Louis stuck his tongue out during the pageant (Image: GETTY)

But the boy was also spotted being given plenty of cuddles by his mum, who let him sit on her lap and blew him a kiss.

During the three-hour-long pageant, the fifth-in-line to the throne also joined his dad Prince William a few seats away from his own and even sat on his grandfather Prince Charles’s lap.

Mike Tindall, who was sitting right behind Kate and Louis, mentioned the tot as he recalled his attendance at a number of Jubilee events while appearing on his podcast The Good, The Bad and The Rugby.

He said: “Louis was just wanting to have fun, and my two [daughters] are always mischievous, so it was (about) trying to keep a lid on.

“There were a lot of sweets out back there, so they had complete sugar highs.

“It’s tough for them, they’re all young sitting there from two to five or whatever, it’s a long time, (and) as any parent knows you just do what needs to be done.”

During the event, Mike was caught on camera teasing Louis, gesturing to him he was keeping an eye on the boy.

Kate chuckled as she watched the scene unfolding.

Last Thursday, Louis had already gained the public’s attention as he excitedly watched the RAF flypast from the balcony of Buckingham Palace alongside her parents, the Queen and other senior royals.

The Duke and Duchess of Cambridge acknowledged their son had gained the spotlight during his public appearances in a post they shared on social media at the end of the Jubilee celebrations.

In an Instagram and Twitter message they signed off with their initials, Kate and William wrote: “What a fantastic weekend of celebrations.

“Seeing people across the nation coming together with family, friends and loved ones has been extremely special.

“Thank you everyone who turned out to show their gratitude to The Queen and her inspiring 70 years of leadership.

“From the crowds on the Mall to communities hosting street parties up and down the country, we hope you had a weekend to remember.

“We all had an incredible time, especially Louis…”