The Duke and Duchess of Cambridge are on the final leg of their eight-day visit to mark the Queen’s Platinum Jubilee year. Prince William, 39, and Kate, 40, arrived in the Bahamas after stints in Belize and Jamaica.

The royal couple travelled to the Abaco Islands, where they will hear about the impact of Hurricane Dorian on residents of the Bahamas.

The storm hit the islands back in 2019, and is widely seen as the Bahamas’ most catastrophic natural disaster.

The Duke and Duchess of Cambridge will spend time at the Daystar Evangelical Church, which was damaged during the hurricane, and hear first-hand testimony of experiences during the devastating storm.

This comes after a speech on Friday, in which Prince William hinted that any decision made by the countries the couple visited on their tour to break away from the Royal Family would be supported by the Duke and Duchess. 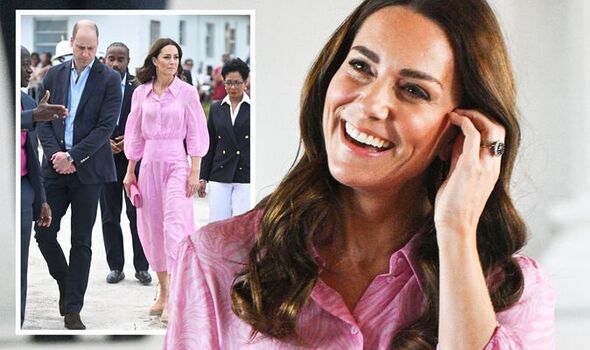 The Duke and Duchess will hear about the devastation of Hurricane Dorian (Image: Daily Express)

The future king said if Belize, Jamaica and the Bahamas voted to become republics, the choice would be met with “pride and respect” from the monarchy.

Speaking in the capital, Nassau, Prince William said the relationship between the Royal Family and the Caribbean Commonwealth states was changing.

He continued: “Next year, I know you are all looking forward to celebrating 50 years of independence – your golden anniversary.

The Duke and Duchess’s royal tour was met with significant dissent from local residents, including a protest outside the British High Commission in the Jamaican capital, Kingston.

Opal Adisa, who helped put together the protest outside the British High Commission building, joined the chorus calling for the monarchy to acknowledge and make amends for the slave trade.

She said: “The luxury and the lifestyle that they have had and that they continue to have, traipsing all over the world for free with no expense, that is a result of my great, great grandmother and grandfather, their blood and tears and sweat.”

On Wednesday, Prince William and Kate met with Jamaican Prime Minister, Andrew Holness, and his wife, who said the country was “very happy” to host the Duke and Duchess on their royal tour.

However, Mr Holness added their trip was an “opportunity for issues to be addressed” with the backdrop of vocal protests in the country’s capital ahead of the couple’s arrival.

He told the couple: “You will have seen the spectrum of expression yesterday”.

“The people are very expressive and I’m certain that you will have seen the spectrum of expression yesterday, which as you would know is unresolved.

“Your presence gives an opportunity for those issues to be placed in context, put front and centre, and to be addressed as best as we can.”

Referencing Barbados, he added Jamaica was looking to “fulfill our true ambition and destiny as an independent, developed and prosperous country”.

Barbados voted to remove the Queen as head of state in December 2021, replacing the monarch with an elected president in a ceremony attended by Prince Charles.

The Duke and Duchess also faced opposition before their arrival in Belize, the first stop of their tour, when they scrapped a visit to a local village where their helicopter was scheduled to land.

The royal couple was set to visit the Akte’il Ha cacao farm in Indian Creek, but a dispute between Flora and Fauna International – of which Prince William is a patron – and residents of the Toledo district led to the trip being axed.

Sebastian Shol, chair of Indian Creek village, told the Daily Mail: “We don’t want them to land on our land, that’s the message that we want to send.

“They could land anywhere, but not on our land.”

Then, just days after Kate and William left Belize, the country’s minister for constitutional and political reform indicated the Belizean government could push for the nation to follow in Barbados’ footsteps.

“Perhaps it is time for Belize to take the next step in truly owning our independence.

“But it is a matter that the people of Belize must decide on.”

Zuckerberg can ‘brainwash whole populations’ with ‘most dangerous invention since nukes’