But Kate Hudson and her fiancé Danny Fujikawa set their sights on their family on Tuesday night, when they went out for dinner in Los Angeles’ Pacific Palisades neighborhood with their two youngest children: Rani Fujikawa, three, and son Bingham Bellamy, 10.

The 42-year-old Almost Famous star showed off an infectious smile as she stopped to chat with some friends outside the restaurant while holding her daughter in her arms. 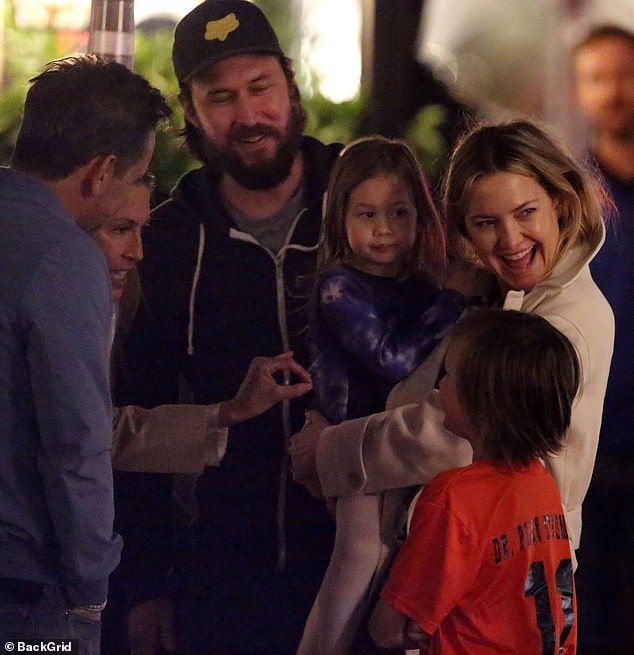 Family gathering: Kate Hudson, 42, and fiancé Danny Fujikawa, 35, were beaming ear-to-ear as they stopped to chat with some friends while taking daughter Rani Fujikawa, three, and son Bingham Bellamy, 10, to dinner in LA on Tuesday

Kate looked stylish in a classy tan trench coat with her collar popped up.

She wore a dark outfit under it and styled her dirty blond locks casually with a middle part.

Rani looked adorable in a purple tie-dye dress and white tights, along with tennis shoes.

Bingham, whom Kate shares with her former partner Matt Bellamy, was dressed in a Baltimore Orioles jersey. 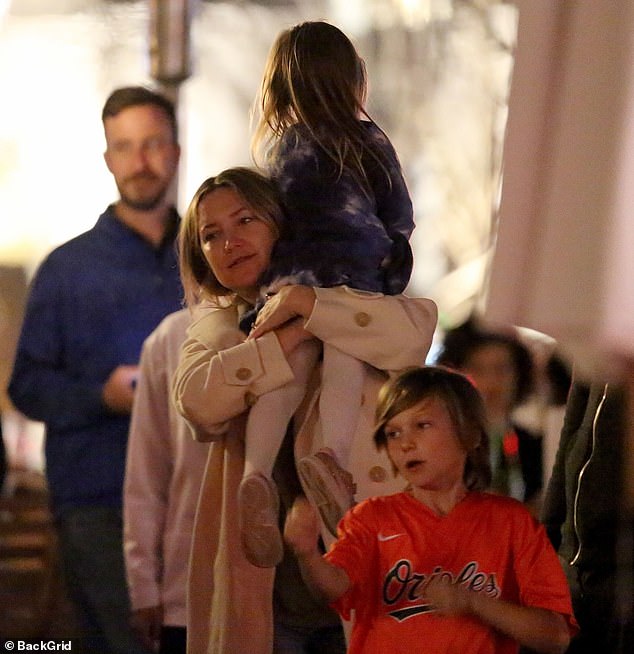 Danny looked relaxed in a black zip-up hoodie with a gray shirt, along with a black baseball cap, and he sported a shaggy beard and long dark hair.

As the lovebirds exited the restaurant, they stopped to chat with another couple.

Seemingly missing from the dinner was Kate’s oldest son Ryder Robinson, 18, whom she shares with her ex-husband Chris Robinson.

Kate — who hosts with her brother Oliver Hudson — compared something to when her mother Goldie Hawn would ‘show up to hot lunch,’ which took Stella aback at first.

The English fashion designer didn’t realize at first that the expression just referred to a lunch served at school, as she briefly thought it was some kind of sexy lunch. 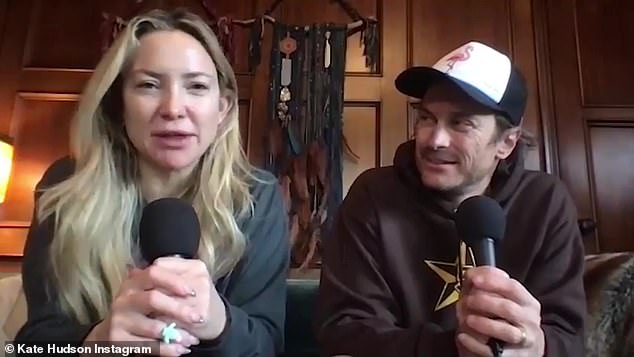 Side gig: Earlier on Tuesday, Kate posted a funny clip from her podcast Sibling Revelry, which she hosts with brother Oliver Hudson. They interviewed sisters Stella and Mary McCartney 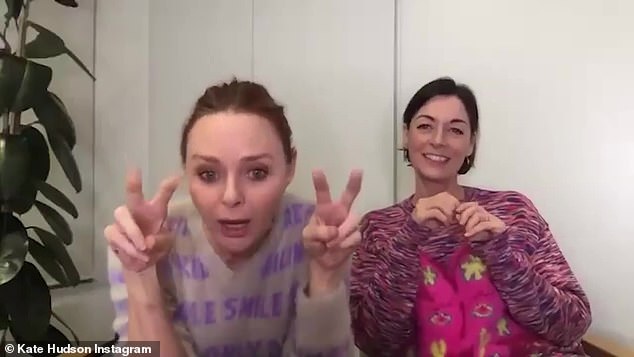 Whoops! After Kate mentioned her mother Goldie Hawn volunteering at ‘hot lunch’ when she was a kid, Stella briefly thought she meant a sexy lunch, and she said Britons wouldn’t be familiar with the expression once Kate explained that it was just meant a warm school lunch

Earlier on Sunday, Kate and Danny were dressed to the nines as they made a splash at the Vanity Fair Oscars Party in Beverly Hills at the Wallis Annenberg Center for the Performing Arts.

The actress had all eyes on her with her gorgeous black off-the-shoulder gown, which featured a sheer bustier-style midriff.

Danny spiced up his look with a black velvet tuxedo jacket featuring lustrous peaked lapels, along with a silk bow tie. 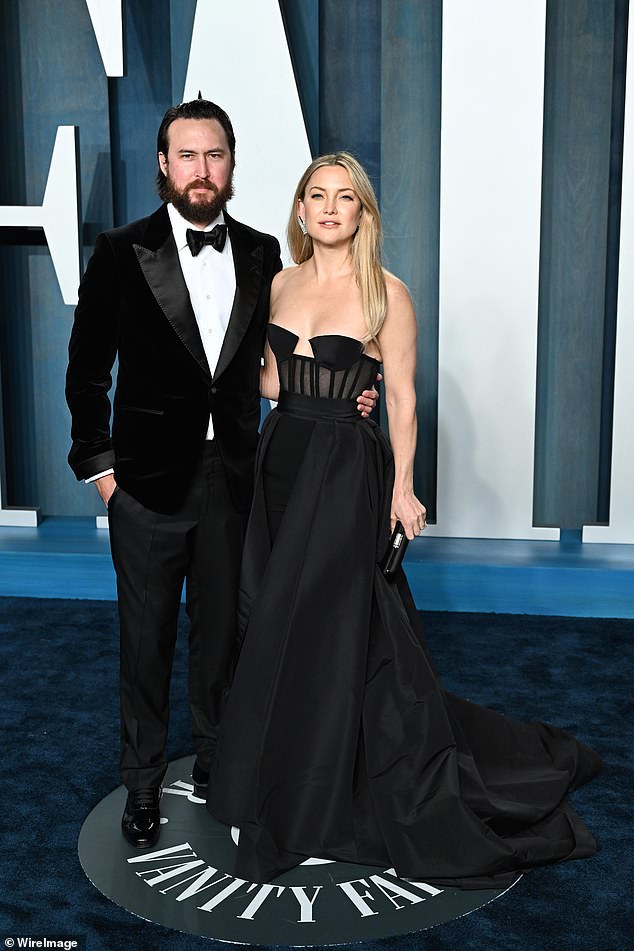 Back in black: Earlier on Sunday, Kate and Danny were dressed to the nines as they made a splash at the Vanity Fair Oscars Party in Beverly Hills at the Wallis Annenberg Center for the Performing Arts 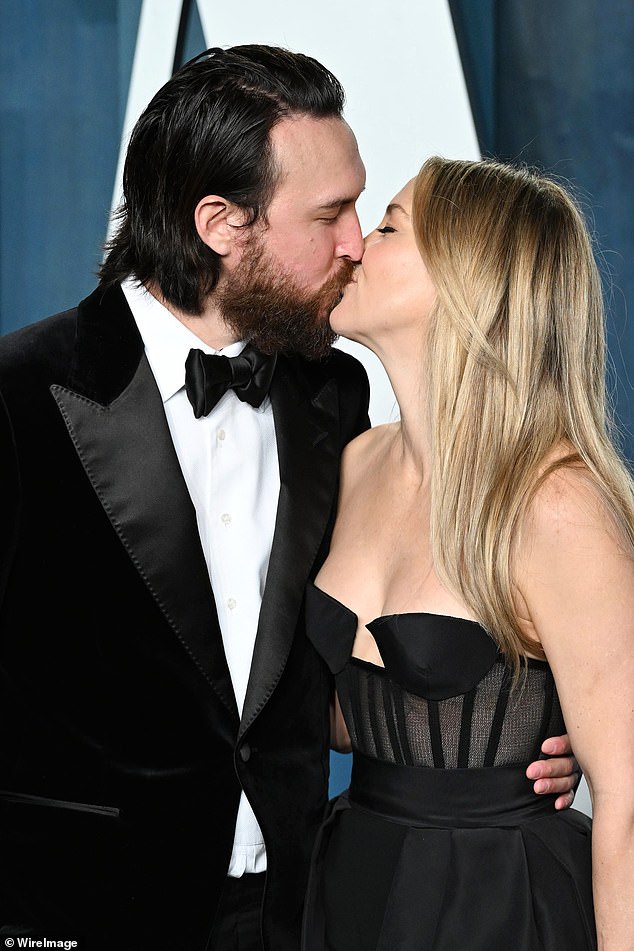 Complementary style: The actress had all eyes on her with her black off-the-shoulder gown, which featured a sheer bustier-style midriff. Danny rocked a black velvet tuxedo jacket with lustrous peaked lapels