Kate Middleton arrives at Twickenham as she takes rugby role

On Wednesday, Kate, who recently turned 40, took to the pitch at Twickenham Stadium as she joined an England rugby training session. This public engagement came just hours after Kensington Palace announced that the Duchess of Cambridge had been appointed patron of the Rugby Football Union (RFU), and Rugby Football League (RFL).

These roles were previously held by her brother-in-law Prince Harry, but the Duke relinquished this and other patronages following his decision to step down as senior royal.

Harry and his wife Meghan Markle, 40, also had to give up using their HRH titles in any official capacity but were able to still use their Duke and Duchess of Sussex peerage.

During her first outing in her role as patron of the Rugby Football Union, Kate met with players from the men’s and women’s rugby squads who are preparing for the Six Nations championships.

The mother-of-three took part in two special skills sessions run by head coach Eddie Jones and trained with both the male and female teams. 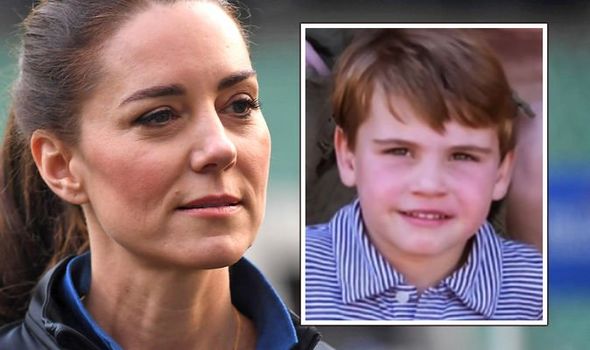 Kate shares fear for Prince Louis’s future – ‘Worried he’ll be in middle of everything’ (Image: Getty and Kensington Palace )

During a chat with England’s women squad, the Duchess explained how her eldest child Prince George, eight, plays rugby and netball with girls and boys at his school, Thomas’s Battersea.

She added: “Now that there is a move towards co-ed sport, so it’s not just girls playing netball, but other sports like rugby, which is great.”

During her visit, Kate was also given three little team kits as presents for her children Prince George, Princess Charlotte and Prince Louis.

The Duchess went on to reveal that her sons, George and Prince Louis, are keen rugby players.

During a chat with England’s women squad, the Duchess talked about her children (Image: Getty)

While speaking about her children’s enthusiasm for rugby, she explained a worry that she and Prince William have about their youngest child’s future.

She described their three-year-old as being like a “kamikaze” adding that this linked to their concern.

Kate said: “They’re all enjoying it, Louis is kamikaze, we’re worrying about when he gets older, he’ll be in the middle of everything.”

The group laughed in response to the Duchess’s revelations about her children’s hobbies and player Sarah Hunter joked: “That’s perfect!”

During her sporty outing on Wednesday, Kate was spotted passing the try line and was taught how to score a conversion kick.

During her visit, Kate was also given three little team kits for her children (Image: Getty)

At one point, the Duchess was also lifted into the air to catch the ball during a lineout.

The appointment of this position fits in well with Kate’s previous endorsements about how sports can positively influence the mental wellbeing of children and adults alike.

During her session with the women’s rugby team, she declared she is “very proud” of her new rugby patronages.

The Duchess made the comment after being presented with the junior England kits for her children.

She said: “I’m very proud to be here. I’ve got lots to learn, I’ve been looking at different players and tactics.”

Prince Louis will celebrate his fourth birthday in April (Image: THE DUCHESS OF CAMBRIDGE / KENSINGTON PALACE)

The announcement of the patronage for the Duchess, who has been a lifelong rugby fan from childhood, comes ahead of this year’s Six Nations rugby union competition, with the first fixtures this weekend.

In the past, Kate was spotted cheering for the Welsh team when they clashed against England as her husband Prince William is patron of the Welsh Rugby Union

England and Wales are set to play against one another in the Six Nations championship later this month, so Kate and Prince William are now expected to side by their own patronages.