An electric vehicle has beaten all petrol, diesel and hybrid rivals to clinch the first major motoring award of 2022 with the Kia EV6 announced as What Car?’s Car of the Year.

The £41,000 plug-in family car, which has a claimed range of more than 320 miles, trumped every new four-wheeled model at the automotive Oscars ceremony on Thursday evening.

It’s only the second time a zero-emission vehicle has been crowned the best new car in the annual honours, which have been held every year since 1978.

Trophies were handed out across 27 categories in total as a means to inform consumers about which motors might be their best choice across a range of segments, from small city cars to pick-up trucks. Find out below which models What Car?’s expert judging panel recommends for 2022… 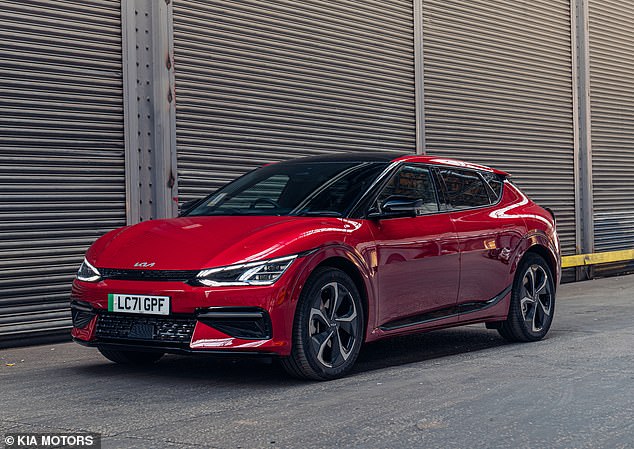 Is this the king of new cars in 2022? The Kia EV6 has picked up the first major motoring award of the year, lifting the crown as the winner of What Car? Car of the Year gong

The first – and only other – electric vehicle to win the accolade was also a Kia, the e-Niro in 2019 – also the Korean car company’s debut What Car? victory.

Underlining the breakthrough progress it has enjoyed in recent years, it is only the third non-European manufacturer to win the top prize at the What Car? Awards since it was established 44 years ago.

Judges said the EV6 was the unanimous winner having ‘stood out for setting new benchmarks for electric cars’ from when it hit the market late last year.

Prices in the UK start from £40,945 and rise up to £51,945 for the most expensive variant, with cheaper options featuring rear-wheel drive and the pricer specifications powering all four corners.

The most popular version sold so far is the mid-range ‘GT-Line RWD’, which costs from £43,945, and is the specific trim level What Car? highlighted as the best new motor for 2022.

Sending power to the rear wheels, it develops 226bhp via a single-speed automatic transmission.

The stylish SUV can sprint from a standstill to 62mph in 7.3 seconds and up to a limited top speed of 114mph.

Hot hatch: Mercedes-AMG A45 S Plus 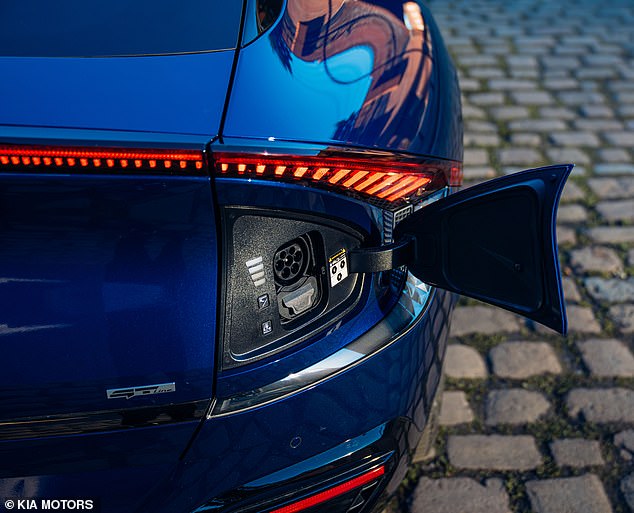 It is only the second time in the What Car? Car of the Year award history that an EV has won the top prize. The last time was in 2019 and was also a Kia – the e-Niro 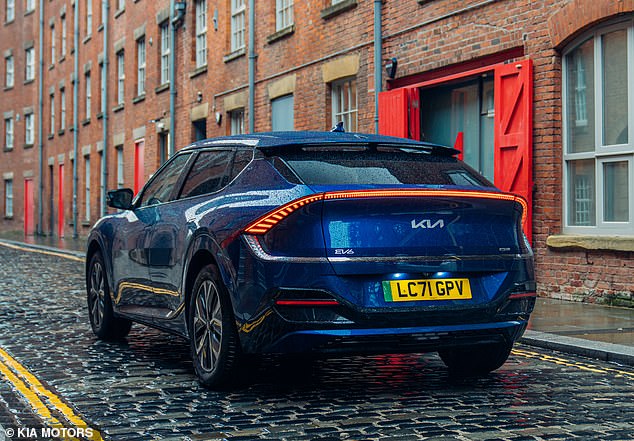 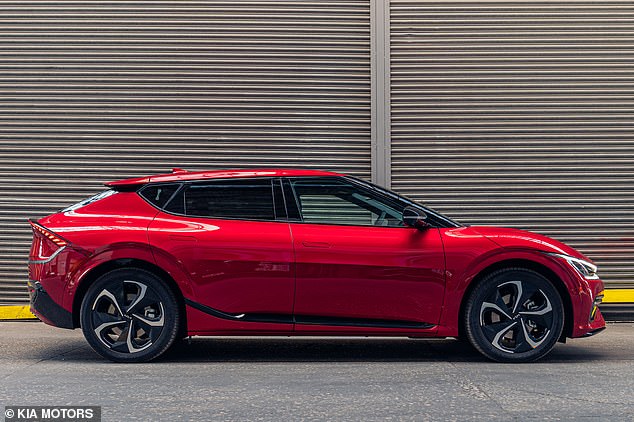 Kia says the EV6 can cover up to 328 miles on a single charge. When What Car? put it through a worst-case real-world test in cold conditions, it still managed to cover 224 miles

In this trim, the EV6 offers drivers an ‘official’ range of 328 miles, according to lab test results quoted in sales brochures.

However, What Car? said it ran the 100 per cent EV in ‘near worst-case’ low temperatures – which not only inhibits a battery from working at its optimum level but also takes into account the consumer’s need to have the heating running – and still managed to cover an impressive 224 miles before needing to be recharged.

It is capable of super-fast, 800-volt charging, with its battery capable of going from 10-to-80 per cent charge in as little as 18 minutes if a user can find a suitable rapid chargepoint.

Drivers can even use the car as an independent portable power-supply – whether to charge up another car or electric bike, power camping equipment, or boil a kettle to make a cup of tea.

But it was it wasn’t just its electric credentials that wowed the judging panel: its practicality and quality also won votes.

What Car? praised it above all internal combustion engine rivals for being hugely spacious, supremely refined and its market-leading seven-year manufacturer warranty.

Will it fit in my garage? Kia EV6 GT Line 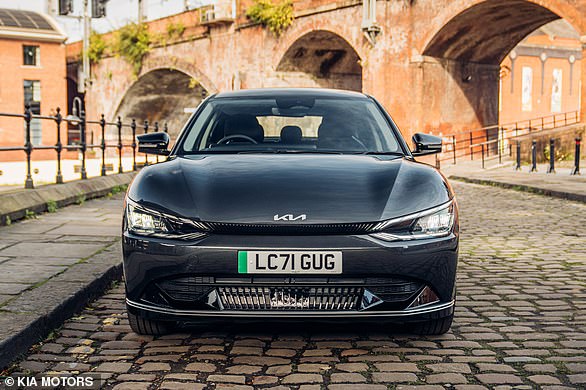 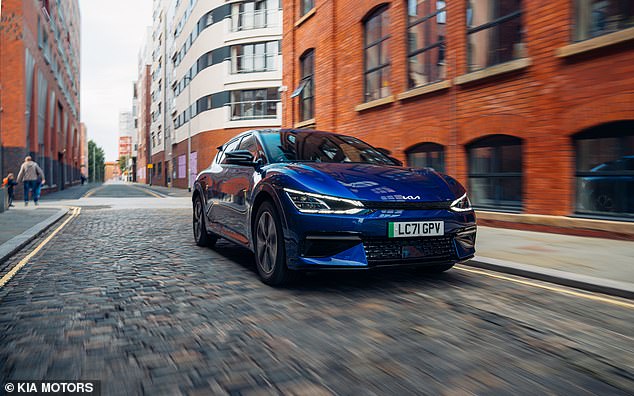 Prices start from a fraction under £41k, though the most popular version is the mid-range ‘GT-Line RWD’, which costs £43,945. It was this specific trim level that What Car? recommends 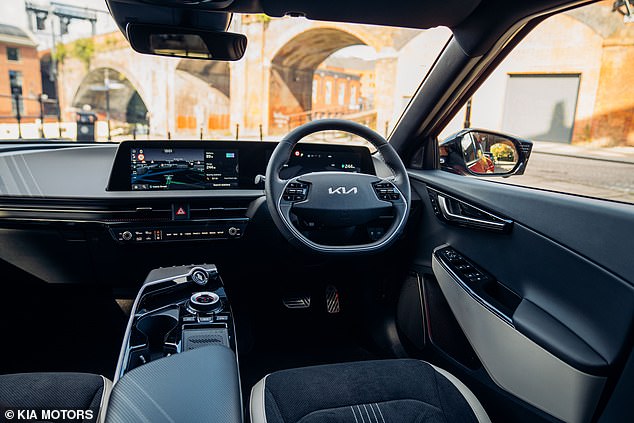 A modern and wonderfully-designed cabin helped the Kia EV6 secure the 2022 award ahead of all petrol, diesel and hybrid rivals 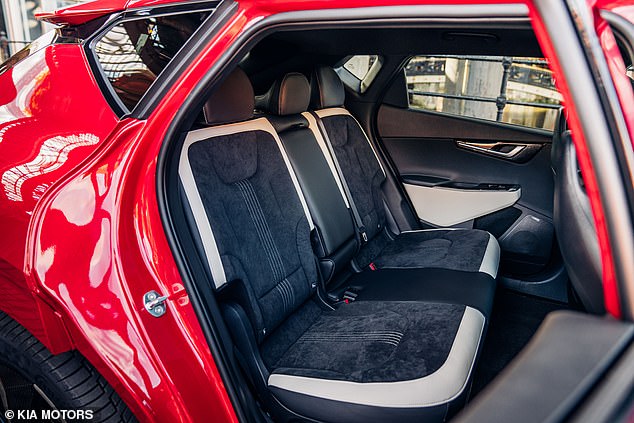 What Car? praised it above all its internal combustion engine rivals for being hugely spacious, supremely refined and for its market-leading seven-year warranty

What Car? editor Steve Huntingford said the electric Kia had ‘set a new benchmark for an electric vehicle’ and that the Korean brand is now up there with Tesla for leading the market for quality zero-emission cars.

He added: ‘The EV6 is a terrific all-rounder that answers electric car buyers’ questions around range and charging times brilliantly, and which offers terrific space, refinement and value for money.

“Kia’s progress has long been impressive, but it is the way that it has seized the opportunity offered by the transition to electric cars that has made it a leader in the market.

‘Coming hot on the heels of its victory with the e-Niro in 2019, this Car of the Year win cements its position alongside Tesla as one of the most exciting electric car makers on the planet.’

Responding to the award, Kia UK president Paul Philpott said it was a ‘great honour’ to win Car of the Year.

‘The EV6 is a truly exceptional car and it’s just the beginning of things to come from Kia on our rapid journey to electrification. This is tangible recognition that Kia is fast becoming a true leader in electric vehicles having also won this award with e-Niro in 2019,’ he said. 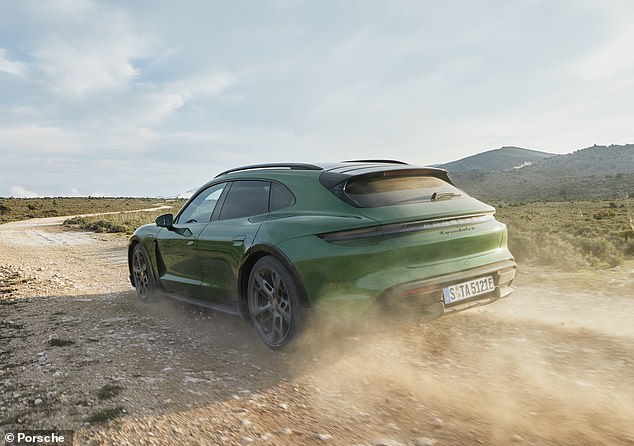 There were more victories for electric vehicles, with the Porsche Taycan Cross Turismo trumping every high-powered petrol car to the best performance model for 2022 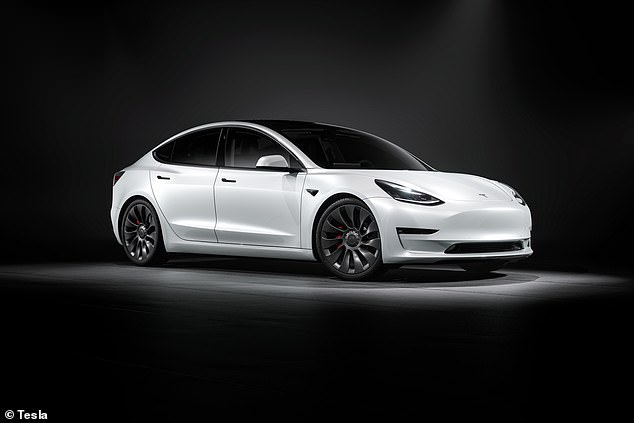 The Tesla Model 3 incredibly became Briton’s second most-bought car in 2021. It was recommended by What Car? in this year’s awards as the best large EV on the market

The EV6 wasn’t the only electric model to trump its petrol and diesel counterparts: Porsche’s Taycan Cross Turismo beat the rest to the Performance car accolade, which is no mean feat for a vehicle powered entirely by batteries.

Tesla also picked up a trophy following its record-breaking year for sales in Britain, taking the Large Electric Car category with its Model 3, the second most-registered car in the UK in 2021.

Other big winners on the night included BMW, which amassed an incredible five category victories.

Nissan’s Qashqai was the winner of the Safety Award, with an expert panel from Thatcham Research saying it has brought ‘high-end safety features to the mass-market without breaking the bank’.