Kingfisher has seen half-year profits slump as the Covid-induced boom in DIY products wanes and the cost of living crisis hits consumer spending.

The B&Q and Screwfix owner’s retail profits plunged by 27.7 per cent year-on-year to £555million for the first six months ending 31 July, although this was still over £100million above pre-pandemic levels.

A solid comparative performance in the British Isles during the prior year was primarily blamed by the firm for the decline in profits, though worsening economic uncertainty has also impacted the home improvement sector. 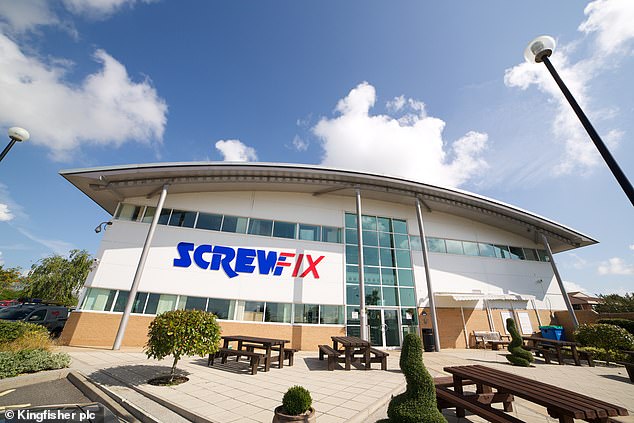 Earnings in the UK and Ireland were further hurt by costs associated with opening 88 new stores, increasing electricity and gas prices, and more robust demand for low-margin products.

Overall reported like-for-like sales still only fell by 4.1 per cent to £6.81billion, which was in line with analysts’ expectations, even though online revenues slid back due to the absence of store trading restrictions.

Kingfisher saw strong growth in Poland, where its Castorama outlets were not affected by enforced closures, while Britain’s heatwave in July drove a boost in orders for B&Q’s cooling products.

Even as trade has weakened, the company’s turnover was 16.6 per cent higher on a three-year basis thanks to growth in all markets and e-commerce revenues skyrocketing 156.3 per cent.

The London-based group said sales since the beginning of August had been ‘encouraging’, buoyed by rising interest in outdoor and ‘big-ticket’ items.

It added that inflationary pressures have eased as the price of metals and plastics had fallen, while sea freight rates have been sliding downwards since January.

However, Kingfisher warned that cost strains are set to continue throughout the second half of the year because of a time lag between ordering products and selling them.

Chief executive Thierry Garnier said: ‘We remain vigilant against the more uncertain economic outlook for the second half. We are therefore focused on delivering value to our customers at a time when they need it most.’

This slowdown marks a drastic departure from the first half of the pandemic era when the rise in working from home encouraged people with extra savings across Europe to spruce up their properties.

Kingfisher became one of the retail sector’s major pandemic winners, along with the likes of fellow home improvement firm Wickes and Travis Perkins, both of whom recently reported a weakening in demand in their half-year results.

Adam Vettese, an analyst at investment platform eToro, said: ‘If Kingfisher’s results are anything to go by, the pandemic-fuelled DIY boom is well and truly over.

‘While CEO Thierry Garnier talks about ‘resilient’ performance, the reality is that most investors will be focused on the fact that many of its key metrics are considerably lower than they were this time last year.’

He added: ‘The trouble for all retailers, including Kingfisher, is that they are not only getting clobbered by the higher cost of goods but so too are their customers, meaning they are likely to spend less until the economic situation improves.’

Kingfisher shares were 3.5 per cent lower at 238.6p during the mid-morning on Tuesday, meaning their value has fallen by around a third in the past 12 months.