Kourtney Kardashian and Travis Barker are proving their sense of humor is just as strong as their love for one another.

On Tuesday, the engaged couple reacted to a hilarious spoof of their upcoming wedding by comedy/influencer sensation Benny Drama, who boasts 1.7million followers on Instagram.

The skit titled ‘Kourt’s Fairy Tale Wedding’ featured the funnyman impersonating all the Kardashian-Jenner clan yet again, as well as Travis, as he poked fun at the idea of their special day being filmed for their new Hulu reality series. 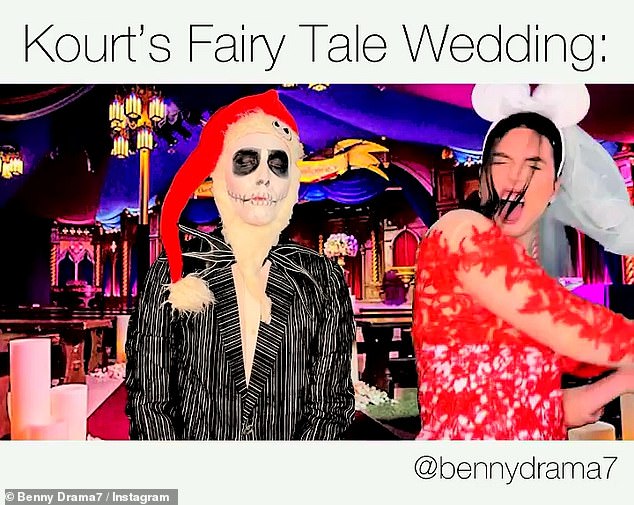 In good fun: Kourtney Kardashian and Travis Barker have reacted to comedian Benny Drama lampooning their upcoming wedding (Pictured above)

Despite some risqué jokes and impersonations, the happy couple saw the funny side, wasting no time in commenting underneath the video.

‘This makes me emotional,’ said Kourtney, 42, with crying and laughing emojis. 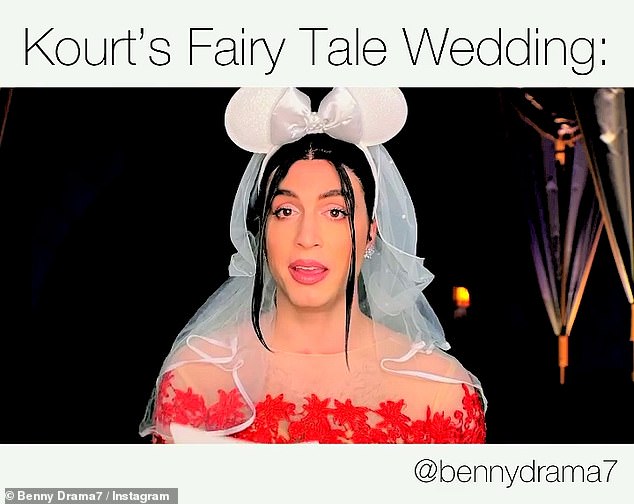 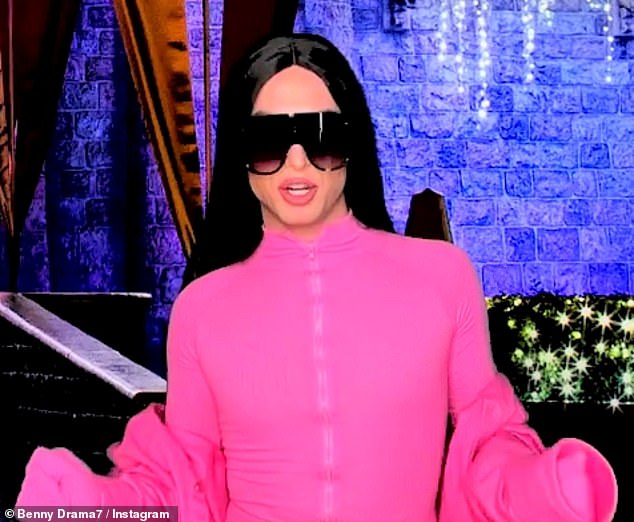 Everyone got an invite: Benny impersonated Kourtney’s sister Kim Kardashian 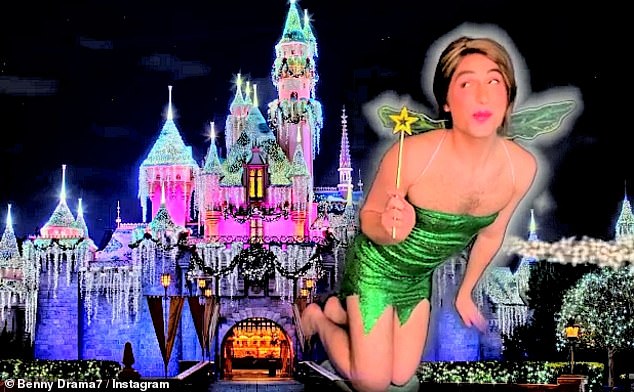 Guest star: The comedian also dressed up as Addision Rae in a fairy costume 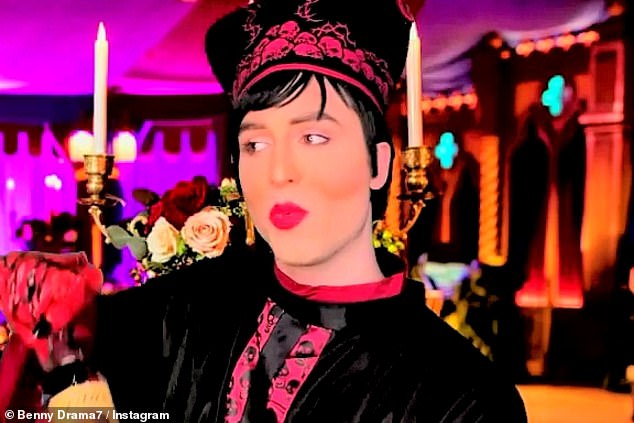 Benny Drama is no stranger to lampooning the Kardashian family, and has been on their radar for some time now.

In March last year, momager Kris Jenner jokingly confronted the comedian and called him a ‘little b***h’ for his constant skits centered around the family.

His latest video comes as a trailer for Hulu’s upcoming The Kardashians was shown on Sunday, promising a behind-the-scenes look at Travis and Kourtney’s engagement. 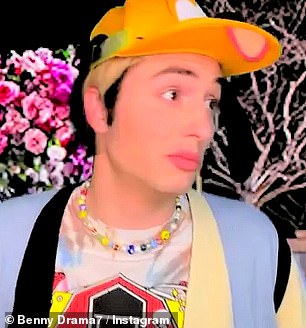 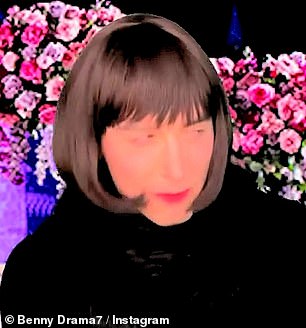 To the bone: Benny Drama peppered his skits with some very out there humor, including a bawdy joke about the family’s grandmother MJ and Kim’s boyfriend Pete Davidson 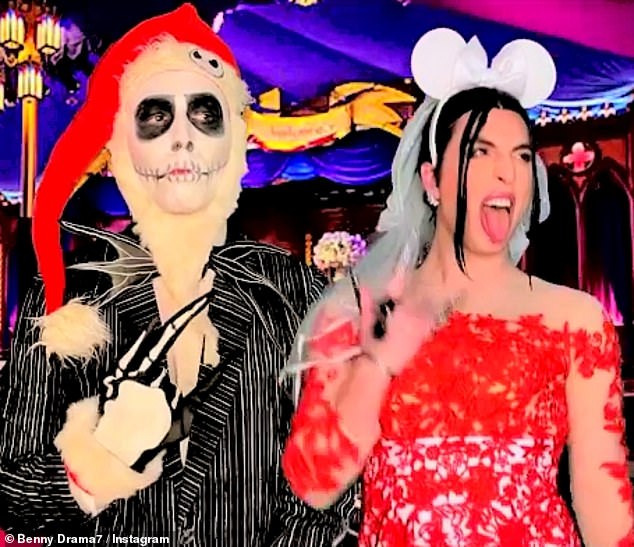 Rock’n’roll: It’s not the first time the comedy-influencer has lampooned the stars

Proving that he’s not afraid to really go for it with the family, Benny Drama peppered his skits with some very out there humor, including a bawdy joke about the family’s grandmother MJ and Kim’s boyfriend Pete Davidson.

Barely any family member came out unscathed, including Khloe Kardashian, who Benny Drama dressed up as with a fake hand – referencing the recent online chatter about how her fingers had appeared overly long in a social media post.

However, it seems he still has the co-sign from the famous family and their friends, as Kim Kardashian’s PR pal Simon Huck also commented on the post favorably, writing: ‘I can’t’ 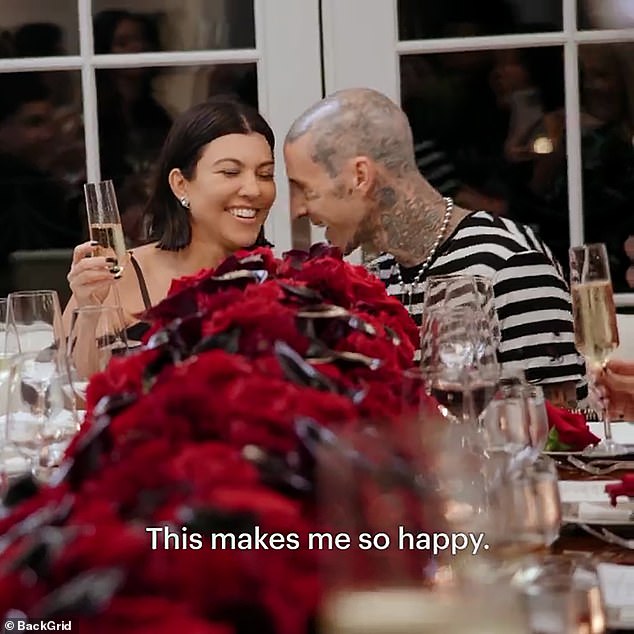 The real deal: A trailer for Hulu’s upcoming The Kardashians was shown on Sunday, promising a behind-the-scenes look at Travis and Kourtney’s engagement.