Sergei Beseda, head of the Fifth Service of the FSB intelligence agency, has been taken to Lefortovo, an infamous jail on the outskirts of Moscow that was used by the KGB — the forerunner agency of the FSB — to hold political prisoners in the Soviet era and is routinely used to detain suspected traitors, Andrei Soldatov, an expert on Russia’s security services claimed.

According to Mr Soldatov, Mr Beseda had been put under house arrest in March along with his deputy, Anatoly Bolyukh, as officials investigated whether intelligence on Russia’s invasion and the planning behind it was being leaked to adversaries.

After his transfer, his case is being investigated by the Military Investigative Department of the Investigative Committee (GVSU SK), Mr Soldatov wrote on Twitter.

Mr Beseda, who was in charge of FSB intelligence and political subversion in the ex-USSR, had held his position at the agency since 2009.

The 68-year-old, currently in pre-trial detention, had been on a trip to Ukraine shortly before his arrest.

Reports of the official’s detention, which the Kremlin has not confirmed, come amid growing signs Moscow’s “special operation” may not be going according to plan. 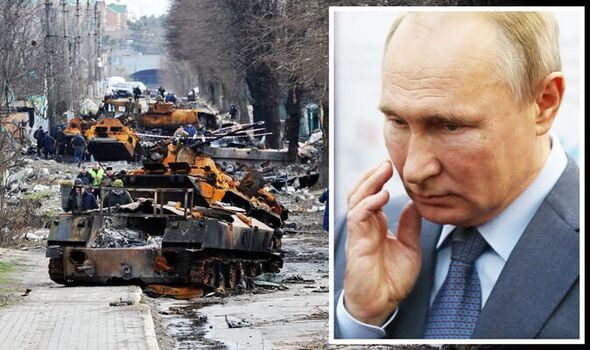 Putin is punishing officials over failed intelligence services that could be stalling the invasion (Image: Getty)

Dmitry Peskov, the Kremlin spokesperson, on Thursday made the rare admission the country had “significant losses” amounting to a “huge tragedy” for the country.

His acknowledgement of the scale of Russian losses was followed, a day later, by attempts to play down the gravity he had conveyed.

Casualties on Putin’s end have been hard to assess, with Russia’s defence minister saying on March 25 — its most recent update — 1,351 of their soldiers had been killed in combat, while 3,825 were wounded.

Ukraine, citing its own recovery of bodies and intercepted Russian communications, says 18,900 Russian soldiers have been killed.

The Kremlin has called these numbers inflated.

‘Significant losses’: The Kremlin last week made a rare admission of its struggles in Ukraine (Image: Daily Express)

During an interview on Sky News, Mr Peskov said the Russian troop withdrawal from certain areas in Ukraine, including Kyiv’’s northern region, was an “act of goodwill” to “lift tension” during negotiations between Russia and Ukraine.

But the West is sceptical of Russia’s official motive, believing, rather, that Moscow is stepping back as a result of unexpectedly fierce resistance shown by Ukrainian forces, who managed to stop its advance towards the capital.

Then, there are the deaths of senior figures among Putin’s team.

BBC Russian, which has kept a confirmed count of the number of Russian losses, has said 217 of the 1,083 Russian deaths it had been able to confirm were officers – from junior lieutenants to generals.

Senior Russian officers frequently fight alongside their units because decisions must be confirmed by higher-ranking personnel.

More than 15 percent of the confirmed deaths in the army come from the country’s elite airborne, or VDV, units. Reports of desertions have been high in those units, too.

The data, though, does not free Ukraine of fear.

Ukrainian President Volodymyr Zelensky said in his nightly address on Sunday he expects Russia to “turn to even more large-scale actions in the east of our country” this week, including intensified airstrikes.

The week “will be no less tense and even more weighty with responsibility”, he added in his video message.

Meanwhile, the appointment of General Alexander Dvornikov as the new leader of Moscow’s overall invasion efforts has become a cause for concern among Western nations.

A source speaking on condition of anonymity told the BBC this morning: “That particular commander has a lot of experience of operations of Russian operations in Syria.

“So we would expect the overall command and control to improve.”

The source said the reorganisation of the command of Russia’s battle operations is an attempt to improve coordination between units, as Putin’s forces had previously been organised and commanded separately.

US National Security Adviser Jake Sullivan, when asked about Gen Dvornikov, said: “This particular general has a resume that includes a brutality against civilians in other theatres, in Syria. And we can expect more of the same.”

Speaking on CNN, he added: “This general will just be another author of crimes and brutality against Ukrainian civilians.”

Will never fly again! Elderly couple 'abandoned' for hours after landing at Manchester