Gambling group Entain has narrowed its guidance as 23 consecutive quarters of digital revenue growth came to a shuttering end.

The Ladbrokes and PartyPoker owner forecasts making between £875million and £885million in underlying earnings for the 2021 financial year, against a much broader previous estimate of £850million to £900million.

Fourth-quarter digital revenue at the FTSE 100 firm fell 6 per cent year-on-year due to a solid comparative performance in 2020 when onerous Covid-19 restrictions led to betting shops closing and punters laying more bets online. 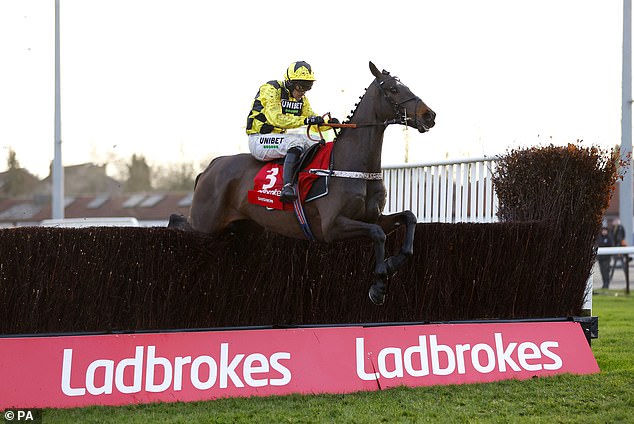 Jumping strong: Ladbrokes owner Entain forecasts underlying earnings between £875million and £885million this financial year, against a previous estimate of £850million to £900million

Yet thanks to the majority of its more than 4,000 stores remaining open this time around, the group’s retail revenue between October and December surged by 62 per cent to within 10 per cent of pre-pandemic volumes.

Although Entain’s retail revenue for the whole year plunged by over a fifth, a strong online performance in the first three quarters of last year helped its total net gaming revenues grow by 15 per cent.

The business, which also owns SportingBet and Coral, benefited from a much-fuller sporting calendar, including the UEFA European Football Championship, Tokyo Olympics events and the return of the Wimbledon Grand Slam tennis tournament.

But it has also reaped huge gains from the fast-expanding sports betting market in the United States, where activity has been flourishing since the Supreme Court’s decision to overturn a federal ban in 2018.

Entain launched a tie-up with hospitality and entertainment company MGM Resorts the same year called BetMGM, which operates in 19 US states and territories.

In a trading update released yesterday, the group revealed that it was the second-largest sports betting and gaming operator in the US markets where it functions for the three months to November 2021. 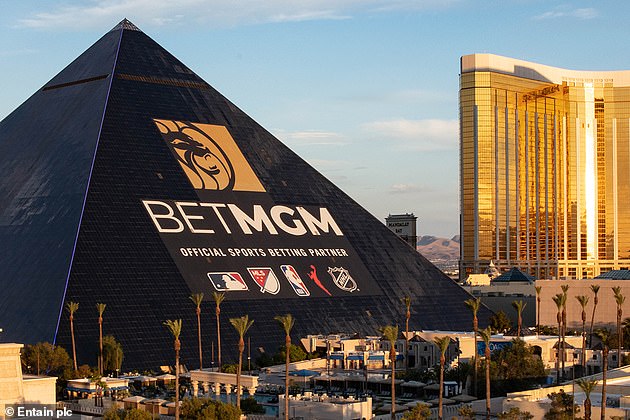 Big partnership: Entain launched its BetMGM tie-up with hospitality company MGM Resorts in the same year that the US Supreme Court overturned a federal ban on sports betting

It expects revenues of around $850million for 2021, followed by more than $1.3billion the year afterwards, and to turn a positive underlying profit in 2023.

Chief executive Jette Nygaard-Andersen said: ‘2021 has been a successful and eventful period for Entain, and our market-leading platform has driven another year of strong, sustainable and diversified growth.

‘All of our major markets have performed well. BetMGM, our hugely exciting business in the US, has been a particular highlight with FY21 net gaming revenue ahead of expectations and an upgraded outlook for 2022.’

The firm hopes to make further gains in the North American market when it launches online sportsbooks in Illinois, Louisiana and Ontario this year, and expands its bingo product and BetMGM Racing app into more states.

Like many other British gambling companies, it has been the subject of serious takeover interest from US rivals, though it has not fallen into new ownership despite major bids being offered.

MGM Resorts put forward an £8.1billion proposal to buy the group at the start of last year, but Entain rejected the deal on the grounds that its value was too low.

More recently, a £16.4billion takeover proposal from online betting giant DraftKings failed, with many analysts speculating that the joint venture partnership with MGM complicated the deal.

Shares in Entain were up 0.6 per cent to £17.20 during the mid-afternoon on Thursday, meaning their value has risen by 37.3 per cent over the last 12 months.