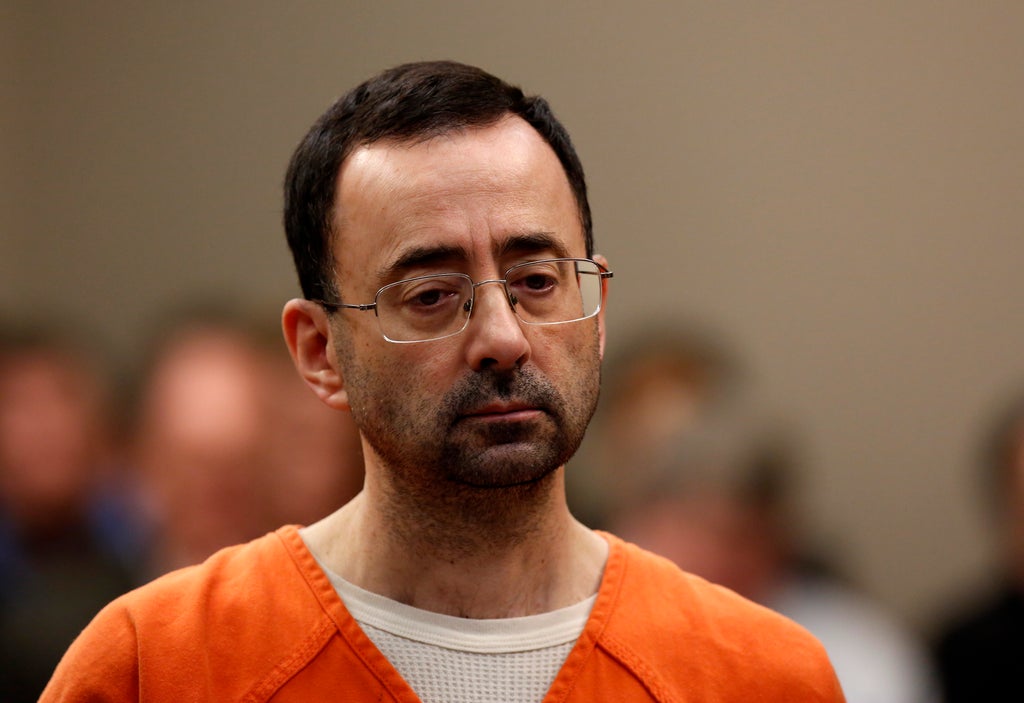 The US Senate Judiciary Committee is currently investigating the FBI’s alleged mishandling of sexual harassment allegations against Dr Larry Nassar during his tenure as team doctor for USA Gymnastics.

The congressional body heard on Wednesday from elite athletes Simone Biles, Aly Raisman, McKayla Maroney and Maggie Nichols about the abuse they suffered at the hands of the disgraced physician.

Nassar is currently serving a 40 to 175-year prison sentence for seven counts of first-degree criminal sexual conduct after being accused by more than 300 women.

The hearing follows on from US Justice Department inspector general Michael Horowitz issuing a scathing report in July that accused the bureau of botching the investigation it began six years earlier and therein allowing the abuse to continue unchecked.

Both Horowitz and FBI director Christopher Wray will also address the Senate alongside the gymnasts, the latter expected to face tough questions on why the agents responsible for bungling the investigation were never prosecuted for misconduct.

Here’s a timeline of the case against Larry Nassar.

2014 – Amanda Thomashow becomes first woman to file an official Title IX complaint against Nassar, telling Michigan State University (MSU) that he had touched her inappropriately during a medical examination, only for the institution’s inquiry to result in no charges and rule that his behaviour had been “medically appropriate”.

July 2015 – FBI’s investigation into Nassar commences after USA Gymnastics president and CEO Stephen Penny reported allegations made by Maggie Nichols against the doctor to the FBI’s Indianapolis field office and provided agents with the names of three victims willing to be interviewed.

September 2015 – FBI interviews first and only witness but does not document its findings in a report, eventually known as a “302”, until February 2017.

4 August 2016 – The Indianapolis Star publishes first of a series of investigative reports into Nassar’s conduct.

30 August 2016 – MSU relieves the doctor of his clinical and patient duties as it carries out a new investigation.

12 September 2016 – The same Midwestern newspaper publishes another article, this time featuring disclosures from two ex-gymnasts who alleged that Nassar had sexually abused them as children in the 1990s and early 2000s. One, Rachael Denhollander, was named in the article and had filed a complaint against Nassar with the Michigan police. The second accuser was later revealed to be Jamie Dantzscher, a member of the US Olympics team for Sydney 2000, who had launched a civil lawsuit against him in California.

22 November 2016 – Nassar charged with three counts of first-degree criminal sexual conduct in Ingham County, Michigan, including one with a person under 13. He pleaded not guilty and was freed on a $1 million bond but the state’s attorney general said the matter was “just the tip of the iceberg”, with police revealing that 50 victims had made sexual abuse claims against him.

16 December 2016 – Nassar arrested and indicted on federal child pornography charges. Indictment says he was in possession of “thousands” of indecent images of children collected between 2003 and 2016.

22 November 2017 – Nassar pleads guilty to seven counts of first-degree criminal sexual conduct as part of a plea deal in exchange for prosecutors dropping eight other charges against him and not adding charges for other sexual assault incidents that had subsequently emerged.

22 January 2018 – Entire board of USA Gymnastics steps down under pressure from the US Olympic Committee.

24 January 2018 – Ingham County hearing ends with Judge Rosemarie Aquilina sentencing Nassar to 40 to 175 years in prison and telling him: “I just signed your death warrant.” On the same day, Lou Anna K Simon steps down as president of MSU, apologising to the victims in her resignation letter and reflecting on the “evil” of Nassar.

31 January 2018 – Eaton County hearing begins, also in Michigan, where Nassar pleads guilty to three charges of criminal sexual conduct – two of the charges relating to girls between the ages of 13 and 15 and one against a girl younger than 13. Another 60 women come forward to give victim-impact statements, with the total of accusers now at 265.

5 February 2018 –  Nassar sentenced to 40 to 175 years in prison, to be served concurrently with Ingham County sentence but after the child pornography sentence.

22 August 2018 – Nassar’s appeal of his 60-year sentence on child pornography charges is rejected by three-judge panel of US Sixth Circuit Court of Appeals.