The Stevenage-born motorist is hoping to get his season back on track this weekend, after an encouraging display in the Spanish Grand Prix. While Hamilton may be disappointed with his fifth-place finish, the seven-time world champion was forced to the back of the racing pack early on, so had to use his years of experience in carving out a decent final position. Overall, Hamilton has been languishing all season, with his Mercedes team unable to compete with Red Bull, led by Max Verstappen, and Ferrari.

But his team is now eyeing their rivals after the promise shown in Spain last weekend.

Among the positivity was Mercedes chief Toto Wolff, who said: “We are learning by doing.

“These regulations have caught us off guard, in a way, and step by step we are understanding what we need to do in order to bring the performance back into the car.

“We saw another big step at the weekend. Probably we’ve halved the disadvantage to the frontrunners but still, there is a long way to go in order to be right up there in the fight. 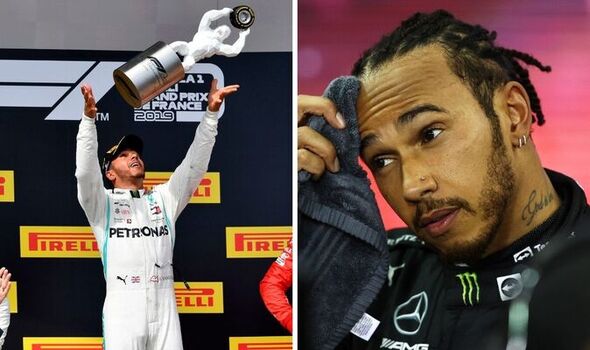 “With Lewis, we probably had the fastest racecar. He was 50 seconds behind in the end, but he caught all the way up, and at stages, he was the quickest, which shows the potential the car has.”

Mercedes, and Hamilton himself, will hope they can channel their experience on the Monaco circuit, including 2019’s famous win there for the Briton.

At the time, Hamilton was aiming to secure a fourth win in six races, but as reported by the BBC, his Mercedes team made a huge mistake prior to the start.

When Hamilton pitted, the team put the wrong tyres on his car, leaving the now 37-year-old facing an end-of-race battle with badly deteriorating grip, and the likely prospect of being overtaken.

JUST IN: Russell hits out at F1 rule and Hamilton agrees with Mercedes star

Speaking at the time, Wolff said: “He saved us. His driving saved us.”

Hamilton added: “I think it was the hardest race I’ve had.

“I’ve had a lot of races but globally, in the car and with the tyres, the strategy, with [Verstappen] behind, it was the biggest challenge I think I’ve had and I’m really grateful I was able to pull it off.”

The row over the tyres saw Wolff admit his team had “obviously” made the wrong call.

When the race was barely 11 laps in, still 67 more to go, everyone pitted, but Hamilton’s team opted to place “medium” compound tyres on, unlike the “hard” elected by his rivals.

Over the radio, James Vowles, Mercedes’ chief strategist, said to Hamilton: “You can do it if you trust it.”

Wolff then added after: “It didn’t even seem like a huge stretch.

“But we realised 20 laps into the race (stint) that on the left front some graining appeared and he started to complain about the understeer from the graining and it would get very difficult to make it to the end.”

Hamilton has only clinched a solitary podium so far this season, which came in the season’s first race in Bahrain.

Reflecting on his, and teammate George Russell’s performance in Spain, Wolff was pleased with the progress Mercedes was making in catching their competition.

“The engine performance is good. Driveability is in a good place and the balance between drag and load functioned well at the weekend.

“This is where we want to have the car in terms of straight-line performance.”