And Lily Allen wowed in her latest Instagram snap as she cut a stylish figure in an all brown ensemble while out and about in New York City on Thursday.

The singer, 36, looked incredible as she donned a brown pair of trousers which she teamed with a cosy knitted jumper. 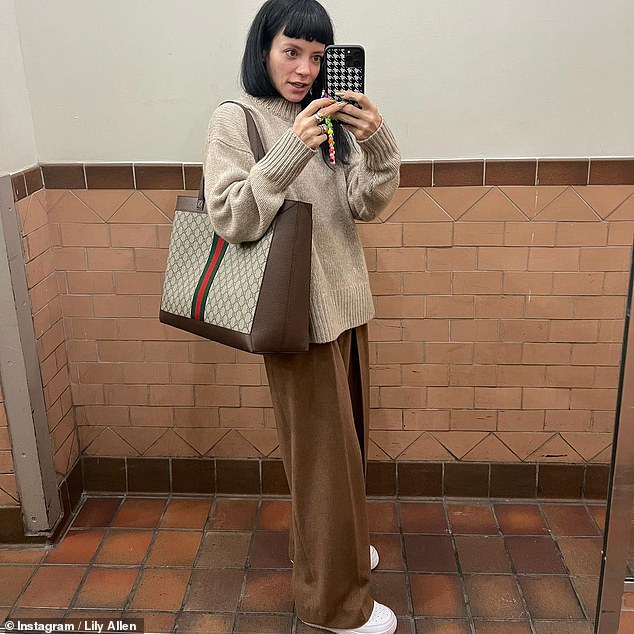 Looking good: Lily Allen wowed in her latest Instagram snap as she cut a stylish figure in an all brown ensemble while out and about in New York City on Thursday

Lily sported a pair of fresh white trainers and accessorised with a large Gucci handbag worth approximately £1,230.

The natural beauty opted for a fresh face and wore her raven locks straight in her signature bob style.

She posed for the mirror selfie, making sure to flash her bold multi-coloured nails while holding her phone.

Lily also showed off her silver record awarded to her for more than 200,000 sales on her single Roll The Dice.

She shared the snaps with her 1.5 million Instagram followers and captioned the post: ‘back in the bits’ 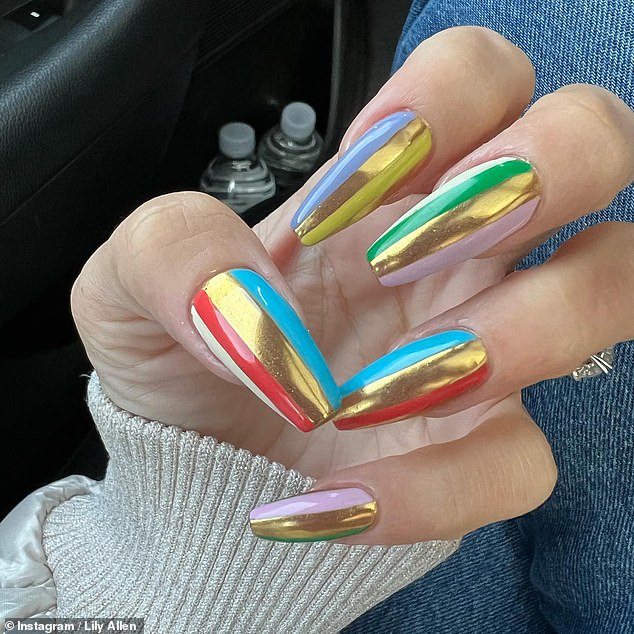 Wow: She made sure to flaunt her quirky colourful nails in several of the Instagram snaps 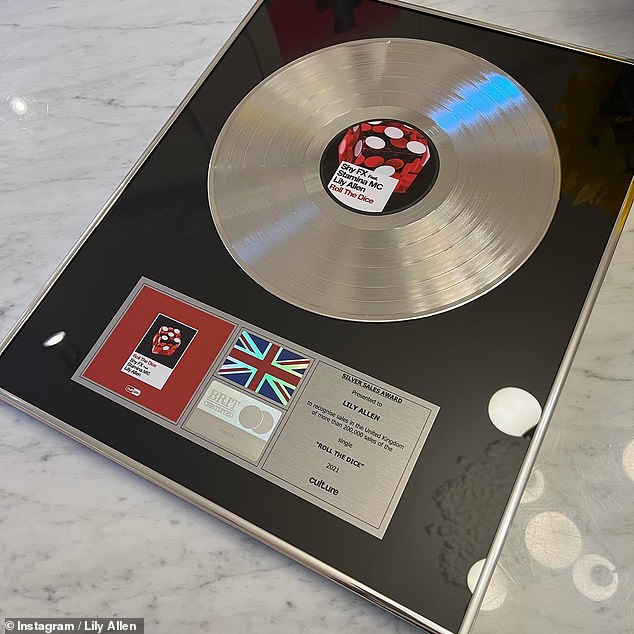 Proud: Lily also showed off her silver record awarded to her for more than 200,000 sales on her single Roll The Dice

It comes after Lily recently returned to Instagram and posted a loved-up snap with her husband David Harbour.

She deleted her account last year after publicly shaming a takeaway pizza company – but appears to now be over the drama as she posted a flurry of images from New York City with her Stranger Things star beau, 46.

In one snap David planted a sweet kiss on her head in a snap which had been taken in a professional kitchen.

She captioned the post with a simple waving emoji as her followers rushed to the comments to welcome her back. 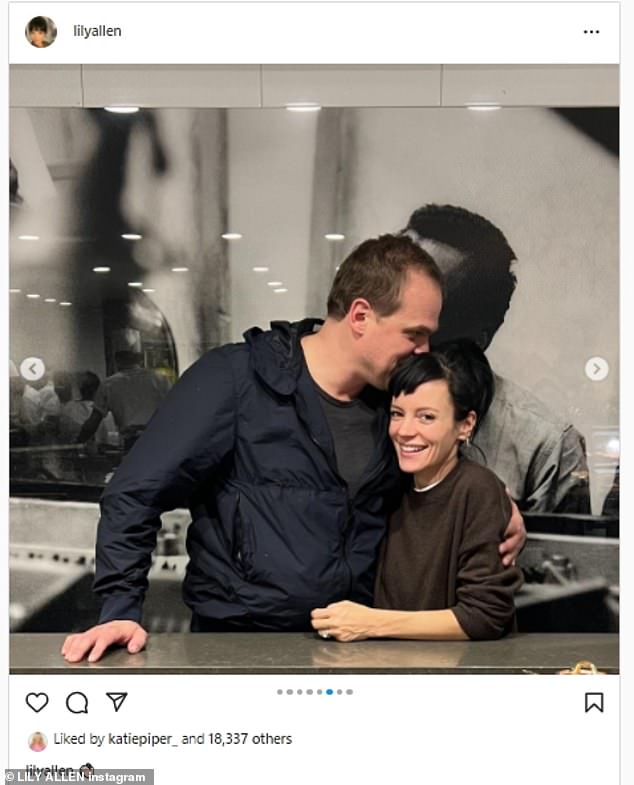 Back again: Lily shared a loved-up snap with husband David Harbour as she returned to Instagram last Thursday

Lily, who is currently living Stateside, has been keeping a low profile since being publicly spotted there in December, after dramatically quit Instagram last year.

The star took to her Story on Sunday night to share a snap of her pizza, writing in the caption: ‘Not impressed tbh’ before tagging the brand Pizza Pilgrims.

She then shared another screenshot of someone who had messaged her saying that her post ‘could end’ the company and that it was ‘brutal for the business’, before hitting back.

The follower wrote in their message: ‘Brutal to this business, publicly shaming them, yikes!’ 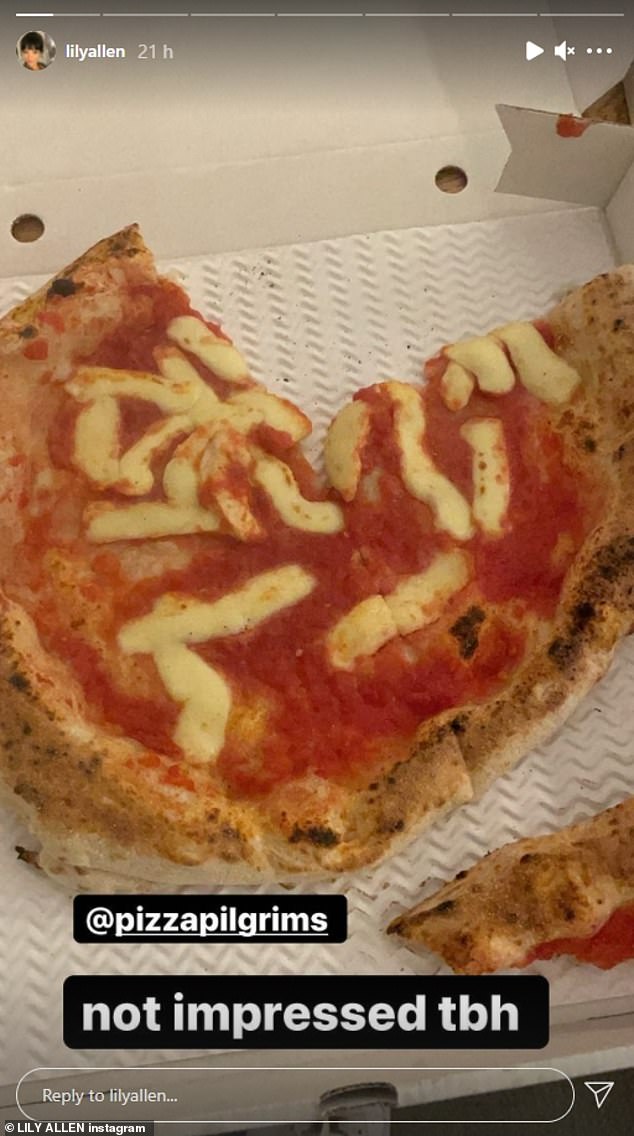 Done: The singer sensationally quit the platform after being slammed for publicly shaming a pizza company in a post shared to her Stories

Lily then replied: ‘They shouldn’t be in the business of making pizzas if this is what their dishing out. I paid for it, I’m well within my right to express my displeasure.’

The follower then said: ‘Totally, but you’ve got 1.1million followers with a lot of influence. Not to mention they’re probably trying to get back on their feet off the back of lockdowns and such. Maybe an inbox to their Instagram would be enough, a post like this could end them.’

Lily typed back: ‘1.5 million. And I think you’re actually more interested in telling a woman that she shouldn’t express her opinions than you are about this particular business. I get it, all the time, and I know it when I see it. Ask yourself if you’d tell a bloke the same?’

Later she posted another Story which read: ‘If you think I shouldn’t complain about s**t on my platform, block, restrict or unfollow me. The world is annoying as f**k sometimes, and I’m not here for all that ass kissing cloutathon nonsense. If you can’t call out a s**t pizza on here we’re all doomed.’

In the wake of her social media spat, Lily appeared to deactivate her account. 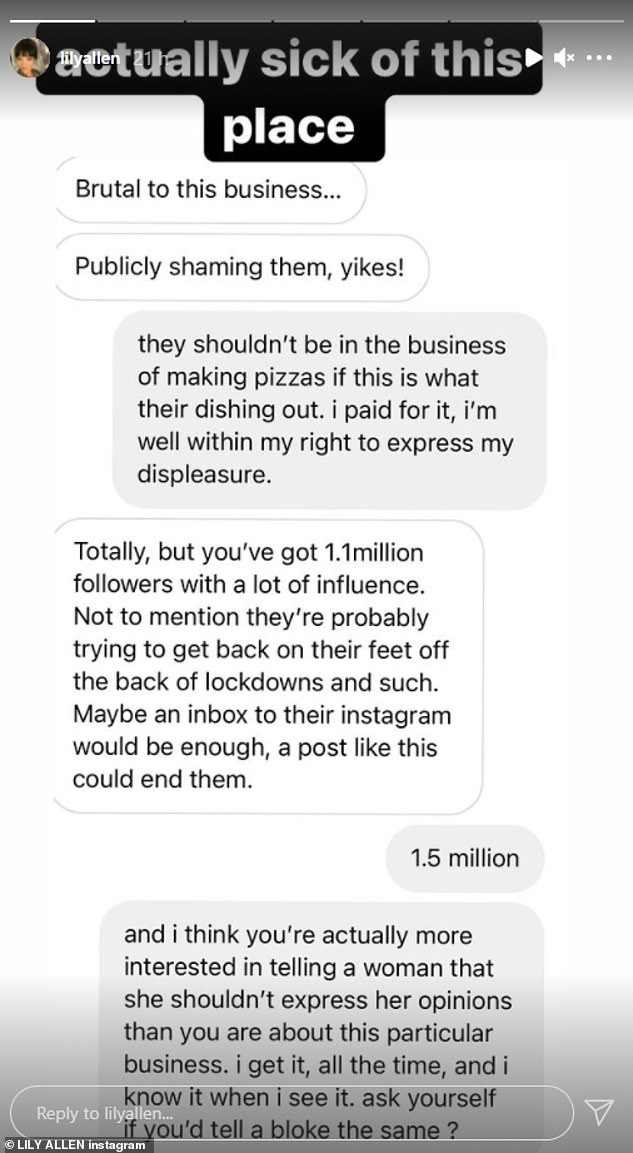 Candid: In September, Lily shared another screenshot of someone who had messaged her saying that her post ‘could end ‘ the company, before hitting back 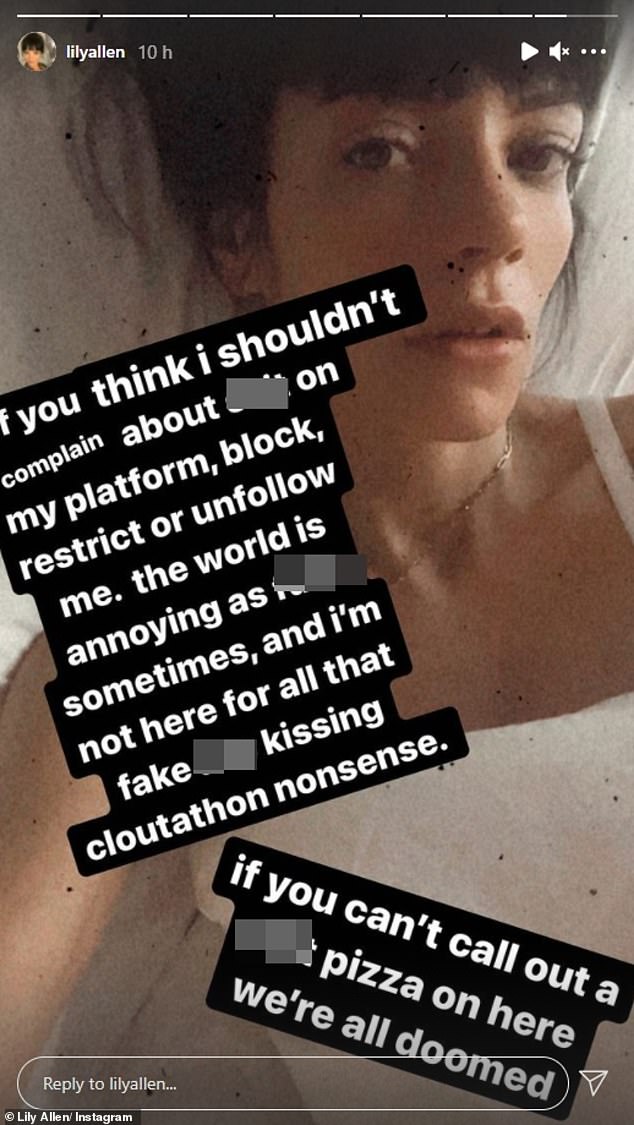 Opinions: Later she posted on her Stories: ‘If you think I shouldn’t complain about s**t on my platform, block, restrict or unfollow me,’ before dramatically quitting the platform