The city came out on top for innovation in the Schroders index, reflecting its place as the favoured home of more ‘unicorn’ companies – a startup company with a value of over $1 billion – than much of the rest of Europe. London beat Boston, San Francisco, New York and Melbourne in the ranking. Its extensive public transport network also helped the UK capital finish first.

The long-delayed arrival of the Elizabeth Line is thought to have helped bolster London’s competitive advantage over rivals such as Paris and Stockholm, with commuters now being able to benefit from some of the best travel links in Europe.

Hugo Machin, portfolio manager for Schroders Global Cities, said: “London continues to score well on all four metrics of the Global Cities Index and the importance of transport and universities cannot be over-stated.”

He added: “London, with the opening of the new Elizabeth line and a long-standing tube, bus and rail network, has a high standard of mass transit compared to other Global Cities.

“The city also has universities that remain at the forefront of academic research with the London School of Economics (LSE) and Imperial College leading the way in a number of fields.”

The news comes as City firms have reconfirmed their commitment to London six years after the Brexit vote, defying predictions of a mass exodus from the financial sector. 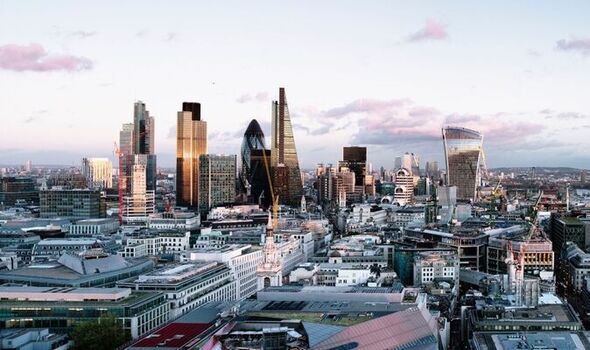 There were warnings from the remain lobby that tens of thousands of City jobs would be lost to other European capitals such as Paris, Amsterdam and Brussels after the vote, creating a brain drain away from London as workers looked elsewhere.

PwC predicted in April 2016, just months before the referendum, that as many as 100,000 financial jobs could be lost as London was closed out of the European business world. That would account for one in five of all City jobs.

However, the latest Brexit Tracker from financial firm EY revealed fewer people were leaving the UK for Europe in search of work than the previous year, with the number of relocators down to 7000 compared to 7600 in 2021 and 10,500 in March 2017.

The news has been welcomed by Brexit backers.

Fears that COVID-19 could drive people away from the cities appear to have been exaggerated. (Image: GETTY)

One Twitter user, Robert Kimbell, tweeted: “For the Rejoiners, this piece of news…

“London clings on to crown as top global city, according to Schroders index. The ranking saw Boston, San Francisco and New York on London’s tail, with Melbourne rounding out the top five. Paris the top EU city, at seven.”

Schroders noted fears that the rise of home-working due to the coronavirus pandemic might push more people to leave cities and move to the countryside had been exaggerated.

Mr Machin added that centres such as London were still attracting workers from all over the world, even as the trend for partial home-working remained beyond the lifting of COVID-19 restrictions.

The most recent data suggests a move away from city centres instead of cities entirely – as people are spending less time in centres but cities remain an important backbone for businesses.

Boston also climbed up the ranking this year, clinching the top space, while Hong Kong saw its ranking slip.

Mr Machin suggested harsher COVID-19 restrictions in some cities may have damaged their rankings, with centres still feeling the repercussions of long lockdowns.

Mr Machin: “The full material impact of the COVID-19 lockdowns on cities around the world has not been fully reflected in the data yet.

“Nonetheless, some prominent cities that have been subject to harsher lockdowns and COVID-19 restrictions are invariably going to struggle to attract inward investment, the desire for companies to put down roots there or maintain offices in these cities.

“Cities in Australia, New Zealand, Canada, Hong Kong and in the West Coast of America for example, have endured severe and prolonged restrictions. This could have a negative impact on their long-term attractiveness.

“This is the case in the US, where migratory patterns to the sunbelt states of Texas and Florida are becoming more pronounced. Schroders has begun to track this through job listings and mail forwarding data. Arguably, this trend started prior to the COVID-19 pandemic.

“The high cost of living and societal issues in West Coast cities has led to a lower quality of life in these areas, and more restrictive measures through the pandemic have exacerbated this further. On the other hand, demand for real assets in cities in the southern states is continuing to accelerate.”