She looked glamorous late last month when she made her red carpet debut at the Vanity Fair Oscars Party with her boyfriend Michael B. Jordan.

And Lori Harvey kept that energy going on Tuesday when she showed off on Instagram in a stunning red blazer dress.

The 25-year-old model stayed busy later in the day when she was spotted out in Los Angeles in a casual outfit as she headed to a Pilates class.

In her Instagram post, Lori highlighted her plump pout while showing off her trim figure in the red jacket.

The off-center lapels veered to the side to create a high-slit emphasizing her toned legs, and the jacket featured a single hip pocket on the other side.

The daughter of Steve Harvey paired her elegant outfit with a side of black open-toe stilettos with crisscrossing straps running up past her ankles. 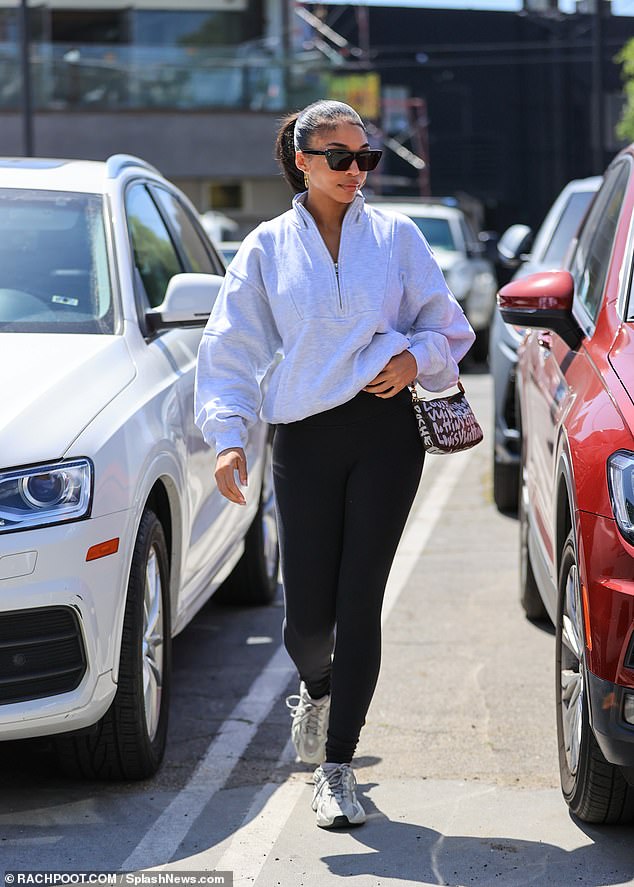 Workout time: After looking glamorous in a red blazer dress in photos she posted to her Instagram on Tuesday, Lori Harvey, 25, headed out for a session at Forma Pilates in Los Angeles 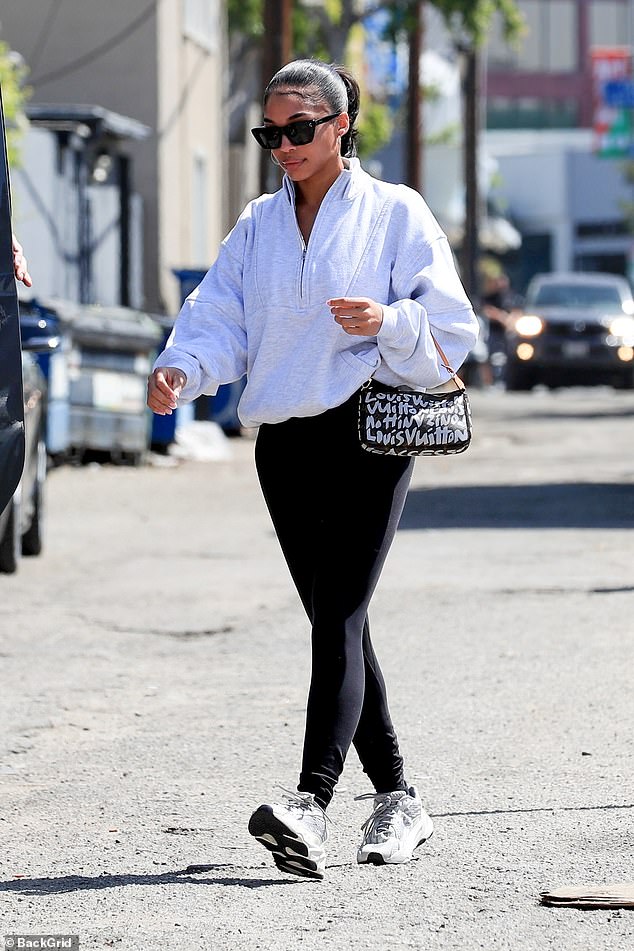 Sporty: Although the temperatures around the city were rising, she still covered up in a thick gray sweatshirt that hung loosely on her slim frame, plus black leggings and white trainers

Lori had her lustrous raven locks swept back and fanned out, with some strands held in a high ponytail.

Later on Tuesday, the rising star was seen arriving at a Forma Pilates class in Los Angeles.

Although the temperatures around the city were rising, she still covered up in a thick gray sweatshirt that hung loosely on her slim frame.

Lori paired it with black leggings and white-and-gray trainers, and she carried a small black Louis Vuitton handbag covered in a messy white scrawl on her arm.

The SKN by LH founder had her hair tied back in a ponytail, highlighting her chunky black sunglasses and her hoop earrings.

As she left the studio, she carried a bottle of water to help her rehydrate.

Days earlier, Lori had noted on Instagram that she was having her ‘First workout in over a month’ at Forma, so she seems to be getting back into a regular workout routine. 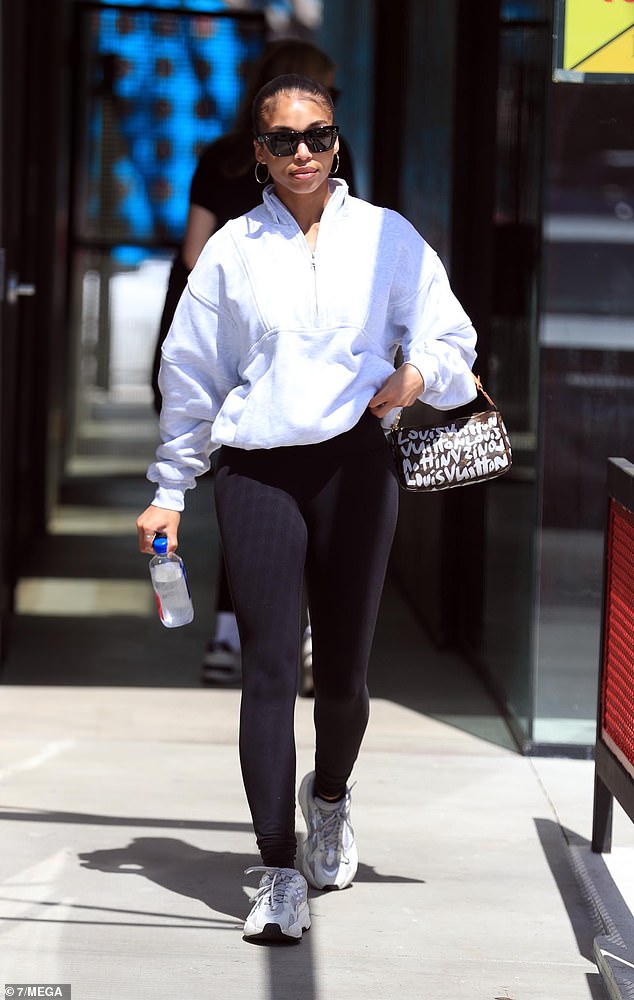 Low key: She carried a Louis Vuitton handbag and wore chunky black sunglasses and hoop earrings. Afterward, she rehydrated with a bottle of water

Lori’s low-key self-care comes after she made her red carpet debut with her boyfriend Michael B. Jordan at the Vanity Fair Oscars Party.

Both she and her love opted for luminous ensembles, with the Creed star wearing a tuxedo made of a lustrous material, while she glittered in a sheer Tony Ward Couture dress made of loosely woven gold fabric decorated with sparkling jewels.

She completed the look by elevating her 5ft3in stature with towering Jimmy Choo heels.

The lovebirds have been an item since November of 2020, but they’ve taken their time go public with their romance, and this marked their first time together on a red carpet.

Following the party, the two crossed a picket line to attend Jay-Z’s after-party at the Chateau Marmont, according to The Hollywood Reporter.

The hotel is being protested by workers alleging that systemic racism and sexual misconduct have gone on unchecked at the hotel for years, though that didn’t dissuade the rapper form holding the party. 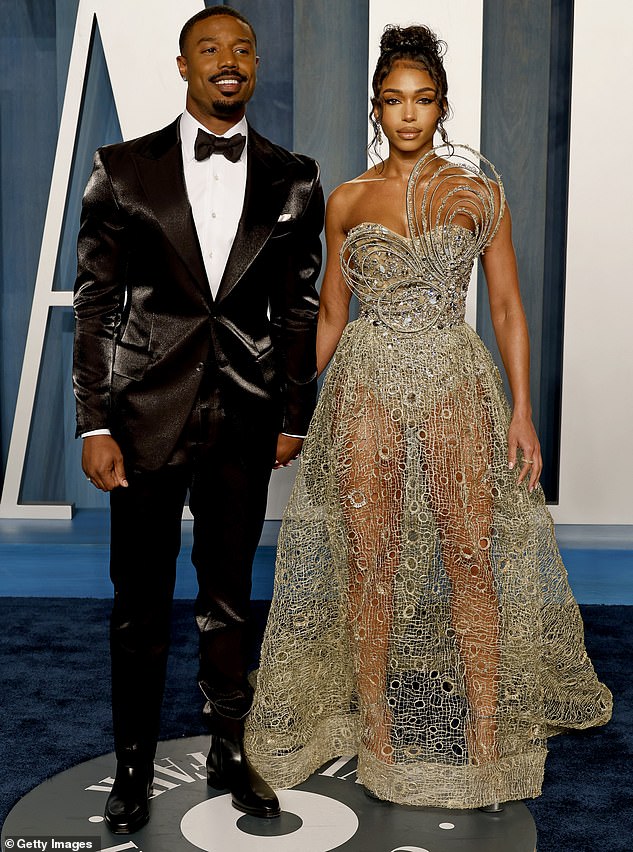 Wow couple:  Michael B. Jordan and Lori Harvey wowed photographers and their fellow guests when they attended the 2022 Vanity Fair Oscar Party in Beverly Hills on March 27