Lottie Moss looked sensational on Sunday as she stripped down to her pale pink lingerie to show off her new tattoos.

The model, 24, took to Instagram to share the sizzling string of snaps with her 442,000 followers, flaunting her toned figure.

Posing up a storm in a giant mirror on a sun-drenched roof, she pouted for the camera wearing a heart-themed bra, knickers and a suspender belt around her waist. 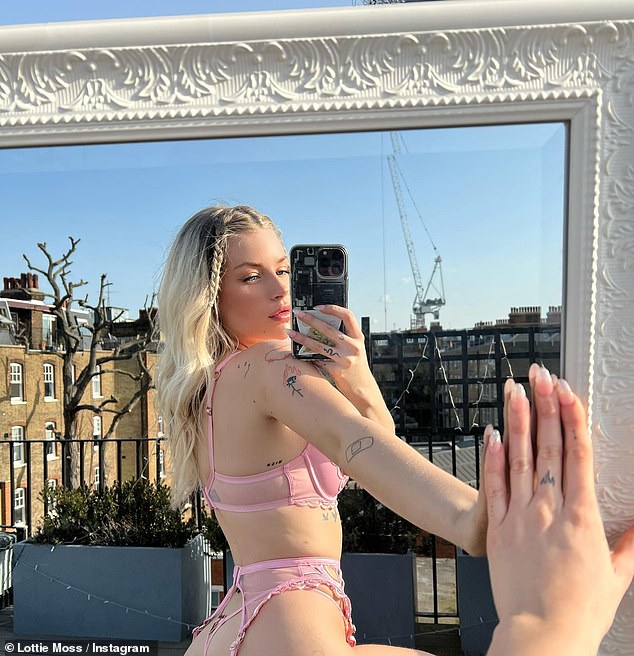 Fabulous: Lottie Moss looked sensational on Sunday as she stripped down to her pale pink lingerie to show off her new tattoos

Her impressive array of tattoos were on full display, as she debuted some new ink to her collection.

Her blonde hair was styled in soft waves with the front in tiny braids, while she sported a fresh face of makeup.

Captioning the scorching shots, she wrote: ‘Say hi to my new tattoos’.

Last week, the blonde bombshell revealed she swerved a nasty injury after accidentally setting her clothes on fire on a video shoot. 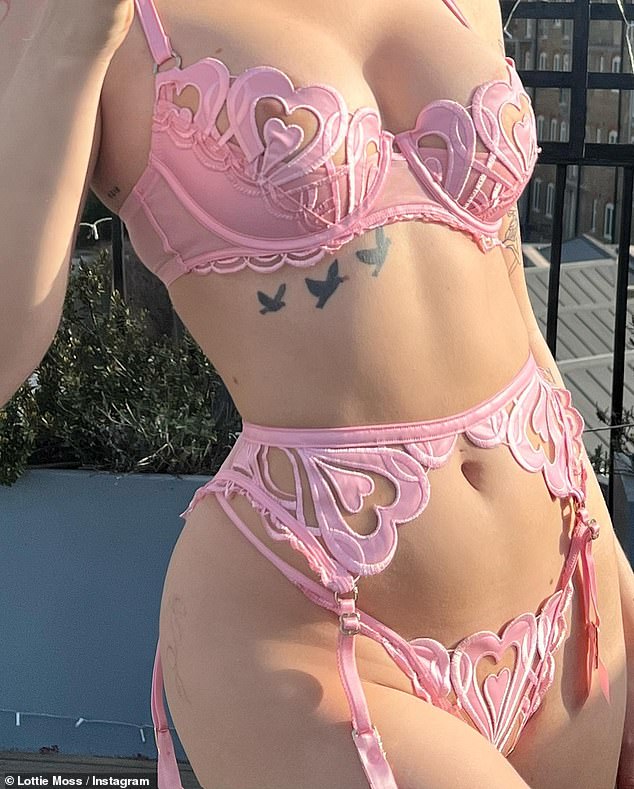 Phenomenal: The model, 24, took to Instagram to share the sizzling string of snaps with her 442,000 followers, flaunting her toned figure

The OnlyFans star was filming a video for The Kooks when her sleeve swept across a candle, causing it to burst into flames, and narrowly avoided any long-term damage.

While she described the incident as ‘crazy’, she insists she didn’t suffer as a result.

It comes after Lottie filmed herself smoking marijuana in a video for OnlyFans, two weeks after leaving rehab, where she was treated for cocaine addiction. 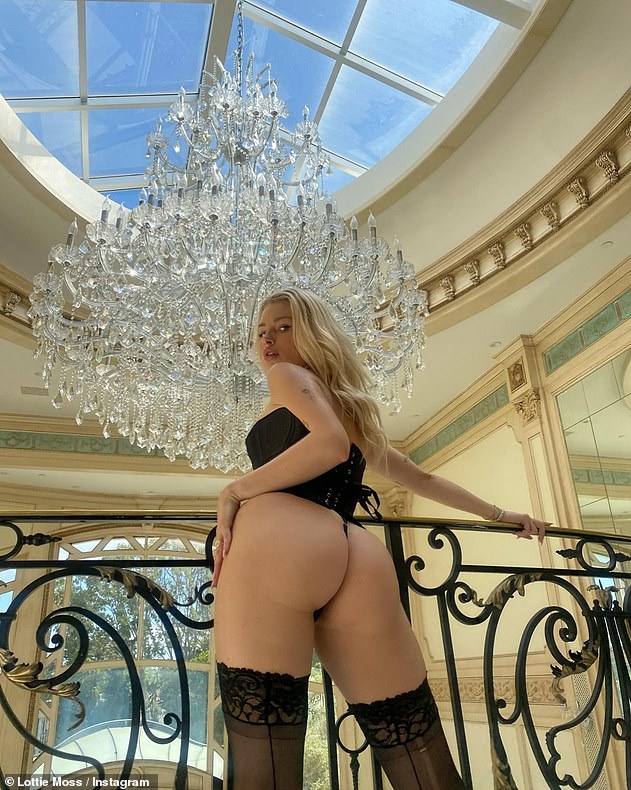 Sultry: Lottie is known for putting on racy displays on social media and flaunting her figure on her OnlyFans page

The social media creator revealed subscribers to her X-rated account had requested videos of her smoking, and so she obliged in a half hour long video.

She also flashed her breasts, answered fans’ questions about her life and showed off her sex toys. 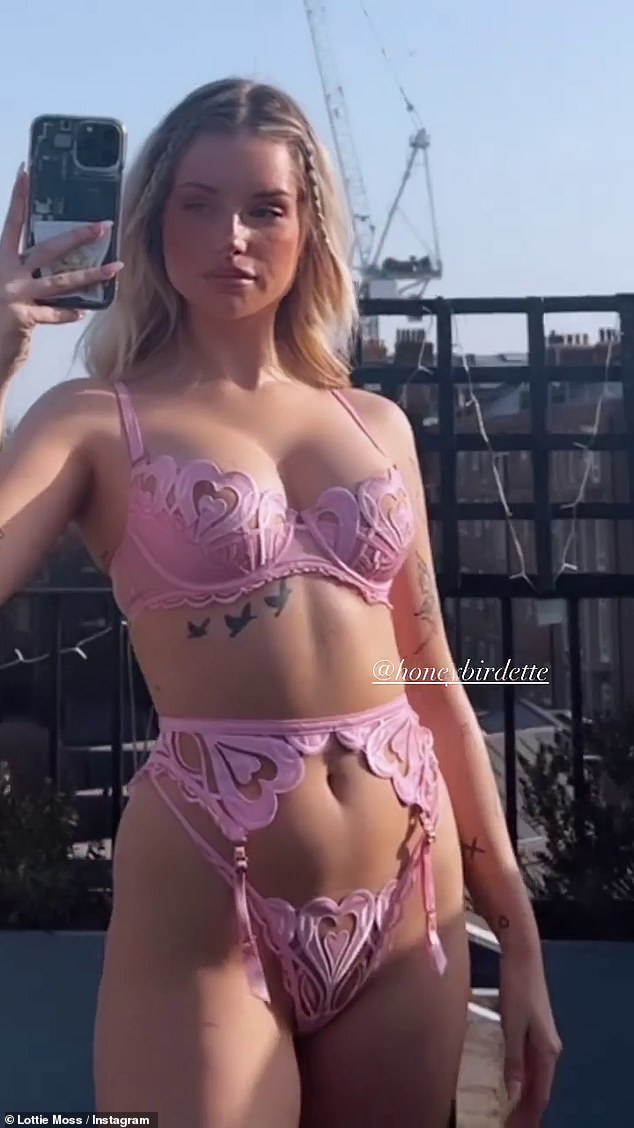 Sexy display: Lottie took to Instagram this week to share snaps of herself in the same slinky pink lingerie as she filmed herself on a rooftop

She began her livestream by announcing: ‘I’ve been asking what people want to see and a lot of you said smoking… Who else smokes on here? Light one up for me!’

She later added: ‘You guys are smoking a joint with Lottie,’ and announced: ‘I’m getting the munchies so bad. I’m so high right now I cant even lie to you guys.’

Lottie also addressed her recent stint in rehab, stating that her tolerance for marijuana had lowered since she left the treatment facility.

She stated: ‘I want to smoke more but I’m already so f***ing high. It only takes like four puffs to get me stoned.

‘I was away for like a month in rehab for separate issues – like mental health stuff – I like being open about that stuff, I think it’s so important.

‘But yeah I was away and I couldn’t smoke weed in there because you cant take drugs, but I’m happy that I can now, because it just really helps me with relaxing and stress – I have a lot of anxiety…

‘I’m so high right now. My tolerance with weed went straight down when I went to rehab but I’m so much better. I was very depressed and very unhappy but I’m so much happier now. I’m feeling better about life.’ 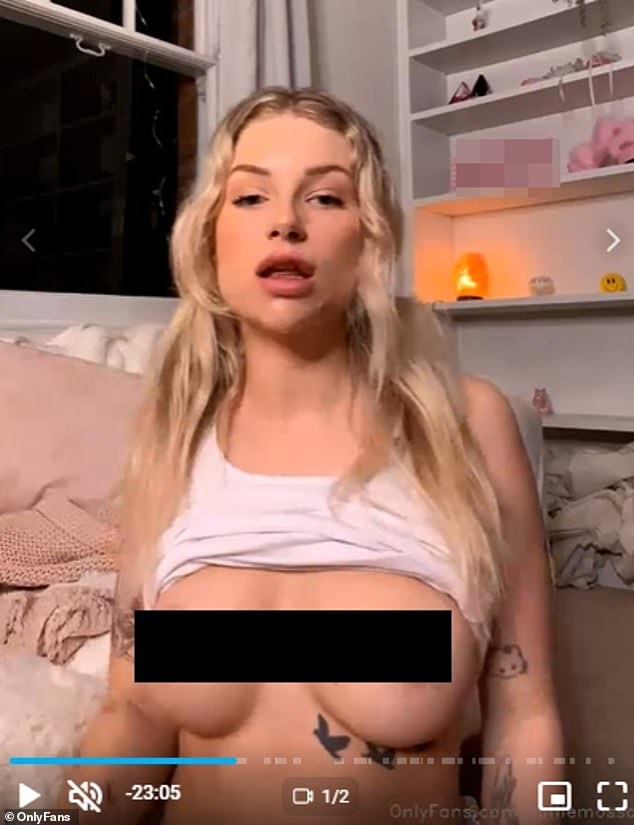 Baring all: It comes after the model revealed subscribers to her X-rated account had requested videos of herself smoking, and so she obliged in a half hour long video

Elsewhere in the livestream, Lottie asked her viewers to give her tips, stating that she wouldn’t show off her breasts until she’d made at least $50 (£38).

She also discussed her sex life, telling her followers that she had slept with hundreds of people.

The bisexual influencer said of her number of sexual partners: ‘Mine is well above what it should be. I liked to have fun in my past. I used to go out a lot and have lots of funs with guys, but I’ve kind of calmed down. It’s probably in the hundreds.’

Lottie then went on to tell her followers that the ‘most risky’ place she’d had sex was inside a bathroom of a train, noting ‘I’m pretty loud.’

The younger sister of supermodel Kate Moss also made the disturbing confession that she had slept with a man in his 30s when she was under the age of 16.

Asked the age of the eldest person she had slept with, Lottie responded: ‘I f**ked someone when I was underage – that’s probably not a good thing to say – someone who was like 35. I think a 15 year, 20 year age gap.’

She also asked for advice on whether she should get another boob job, admitting she was considering increasing her cup size, six years after first getting them enhanced at the age of 19.

Lottie then made the revelation that she is moving to Los Angeles in order to do more work with her OnlyFans account.

She explained: ‘I need cheering up. I’m having a very stressful time at the moment. I’m moving to LA soon – in two weeks.

‘I’m moving to get more content. Lots more people do OnlyFans out there. London just isn’t for me. I’m moving with Megan Barton Hanson and we’re going to live in the same apartment and shoot content together. It’s going to be so hot.’

Detailing her plans, she continued: ‘I’m going to do more variations, more girl on girl. I’m not sure if I would do anything more intense but definitely more girl on girl like kissing and stuff.’ 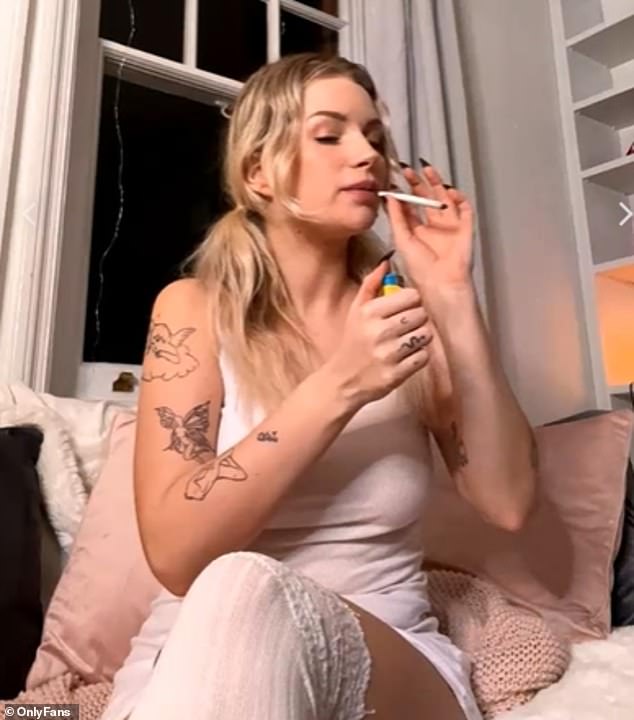 Shocking: It comes after Lottie Moss filmed herself smoking marijuana in a video for OnlyFans just two weeks after leaving rehab

Lottie’s decision to move abroad comes after it was revealed that she has been axed by her modelling agency Storm.

Sources close to Storm Management suggest that the firm, which has nurtured the careers of many successful young models including Cara Delevingne , 29, may have finally run out of patience with Lottie and permanently cut ties with her.

As well as deleting her portfolio from the company’s website, Storm haven’t posted about Lottie to their Instagram profile, which is followed by 439K fans and industry professionals, since September 2020. 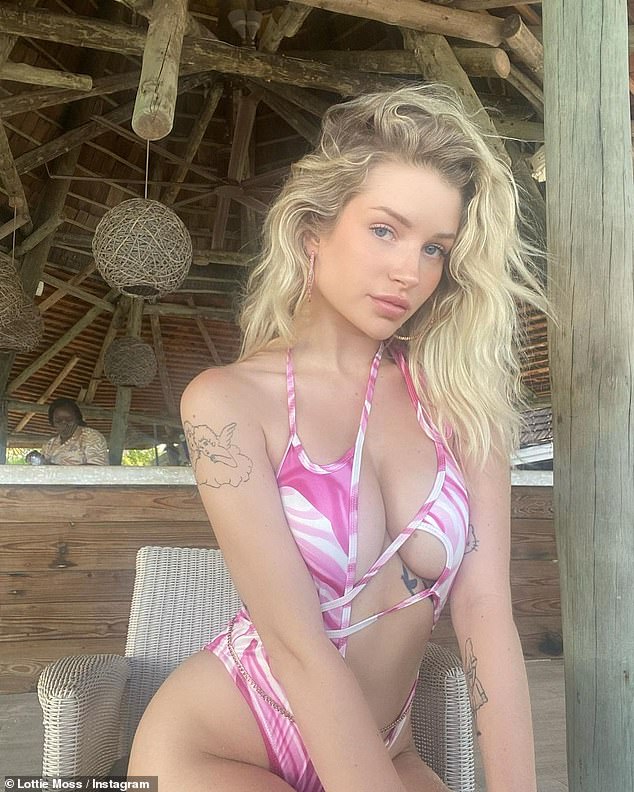 Disturbing: The younger sister of supermodel Kate Moss also made the disturbing confession that she had slept with a man in his 30s when she was under the age of 16

Lottie, in turn, has removed all mention of Storm from her social media where she now states that she is represented by We Are Verified, an independent agency based in Los Angeles that looks after social media influencers.

A fashion source told MailOnline that the company was forced to distance itself from Lottie after she confessed to having a ‘really bad addiction to cocaine’ and checked herself into rehab.

There was also growing concern amongst industry bosses over the amount of cosmetic surgery she has undergone when Storm models are banned from drastically altering their appearance. 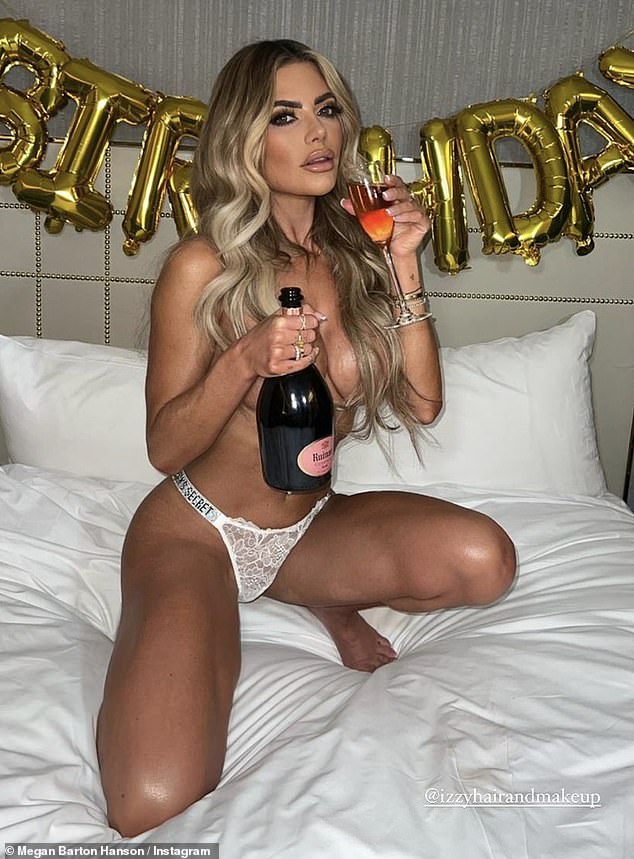 Co-creator: Lottie also revealed that she will be moving to Los Angeles with Love Island star Megan Barton Hanson to shoot racy ‘girl on girl’ content for OnlyFans

An insider revealed: ‘Lottie got caught up in the world of partying and drug taking and even confessed to having a cocaine addiction on social media.

‘She left Storm Management with no choice but to sever ties because that’s not the way they operate.

‘They are known for launching the successful careers of hundreds of models and the association with Lottie was beginning to tarnish their reputation.

‘Her partying lifestyle, sexualised content on Instagram, and her OnlyFans profile, made it impossible for Lottie to be signed for high fashion campaigns with the likes of Chanel and Calvin Klein, who she’s previously worked for.’ 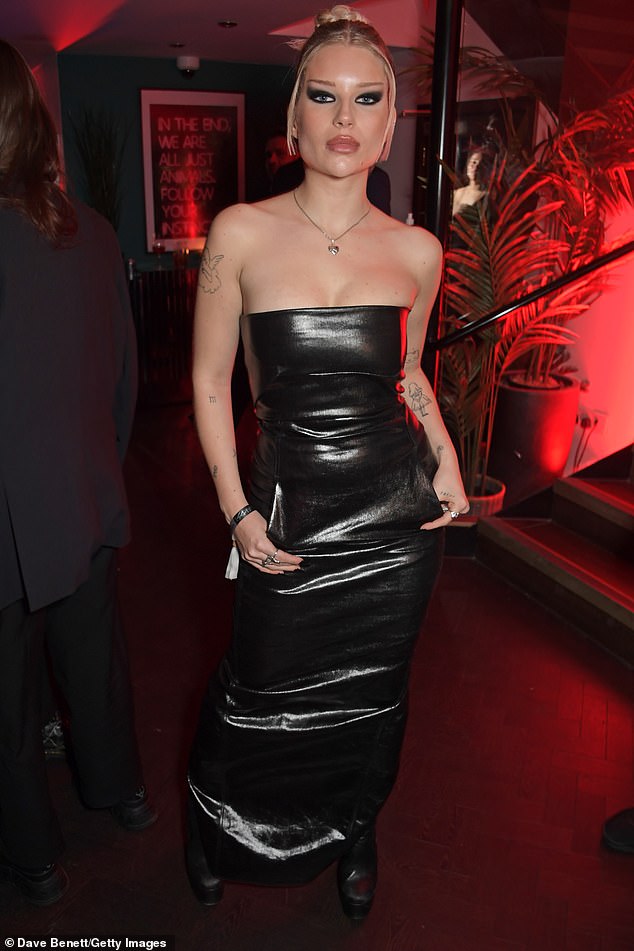 No more: Lottie’s decision to move abroad comes after it was revealed that she has been axed by her modelling agency Storm