Louise Thompson has admitted she hit rock bottom and began to understand why people take their own lives as she shared a candid Instagram post on Monday.

The former Made In Chelsea star, 31, welcomed her son Leo-Hunter with her fiancé Ryan Libbey, also 31, in December but was left in intensive care for five weeks following serious complications.

She has since battled with post-traumatic stress disorder (PTSD) and depression, and admitted in her update with fans that she is ‘not even close to feeling like a normal person yet.’ 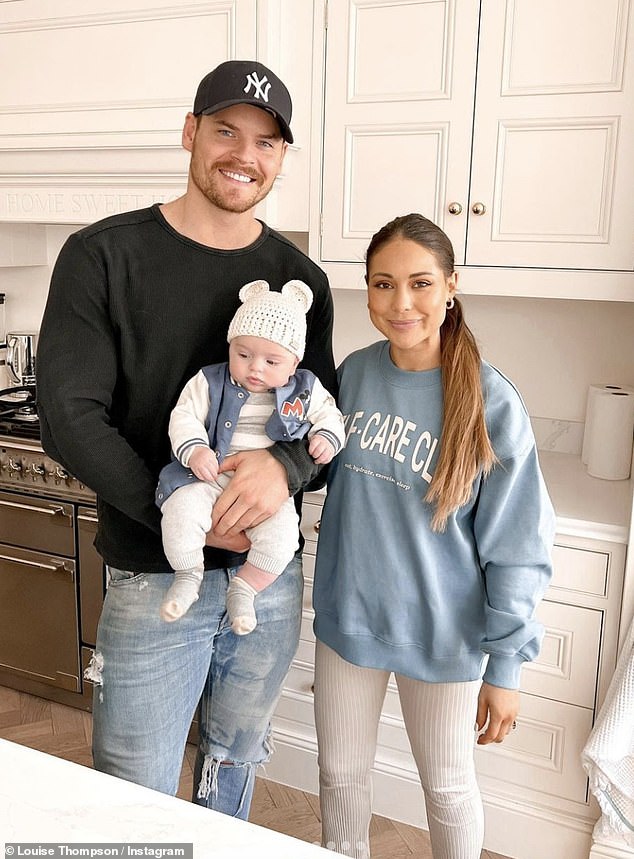 In the photographs Louise stood by Ryan’s side as he cradled their son in his arms.

The reality TV star revealed that she has felt ‘scared, confused and paralysed’ since speaking out about her difficulties last month.

Alongside the photos she penned a lengthy caption: ‘Where the hell have the last three months gone? Leo turns 15 weeks today and my brain can’t comprehend it.

‘The last time I properly opened up about my trauma was on the 15th of January and I haven’t felt strong enough to talk about it since.’

She added: ‘If I could use a few words to describe the past month they would be: SCARED, CONFUSED, PARALYSED, AND TOTALLY OUT OF CONTROL.’ 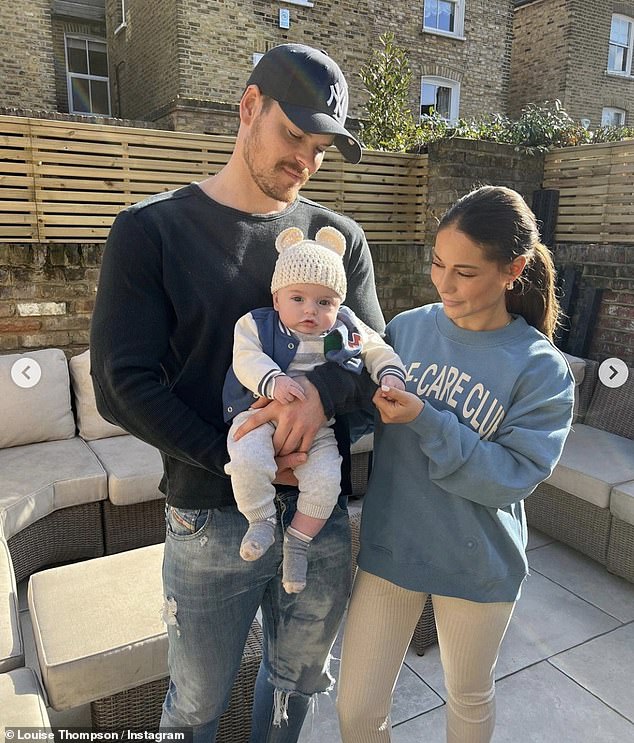 Complications: The former Made In Chelsea star, 31, welcomed her son Leo-Hunter with her fiancé Ryan Libbey, also 31, in December but was left in intensive care for five weeks

Louise gave an insight into the condition as she explained PTSD and her experience.

She said: ‘My brain keeps deleting memories in order to try and protect itself and it’s so scary. Trauma and fear have no understanding of time.

‘I remember a therapist told me that a few months ago and I didn’t understand what she meant. Now I do. 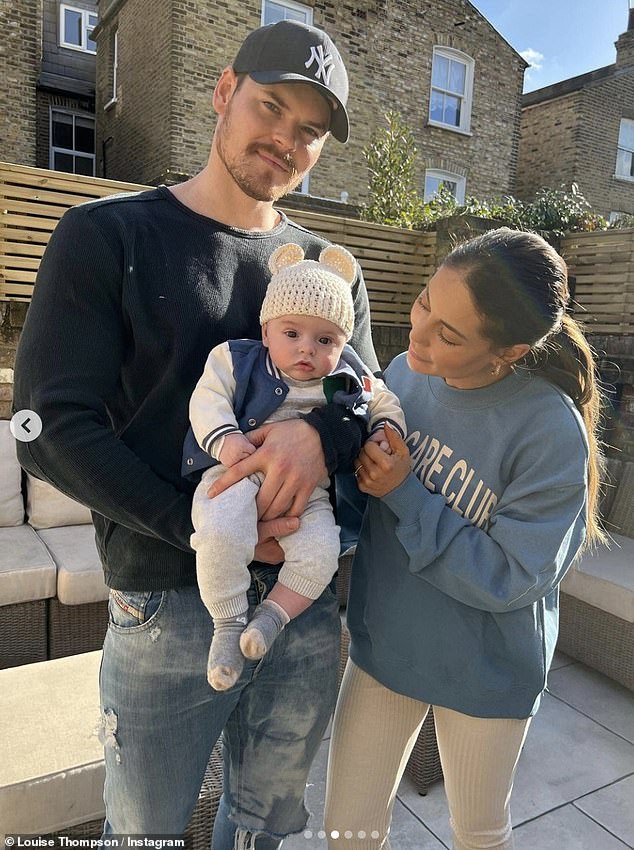 Distressing: In the photographs Louise stood by Ryan’s side as he cradled their son in his arms. The reality TV star revealed that she has felt ‘scared, confused and paralysed’

She continued: ‘To be honest I’ve been too scared to post about how I’m feeling because I’m not even close to feeling like a normal person yet. I remember when I first posted about PTSD I got really triggered by comments saying it could take 6/9 months to process and I HATED hearing that.

‘I stopped reading everything. I’ve had to block out any health related content to protect myself. Now I have come to terms with the fact that my life might never be the same again, but things honestly can’t get any worse than they’ve been over the past month so hopefully i’m at the beginning of my actual recovery.

‘I have had to learn an incredible amount of patience (something I never ever had before). Perhaps one of the only good things to come out of this? The only other thing that might be beneficial one day (remarkable that i’ve even reached a point where I can think about my future) is that I might be able to help encourage other people to keep on going. DON’T GIVE UP. JUST KEEP LIVING. ONE MORE DAY.’

She added: ‘I thought that living in hospital for a month was the worst time of my life. Wow I was wrong. I had control over my mind then.’

After her near death experience Louise added that since returning home five weeks later the ‘real hell began.’

She admitted: ‘Something happened about a month ago where my mind and body came crashing down in tandem. I guess I had been in self preservation mode/survival mode up until that point. Then the real mental health hell began.’

Louise then went on to list some of the ways her mental health has impacted her daily life. 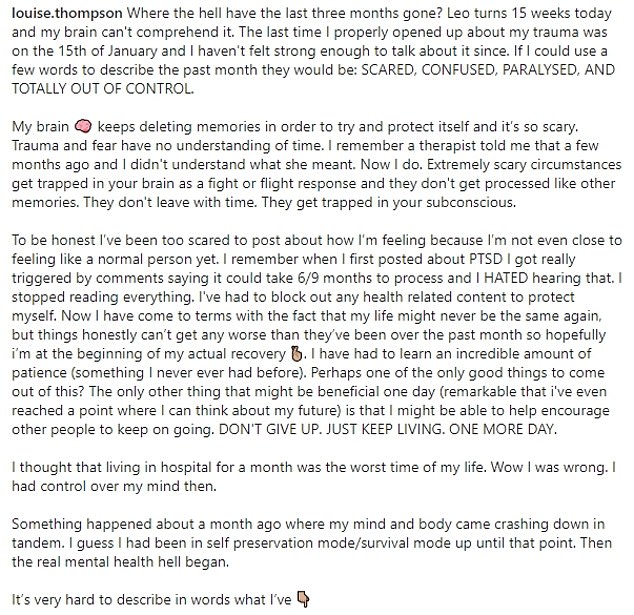 Heartbreaking: Speaking about her battle with PTSD and depression, she admitted in her update with fans that she is ‘not even close to feeling like a normal person yet’

She explained: ‘It’s very hard to describe in words what I’ve been going through but I have buckets and buckets of notes I’ve written to myself which I will look back on when I’m feeling better or at least a bit more like ‘Louise’. ⁣⁣

‘These are just some of the ways in which mental health has gripped me, and I wouldn’t expect you to understand unless you have experienced a debilitating mental illness but here goes:⁣⁣ – I’ve been petrified of my cupboards⁣⁣ / I’ve battled a phobia of my fridge and bathtub⁣⁣ / I’ve felt so disconnected from reality it’s very scary⁣⁣ 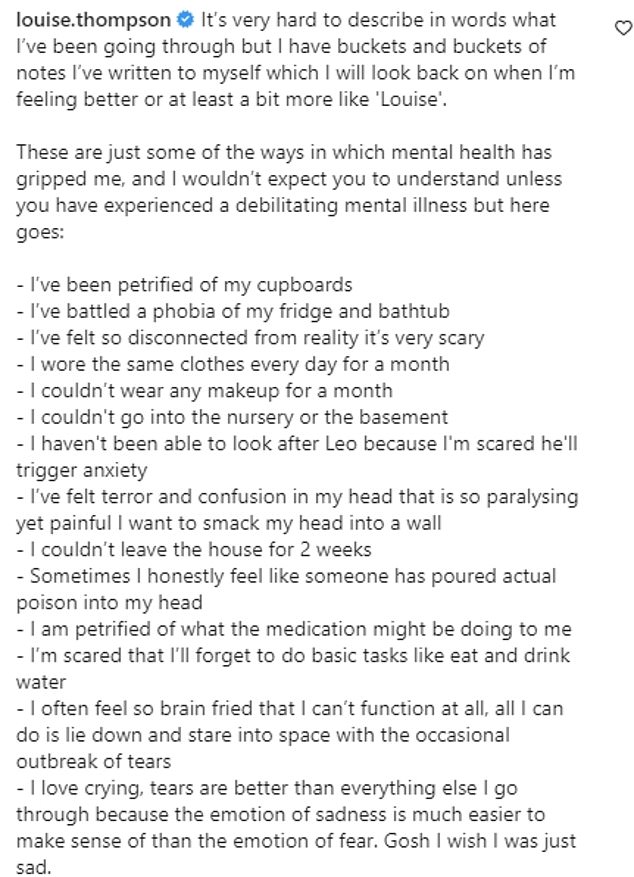 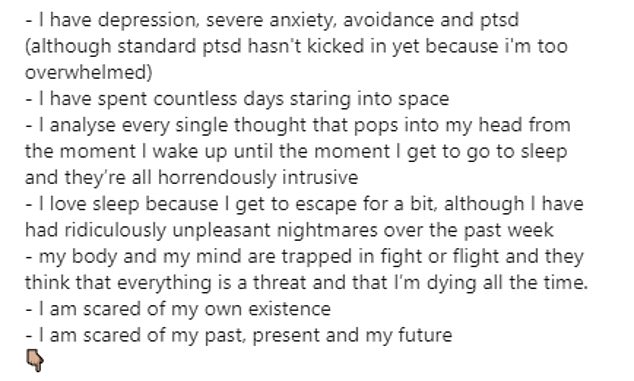 Daily struggles: Louise then went on to list some of the ways her mental health has impacted her daily life

‘I often feel so brain fried that I can’t function at all, all I can do is lie down and stare into space with the occasional outbreak of tears⁣⁣ / I love crying, tears are better than everything else I go through because the emotion of sadness is much easier to make sense of than the emotion of fear. Gosh I wish I was just sad.⁣⁣

‘I have depression, severe anxiety, avoidance and ptsd (although standard ptsd hasn’t kicked in yet because i’m too overwhelmed)⁣⁣ / I have spent countless days staring into space⁣⁣ / I analyse every single thought that pops into my head from the moment I wake up until the moment I get to go to sleep and they’re all horrendously intrusive⁣⁣

‘I love sleep because I get to escape for a bit, although I have had ridiculously unpleasant nightmares over the past week⁣⁣ / my body and my mind are trapped in fight or flight and they think that everything is a threat and that I’m dying all the time /  I am scared of my own existence⁣⁣ /I am scared of my past, present and my future⁣⁣

‘In the night I wake up (even with the help of sleeping aids) moaning and crying because I’m in torture⁣ / I haven’t been able to feel, smell or taste anything in ages. My senses are all blocked.⁣ / Sometimes I feel like I have electric shocks in my head⁣

‘We now require a lot of help because often I’m too scared to look after little Leo because I’m worried he will remind me of what happened to my body⁣ / I’ve screamed and cried at being asked to put clothes away in my cupboard because my mind won’t let me do it, it won’t allow me a spare second to concentrate on anything but suffering⁣ 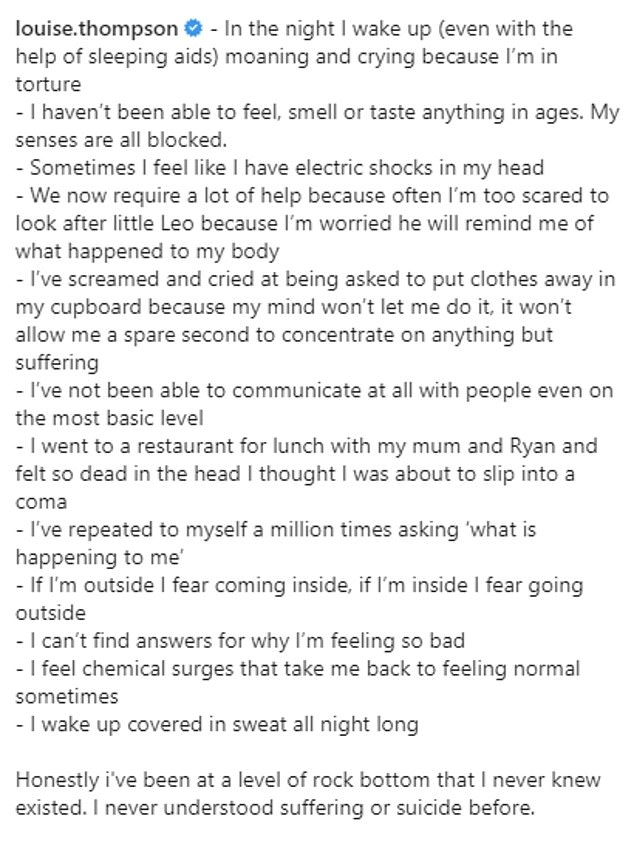 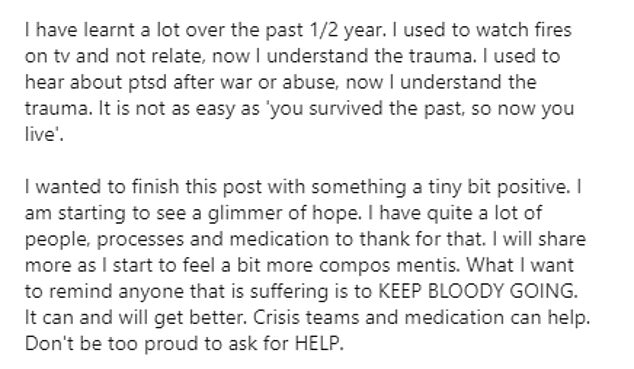 Conclusions: She concluded her post by stating: ‘I wanted to finish this post with something a tiny bit positive

‘If I’m outside I fear coming inside, if I’m inside I fear going outside⁣ / I can’t find answers for why I’m feeling so bad⁣ / I feel chemical surges that take me back to feeling normal sometimes⁣ /I wake up covered in sweat all night long⁣.’

Louise went on: ⁣’Honestly I’ve been at a level of rock bottom that I never knew existed. I never understood suffering or suicide before.⁣⁣

She concluded her post by stating: ‘I wanted to finish this post with something a tiny bit positive. I am starting to see a glimmer of hope. I have quite a lot of people, processes and medication to thank for that.

‘I will share more as I start to feel a bit more compos mentis. What I want to remind anyone that is suffering is to KEEP BLOODY GOING. It can and will get better. Crisis teams and medication can help. Don’t be too proud to ask for HELP.’ 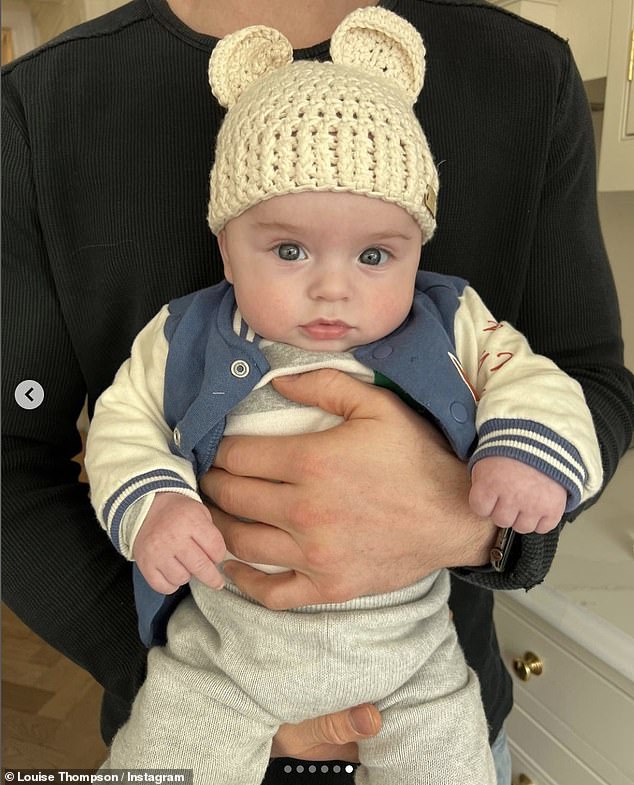 Cute: Louise gave birth to her first child back in November and spent five weeks in hospital suffering from complications after nearly dying during labour

Louise gave birth to her first child back in November and spent five weeks in hospital suffering from complications after nearly dying during labour.

On December 23, Louise admitted that she ‘never imagined that so many bad things could happen to me, but to dance with death twice brings a whole new view of the world – a stark reminder of how short and sacred life really is.’

While she confessed that she was ‘in a bit of a strange place mentally and physically,’ the new mum said that she was finally at a place where she could ‘see a future where I get to live peacefully on this earth with my son.’

Louise also spoke about how she was struggling with PTSD and explained how her ‘road to recovery won’t be linear’ as she noted the highs and lows over the past few days.

If you have been affected by anything in this story please contact Birth Trauma Association at birthtraumaassociation.org.uk 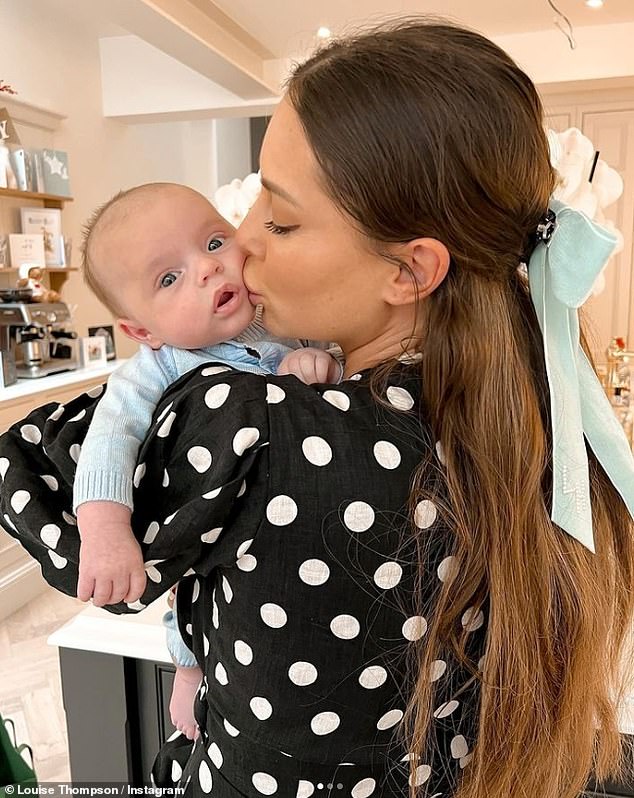 Tough: Louise previously revealed she is struggling to leave the house as she battles Post Traumatic Stress Disorder after nearly dying giving birth to her son