Love Island fans were left feeling suspicious when Tasha Ghouri confessed she had already been romantically linked to Charlie Radnedge, during Friday’s episode.

The model, 23, revealed she knows the newcomer, 28, since they previously matched with on dating app Hinge, in an admission to the others girls.

In the shared dressing room, she said: ‘Girls, I recognise Charlie from Hinge,’ which prompted Indiyah Polack to shout, ‘No way!’ 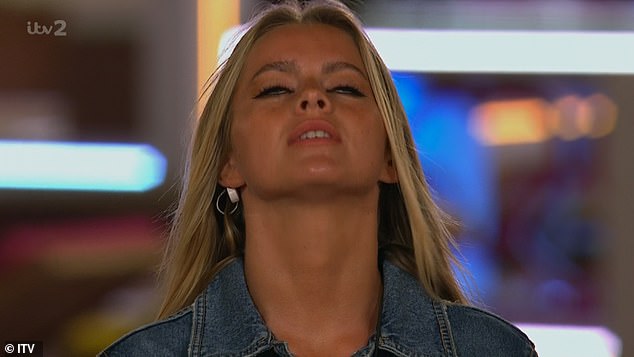 ‘The world cannot be this small!’ Love Island fans were left suspicious when Tasha Ghouri confessed she had already been romantically linked to Charlie Radnedge in Friday’s episode

Skeptical fans soon flooded Twitter with their thoughts, with some joking that ‘the world cannot be this small’, noting that Jacques O’Neill and Davide Sanclimenti had previously interacted on Instagram before entering the villa.

Since Tasha and Charlie went on a date in the installment, others slammed her for ‘risking’ her coupling with Andrew Le Page for a ‘failed Hinge thing’.

They wrote: ‘I refuse to believe Tasha knows Charlie from hinge. The world is not this small for this, jaques and Davide knowing each other on the gram and an ex of an islander to be in the villa. #loveisland.’ 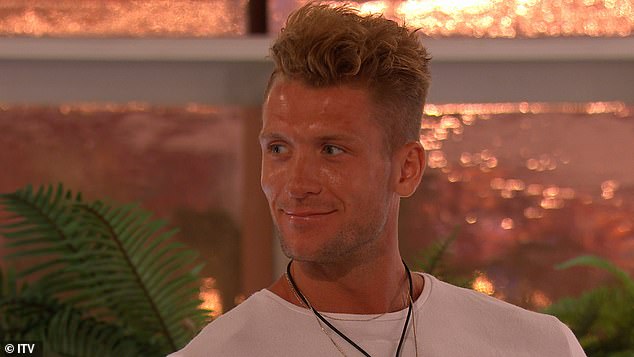 Coincidence? The model, 23, revealed she knows the newcomer, 28, since they previously matched with on dating app Hinge, in an admission to the others girls 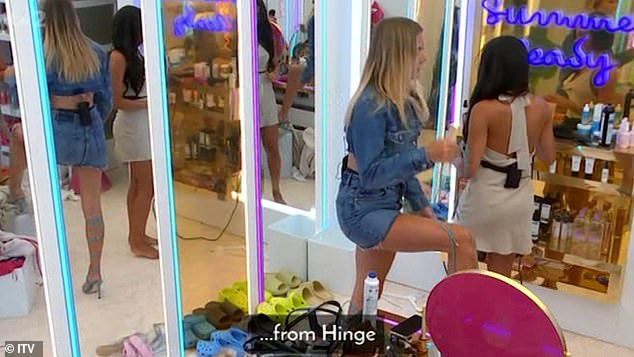 Wow! In the shared dressing room, she said: ‘Girls, I recognise Charlie from Hinge’ 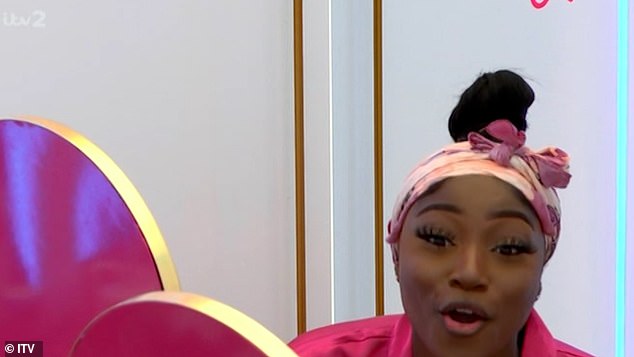 Shocked: This prompted Indiyah Polack to shout, ‘No way!’

‘If you didn’t match with him on hinge why are you risking it all for him on TV?? #loveisland.’

The latest recoupling proved to be its most dramatic yet, as a furious Tasha slammed the boys ‘rude’ reaction after she was once again chosen by Andrew over bombshell Charlie. 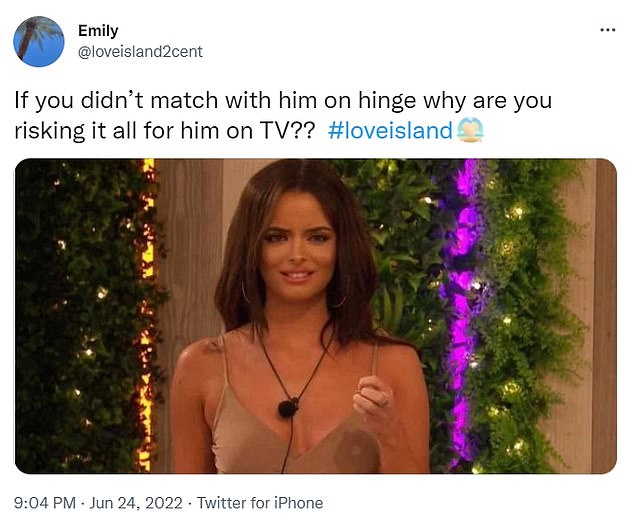 Dubious: Skeptical fans soon flooded Twitter with their thoughts, with some slamming her for ‘risking’ her coupling with Andrew Le Page for a ‘failed Hinge thing’

Dramatic scenes saw Tasha break down in tears after learning the boys had cast doubt on her romance with Andrew, noting her head had been turned by every new man that had entered the villa after she confessed she was open to get to know Charlie.

Despite this, Charlie decided to pursue a different connection with Ekin-Su Cülcüloğlu leaving the rest of the Islanders stunned, while Jay Younger made a bold move, stealing Paige Thorne from Jacques.

Andrew was keen to find out how Tasha’s date with Charlie went, and she explained: ‘I went in with a complete open-mind to see what happens. It was a good date. He’s a good-looking guy,’ before confessing she felt she’d ‘lost herself’ since she first entered the villa nearly three weeks earlier. 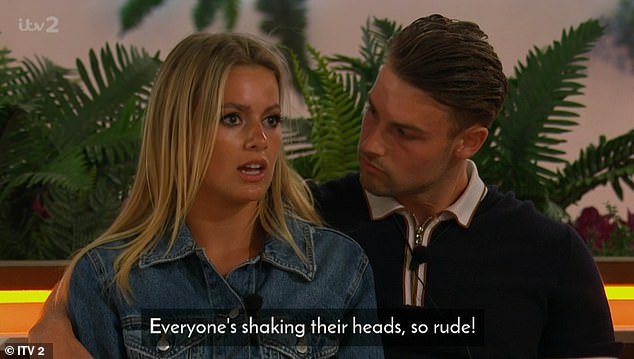 Furious! The latest recoupling proved to be its most dramatic yet, as a furious Tasha slammed the boys ‘rude’ reaction after she was once again chosen by Andrew over bombshell Charlie

But after Tasha admitted to enjoying the date with the new bombshell, Andrew was left disheartened ahead of the recoupling, and the boys quickly noted it was clear how much he liked Tasha.

Elsewhere Charlie had a chat with Ekin-Su about their date, and she later admitted she’s ‘excited to see how much time progresses,’ adding she’s ‘open’ to seeing what could happen with the new bombshell. 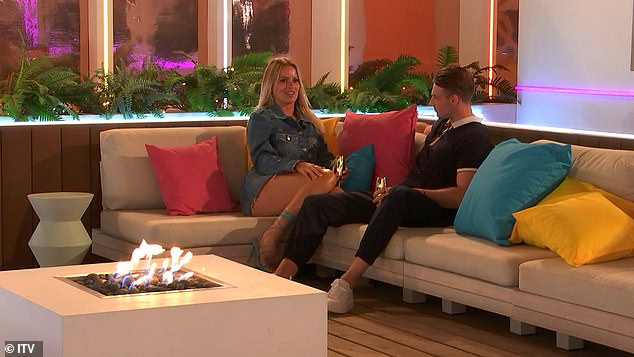 Information: Keen to find out how the date went, Andrew quizzed Tasha on the date as they had a chat afterwards

And as Andrew was left to sweat, Tasha had a chat with Charlie on the sun deck, where he asked ‘would you be open to seeing what would happen?’.

‘I wanted to see where your head’s at, really. I enjoyed the date today, it was good fun. We got on pretty well. If I were to pick you, would you be open to seeing what would happen or are you closed off to it?’

While a furious Andrew insisted he wasn’t going to stay in the villa and be ‘mugged off,’ Tasha tried to speak to him about his feelings, but when he questions why her feelings have changed so drastically, she walks away upset.

Love Island continues on Sunday at 9pm on ITV2 and ITVHub. All episodes are available the following morning on Britbox.

‘I haven’t got to swipe. So, hopefully they can just come to me now!

Who is their type on paper? ‘It’s quite hard to date without being influenced by social media and stuff like that.

‘Love Island is a great place to get to know someone one-on-one.

‘I don’t think I have ever been out with two guys who are quite the same.’

‘This is an opportunity for me to find ‘the one’ and have a great summer at the same time.

‘I’m definitely ready for a relationship. I’m 23 now so I’m ready to get to know someone and travel with them.’

Who is their type on paper? ‘I am open to finding love, I’m wanting to have a really fun summer.

‘I would say I’m fun, flirty and fiery. I think I’m good at giving advice, I’m a good person to talk to, I’m very honest.

‘If I want the same guy, I’d do it but in a nice respectful way.

Who is their type on paper? ‘When I’m with someone I’m very loyal.

‘I’m a good boyfriend as when I’m with someone I’m all for them.

‘I’m actually single for once, so I thought why not?

This is the best time to give it a go.’

Who is their type on paper? ‘I’m quite picky and I’m not just looking for looks, I’m looking for brains!

‘I’m looking for someone with intelligence, someone who can have good chats. Nothing like cockiness!’

Who is their type on paper? ‘I am a slow burner for sure, yeah. I don’t fall easily.

‘When I’m actually in a relationship, I think it’s a star sign thing.

‘I’m an Aries but I’m very passionate – I always used to put that person first. I’m really good at being in a team’.

Who is their type on paper? ‘A lot of English girls actually love me.

‘Find my person so I can actually build something in the future, grow with them, be a family. ‘

Who is their type on paper? ‘I prefer to meet girls out and about. I think when you go looking for it, it’s not as easy though, it’s like you’re too desperate for it.

‘If I think you’re the one or I like you, I’ll take you out on a date but other than that, if we talk and I don’t like where it’s going – then I won’t be throwing out dates.’

Who is their type on paper? ‘I think it needs to be the right person, at the right time.

‘I was saying to my mum the other day that I want a girl. And I’m now ready to settle down.’

Why Love Island? I’ve been single for almost a year and a half and for the whole of the last year my goal has been to have as many different experiences as possible.

Who is their type on paper? ‘I am the type of girlfriend that I want to do so much with you – deep conversations, silly activities.

‘If you say let’s go canoeing all day even though I am quite a glam girl, I am down for it.’ 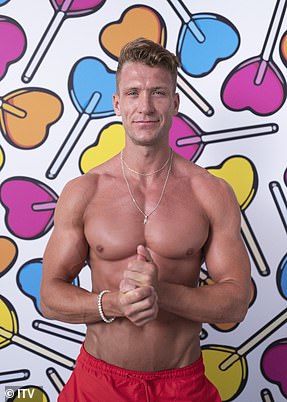 Why do you think you’re a catch? ‘I am probably slightly more mature than some other people in the Villa. I’ve got some things figured out. I think I’m ready to settle down, basically.’