Michael Owen’s daughter Gemma, 19, was voted by the public to couple up with Liam Llewellyn who revealed he is looking for ‘the one’ but it didn’t take long for the pair to clash and the brunette beauty to confess there was ‘something missing.’

Elsewhere Indiyah Polack was visibly unimpressed to be paired up with Ikenna Ekwonna, even refusing to disclose her ‘type’ to him while they attempted to get to know each other. 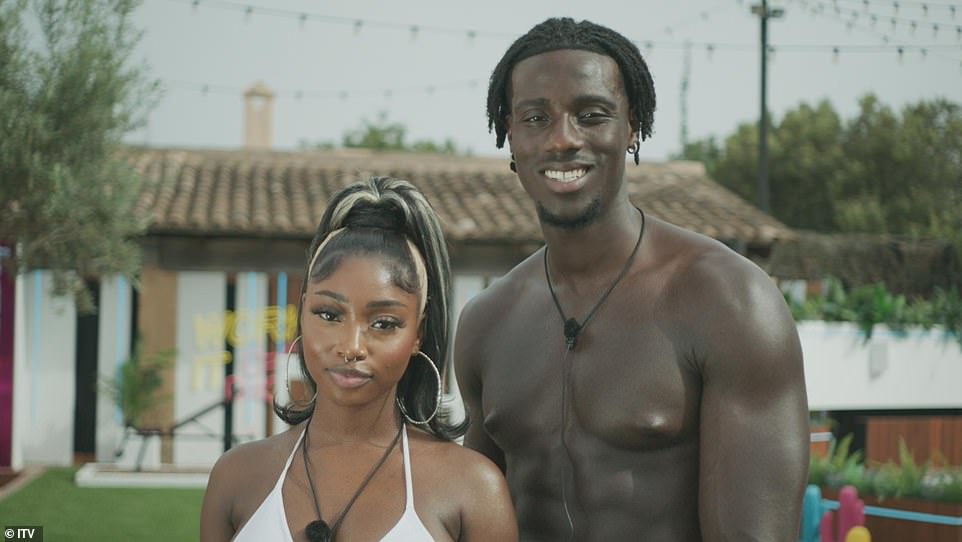 Trouble: Indiyah Polack has been coupled up with Ikenna Ekwonna – who could cause trouble as he revealed he would put romance before friendship

Indiyah has been coupled up with Ikenna – who could cause trouble as he revealed he would put romance before friendship – and the beauty gave little away in her initial reaction despite being visibly taken aback by his height.

Later settling down for a chat with Indiyah, Ikenna admitted she was a ‘tough one to crack’ as she refused to disclose her ‘type.’

Elsewhere, Amber Beckford and Dami Hope were paired up, and they certainly made for a stunning duo during the first dramatic coupling of the series. 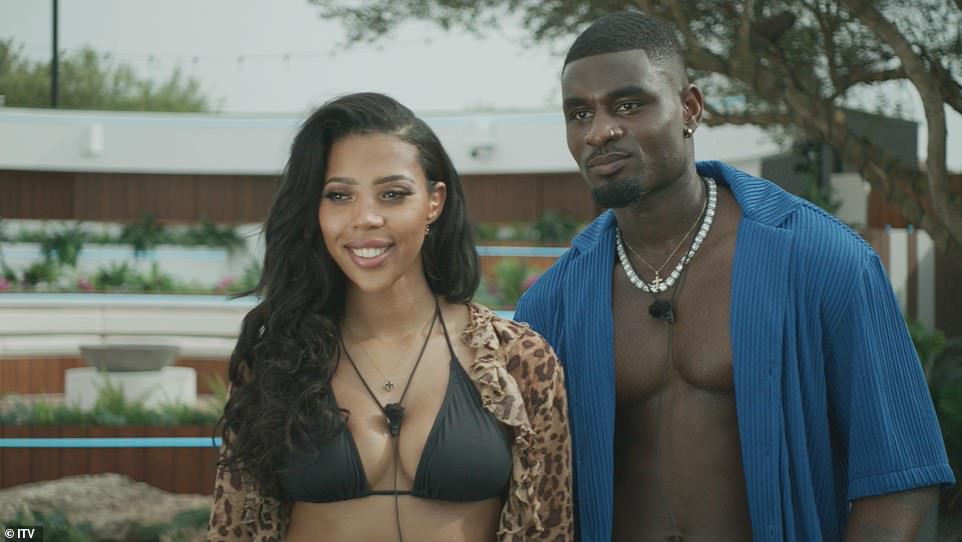 Looking good: Elsewhere, Amber Beckford and Dami Hope were paired up, and they certainly made for a stunning duo during the first dramatic coupling of the series

Revealing the girl he’d be coupling up with, thanks to the public vote, host Laura announced that it would Amber, who told her: ‘Yeah why not, I guess we’ll see!’

Dami could have competition as Amber previously admitted she has dated someone famous, but is the name a secret for now.

If the couple hit it off, Amber will have to win over Dami’s grandma as he said: ‘I don’t know how my grandma is going to feel if I find my wife on a TV show!

Elsewhere, after describing her appearance on the show as a ‘father’s worst nightmare’, it seems footballer Michael may want to cover his eyes as Gemma gets to know Welsh student Liam who admitted he needs to ‘scrub up on my more romantic side’. 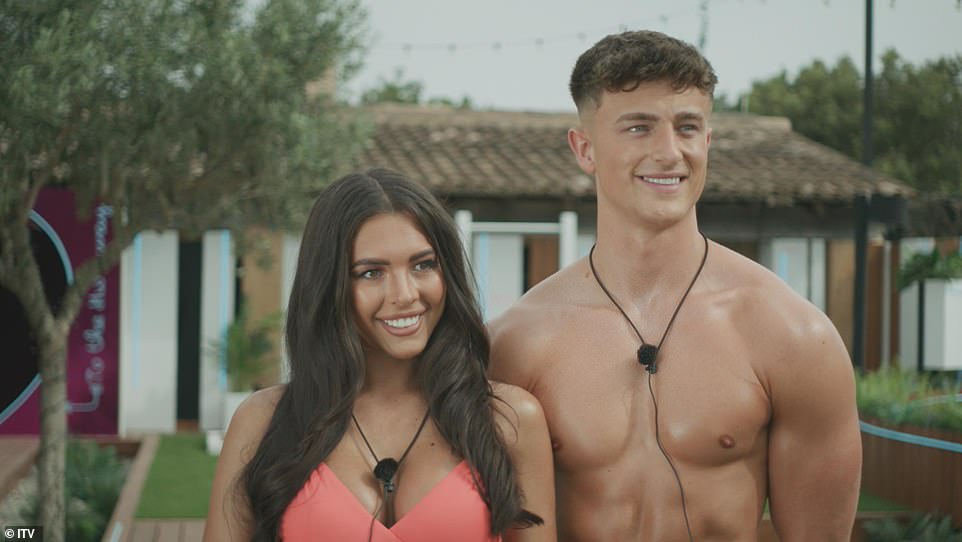 New couple alert! Gemma Owen and Liam Llewellyn coupled up on Monday’s first episode, but the frosty brunette didn’t waste any time clashing with the student while her head was turned by bombshell Davide Sanclimenti

The public may have thought they were spot on with this couple as Liam previously said his type on paper is ‘petite and brunette’.

But frosty Gemma didn’t waste any time clashing with Liam, refusing to bite when he asked whether she’d had ‘a relationship with a footballer,’ perhaps alluding to her famous father.

And within hours Gemma’s head was turned with the arrival of Italian bombshell Davide Sanclimenti, with the pair even sharing a brief smooch during a game of dares.

Next up, ITV viewers voted for Love Island’s first deaf contestant Tasha Ghouri to couple up with Andrew Le Page.

Tasha’s in for a treat as Andrew – who is a real estate agent from Guernsey – described himself as a romantic who likes to treat a girl, revealing he once surprised his ex with a trip to Paris.

Tasha, who is the show’s first deaf contestant, gushed she was ‘happy’ to be put with the ‘cheeky’ hunk. 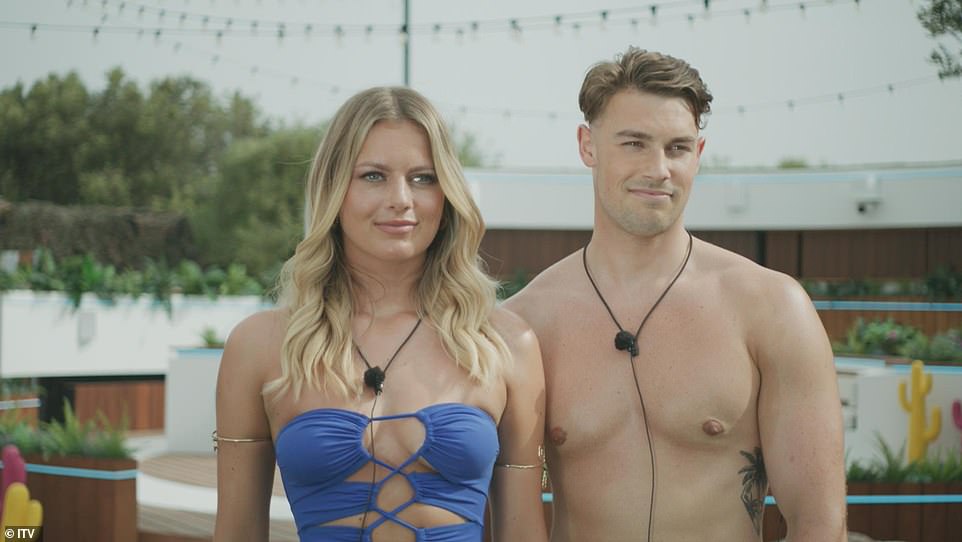 And finally, Paige Thorne is coupled up with Luca Bish, who will have to win over the paramedics dad if they stay together as he refuses to watch hisdaughter crack on this summer.

She will have to put up with Luca’s cheeky personality as he previously revealed he is going on the show with a ‘whatever happens, happens’ attitude when it comes to having sex in the villa.

The five stunning girls – Gemma Owen, Paige Thorne, Indiyah Polack, Tasha Ghouri and Amber Beckford – entered the lavish pad and had a chat over a glass of prosecco ahead of the hunks arrival. 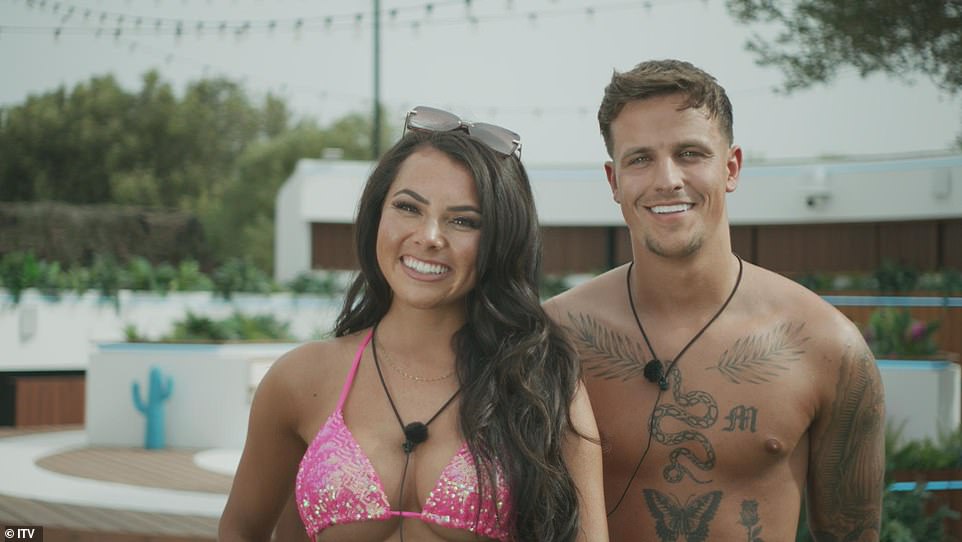 Couple: Finally, Paige Thorne is now coupled up with Luca Bish, who will have to win over the paramedics dad if they stay together as he refuses to watch his daughter crack on this summer

But as the girls lined up in front of the pool for their male co-star’s arrival, Laura dropped a huge bombshell, admitting that the first coupling was not going to go as they expected on the eighth series.

She reveals: ‘Well girls, it’s time to couple up. There is something I haven’t told you yet – things are a little different this year.

‘You thought you’d all be stepping forward for the boys you fancy the most. However, this is Love Island and you never know what to expect.

‘For the first time ever, we asked the public to play cupid and pick the boy they thought you should couple up with.’

The boys – Dami Hope, Liam Llewellyn, Ikenna Ekwonna, Andrew Le Page and Luca Bish – then make their entrance and begin to getting to know the girls. 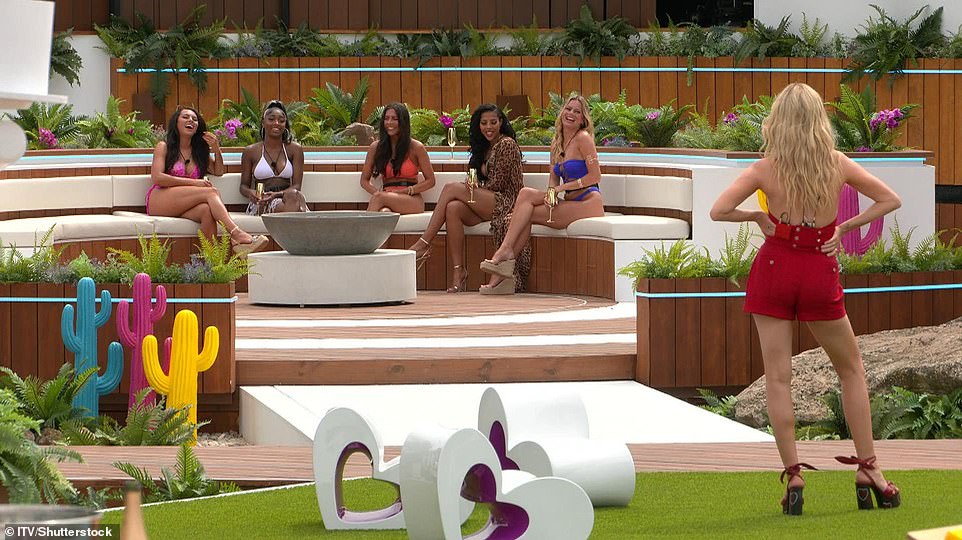 Exciting: The girls are seen sat round the infamous fire pit when host Laura Whitmore welcomes them to the ITV dating show, and does not shy away from asking the girls what their turn-ons and turn-offs are

As the contestants started to settle in to the Mallorca villa, Italian star Davide Sanclimenti makes his entrance as the first bombshell of the series and already began turning heads and ruffling feathers.

Speaking in the Beach Hut about Davide’s arrival, Gemma gushes: ‘I was blown away.’

While Indiyah admitted: ‘When I saw him, I was very confused because I had no warning but he is very good looking!’ 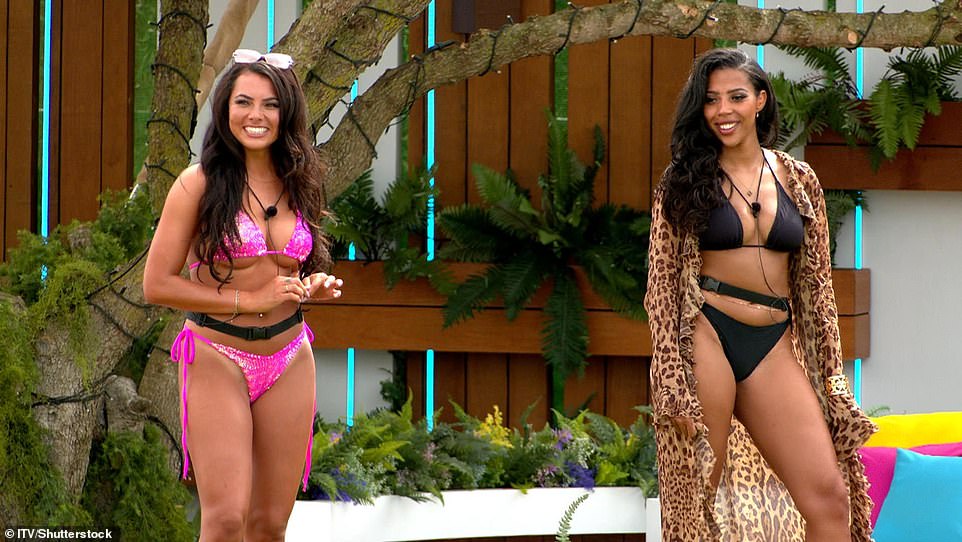 Shock: As the girls line-up in front of the pool for their male co-star’s arrival, Laura drops a huge bombshell, admitting that the first coupling is not going to go as they expected on the eighth series

And he appeared to catch the attention of Tasha too, as she says: ‘Straight away I was like, ‘Wow. Fit. Hot. Sexy. Hercules’.’

Talking about the overwhelmingly positive reaction from the girls, Davide says: ‘When I walked into the Villa, I saw all the girls and I’m really impressed, I’m not going to lie.’

But Davide kept the boys on their toes, as Luca admitted that he felt slightly nervous about his arrival when speaking in the Beach Hut.

The opening episode ended on a dramatic note, as Davide then receives a text which says he will have to couple up with the girl of his choice just 24 hours later, leaving male Islander single, and therefore vulnerable.

Love Island continues tomorrow at 9pm on ITV2 and ITV Hub. Episodes are available the following morning on BritBox.

I haven’t got to swipe. So, hopefully they can just come to me now!

Who is their type on paper? ‘It’s quite hard to date without being influenced by social media and stuff like that.

Love Island is a great place to get to know someone one-on-one.

I don’t think I have ever been out with two guys who are quite the same.’

This is an opportunity for me to find ‘the one’ and have a great summer at the same time.

I’m definitely ready for a relationship. I’m 23 now so I’m ready to get to know someone and travel with them.’

Who is their type on paper? ‘I am open to finding love, I’m wanting to have a really fun summer.

I would say I’m fun, flirty and fiery. I think I’m good at giving advice, I’m a good person to talk to, I’m very honest.

If I want the same guy, I’d do it but in a nice respectful way.

Who is their type on paper? ‘When I’m with someone I’m very loyal.

I’m a good boyfriend as when I’m with someone I’m all for them.

I’m actually single for once, so I thought why not?

This is the best time to give it a go.’

Who is their type on paper? ‘I prefer to meet girls out and about. I think when you go looking for it, it’s not as easy though, it’s like you’re too desperate for it.

If I think you’re the one or I like you, I’ll take you out on a date but other than that, if we talk and I don’t like where it’s going – then I won’t be throwing out dates.

When I’m actually in a relationship, I think it’s a star sign thing.

I’m an Aries but I’m very passionate – I always used to put that person first. I’m really good at being in a team’.

Who is their type on paper? ’22 is a really nice age to meet someone, you’ve got your years ahead of you so you have time to  grow together.

Love Island is a great opportunity to meet someone, you’re in with a load of different types so you can get to grips with what you really like.’

Who is their type on paper? ‘A lot of English girls actually love me.

Find my person so I can actually build something in the future, grow with them, be a family. ‘

Who is their type on paper? ‘I’ve only been in one past relationship but now I think I’m at the age where I could find someone.

I’m not really shy to speak to people I don’t really care too much about what people think.’

Who is their type on paper? ‘I don’t like guys that show off.

I don’t like flashy guys – just have a personality and make me laugh.

There was this one guy and he was trying to purposefully show off his car keys and we were literally in the middle of a restaurant!’