Wednesday’s crunch TV debate between the two candidates — their only face-to-face encounter during the campaign — was followed by heated criticism by Ms Le Pen, who has shown no hesitation in blaming the French President for having turned the country into “a failing democracy”, accusing him of wanting to “deconstruct” the nation-state, and warning voters he “will abuse” them if elected for a second term.

The National Rally candidate, in a seeming bid to undo some of the damage caused during the two-and-a-half-hour debate that, according to commentators made Mr Macron the clear favourite, took to Twitter to say her rival “does not like the French, especially those who do not agree with his policies because they suffer from them in their daily lives”.

The bitter remark came as fate twisted against her.

In an Ipsos survey released on the last day of campaigning before April 24, 57.5 percent of those polled said they intended to vote for the centrist incumbent president, against 42.5 percent for the right-wing populist contender. 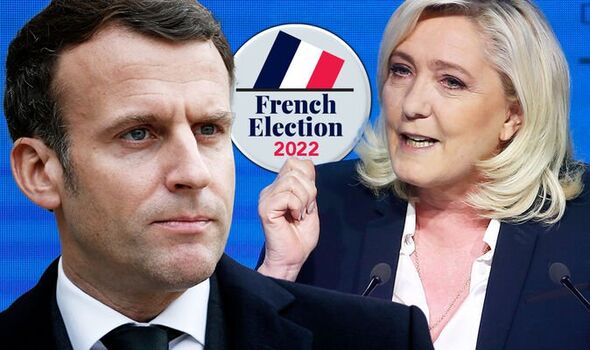 Marine Le Pen is fighting to convince voters to support her on Sunday (Image: Getty)

But the people seem to have made a choice already. A result along the lines of the Ipsos poll, even when allowing for a 3.3-point margin of error,

would give 44-year-old Mr Macron a convincing triumph.

Could they change their mind before returning to the booths? Of those who said they would vote for Mr Macron, five percent thought they may, as opposed to eight percent of those who intended to vote for Ms Le Pen.

However, in a sign of uncertainty about the final result, more than 40 percent of those who said they would cast a blank vote said they might still choose one of the candidates.

Meanwhile, an Opinionway survey showed turnout, at a predicted 72 percent, could hit a record low since the 1969 election called after the resignation of Charles de Gaulle and won by Georges Pompidou.

‘Macron will abuse you,’ Le Pen warns – but according to the polls the people don’t think the same (Image: Getty)

With only 15.5 million viewers on Wednesday night’s broadcast, the lowest figure since such debates began in 1974, that would be unsurprising and rather upsetting for Ms Le Pen, who warned the French: “For those who are tempted by abstention, I say: if you don’t go to politics, politics will come to you and catch up with you, with Emmanuel Macron, who will abuse you for years to come.”

“The time has come for you to rise up!

“The time has come for you to put an end to the race towards decline in which the leaders who have betrayed you have led you!

“The moment when you will be able to do yourself justice in the ballot box is approaching!

“The moment when you will be able to relegate the reign of these arrogant people to the rank of bad memory is Sunday!”

No matter the result, the French are set to protest (Image: Getty)

Abstention is indeed an issue in the battle for the Elysées’ top job.

Almost a quarter of the eligible population failed to vote in the first round two weeks ago, and about one-third of the 7.7 million left-wing voters who chose Jean-Luc Mélenchon on April 10 have said they will stay at home this weekend.

During Wednesday’s nearly three hours of discussion, Ms Le Pen touched upon cost of living, a European Union in need of reform, law and order and even a ban in public spaces on the Islamic headscarf.

She laid out some interesting facts and figures but in every instance had an answer from her opponent, who frequently interrupted her with “no, that’s not true” or “your figures are wrong, Madame Le Pen”.

Ms Le Pen, continuing her poignant criticism of a politician she considers arrogant to say the least, wrote on social media: “Since Emmanuel Macron wanted to reduce this election to a referendum, let’s do it!

“The question will be simple: Macron or France?”

If the polls’ projection comes true, it won’t be either one or the other; but whatever the result, the French will most likely take to the streets.