Film critics have praised Mads Mikkelsen for his performance in Fantastic Beasts: The Secrets of Dumbledore, after he stepped in to replaced shamed Johnny Depp in the franchise.

Mads, 56, took on the role of villainous wizard Grindelwald in the third film, which was released this month to critical acclaim.

Johnny, 58, was removed from the Warner Bros film a week into production when he was denied permission to appeal his libel loss in the High Court, who found a story that he assaulted ex-wife Amber Heard to be ‘substantially true.’ 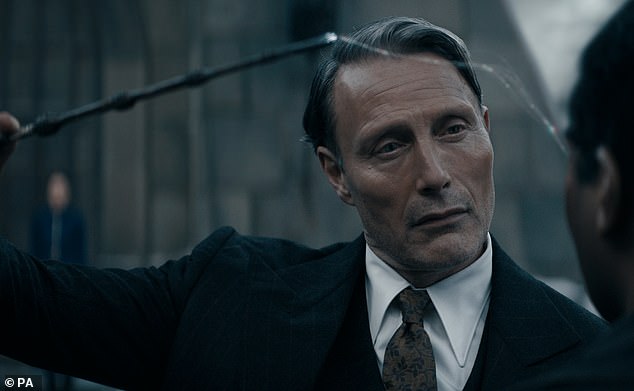 Reviews are in: Critics claimed that Mads Mikkelsen, 56, ‘should’ve been cast from the start’ in Fantastic Beasts 3  and it’s ‘easy to forget’ that Johnny Depp once played Gellert Grindelwald

Yet film critics have been impressed with Mads’ ability to adapt for the role, claiming that he ‘should’ve been cast from the start’.

They suggested Mads outshone Johnny, who first introduced audiences to the evil wizard in the 2016 film Fantastic Beasts and Where to Find Them, which was followed by the 2018 sequel The Crimes of Grindelwald.

In a review for Insider, critic Kirsten Acuna wrote: ‘Mikkelsen slips into the role of Grindelwald so naturally that it’s easy to forget Depp had ever played the role.’ 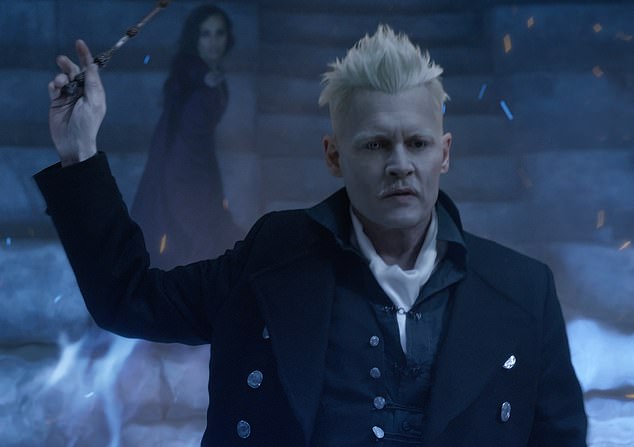 Replaced: Mads took on the villainous wizard Grindelwald after Johnny, 58, [pictured] was removed from the Warner Bros film one week into production due to a libel case

She continued: ‘With Depp, I couldn’t understand why anyone would want to follow a wizard who comically looked like another bizarre invention out of the actor’s menagerie of eccentric characters he’s played over the years.

‘In contrast, Mikkelsen plays Grindelwald with a suave, charming charisma that convinces you of why anyone would be seduced by this alluring, handsome wizard and be suckered into fighting a war for him.’ 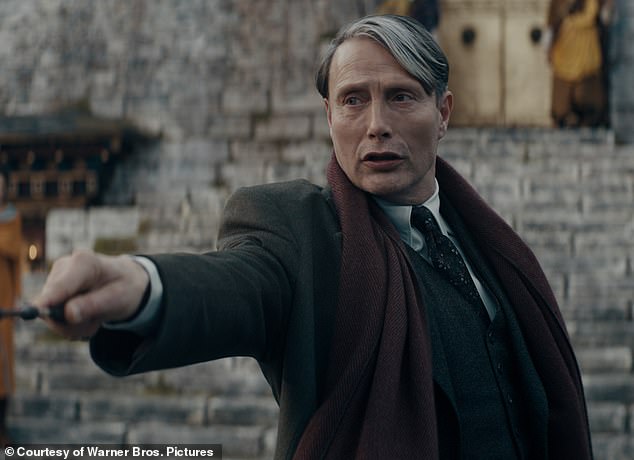 Mads said previously: ‘There has to be a bridge between what Johnny did and what I’m going to do. And at the same time, I also have to make it my own’

The Guardian’s Peter Bradshaw wrote in his review that Mikkelsen ‘gives a subtler and more insidious performance than Depp’s.’

He ‘should have been cast from the start’, wrote the Telegraph’s Robbie Cullen.

Twitter: Other Fans believed ‘the best part’ of the film was Mads and that he ‘absolutely killed it as Gringelwald

Fans also shared their views on the actor change, with some believing ‘the best part’ of the film was Mads and that he ‘absolutely killed it as Gringelwald.’

However, some did disagree and stayed loyal to the original actor by tweeting how much they ‘miss watching’ Johnny.

Mads previously told Entertainment Weekly that taking over from Johnny was ‘tricky’ because ‘there has to be a bridge between what Johnny did and what I’m going to do. And at the same time, I also have to make it my own.’

Speaking to Supanova Comic-con and Gaming, he said: ‘My journey was fast, swift, but I felt at home right away.’

Meanwhile, co-star Jude Law said the Hannibal actor was phenomenal in the ‘complicated scenario’ and brought ‘a natural sense of intellect, sophistication, swagger, attractiveness, and complexity,’ to the role.

Fantastic Beasts: The Secrets of Dumbledore was released to critical acclaim on April 8.

Fantastic Beasts 3: What did the critics think?

Brian Viner, The Daily Mail: ‘All this unfolds with energy, wit and dazzling special effects, though you’ll need to have seen the first two films to have more than a vague clue what’s going on. Even if you did, following the plot is less than straightforward’

Peter Bradshaw, The Guardian: ‘It’s good-natured entertainment, though there is still something weightless and formless about the narrative’

Andy Lea, The Mirror: ‘Thankfully, while still nowhere near as enchanting as a trip to Hogwarts, the third Fantastic Beasts film brings some movie magic back to Rowling’s Wizarding World’

Charlotte O’ Sullivan, The Evening Standard: ‘Secrets of Dumbledore shows an impressive willingness to mess with the HP formula (and formulas in general). It’s a work in progress and within a whisker of being fantastic.’

Kevin Maher, The Times: ‘Supporting players are tip-top, and even scenery-chewer Ezra Miller (as the deranged mini-villain Credence) has dialled it down nicely’

Peter Debruge, Variety: ‘Three-fifths of the way through this series, ugly, ungainly enchantment overload is clearly the agreed-upon aesthetic, as Rowling and Kloves again come up with a plot that’s considerably more complicated than it needs to be’

Robbie Collin, The Telegraph: ‘Doses of Potter nostalgia are methodically positioned along the route like bolts on a climbing wall, to give the otherwise bamboozled viewer something to cling to’

Siddhant Adlakha, IGN: ‘It looks drab and feels like it was made by people who want to leave its magical premise behind’

Lovia Gyarkye, The Hollywood Reporter: ‘This installment revolves around Dumbledore, a more interesting character than the series’ purported hero, Newt’

Stephanie Bunbury, Deadline: ‘ ‘Quite a few of these plot threads hang loose, making no sense. There was an entire chase sequence where I had no idea who was doing the chasing’

Unable to stop him alone, he entrusts magizoologist Newt Scamander, played by Eddie Redmayne, to lead an intrepid team of wizards and witches.

They soon encounter an array of old and new beasts as they clash with Grindelwald’s growing legion of followers.

At last, a movie to put magic back in the Potterverse! Fantastic Beasts: The Secrets Of Dumbledore, while overlong, is a welcome return to form, writes BRIAN VINER

Four years is a long time in fantasy. Since the last film in the Fantastic Beasts series, 2018’s The Crimes Of Grindelwald, Johnny Depp, who played the title character, has been accused of crimes of his own and ‘invited’ to step away.

Meanwhile, JK Rowling, who conceived the whole thing as a Harry Potter spin-off, has helped conjure up a tremendous barney over transgender rights.

Happily, at Monday night’s unveiling of the third Fantastic Beasts movie, no audible disgruntlement greeted Rowling’s name as it appeared on screen (as co-writer and producer).

I went with my 23-year-old niece Millie who whispered to me as the lights went down that she is ‘anti-JK Rowling’ and briefly explained why. Maybe it’s generational. On the whole, Monday’s audience was a lot closer to Millie’s age than mine, but even if you don’t think (as I do) that Rowling talks a whole heap of sense about gender, she is still a heck of a storyteller. 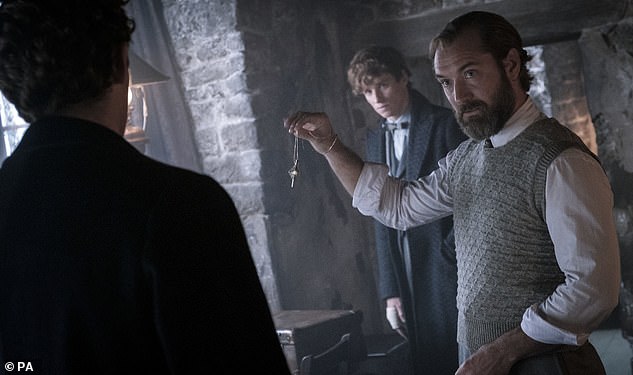 Eddie Redmayne as Newt Scamander and Jude Law as Albus Dumbledore, appearing in the film Fantastic Beasts: The Secrets Of Dumbleore

With the excellent Mads Mikkelsen replacing Depp as the dark wizard Gellert Grindelwald, playing him as less overtly evil but more insidiously sinister, this film confirms what was only hinted at last time, that Grindelwald and his nemesis, the benign Albus Dumbledore (Jude Law), were once lovers.

As for Dumbledore’s protege, ‘magizoologist’ Newt Scamander, Eddie Redmayne is once more a study in tousle-haired, lip-biting diffidence. As before, you will either want to mother him or murder him.

But he has grown on me as a reluctant action hero, and there is a priceless scene when in releasing his brother Theseus (Callum Turner) from a prison Newt out-manoeuvres a scorpion army by deploying ‘limbic mimicry’, distracting them from violent engagement by making them copy his dance moves. It is exquisitely done, pure cinematic joy, and worth the price of admission on its own.

But Newt has other problems. Grindelwald’s goons have rudely interrupted one of his beast-gathering expeditions, stealing a new-born, enchanted creature pronounced ‘chillin’, a cross between a fawn, a goat and an ancient mystic. Able to see into the soul, it has the power to determine the next head of the International Confederation of Wizards, a position Grindelwald craves.

Luckily, the dark wizard’s underlings pounced without knowing that a twin was born moments later. Grindelwald’s version, it seems, might not be the full chillin.

All this unfolds with energy, wit and dazzling special effects, though you’ll need to have seen the first two films to have more than a vague clue what’s going on. Even if you did, following the plot is less than straightforward.

But the director is again David Yates, whose credits also include four of the Harry Potter pictures, and who knows better than anyone how to bring Rowling’s universe to life. I loved his first film in the series, Fantastic Beasts And Where To Find Them (2016), but found The Crimes Of Grindelwald devoid of magic. This, while overlong, is a return to form.

The period has moved on from the Roaring Twenties into the Menacing Thirties, and by shifting the action to Berlin, where Grindelwald is a charismatic demagogue increasingly adored by the masses – ‘the world will hear our voice and it will be deafening,’ he cries – the parallels with Nazism are as unsubtle as a Nuremberg rally. Other loose story threads from the last film are deftly tied. One reveals the true identity of Credence Barebone (Ezra Miller).

And the principal two words in the title are not overlooked. Newt’s special friends are again his platypus-like ‘niffler’ and stick-shaped ‘bowtruckle’, and watching them I was reminded of a TV interview I once did with Rowling, when I told her that my then nine-year-old son had been distraught on realising he would never be a wizard.

Far from being charmed, she winced, and said she hated people telling her that. Well, I have news for her. He’s all grown up now, in fact married, but when he watches this he will wish he had a bowtruckle to call his own. Maybe everyone will.

Fantastic Beasts: The Secrets of Dumbledore is released on Friday, April 15.