MAGGIE PAGANO: China slow-down will have a knock-on effect on growth

It’s Groundhog Day in China. A surge in Covid cases has seen authorities close schools and businesses in Shanghai, lock down the 17m residents living in the southern powerhouse of Shenzhen as well as several northeastern cities in Jilin.

Everyone in Shenzhen – one of the world’s most important exporting centres – has to undergo three Covid tests a week in what the authorities describe as the worst outbreak since early 2020.

All manufacturing and commercial activities in the province have been ordered to close for the next seven days. 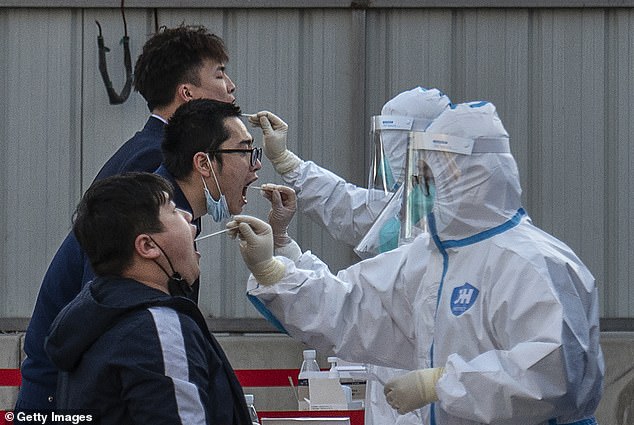 Lockdown restrictions: Health workers test residents in the southern Chinese city of Shenzhen in what authorities describe as the worst Covid outbreak since early 2020

It was the closure of Yantian port – the third biggest in the world – in the first outbreak which caused such disruption to global supply chains with some analysts estimating that trade going to and through the port collapsed by three quarters.

As the last two years have shown, it only takes a few bottlenecks in shipping routes to create a devastating whiplash effect on trading around the world, one of the reasons that inflation is soaring.

Apple’s supplier, Foxconn, and dozens of Taiwanese manufacturers of circuit boards and other hi-tech products are among those to have halted production.

South of Shenzhen, Hong Kong is also in a critical situation with one of the highest levels of Covid cases and deaths in the world.

As the new lockdowns were announced over the weekend, fears that China’s GDP could be badly hit by a loss of output sent the Hang Seng Tech Index down by more than 7 per cent and the wider Hang Seng index by nearly 5 per cent.

Since July 2020, company valuations on the index have lost more than $2 trillion.

China’s efforts to contain these flare-ups, with their zero-Covid policy of lockdowns and mass testing, is being sorely tested.

But if its leaders do continue on this path, the country’s target growth rate of 5.5 per cent this year looks increasingly unlikely.

China’s slow-down will in turn have a knock-on effect on world growth, which has already been hit by the devastating impact of Russia’s war in Ukraine on energy and other commodity prices, quite apart from the horrifying humanitarian crisis.

The ruble is worth about a penny. Moscow’s stock exchange has been shut for two weeks.

Russia’s credit rating is near junk status while every foreign company worth its salt has either pulled out of the country or halted production.

Without doubt, the economic noose thrown by the West around President Putin’s neck is having the most crippling effect on Russia’s economy, the equivalent of being sent to Siberia.

Western sanctions are biting deep, particularly for the middle classes. The impact is so bad that the Institute of International Finance warns that Russia’s output will fall by about a third this year, a bigger collapse than during the 2008 financial crash.

Yet the sanctions noose has had little or no impact on Putin’s desire to end the war. Indeed the West’s unprecedented actions make him even more belligerent, determined to battle it out alone with the help – or so he had hoped – of China and India.

That’s why sanctions so often appear a crude tool when punishing an aggressor’s behaviour. But where sanctions come into their own is when warring parties eventually sit together at the negotiating table.

As seen in the jockeying between the US and Iran, that’s when the promise of easing, or indeed tightening, sanctions can be used as a bargaining chip. The West’s game of poker with Putin has only just begun.

When historians look back on Covid times, they will name March 14 as the marker between Pre-C and Post-C.

Out of the cost-of-living basket go men’s suits and women’s upholstered bras, and in come blazers and sports bras.

Suits and bras are just two of the 700 everyday items which the Office for National Statistics has tossed out of its basket used to measure living costs.

Instead of the suit – which has been a staple of the inflation basket since 1947 – comes the blazer jacket. How sad. The traditional suit will be much mourned, and hopefully its absence only temporary.

Other new goods in the basket – along with chickpeas and lentils – are the ubiquitous anti-bacterial wipes which have clearly made many a fortune over the last few years. With any luck, they will soon be out of fashion too.