It is not the win that Vin Murria wanted but the tech tycoon can’t complain. On Tuesday she launched a hostile bid for M&C Saatchi – and ended the week around £40m richer following a rival bid from Next Fifteen.

Together with her investment vehicle, Advanced AdvT, Murria owns 22 per cent of M&C Saatchi shares so Next Fifteen’s £310m offer is a healthy reward.

As the advertising agency’s directors have given the thumbs-up to the takeover offer, it’s unlikely that Murria will raise her £245m offer. While they have been implacably opposed to her bid – and threatened to quit – they should perhaps be thankful for her persistence. 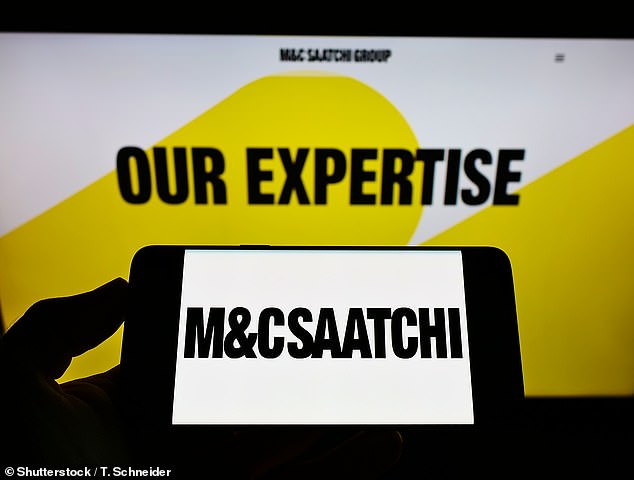 Boost: M&C Saatchi shares jumped by more than a third to 220p on the news

After all, Murria’s interest, if not faith in the agency’s potential, has made them, and all investors, a whole lot richer by flushing out a rival bidder. Investors think so too, with M&C Saatchi shares jumping by more than a third to 220p on the news of the share and cash offer valuing them at 247.2p. Her offer was at 207p.

What is astonishing is that news of Next Fifteen’s interest had not leaked before yesterday’s bid as the bosses of the two groups have been in deep talks for more than two months. But Next’s US-based Tim Dyson, has been eyeing the agency for years. He decided to wait until its business improved after the messy exit of the founders, while his own grew stronger.

Putting the two agencies together now will give global scale, particularly in the US and UK where, surprisingly, M&C Saatchi is the weaker partner.

In contrast, the agency is strong in Asia, Africa and Europe, with a roster of blue-chip clients. The deal looks a good fit.

Next Fifteen, which owns a collection of businesses such as the Savanta market research firm and Engine, a ‘digital transformation’ business, is strong in the space known as data-driven marketing.

If that sounds horribly techy, it’s because Dyson comes from a tech background, having worked for Microsoft, and includes Google, Amazon and Facebook among his clients. The logic is that by bringing together new data-driven marketing with the sexier, creative work of M&C Saatchi, their offer for a one-size-fits-all approach will prove irresistible to global clients. Who knows?

But Dyson hasn’t done badly so far, having built an AIM-listed business worth £1.2billion and growing. M&C Saatchi investors, who will not be offered all cash for their shares, should enjoy the ride.

Sports bras, Pelotons and hand sanitisers were all the rage only a year ago in the depths of the pandemic.

But old habits die hard: life is coming back to normal with higher sales of booze, sweets and smokes behind the surprise boost in April’s retail figures.

The Office for National Statistics figures were better than forecast after March’s sharp fall, but are still heading down.

Shopping for big ticket items like furniture and electrical goods is falling like a stone as consumers remain fearful of the future Research from GfK suggests households are gloomier than at any time since the 2008 crash, Brexit or indeed during the Covid shutdown.

It is set to get worse: Bank of England chief economist Huw Pill delivered yet another bitter pill, warning that inflation is heading into double digits, and much higher interest rates are on the way. Coupled with higher taxes and energy prices, consumers can be forgiven for turning to the booze.

We are not alone. This shift in consumption and fears of a recession touch every corner of the globe. The MSCI world equity index of 50 countries is down for the seventh consecutive week.

In the US, shares in big retailers such as Target and Walmart fell to levels not seen since the 1987 crash. After weeks of food riots and petrol queues, Sri Lanka has defaulted on its debts.

While China’s interest rate cut helped lift markets, the move shows just how worried the authorities are about future growth.

Another businesswoman to have increased her wealth recently is Denise Coates, founder and chief executive of Bet 365, the gambling company.

According to the latest Sunday Times rich list, she is Britain’s fifth-richest woman with £8.6billion, a rise of £189m on last year.

She is the only one on the list who made the wealth herself. The others, such as Selfridges chair Alannah Weston and film star Salma Hayek, either inherited their fortunes or married them.