MAGGIE PAGANO: The Chancellor has left an open goal for his critics

Sterling was in calmer waters yesterday after Monday’s feeding frenzy, but the storm is far from over.

Huw Pill, the Bank of England’s chief economist, has indicated interest rates will go up, though not before November, when the next meeting of the Monetary Policy Committee is in the diary.

A lot is scheduled to happen that month. 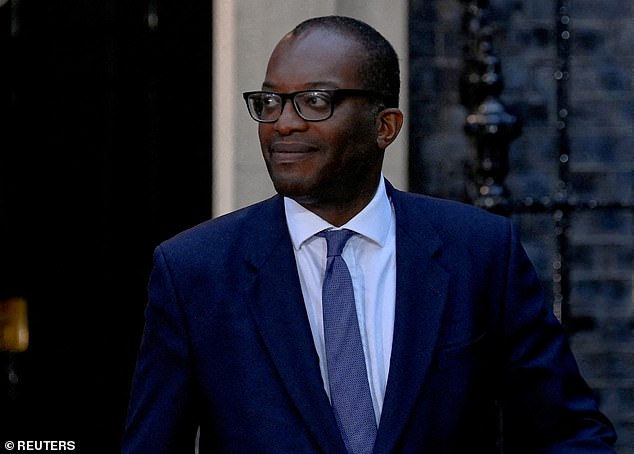 Chancellor Kwasi Kwarteng and Bank of England governor Andrew Bailey need to move quickly to try to convince markets, voters and critics that the situation is under control

Chancellor Kwasi Kwarteng says he will set out his medium-term fiscal plan with new rules for balancing the books over time on the 23rd of November.

And for those decrying the lack of independent analysis last week from the Office for Budget Responsibility, he is promising a full forecast from the OBR.

Anticipation mounts, but the idea that the world will wait patiently until near the end of November is for the birds. It leaves a long and dangerous vacuum.

Kwarteng and Bank of England governor Andrew Bailey need to move quickly to try to convince markets, voters and critics in the Tory party that the situation is under control. The Chancellor’s mini-Budget was by no means the wild and reckless exercise being portrayed by some.

For one thing, the tax cuts are offset by the little-noticed effects of fiscal drag, which will pull in a lot of extra cash.

Kwarteng left in place a four-year freeze on thresholds and allowances that, thanks to inflation, will haul in around £45billion of extra revenues.

Most of the ‘cuts’ are halting ex-chancellor Rishi Sunak’s increases to national insurance and corporation tax.

The pro-growth measures, including investment zones, reforming pension fund rules and incentives for firms to invest, are eminently sensible.

Productivity and real wage growth in this country have been stagnant since the financial crisis. Business investment lags the OECD average. Kwarteng is making a bid to do something about it.

The pile-on against him and Liz Truss has been disproportionate and sometimes shockingly vitriolic. Low tax and high growth are two cardinal Tory virtues.

A third is fiscal responsibility. Unfortunately, by failing to spell out plans to balance the books in the medium term, Kwarteng left an open goal for his critics.

One couple who will not need to worry too much about the purse strings are Dave and Debbie Hardy, who run a Midlands building firm. The pair are the biggest shareholders in North Sea energy firm Serica.

It’s unusual to see individuals, rather than big institutions, at the top of a share register. Whatever prompted their investment, it has been a highly astute move.

Shares in Serica are up 42 per cent this year and 1170pc in five years, closing yesterday at 355p. That spells an enormous paper gain for the Hardys, who bought in for as little as 3p a share several years ago. Their holding is now worth around £100million.

Serica is cashing in on the boom in North Sea oil as the UK and other countries seek to become less dependent on Russian energy.

More than 85 per cent of its production is gas, providing an alternative source of domestic supply – around 5 per cent of the total.

The shares suffered after Sunak imposed a windfall tax, but the company reckons that it can use investment allowances to reduce liabilities.

Profits have mushroomed to just under £200million in the first half of this year, from £2.2million for the same period of 2021.

An 8p-a-share dividend announced yesterday will bring them another £2.3m payout in November. Dave and Debbie must have a good claim to be Britain’s savviest private investors.

As I warned earlier this week, the slide in sterling has made British companies sitting duck targets for US predators.

Although the turmoil on markets has had a chilling effect, the weakness of the pound is still a powerful pull for bargain hunters.

Biffa, the waste management firm, is the latest to succumb to an offer from US buyout barons Energy Capital Partners (ECP), which has been reduced from an initial proposal early in the summer.

Lenders are less willing to put up large sums to fund takeovers in the current tinderbox climate, so the deal has been scaled back in order to push it through.

The upshot is that ECP may well have bagged itself even more of a bargain.

Waste management is not a strategic industry on a par with defence, obviously.

But Biffa is a strong brand and a UK market leader in a sector that, given the interest in recycling and sustainability, should have growth potential.

Another one bites the dust.