MAGGIE PAGANO: The red warning lights of recession are flashing

Red warning lights that the world’s major economies are heading for a sharp downturn – if not recession – are flashing from all points of the globe.

In a speech in Brussels, Andrew Bailey, the Bank of England’s governor, warned that the challenges facing the world economy – particularly in the commodity markets – are bigger than after the global financial crisis.

What’s more, the hit to living standards from surging energy prices following Russia’s invasion of Ukraine will be worse than at any time in the 1970s. 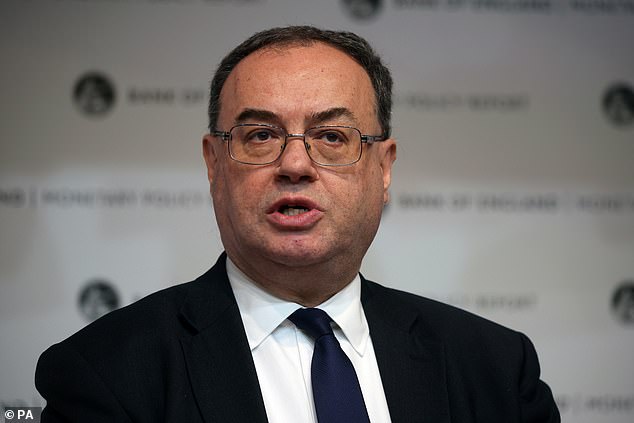 Balancing act: Bank of England governor, Andrew Bailey (pictured) warned that the challenges facing the world economy are bigger than after the global financial crisis

Bailey added that soaring energy prices will be an ‘historic shock’ to real incomes, adding further pressure on consumers already facing inflation at a 30-year high.

These were punchy words from the governor, who went on to warn that there will be worse to come on the inflation front, with the UK facing ‘a very large shock to aggregate income and spending’.

With the cost of living rising, Bailey also predicted that lower spending would – in the long run –help control inflation. Or so he hopes.

What does Bailey’s horror show suggest for future domestic policy?

Will the Bank of England – which until now has taken a softly-softly approach to raising rates – continue with hikes in an attempt to control inflation?

Over the past few months, the Bank has raised rates three times.

Whether interest rates are hiked again in May to 1 per cent – as forecast by most analysts – now looks more uncertain.

Having been accused of misleading the markets before, Bailey was more careful about where they are heading next, saying the Bank has been ‘cautious on forward guidance language because things are so uncertain’. He also concedes that they are not a silver bullet for taming inflation.

That was the right – and only – response as so much now depends on whether peace talks being held between Russia and Ukraine in Turkey do or do not lead to some form of compromise.

If not resolved soon, then expect more supply shocks and shortages of basic commodities such as wheat and barley.

In the US, Treasury futures are also on red alert. There are two market figures which have, in the past, shown highly accurate predictive powers indicating future recessions.

One is the yield on three-month Treasury bills and ten-year notes, which has been widening, but last week it hit its sharpest level in more than five years.

The other is the US two-year-to-ten-year curve, which is close to inverting where the longer interest rates yield less than the shorter. In other words, investors are being paid more for their money now than in the future.

This is important because a flattening curve indicates investors have lost confidence in the future growth of the economy. Hardly a good sign.

Looking east, the Covid situation in China is getting worse. Shanghai has been put into an extreme lockdown, cutting China’s leading financial centre in half and confining millions to their homes. Links to the rest of the country have been cut.

It rather looks as though the next few weeks are going to be even more of a roller-coaster ride and shows why global growth forecasts are being slashed to just over 3 per cent this year.

Central bankers must hang on to their seat belts and ride out the volatility before rushing into more rate hikes. The danger is that raising rates too far would make matters far worse and tip us into recession.

Rolls-Royce falls down to earth

Rolls-Royce has fallen back to earth. After last week’s fevered bid speculation sent the shares shooting up by nearly 20 per cent, they are back down to 98.38p.

Investors have taken the view the bid talk was all hot air, and that the aircraft engine-maker is not about to be courted.

They will also know that Rolls-Royce – which has had a torrid time over the past few years – is going to suffer even more if growth contracts because its commercial business depends on long-haul flights and what’s called ‘power by hour’, which measures the use of its engines.

More pertinently, investors will have clocked that the Government would put an immediate block to a takeover if it were from an overseas buyer.

This is not only because of Rolls’ golden share, but because of its specialist defence business and its work developing small modular reactors, the great new hope for producing cheaper, scalable and more efficient nuclear energy.

It’s also a technology with multiple applications, from industrial electricity production to hydrogen and synthetic fuel manufacturing and could create up to 40,000 jobs. On that basis, the shares are undervalued.

Share
Facebook
Twitter
Pinterest
WhatsApp
Previous articleRegé-Jean Page passes the Bond audition in a dapper tuxedo as 007 hopeful attends Oscars party
Next articleSally had a breast reduction free on the NHS..so why did daughter Ellie have to pay £6,000 for hers?
RELATED ARTICLES
Business