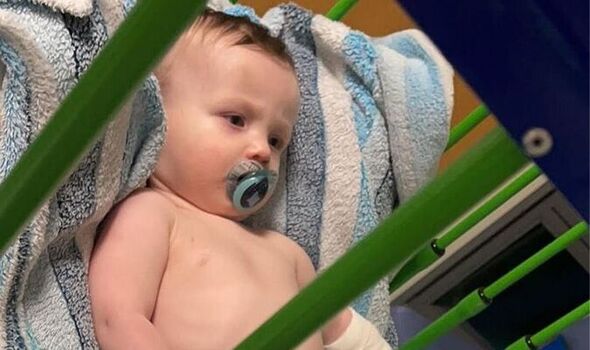 Blake Nilssen was horrifically burned in the incident (Image: Supplied)

A manager at a nursery where a 10-month-old baby was left with second-degree burns from bleach and boiling water has been allowed to continue working in the care industry.

According to reports, little Blake Nilssen toppled over an unattended cleaning bucket while trying to stand up at the Little Dreams Nursery in November 2021.

The child was also denied treatment for an hour because staff waited for parents to collect him instead of calling for an ambulance – which a watchdog today said caused Blake “a prolonged period of emotional and physical harm”, Daily Record reports.

The child’s suffering worsened after staff at the Aberdeen nursery covered him in paper towels which, when removed, ripped off blisters which had started to form.

Investigators from the Scottish Social Services Council (SSSC) found nursery manager Nicola Park’s fitness to practise had been impaired due to her not immediately calling for an ambulance.

In its report, investigators said: “The child was experiencing significant distress as a result of being burned. Having been made aware of the circumstances of the accident, you should have known the child would require urgent medical treatment and should either have directed a member of staff to call an ambulance or called one yourself so the child’s injuries could be treated by medical professionals as soon as possible.

“Advice could have been sought from emergency services about how best to support the child while waiting for an ambulance to arrive.

“Your failure to call an ambulance would likely have contributed to the child suffering a prolonged period of emotional and physical harm, which could have been prevented if an ambulance had been called immediately.

“You have 12 years of experience working in a managerial role in a childcare setting, making the failure to call an ambulance all the more concerning.”

Ms Park told the SSSC panel that “shock took over her” as she had not been involved in an incident that serious before, and the watchdog accepted a child suffering burns from boiling water and bleach “was not a common occurrence within a nursery setting”.

However, they added: “As a manager, it is expected that you would be able to make decisions in the best interests of the children in your care when under pressure and in potentially stressful situations, which you have failed to do in this instance.”

The SSSC said the nursery’s management and staff had since updated its policies and procedures and risk assessments, and carried out staff training in case of another emergency.

Blake in bandages while in hospital (Image: Supplied)

Ms Park told the SSSC it was “her intention to learn from this incident and improve her practice”.

Investigators said her behaviour had fallen below the standards expected of a manager. They said: “Were similar behaviour to be repeated in the future, other vulnerable children could be placed at risk of significant harm. You have taken steps to improve your practice and you fully accept your behaviour was not as it should have been on the day of the incident.”

A 36-month warning was placed on Ms Park’s registration from November 30. According to the Little Dreams Nursery website, she is still the manager, having held the position since January 2019.

Blake’s mum Ellie Johnson previously called for the nursery to be closed. She said: “Blake faces being scarred for life and now we have a constant fear of knowing who to trust to take care of our son in the future.

“Little Dreams Nursery should be closed. This is utterly indefensible.”

Ellie, who runs her own beauty business, dropped Blake off at 9.30am but at 3.45pm was told to collect her son as he “managed to tip a bucket of water on himself”.

The mum from Aberdeen said: “They said the water had a bit of bleach in it but that was it. There was no urgency in their voice and they didn’t say the water was boiling.”

Ellie and partner Daryl Nilssen, an offshore worker, only realised things were serious on arrival at the nursery. The mum continued: “We opened the door and heard the most horrific screaming. It was chilling. Then we realised it came from our little boy. There’s no words to describe the fear we felt at that moment.”

The parents saw Blake in a room separate from the other children – he was stripped to his nappy and vest with his limbs covered in cling film and paper towels. The worried mum added: “He was screaming, his skin was red all over and there was an overwhelming smell of bleach with liquid running down his legs and arms from burst blisters. I screamed at the staff, grabbed Blake and drove to A&E. Blake screamed so hard he lost consciousness a few times on the way, literally passing out from the pain.”

Ellie described the horror incident as “blatant negligence” with the Care Inspectorate previously giving Little Dreams a “weak” rating. The most recent report said the nursery had successfully met all eight requirements made at the previous visit.

Little Dreams was approached for comment about the SSSC findings. A spokesperson previously said: “This was a very serious incident which was clearly deeply distressing for the child involved and the family.

“We take the safety of all the children in our care extremely seriously and whilst this was an isolated incident, we have fully investigated the causes.

“However, this appeal process does not detract from the focus we have at the nursery to ensure we are operating safely.”