Mandy Moore was spotted treating herself to a relaxing day at a Beverly Hills salon on Sunday.

The actress, 38, is pregnant with her second child with husband and Dawes singer, Taylor Goldsmith, whom she married in 2018.

The talented singer recently canceled the rest of her U.S. tour dates last month due to the long hours and travel ultimately ‘taking a toll’ on her health and pregnancy. 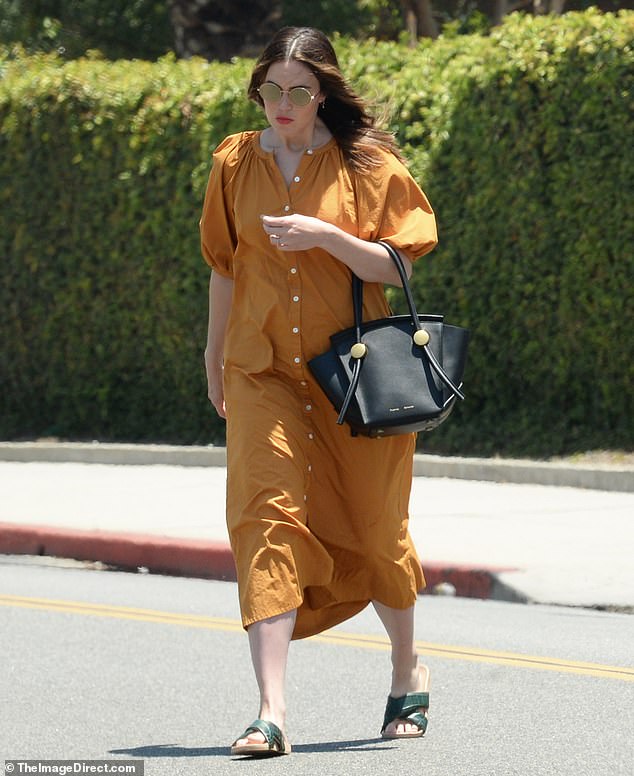 Relaxing Sunday: Mandy Moore, 38, pampered herself at a salon in Beverly Hills after canceling her tour dates due to her second pregnancy

The This Is Us actress kept her look casual and comfortable over the weekend, donning a long, orange sundress.

The dress had small, white buttons on the front and short, puffed sleeves, adding a stylish touch to the ensemble.

Mandy added a pair of black, slip on shoes to make walking around simple and easy under the afternoon sun. 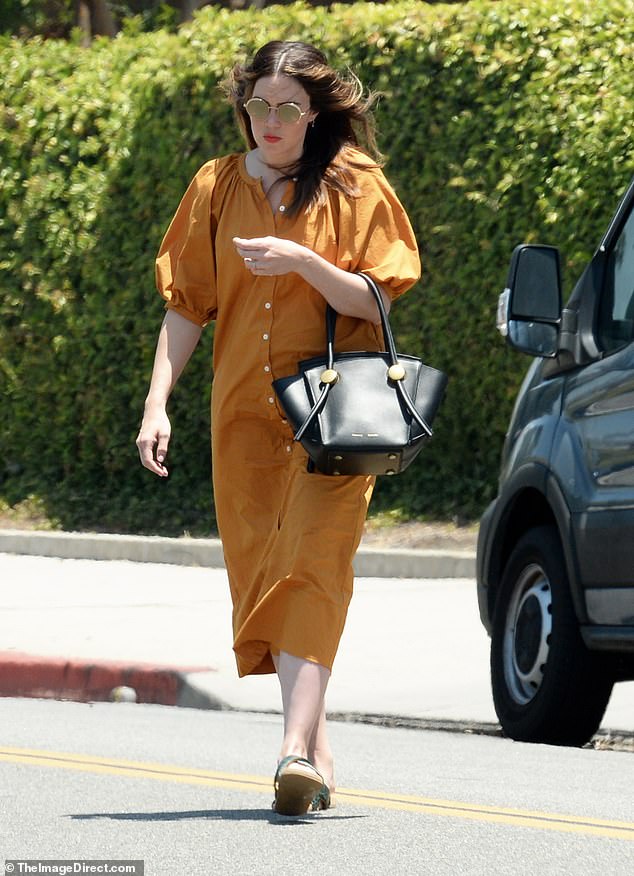 Beautiful: The Tangled star kept her look simple and chic for a quick afternoon outing in Beverly Hills

The mom of one kept her straight her down and her long locks fell down past her shoulders.

Mandy donned a pair of round, reflective sunglasses that made the outfit pop. The star opted to not wear any excessive jewelry with the dress.

She carried a large, black bag in the crook of her elbow as she strolled in the hot weather. 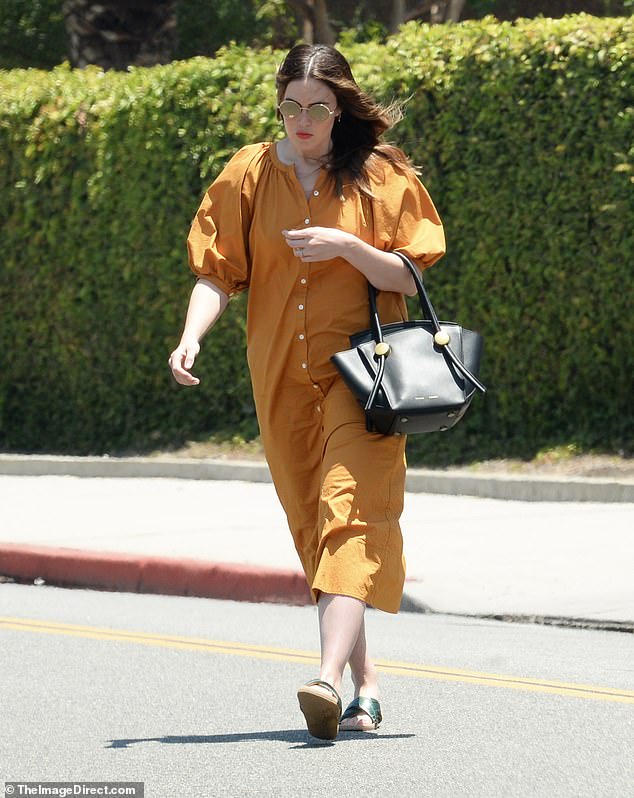 Taking time to rest: The singer canceled her upcoming tours with the busy schedule becoming too ‘challenging’ for Mandy

In a post on her Instagram that she uploaded last month in June, Mandy officially announced that all her upcoming tour dates would be canceled.

The star was promoting her latest album on the star’s In Real Life tour, which was originally set to go on through July.

However, the A Walk To Remember actress was pregnant with her second child, and was having a difficult time keeping up with the constant travel and being on-the-go with little rest. 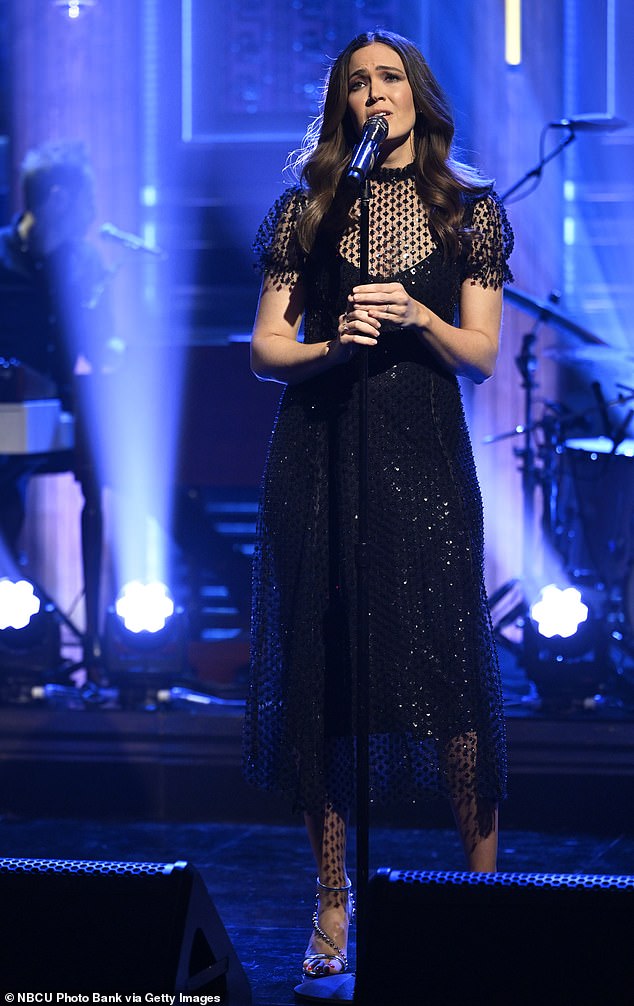 Passion: Mandy released her latest album, In Real Life, in May of this year, and the star is pictured performing on The Tonight Show Starring Jimmy Fallon to promote her album 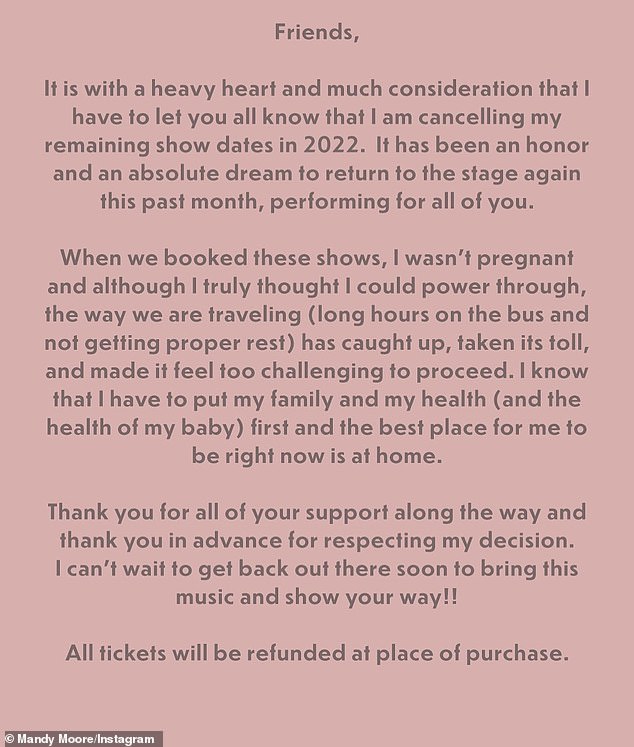 ‘It has been an honor’: The singer and actress released a statement to her fans on Instagram about the cancellation of her tour

‘It is with heavy heart and much consideration that I have to let you all know that I am cancelling my remaining show dates in 2022,’ she wrote out.

Mandy explained that her health and her baby needed to be top priority. ‘I know that I have to put m family and my health (and the health of my baby) first and the best place for me to be right now is at home.’

During her first pregnancy with her son, August, the actress had a rather difficult first trimester and was often very sick, according to Us Weekly. 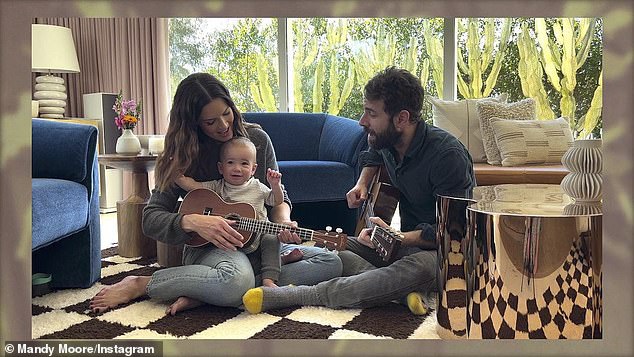 Happy family: Mandy is pictured with her husband, Taylor Goldsmith, and their son, August 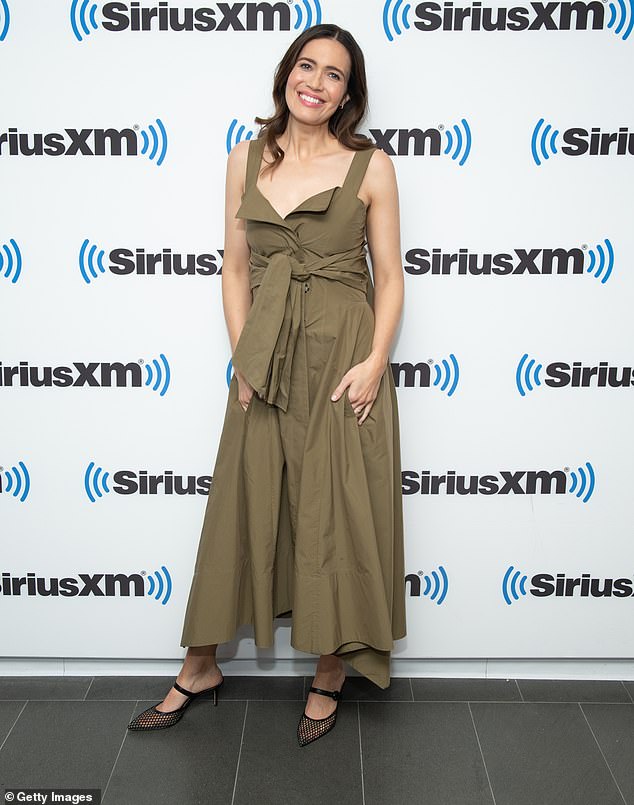 Thrilled: Despite having a hard time during her first pregnancy, the actress was more than happy to be adding another addition to her family

The publication also reported that during an interview on The Jess Cagle Show on Sirius XM, Mandy opened up about her first pregnancy.

‘I was home, so, I didn’t have to miss out on work. I don’t know how women do it. I literally woke up and was sick all day long,’ she explained.

‘I couldn’t eat. I lost a bunch of weight. I just stayed in bed all day,’ the actress added.

The star has been experiencing similar symptoms during her current pregnancy, forcing the singer to cancel and refund tickets to her U.S. tour.

However, that hasn’t stopped Mandy from showing her excitement to welcome another little one to her growing family. 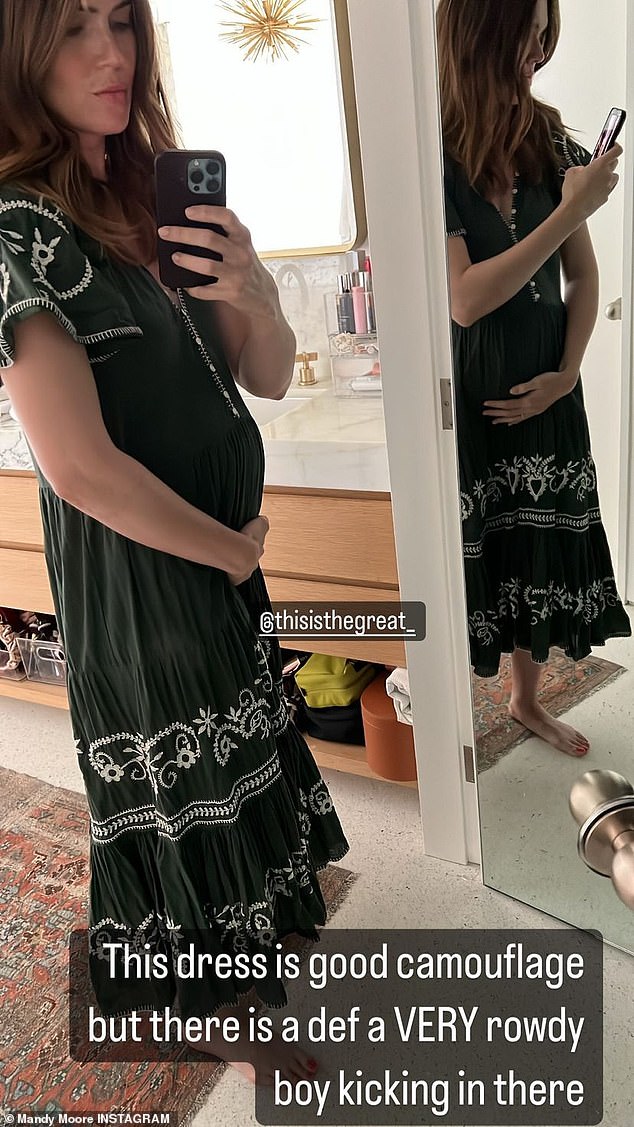 Very excited: The This Is Us star showed off her baby bump to her fans and followers on Instagram 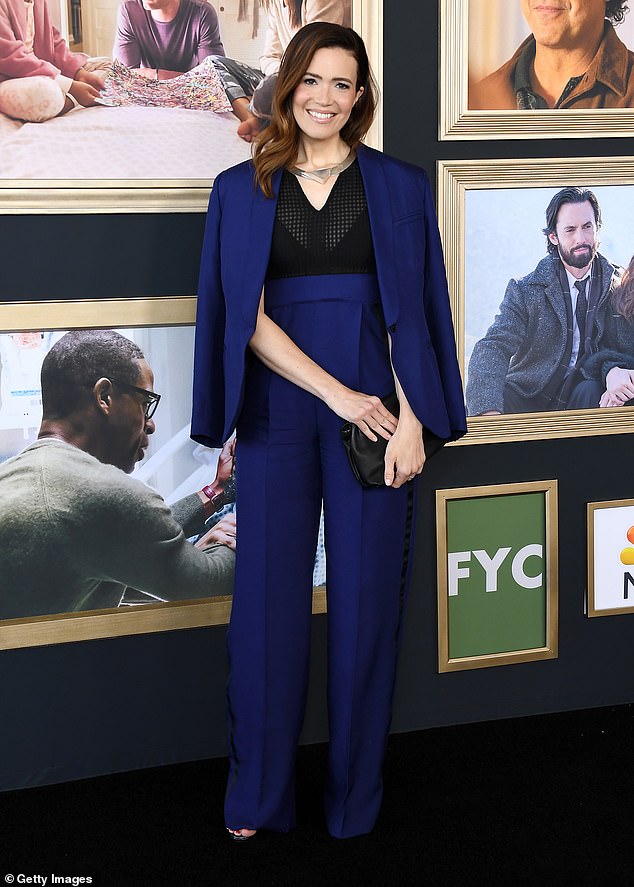 Big career milestone: Mandy played the role of Rebecca in the hit series, This Is Us, which recently aired its last season