Margot Robbie turned heads in a stunning gown as she stepped out in New York City to attend the special premiere of her latest film called, Amsterdam, earlier on Sunday.

The Wolf Of Wall Street actress, 32, opted for a sheer, lace dress as she posed for photos on the red carpet to celebrate the screening of the mystery comedy.

The upcoming period piece is set in the 1930s, and stars other talented actors such as Christian Bale, Taylor Swift, Anya Taylor-Joy, and John David Washington. 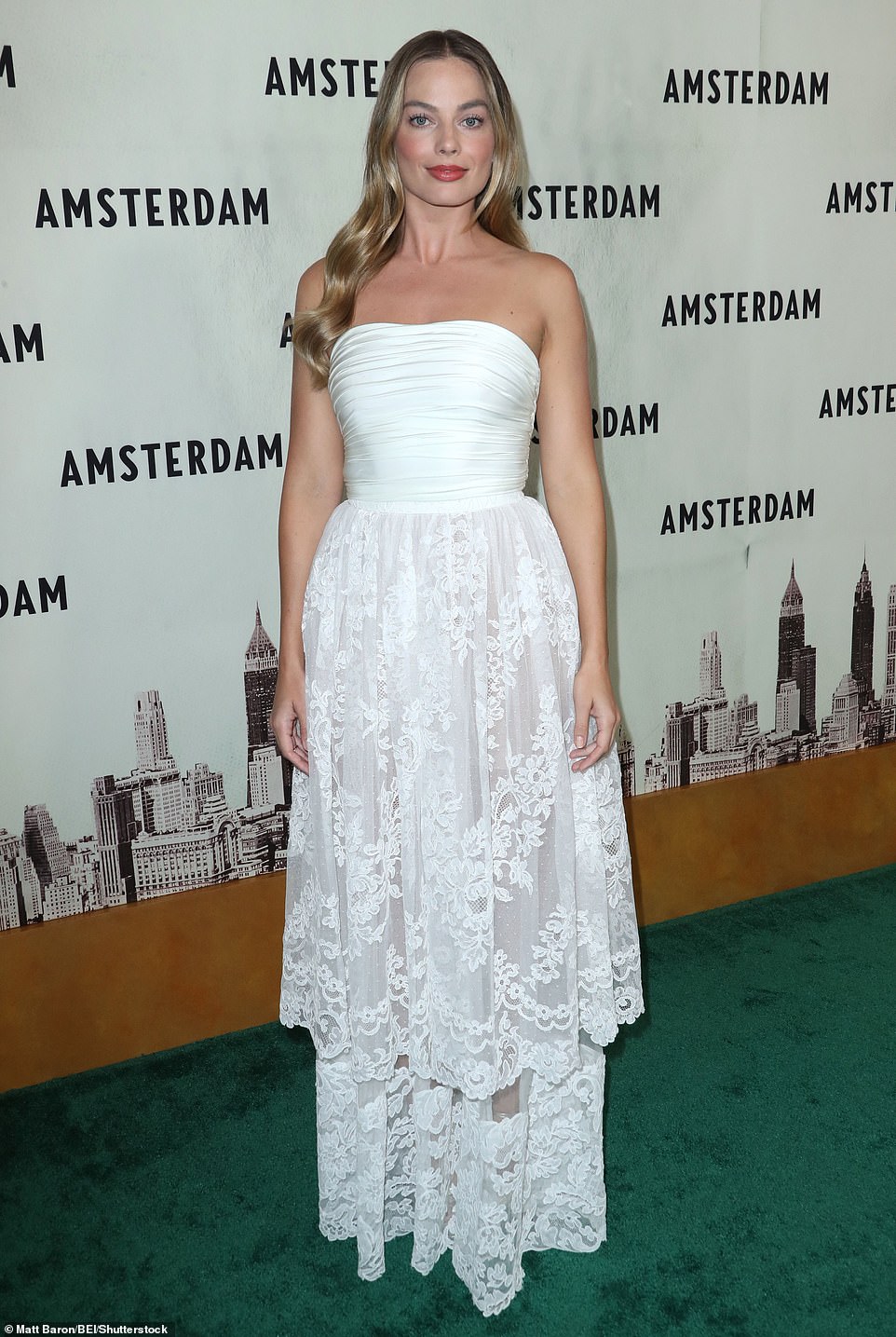 Stunning: Margot Robbie, 32, turned heads in an eye-catching lace, white gown when she attended the premiere of her newest film, Amsterdam, in NYC earlier on Sunday

The award-winning star stunned in a glamorous ensemble as she made a show-stopping arrival at the premiere.

The beauty wore a long, layered white dress that was made of a sheer, lace fabric. The top half of the gown was comprised of a thicker, ruched material of the same color.

For an additional pop of color, Margot chose to slip into a pair of gold, open-toed platform heels.

The talented star was all smiles when she was greeted by cheering fans and paparazzi as she paused for a brief photo session at the anticipated premiere.

Beautiful: The talented beauty donned a sheer, lace gown to attend the star-studded premiere in the big apple on Sunday 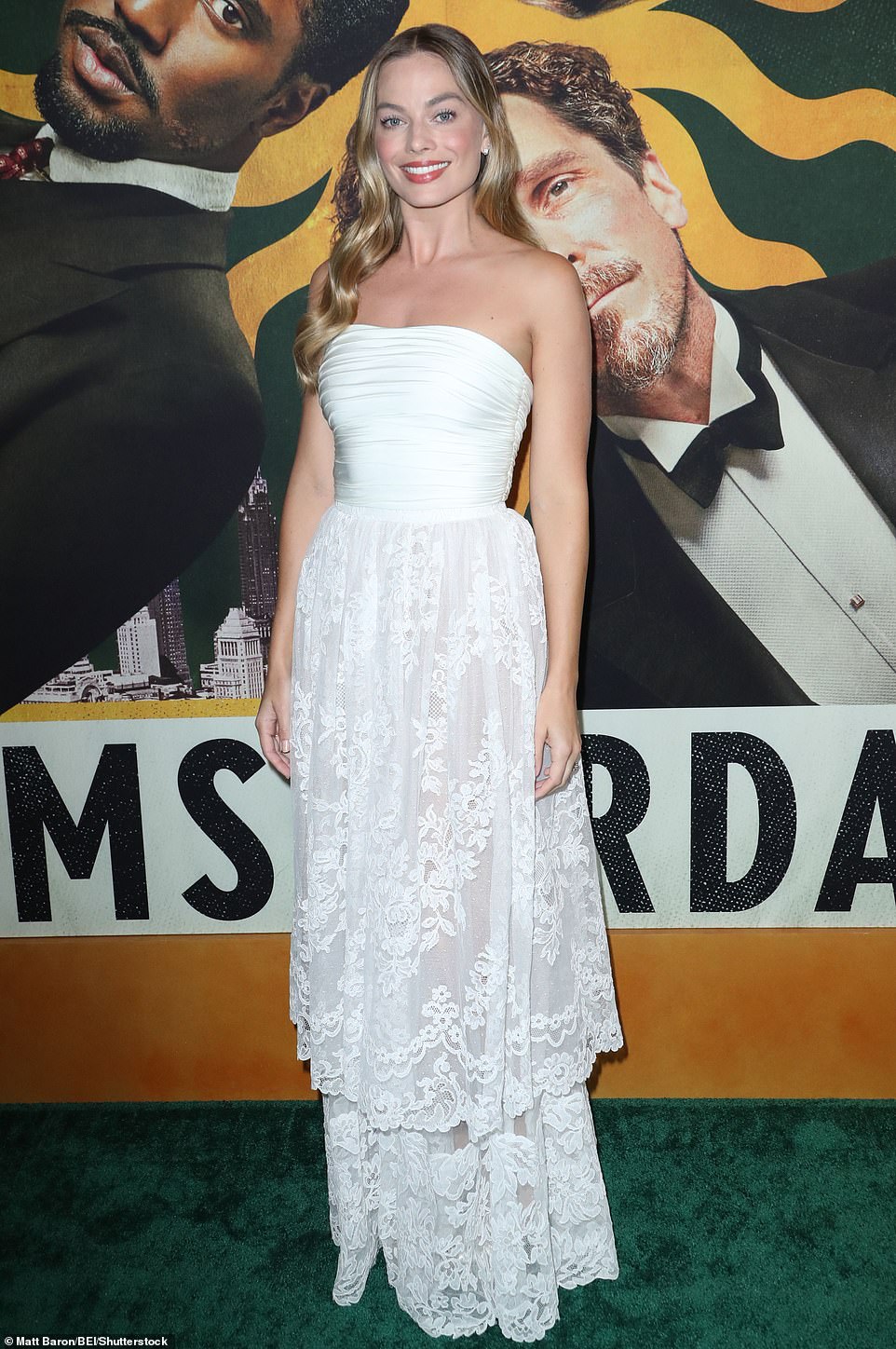 Big smile: The actress flashed a big smile when she arrived at the premiere to celebrate the screening of Amsterdam in NYC

The Barbie actress accessorized her look with a pair of silver earrings, but opted to not add any other pieces of jewelry to keep the gown the main focal point.

Her blonde locks were parted in the middle, allowing her hair to fall down past her shoulders in elegant curls.

The star’s makeup was classically done, comprising of a light blush and nude-colored, glossy lipstick. 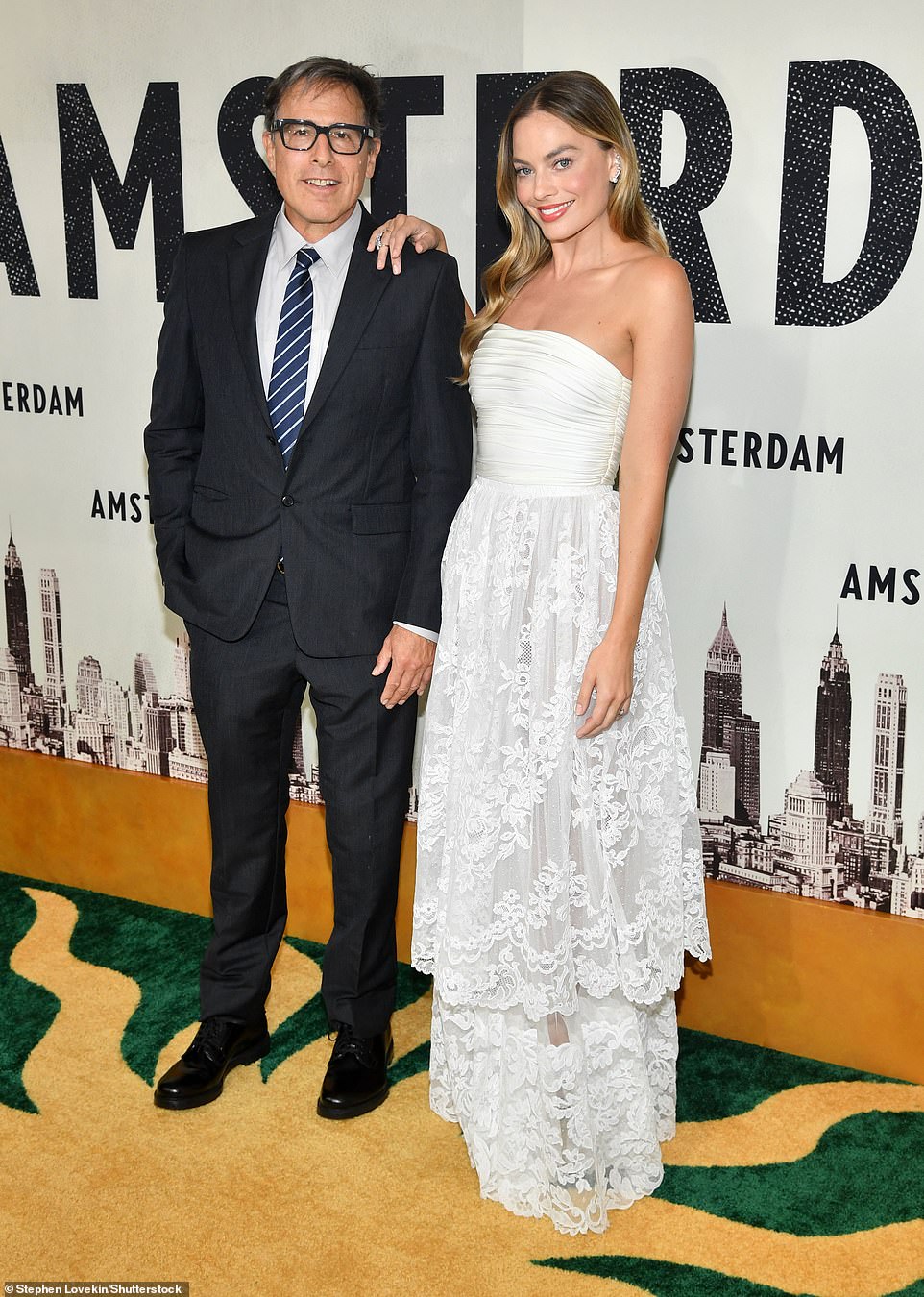 Special evening: Margot was pictured posing for a few photos next to the director, David O. Russell at the screening

Elegant: Margot exuded class and elegance in a layered, lace gown at the Amsterdam premiere 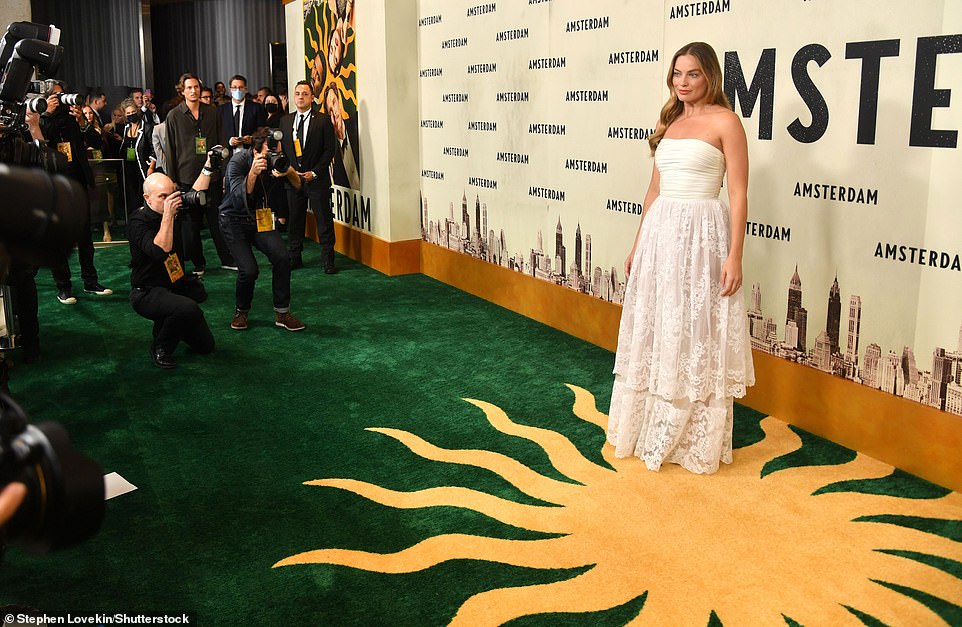 Big star: The Suicide Squad actress was seen stopping for a photo session when she arrived at the event on Sunday

Margot’s newest film, Amsterdam, is a historical comedy set in the 1930s, and directed by the talented David O. Russell.

The filmmaker is known for directing other successful movies such as American Hustle (2013), Silver Linings Playbook (2012), and The Fighter (2010).

The premise of the film follows, ‘three friends who witness a murder, become suspects themselves, and uncover one of the most outrageous plots in American history,’ according to IMDB.

Exciting project: Alongside Margot Robbie, Christian Bale and John David Washington play a trio of friends who find themselves entangled in a mystery 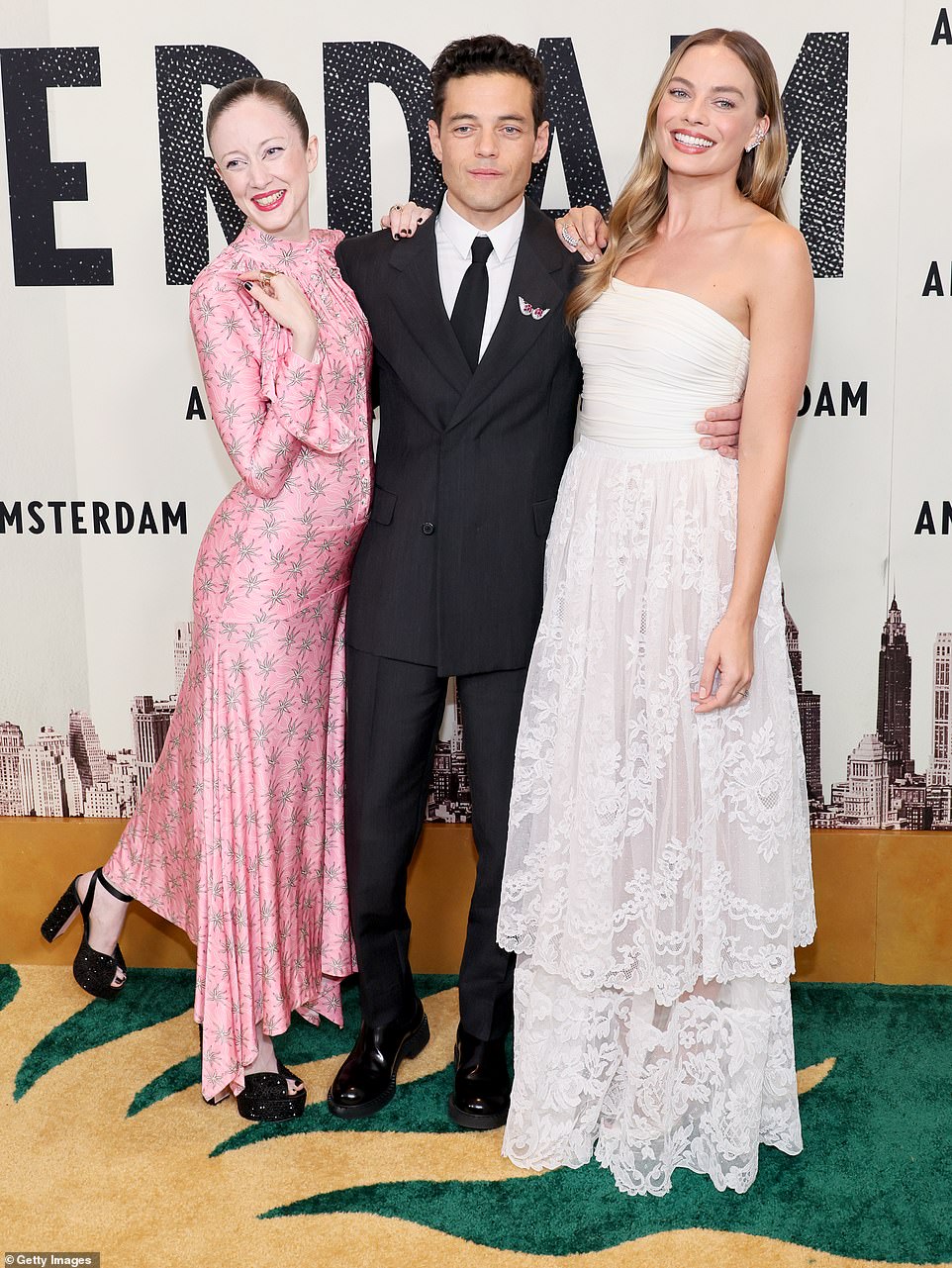 Great plot: During an interview with Deadline, the director expressed the film, ‘goes deep, about love and friendship. It goes deep into murder and events’ 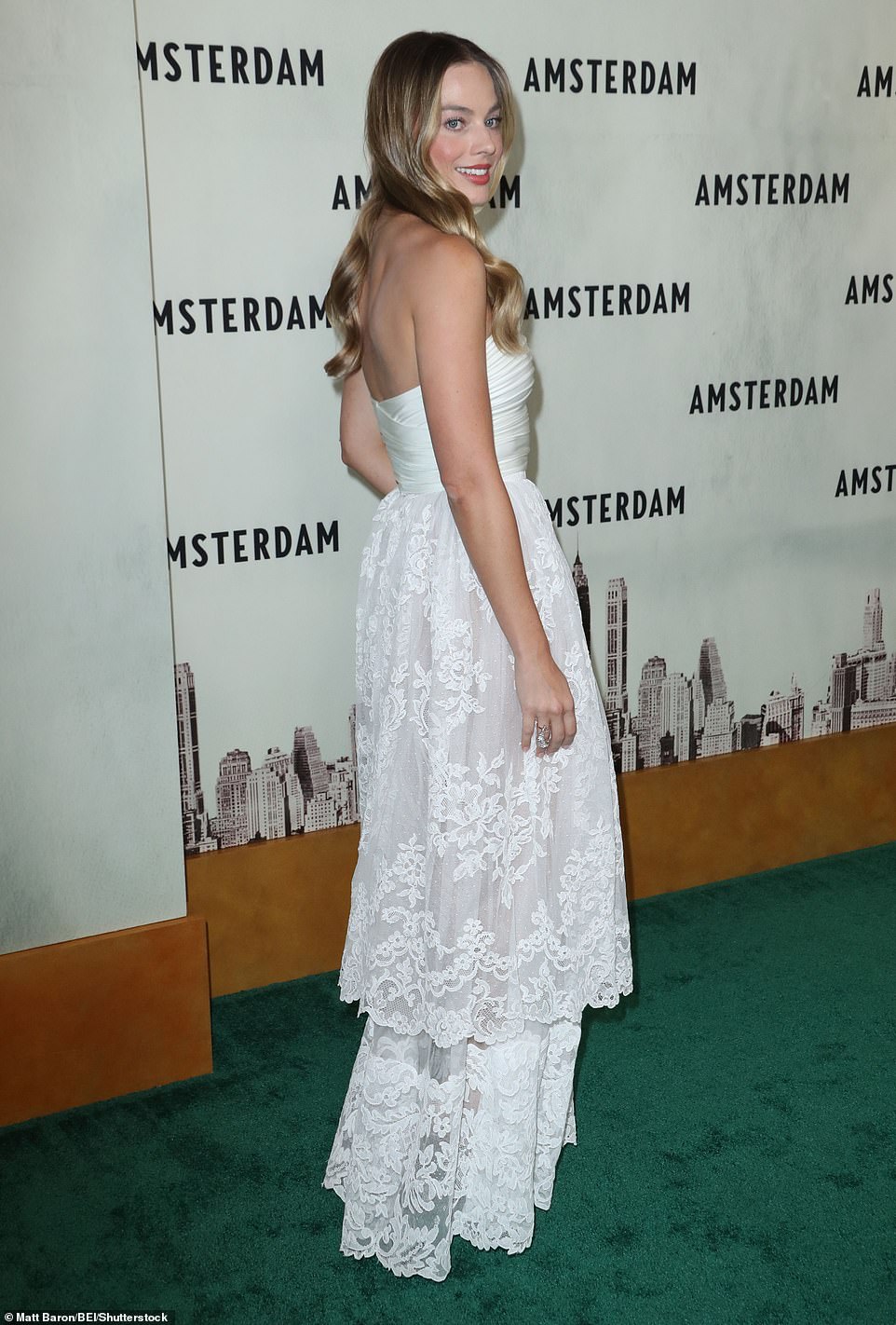 Stylish: Margot showcased her eye for fashion at the star-studded movie premiere in the big apple 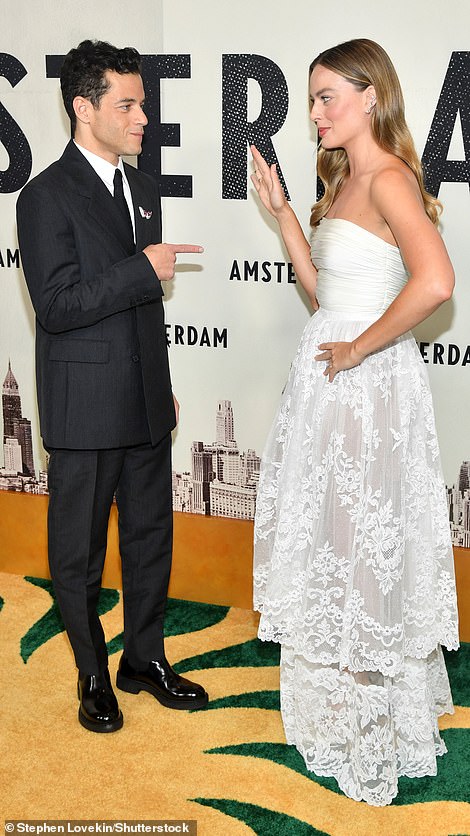 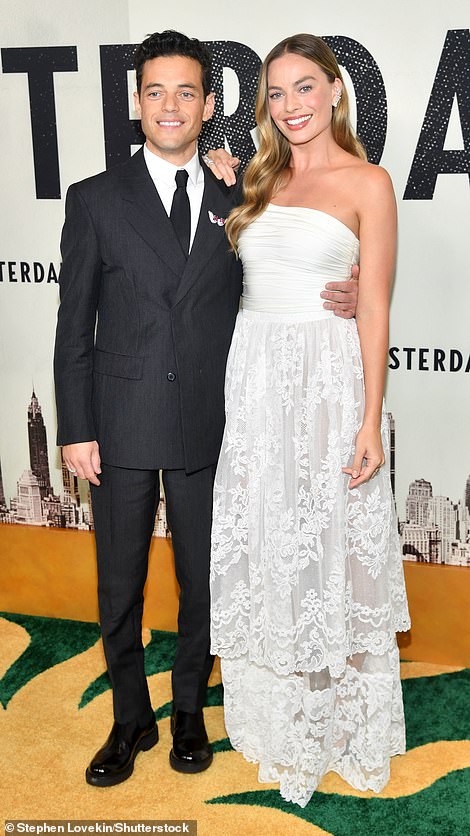 Having a blast: Margot and her co-star, Rami, were pictured having a little fun when they met each other on the red carpet

During an interview with Deadline when discussing the upcoming mystery, David expressed, ‘It’s old fashioned, with a scenario and characters we love. The story goes deep, about love and friendship. It goes deep into murder and events.’

‘And history, which I love. It has many layers, so you can watch it more than once and discover things you didn’t get the first time,’ the talented filmmaker added.

Upon arrival at the premiere, Margot was pictured re-uniting with her fellow cast members and other talent that worked on the project.

She was seen posing for a photo with the director of the movie, along with fellow cast members, such as the Bohemian Rhapsody star, Rami Malek, and Oblivion actress, Andrea Riseborough. 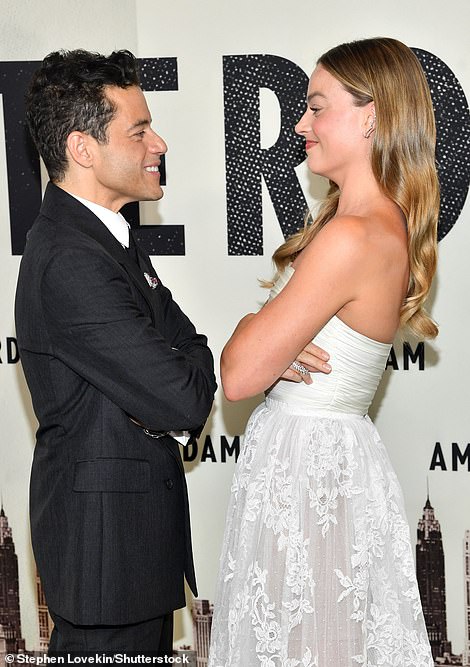 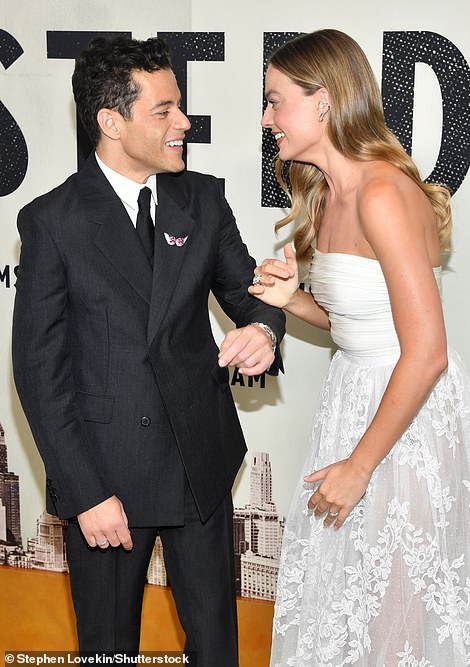 Funny poses: The two actors decided to make a few funny poses for the cameras at the premiere 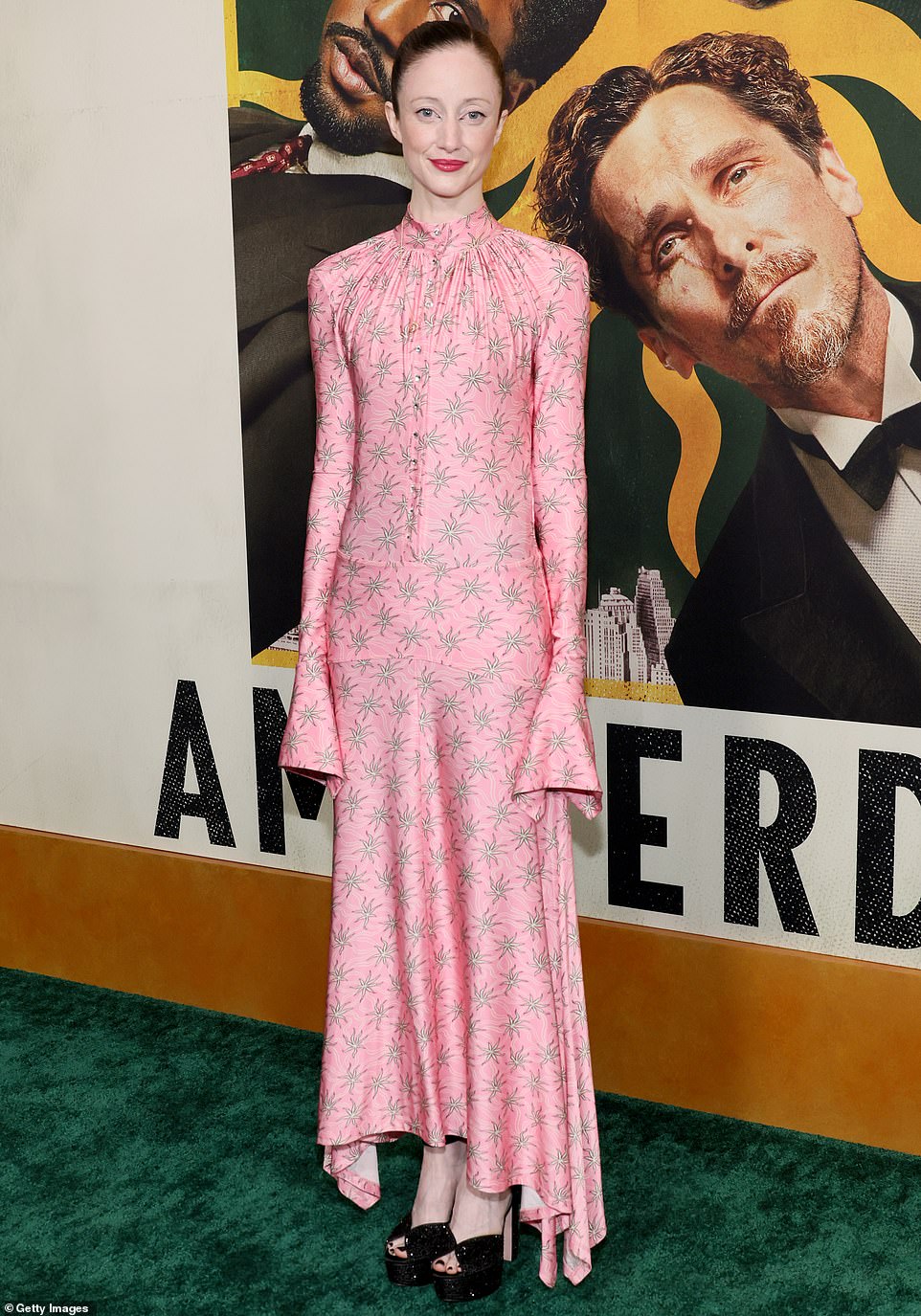 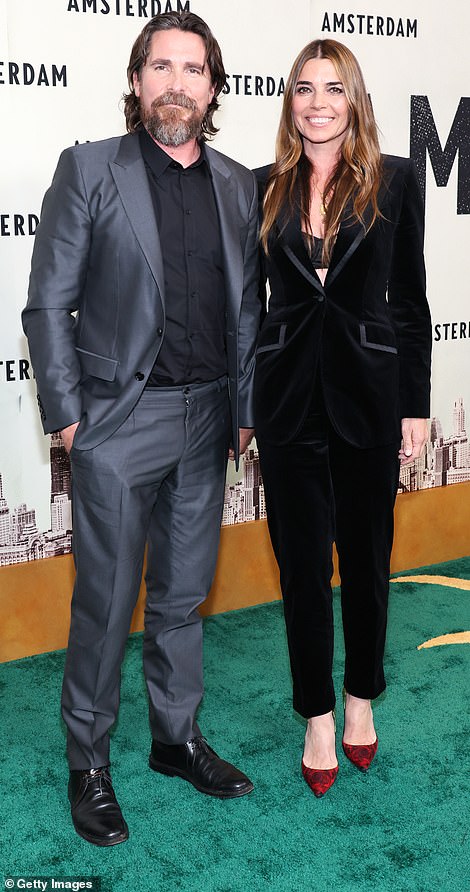 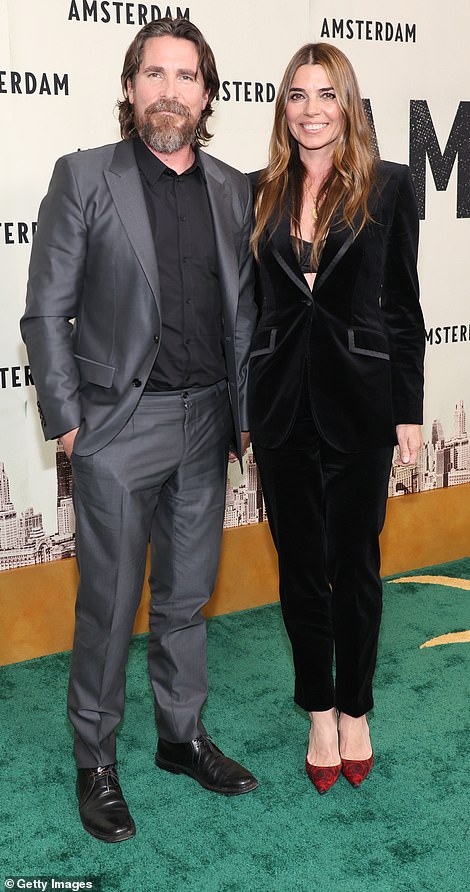 Fashionable duo: Christian Bale, and his wife, Sibi Blazic, both donned stylish suits to walk the red carpet together

Rami donned a classic black suit, which he paired with a white dress shirt and a black tie. A pair of sleek, black dress shoes completed his red carpet look for the event.

Christian Bale, who has a leading role in the film, also attended the glamorous premiere. The Dark Knight actor wore a gray suit while his wife, Sibi Blazic, opted to wear a black, velvet ensemble.

The award-winning actor is not only portraying a character in the film, but was also a producer on the project.

Drake was also at the premiere, and had the opportunity to create music for Amsterdam. He helped co-write a song titled, Time, based on the main score, which was sung by Giveon, according to Deadline. 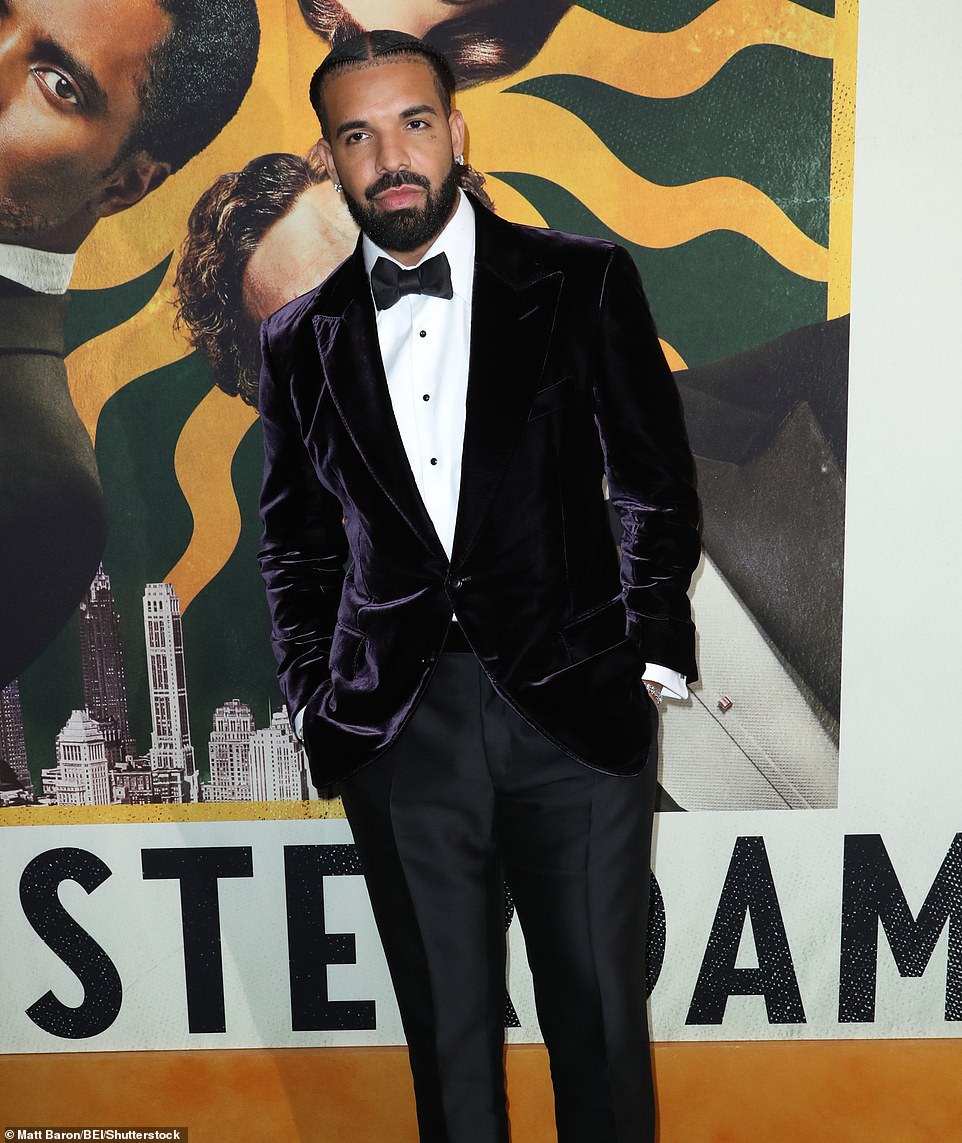 Music for the film: Drake helped co-write a song titled, Time, for the upcoming movie, based on the score’s main theme 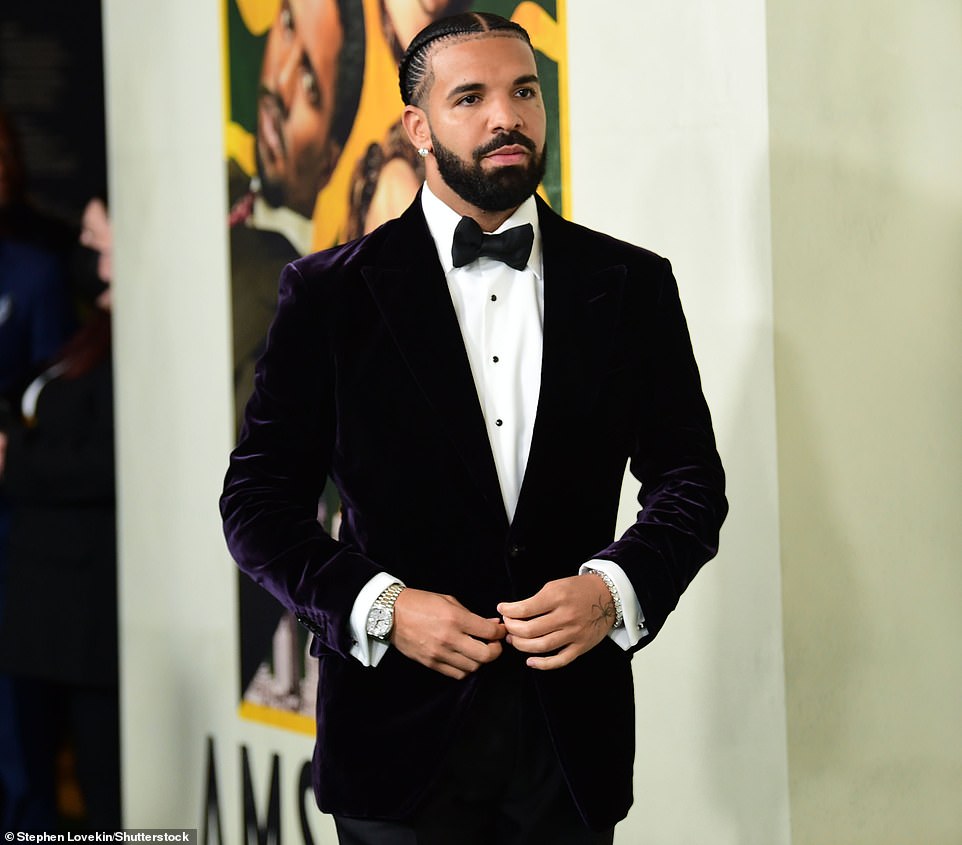 Recognition: The One Dance hitmaker had the opportunity to create music for David O. Russell’s film 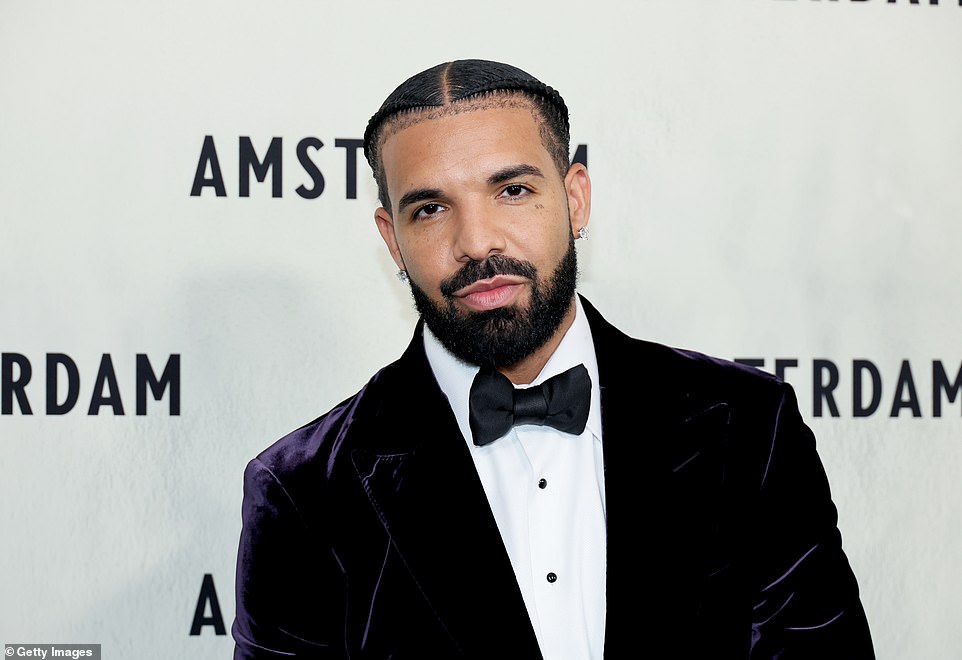 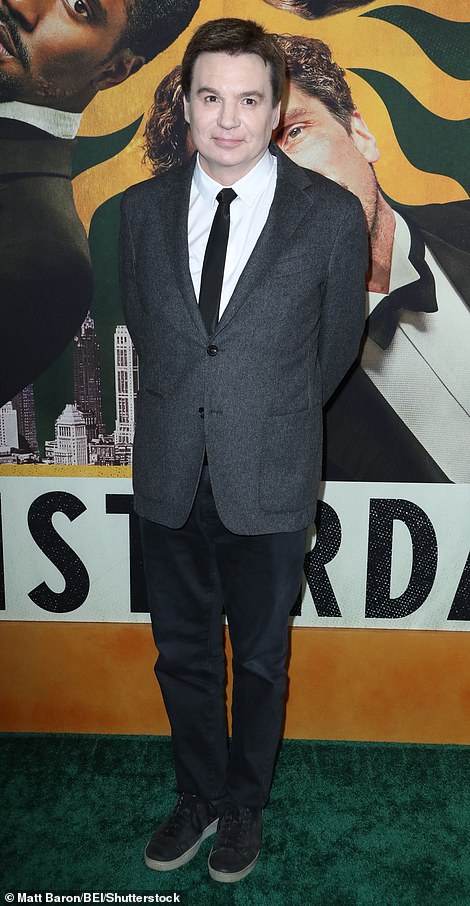 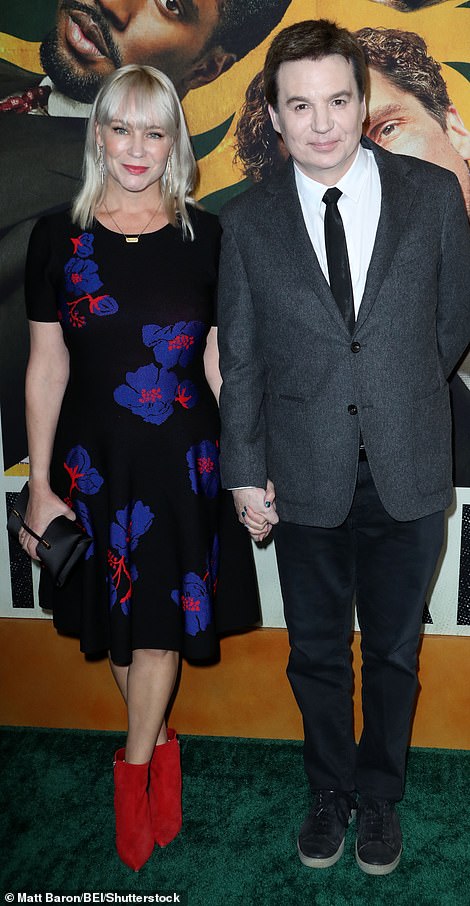 Fun premiere: Austin Powers, alum, Mike Myers, was also in attendance, with his wife, Kelly Tisdale by his side

Austin Powers alum, Mike Myers, was also in attendance, with his wife, Kelly Tisdale, by his side. He was cast to play the role of Paul Canterbury in the film.

Like his fellow cast members, he also donned a classic red carpet ensemble, comprising of a dark suit jacket, black pants, and stylish sneakers. His wife opted for a black and purple floral patterned dress with vibrant red, ankle boots.

Michael Shannon, known for his roles in films such a Knives Out, Bullet Train, and Nocturnal Animals, wore an off-white suit and brown tie. His daughter, Sylvia, also donned a floral gown to accompany her father. 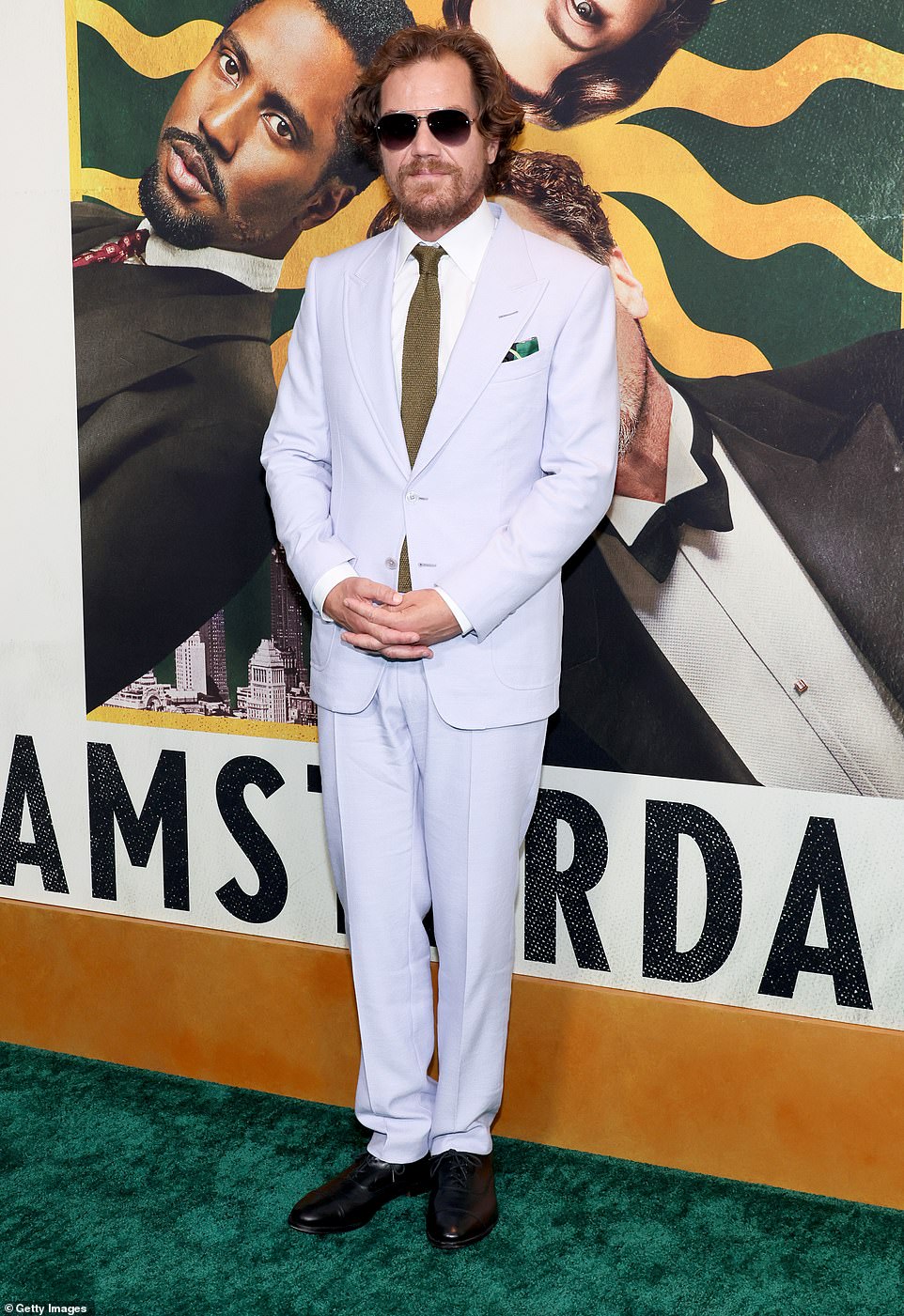 Large cast: Michael Shannon was also in attendance at the premiere, and was cast to play the role of Henry Norcross in the film 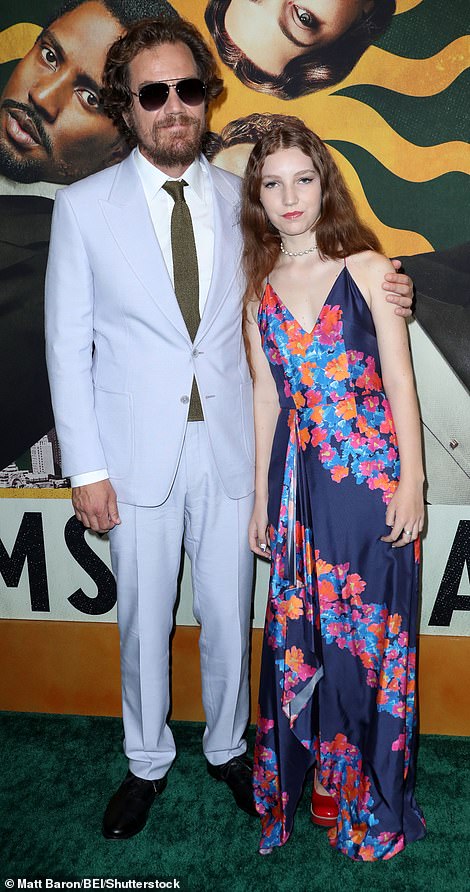 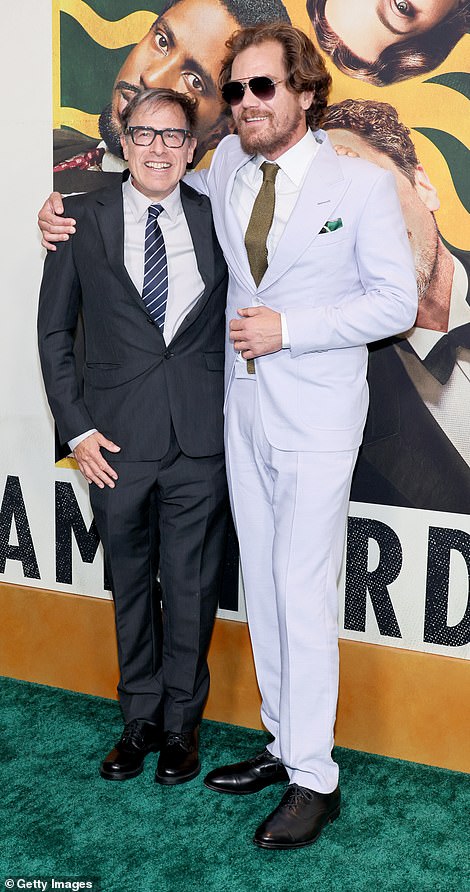 Celebration: The actor posed for photos with his daughter, Sylvia, and director, David O. Russell

Timothy Olyphant kept his look on the casual side, wearing a blue, flannel shirt, green pants, and a tan-colored fedora. A scarf was wrapped snuggly around his neck.

American writer, Carrie Berk, stunned in a green and black strapless gown, which cascaded behind her with a train.

TikTok star, Melinda Griswold along with Alex Griswold, also stopped by to enjoy the thrilling premiere on Sunday.

Casual: Actor Timothy Olyphant along with Melinda and Alex Griswold, kept their looks stylishly casual for the event 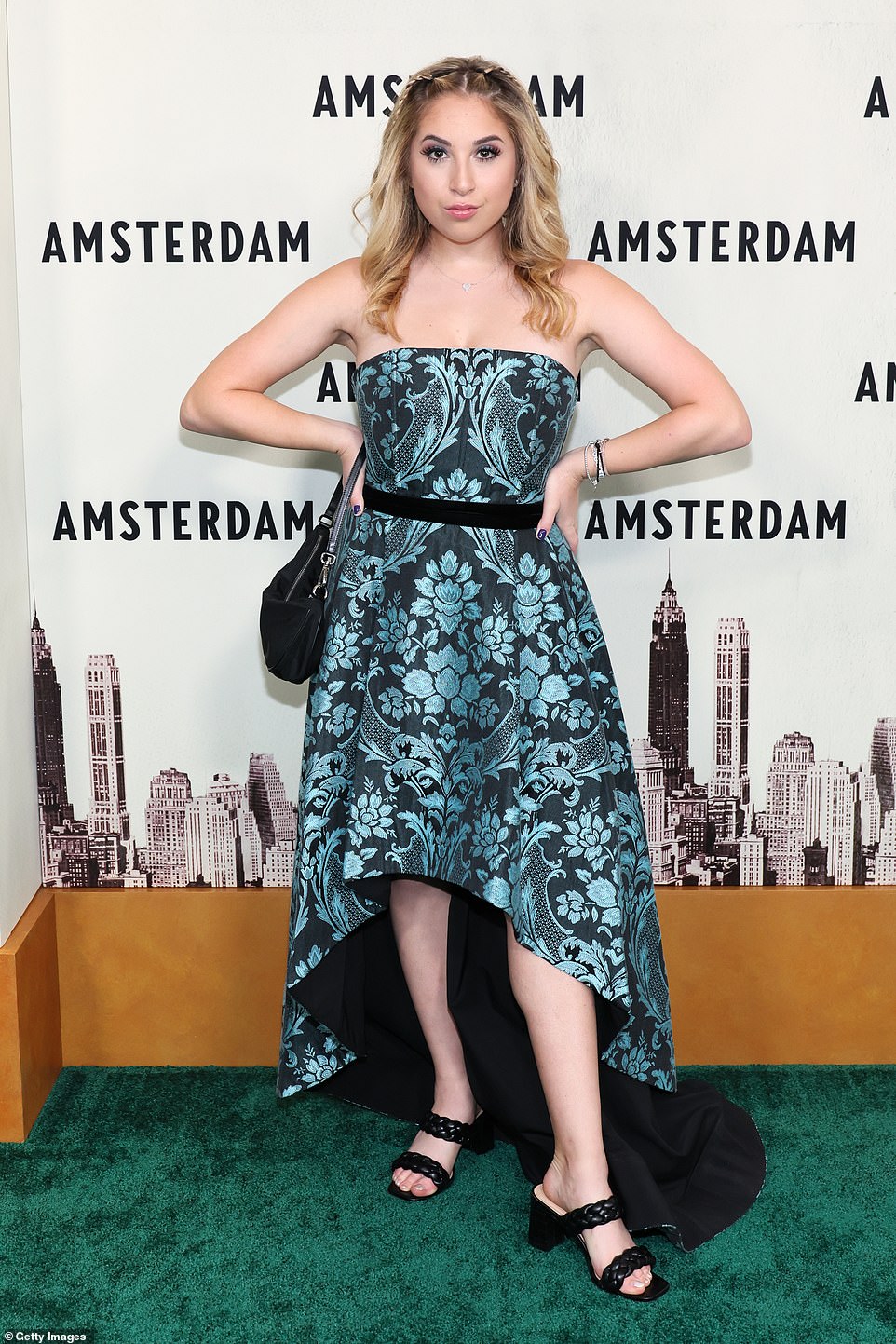 Gorgeous: American writer, Carrie Berk, was also in attendance, and donned a green and black gown

Amsterdam was originally slated to open in theaters in November, however, the mystery comedy will premiere a month earlier on October 7.

When discussing the decision to open earlier and not show the film at a festival, director David O. Russell explained to Deadline, ‘You want to make a theatrical event in Imax. We wanted to do events in London and for it to feel like a cinematic event.’

‘Sometimes that means you go to festivals and sometimes it doesn’t. In this case, we just felt like we were still finishing it when those decisions got made and the music was still coming in. We thought, let’s just make it a great big theatrical release,’ he added.

An additional premiere will be held in London in Leicester Square later this month on September 21. 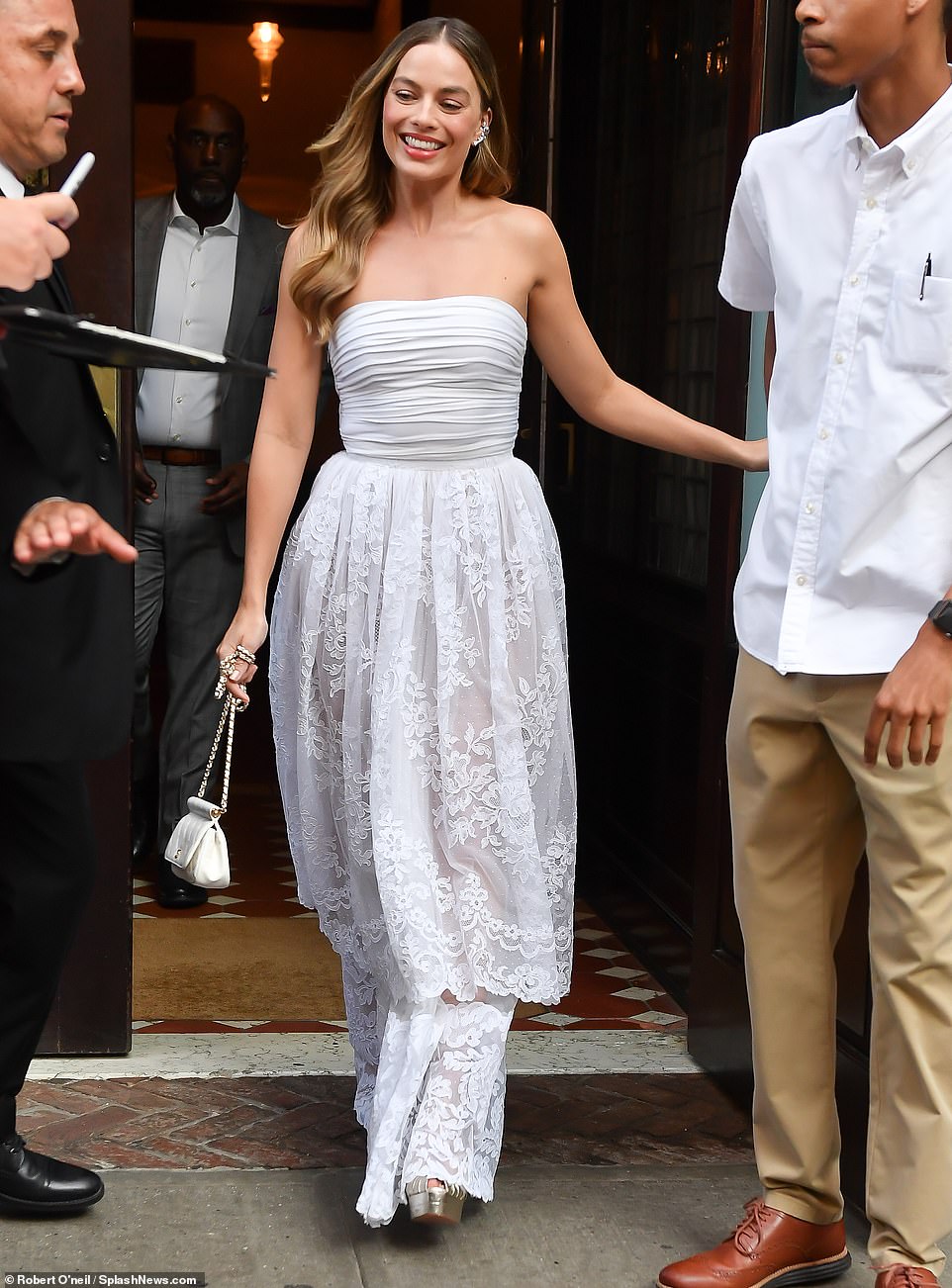 On the way: Margot was spotted earlier on Sunday heading to the premiere of Amsterdam in NYC

Happy: The talented actress was all smiles as she was greeted by cheering fans and paparazzi

Busy: Margot has been working hard on a number of films, including the upcoming live-action Barbie adaptation

Earlier on Sunday, Margot was spotted stepping out into the bustling city as she prepared to head to the Amsterdam premiere.

The star showcased her glamorous lace gown and was all smiles when she was greeted by cheering fans and paparazzi.

The beauty held a small, white Chanel purse in her hand, instead of carrying the luxurious purse over her shoulder.

Margot has a list of other films that she has been working on, including the film, Babylon, starring Brad Pitt, and the live-action Barbie adaptation. 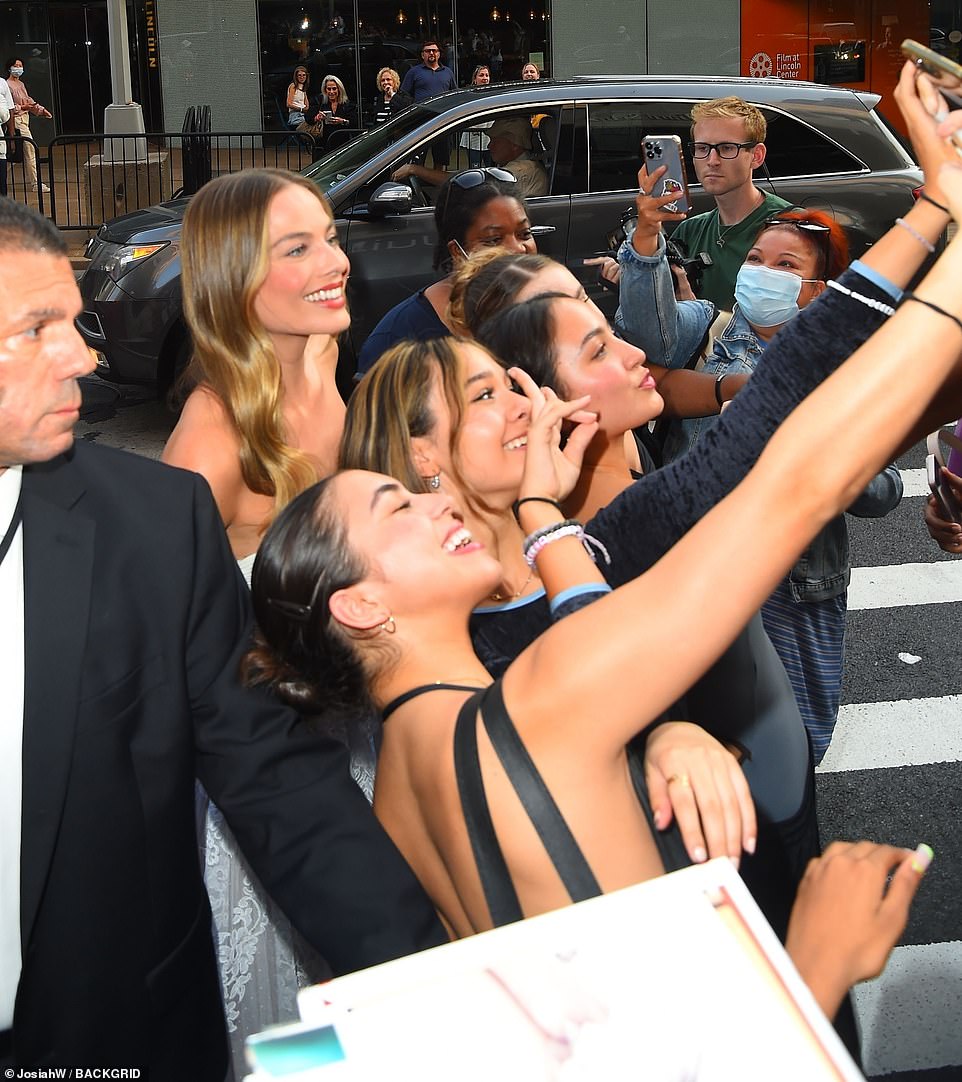 Time with fans: The beauty was spotted taking a few selfies with a group of her excited fans in NYC

A new mystery: Amsterdam contains not only a mystery for the main characters to solve, but also a hint of comedy with a star-studded and talented cast

Lead role: Margot was cast to portray the character of Valerie Voze in the new film directed by David O. Russell