Shares in Auction Technology left investors spooked after it sounded a note of caution over the outlook.

The FTSE 250 firm, which operates as a marketplace connecting bidders with auction houses to buy items such as antiques, sofas and paintings, warned revenues may not grow as fast this year as last year.

It said it expects ‘high single-digit to low double-digit revenue growth’ for the financial year to the end of September 2023. 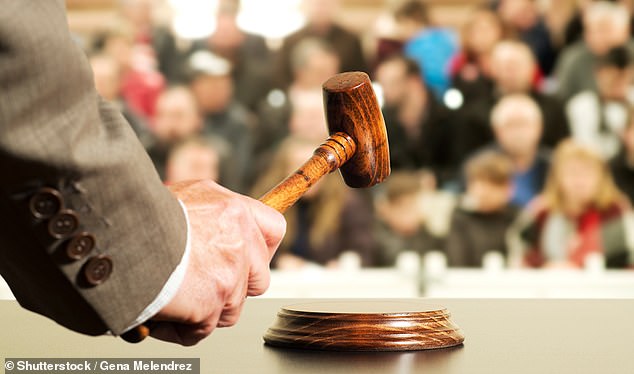 Lower bids: Auction Technology operates as a marketplace connecting bidders with auction houses to buy items such as antiques, sofas and paintings

The prospect of ‘single-digit’ growth raised fears that it will not match the 11 per cent rise in revenues to £119.8million it achieved in the 12 months to September 2022.

The group also swung back into profit of £9million last year, having made a £25million loss 12 months earlier. Auction Technology said its outlook for 2023 was based on ‘high levels of macro-economic uncertainty’.

It will also aim to make £2million of cost savings a year from 2025.

Pearson plunged 5.2 per cent, or 51.6p, to 943.6p after BNP Paribas lowered the education group’s rating to ‘neutral’ from ‘outperform’.

Meanwhile Spirax-Sarco’s acquisition spree gathered pace as the engineer added another business, with a £279.1million takeover of Durex Industries, a US company that makes electric industrial heaters. 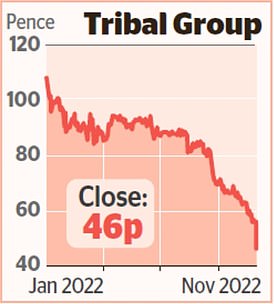 Tribal Group issued a profit warning after pinning its hopes on a contract that is now expected to lose £12million.

The company, which provides software for higher education, thought its contract with Singapore’s Nanyang Technological University that began last year was worth £17million over eight years. But there have been delays to implementation and delivery.

It means profit for this year is now likely to be £9million less than previous expectations. It fell 17.9 per cent, or 10p, to 46p.

On a difficult day for Peel Hunt, the City broker sank into the red after its profits were nearly wiped out due to a lack of companies listing on the stock market.

But business looked good for AJ Bell where profit rose 6 per cent to £58.4million in the year to the end of September as it added more than 57,000 customers.

The increase came despite a 2 per cent fall in assets under administration, to £64.1billion, as turmoil in the markets hit the value of the investments on its platform.

AJ Bell also predicted its profit margins would rise in the coming year as it benefited from higher interest payments from client cash held by the business.

Hotel Chocolat swung to a £9.4million annual loss in the 12 months to June, having made profits of £3.7million a year earlier.

The slump came despite a 37 per cent rise in revenues to £226.1million with sales in the UK up 35 per cent.

It had to write off nearly £30million after its Japanese joint venture went bust.

Kin & Carta found itself at the centre of a shareholder revolt over its remuneration policy.

At its annual general meeting, the digital consultancy business, formerly known as St Ives, said the pay plan was passed despite opposition from more than a quarter of investors (26.9 per cent).