Currys bounced higher as it became the latest firm to be caught up in takeover speculation.

Shares in the FTSE 250 electronics retailer jumped 8 per cent, or 7.45p, to 100.3p after financial news blog Betaville suggested a mystery buyer, possibly private equity, was circling the group.

Currys shares have fallen by around a third over the last 12 months, meaning the firm could potentially be eyed as a cut-price acquisition opportunity. 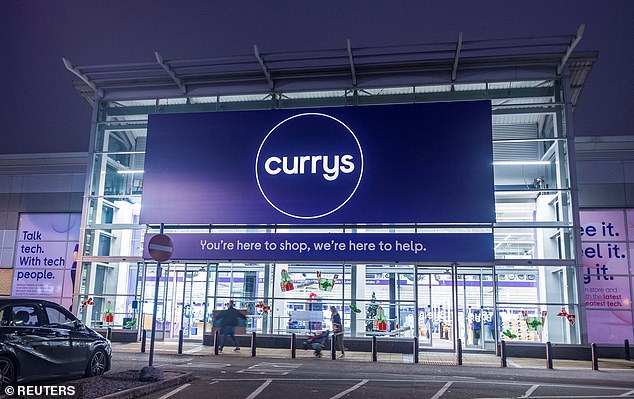 It is the second major company to be drawn into takeover gossip since the end of last week, when shares in Rolls-Royce (up 4.1 per cent, or 4p, to 102.38p) soared nearly 20 per cent on similar rumours before dropping back sharply on Monday when additional information on a possible bid failed to emerge.

Richard Hunter, head of markets at Interactive Investor, noted that the UK market had ‘increasingly become an attractive investment destination for overseas buyers’, with bids flowing in for multiple companies including chemist chain Boots.

‘As such, an approach [for Currys] from a value-seeking investor cannot be ruled out,’ Hunter said.

The blue-chip index managed to regain all the ground lost since the start of the war in Ukraine amid hopes of a breakthrough in peace talks as the Russian side showed signs of softening previous demands. 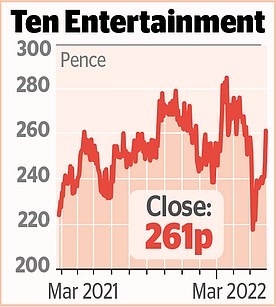 Shares in Ten Entertainment jumped as it swung back into the black.

The bowling alley operator posted a profit for the year to December 26 of £3.1million, recovering from a £19.1million loss in 2020.

However, it expected growth to moderate in 2022 as rising prices and the return of foreign holidays weighed on demand. The shares were up 5.2 per cent, or 13p, to 261p.

However, he warned that the market would face ‘continuing tests’ as the impact of price inflation and interest rate hikes by central banks began to pile on top of the ongoing geopolitical crisis.

Hopes of a diplomatic breakthrough helped lift shares in Ukraine-focused iron miner Ferrexpo, which gained 15.8 per cent, or 26.6p, to 194.5p.

It also updated on its humanitarian efforts in Ukraine, announcing that it had helped provide accommodation and assistance to over 1,400 refugees displaced by the Russian invasion.

Meanwhile, troubled gold miner Polymetal soared 36.9 per cent, or 65p, to 241p after confirming it was ‘evaluating various options’ to change its structure.

The admission followed reports earlier this week that the group was planning to split off its operations in Russia and Kazakhstan to protect itself from sanctions.

Computer game maker TinyBuild jumped 4.5 per cent, or 6.5p, to 150p after posting full-year results that were better than expected.

The group reported a pre-tax profit of £9.5million, up 63 per cent year-on-year, while revenues jumped 39 per cent to £39.7million.

It also remained ‘confident’ about the coming year despite the disruption caused by the conflict in Ukraine.

AstraZeneca shares hit another record high, rising 1.5 per cent, or 152p, to 10046p after good news for Ondexxya.

Coca-Cola HBC, the drinks bottling giant which faced backlash over its decision not to exit its Russian business, added 5.8 per cent, or 92p, to 1681.5p as investors hunted for bargains.

Most and least reliable cars REVEALED