Shares in Serica Energy soared after it announced plans to offset a ‘large element’ of the new windfall tax on North Sea explorers.

Serica, one of the UK’s biggest gas producers, said it will spend around £60million on two projects in 2022, enabling it to reduce its bill.

The update came after the industry was dealt a blow last month when Rishi Sunak hiked the tax rate on oil and gas producers from 40 per cent to 65 per cent to raise cash and ease the pressure on households facing soaring energy bills. 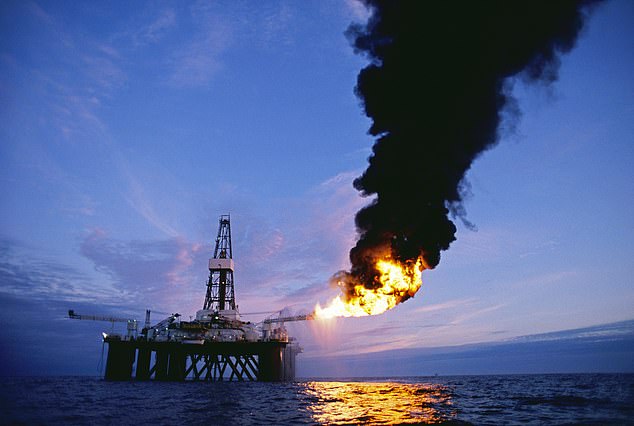 Serica Energy, one of the UK’s biggest gas producers, said it will spend around £60m on two projects in 2022, enabling it to reduce its windfall tax bill

But the Chancellor also said companies like Serica could reduce their tax bill by 91.25p for every £1 they invest in the UK.

Serica is spending the £60million on exploring a new well and boosting production at an existing well, which it expects will be eligible for the tax saving. It said: ‘This will offset a large element of the energy profits levy that would be payable on Serica’s profits this year.’

Chief executive Mitch Flegg warned the instability caused by the tax was unwelcome.

He said: ‘Our industry operates within unusually long investment horizons against a backdrop of highly volatile commodity markets and business cycles.

‘We encourage policy makers to consider the importance of fiscal stability.’ Energy giants Shell and BP have both said they will review their North Sea investments in the light of the windfall tax.

Serica, which produces 5 per cent of the UK’s gas annually, has been a major beneficiary of the soaring gas prices since last summer, making profits of £135.1million during 2021 compared to £12.5million during 2020. 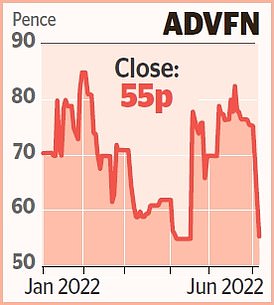 Shares in financial data site ADVFN tanked after it warned of a slump in sales and scrapped its dividend.

In a bleak update, it said sales since the start of 2022 ‘have been disappointing’ and ‘significantly less’ than in the same period a year earlier.

‘In particular, advertising sales have been disappointing reflecting among other things a softer market for financial media,’ the firm said, adding it now faces significant losses.

But energy firm Enquest slid 7.1 per cent, or 2.05p, to 27p after a stock downgrade from analysts at Barclays estimated the windfall tax will reduce its three-year cash flow by $450million (£358million).

Susannah Streeter, markets analyst at Hargreaves Lansdown, said: ‘After the diversions of the Jubilee celebrations, a fresh round of belt tightening is likely, given the ongoing cost of living crisis, so more domestically focused consumer stocks, which don’t benefit from big brand pulling power, are facing uncertain times ahead.’

Airlines remained under pressure, however, amid a spate of flight cancellations.

Pharmaceutical giant AstraZeneca fell 3.5 per cent, or 370p, to 10,072p despite producing ground-breaking data along with Daiichi Sankyo on a breast cancer drug – enhertu.

The drug at some point could be used to treat around half of all breast cancers.

On the rise was Barratt Developments, up 2.1 per cent, or 10.4p, to 510.4p, after the housebuilder began the search to replace its chairman John Allan, who will step down next year.

Shares in Clontarf Energy nosedived after the firm drilled but failed to find anything in the Western Australian exploration well.

Clontarf said the well will be permanently abandoned.