Shares in GlaxoSmithKline (GSK) and its spin-out Haleon got a boost after a rare piece of good news concerning a legal wrangle over the pharmaceutical giant’s former heartburn drug Zantac.

The once-popular drug in the US and UK, which was developed by GSK, was pulled from shelves in 2019 amid fears it contained a cancer-causing chemical.

The incident has led to more than 2,000 cases being filed in the US, raising fears that pharma giants which had sold it could be held liable to pay hefty damages. 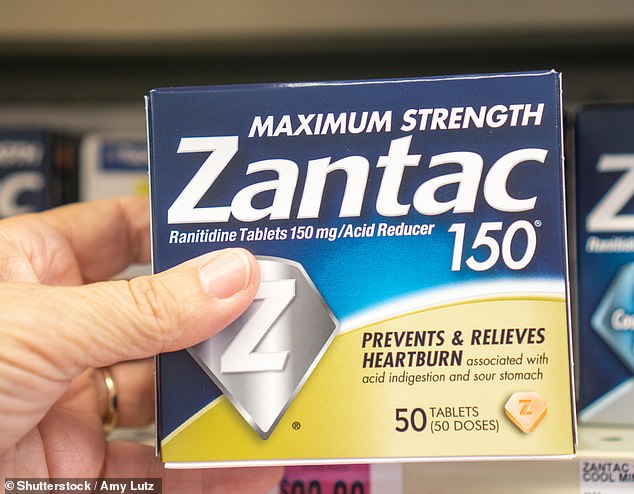 Legal wrangle: Zantac was pulled from shelves in 2019 amid fears it contained a cancer-causing chemical

Haleon, which was split off from GSK last month, could also be on the hook after the drugmaker served notice that it could request payments to help settle any damages claims.

But GSK rose 0.3 per cent, or 4.4p, to 1394.8p after analysts at investment bank Citi highlighted that a recent ruling by a US judge overseeing the lawsuits could mean 70,000 plaintiffs could be forced to abandon their claims due to the statute of limitations, which sets a time limit in which someone is allowed to bring legal action.

The assessment also lifted Haleon 1 per cent, or 2.7p to 266.3p. Citi said if its predictions were accurate the number of plaintiffs in lawsuits would be ‘materially lower’ than originally feared.

If that happens, shares in GSK and French rival Sanofi, which also sold Zantac, could surge by over 40 per cent. Citi’s estimates will come as a relief to both GSK and Haleon – shares of which have been battered over the last few weeks.

Things were less optimistic on the continent with German consumer confidence at a record low as fears of a recession mount.

‘Germany is concerned about rising energy costs in particular, and is particularly reliant on external producers, making the situation more fraught. People are saving at the highest levels in 11 years, showing that consumers are taking tangible precautions in case of the worst-case scenario,’ said Hargreaves Lansdown analyst Sophie Lund-Yates.

Oil stocks came under focus as Brent crude hovers around $100 a barrel amid predictions global supply will continue to be constrained as potential output cuts by the OPEC+ cartel cancel out an expected rise in exports from Iran. Shell was up 0.6 per cent, or 13.5p, at 2334p but BP inched down 0.4 per cent, or 1.65p, to 457.8p.

Holiday Inn owner Intercontinental Hotels dropped 4.4 per cent, or 216p, to 4750p after analysts at investment bank JP Morgan lowered the stock rating to ‘neutral’ from ‘overweight’ and cut its price target to 5900p from 6100p, saying they saw ‘limited upside’ for the shares now most hotels had reopened.

Meanwhile, computer game maker Tinybuild is to buy rival Konfa Games for up to £4.6m in a cash and share deal, and the intellectual property portfolio of Bossa Studios, maker of titles such as I Am Fish, for £2.5m. Tinybuild rose 0.4 per cent, or 0.5p, to 115.5p.