Scott Reid has been pictured as the murderer Ian Huntley on the set of the Channel 5 show, Maxine, on-location at a school in Ireland, with approximately 40 extras, many of them police and media.

Photos from Thursday show an intimidating Scott dressed in a navy polo shirt and trousers, as he spoke to the headteacher while restraining a German Shepherd, which belonged to his ex-girlfriend Maxine Carr. 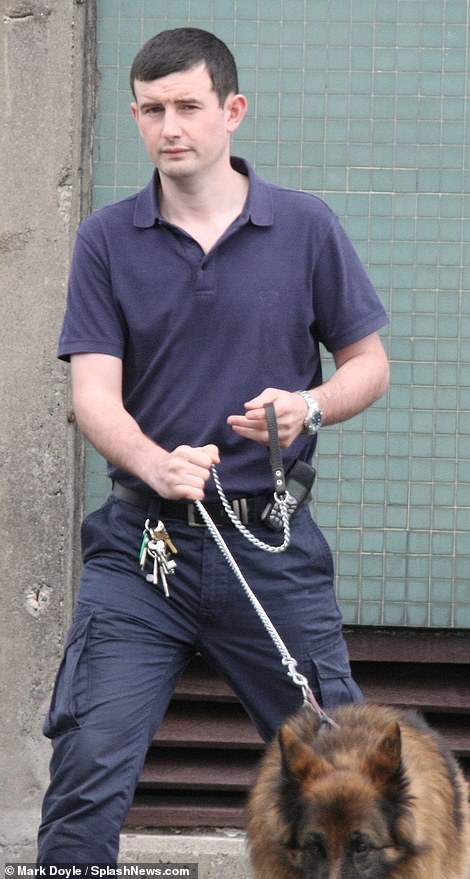 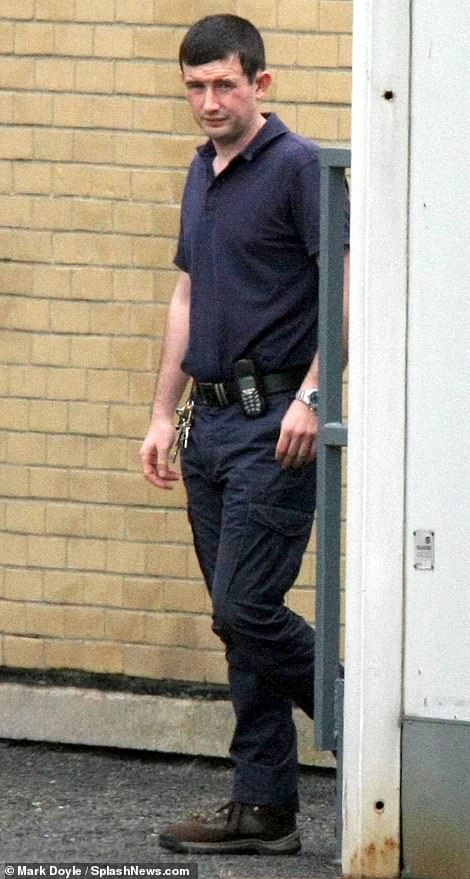 Actor: Scott Reid has been pictured as the murderer Ian Huntley on the set of the Channel 5 show, Maxine

The series will document the investigation through the eyes of killer Ian’s fiancée Maxine Carr.

The disappearance of the schoolgirls after a family barbecue in August 2002 sparked Britain’s biggest-ever missing persons’ enquiry – but came to a tragic end when their bodies were found dumped in a remote ditch.

School caretaker Huntley – then 28 – had lured the girls to his house and murdered them before dumping their bodies and burning their clothes.

His then-fiancée Carr  who provided him with a false  alibi – but was in Grimsby visiting her mother at the time of the murders – was  jailed for perverting the course of justice but released in 2004 with a new identity.

She was dubbed ‘The Most Hated Woman In Britain’ following the trial , which saw Huntley admit to killing the children, but claiming their deaths were accidental.

Scenes for the new drama showed Carr meeting with a journalist who has tracked her down.

Actress Jemma is seen with her bobbed hair in a scruffy updo and wearing a green jacket and jeans as she scowls at a male actor on the seafront. 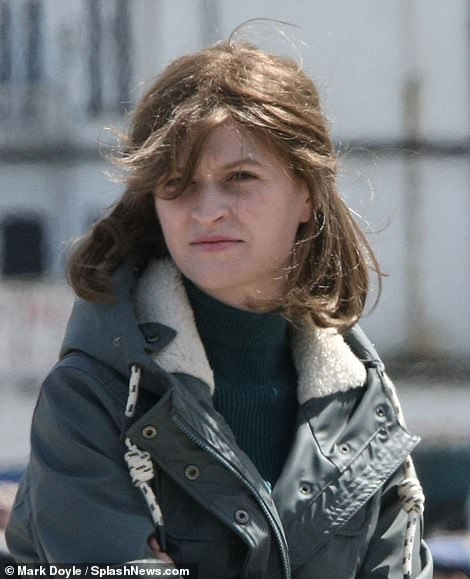 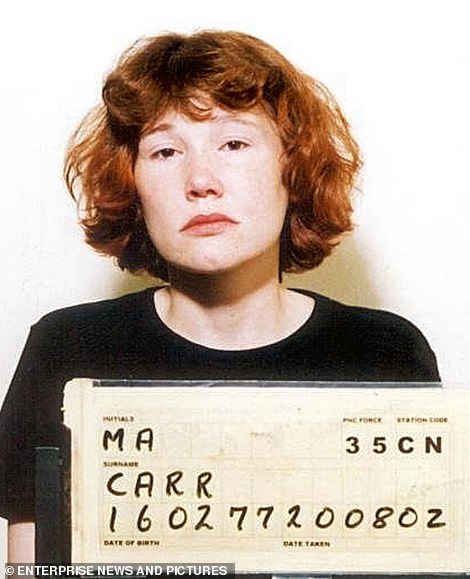 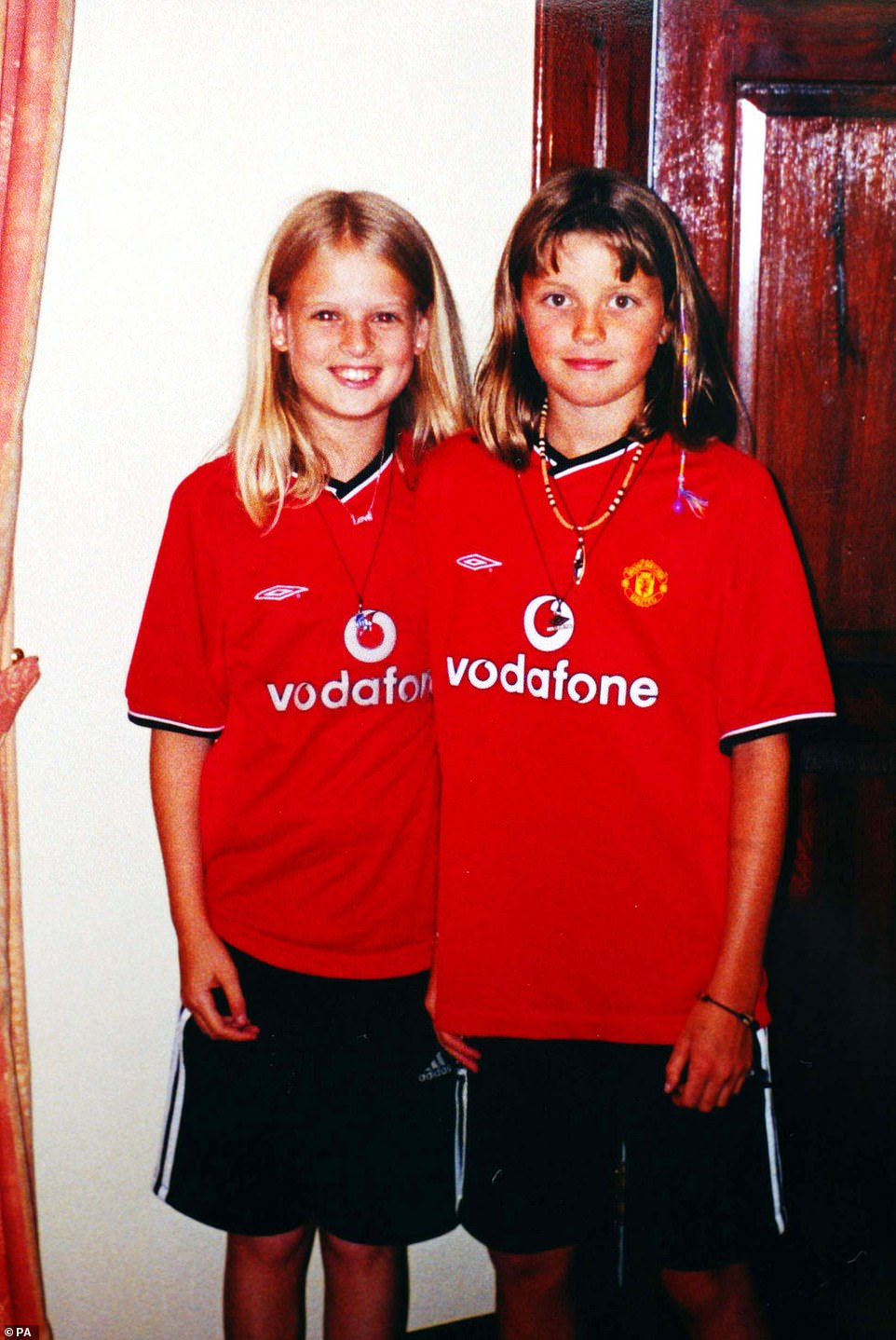 Final photo: Holly Wells and Jessica Chapman were murdered by Ian Huntley on August 4 2002 (pictured two hours before their disappearance) 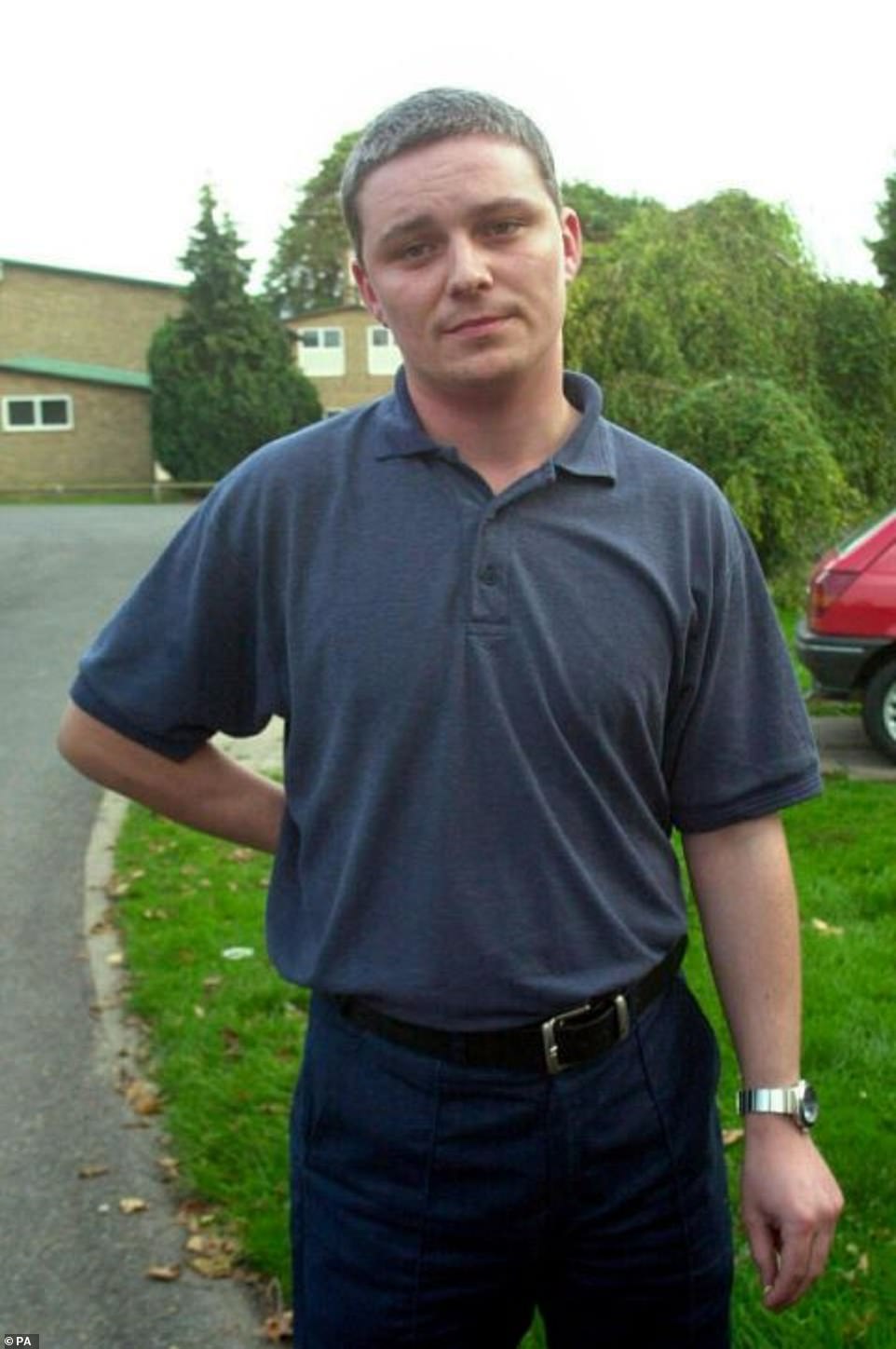 Murderer: Huntley had lured the girls to his house and murdered them before dumping their bodies in a remote ditch. He was a caretaker at the local Soham Village College and was arrested after the girls’ bodies were discovered 13 days later

Channel 5 said in a statement about the drama: ‘Maxine will examine the investigation of school assistant Maxine Carr and her caretaker fiancé Ian Huntley, who was later imprisoned for the double murder of schoolgirls Holly Wells and Jessica Chapman, the tragic case that shocked the nation

‘The three-part drama will explore their tumultuous relationship through Maxine’s perspective; why she lied for him and how she became public enemy No.1, as well as reflect the scale of the police investigation and subsequent media frenzy around the biggest manhunt ever seen in British history.’

Sebastian Cardwell, Deputy Chief Content Officer UK, at Paramount, said: ‘The series marks a new venture into the true crime genre for Channel 5 drama and will give viewers an in depth examination of Maxine Carr and her role in one of the most notorious crimes in recent British history.’

Mike Benson, Managing Director at Clapperboard added: ‘Few crimes have embedded themselves in the national psyche more than the tragic events of Soham in 2002. It was a case which was unique in recent history in terms of the sheer scale of the media coverage and how this affected and nearly derailed the investigation and subsequent trial. We will explore this within the drama alongside the role played by Maxine Carr – dubbed ‘The Most Hated Woman in Britain.’

Maxine will be produced by Clapperboard, Chalkboard’s scripted sister company and is set to air in 2022.

The series was ordered by Cardwell and Paul Testar, Commissioning Executive, Drama.

Mike Benson and Julie Ryan are executive producers on the series. Laura Way (The Holiday, Blood) joins the team as director, whilst Simon Tyrrell (The Spanish Princess) serves as the writer. Abacus Media Rights are on board as international distributor for the series.

Huntley was found guilty of killing both girls at his 2004 trial and later sentenced to two life terms, with a minimum 40-year tariff at the maximum security Frankland prison in Durham.

He was a caretaker at the local Soham Village College and was arrested after the girls’ bodies were discovered 13 days after their disappearance.

During a two-week appeal to find the girls, Huntley gave TV interviews and joined in searches while his then-girlfriend Carr gave him a false alibi.

During his trial, he said that he had ‘killed the girls accidentally’ but later admitted the killing in leaked tapes from prison.

In a 2018 tape he said: ‘I know the people of Soham took me into their community, they trusted me, gave me a job and a home, and I betrayed them in the worst possible way.

‘I am genuinely, genuinely sorry and it breaks my heart when it is reported I have no remorse, that I relish something. I do not.’

He added: ‘I can’t change anything. I cannot remove that day from history, what I have done. I know those girls would be 26 this year with families of their own, jobs and lives. I thought about them when they were turning 21 and when they were turning 18. I know no matter what I say that people are not going to think any better of me … but I would much rather people have the truth about how I feel. I have nothing to gain by saying these things.

‘I know I am never getting out. I have accepted that from day one.’

Huntley said he does not want to be freed from prison and insisted he will not apply for parole out of ‘consideration’ for his victims’ families.

A recent Channel 5 documentary – Soham: The Murder of Holly & Jessica – saw Sharon Gilbert, a former Special Constable with Cambridgeshire Police, reveal how Ian approached her and asked ‘how long does DNA evidence last?’ before joking about killing her just days before he was arrested for the murders.

Sharon said: ‘The atmosphere in Soham was very solemn, there wasn’t very many people walking around, there were lots of police vehicles all over the place, lots of press parked at the end of the street

‘Every window in town had a picture of the girls in the Manchester United tops – with the press rewards.

‘On Wednesday afternoon we were tasked to go to Soham college, and Ian Huntley approached the vehicle and lounged over the hinge section of the door

‘He was very relaxed in his talking, he wasn’t nervous in any way shape or form

‘Normally when you’re sat in a police vehicle and someone comes up to talk to you they ask you about the equipment, the lights, anything else that’s visible. He didn’t want to know any of that

‘Quite early in the conversation he said to me “how long said does DNA evidence last?”

‘I said “indefinitely, they’ve used it on the Russian tsar family and woolly mammoths I believe”

‘Everything about him made me feel uneasy,  he had very strange eyes, like he’s looking at your but through you, like your not there

‘At one point he said the school was locked up, he’d locked it, but he wasn’t sure if it would stay locked because the previous caretaker had left in dubious circumstances and had a second set of keys and it was a possibility he’d been in and out.

‘I spoke to the sergeant and he said straight away it was a missing person’s enquiry and should I feel strongly about it to phone the inquiry line with my concerns.

‘As soon as I got home I phoned the enquiry line, I wanted them to know that he was a person that they needed to have interest in, and it was serious.

‘He’d done something that he was covering up with the way he was talking, and they needed to be interested in him.’

A few days later, Sharon woke up to the news Huntley and Carr had been arrested. 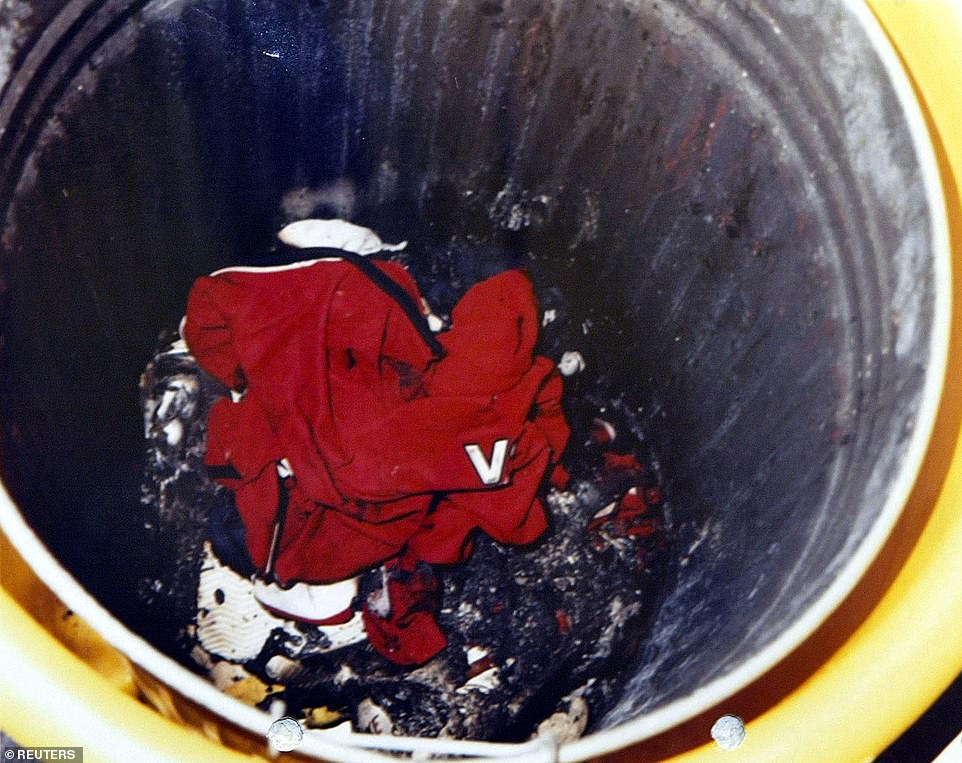 ‘I ran downstairs and phoned the enquiry line again. I said you need to listen to the phone call I made on Wednesday.

‘I’m a member of Hampshire constabulary and I came to Soham and spoke to Ian Huntley and the conversation I had with him would be of interest to you.

‘When they came and took my statement,  one of the officers was sat at my table and every now and again I would say something and he’d go into the hall.

‘I think they were using what was going in my statement to question him’.

The documentary also spoke to reporters who were on the story at the time – including Brian Farmer, a reporter at the Press Association who found Huntley suspicious.

‘The police issued a timeline of sightings, and they said Ian Huntley had seen the girls – although they didn’t say he was the last person to see the girls,’ he explained.

‘I went to the house and   I explained I just wanted to chat and get a few details, and they were quite reluctant.

‘Before she had the chance to answer, Ian answered and said “Holly would  probably get in and be quiet but Jessica would fight and be mad”

‘That’s when I thought something wasn’t right, so I started to ask him more about the girls. He said he and Maxine had been out  for a walk with their dog and he had got wet – he had got a hose out with soap and that’s when the girls came along.

‘And what baffled me was “why didn’t they mention the dog” any child would be taken by the dog.

‘He was describing a conversation an adult would have – not two 10 year old girls, I was wondering, why wasn’t he telling the truth?’.

Huntley had been given an alibi by his girlfriend Maxine Carr – but it was later revealed she was in Grimsby visiting her mother.

Sky News presenter Jeremy Thompson also spoke to the programme, revealing how he interviewed Carr and was struck by how she was talking about Holly and Jessica in past tense. 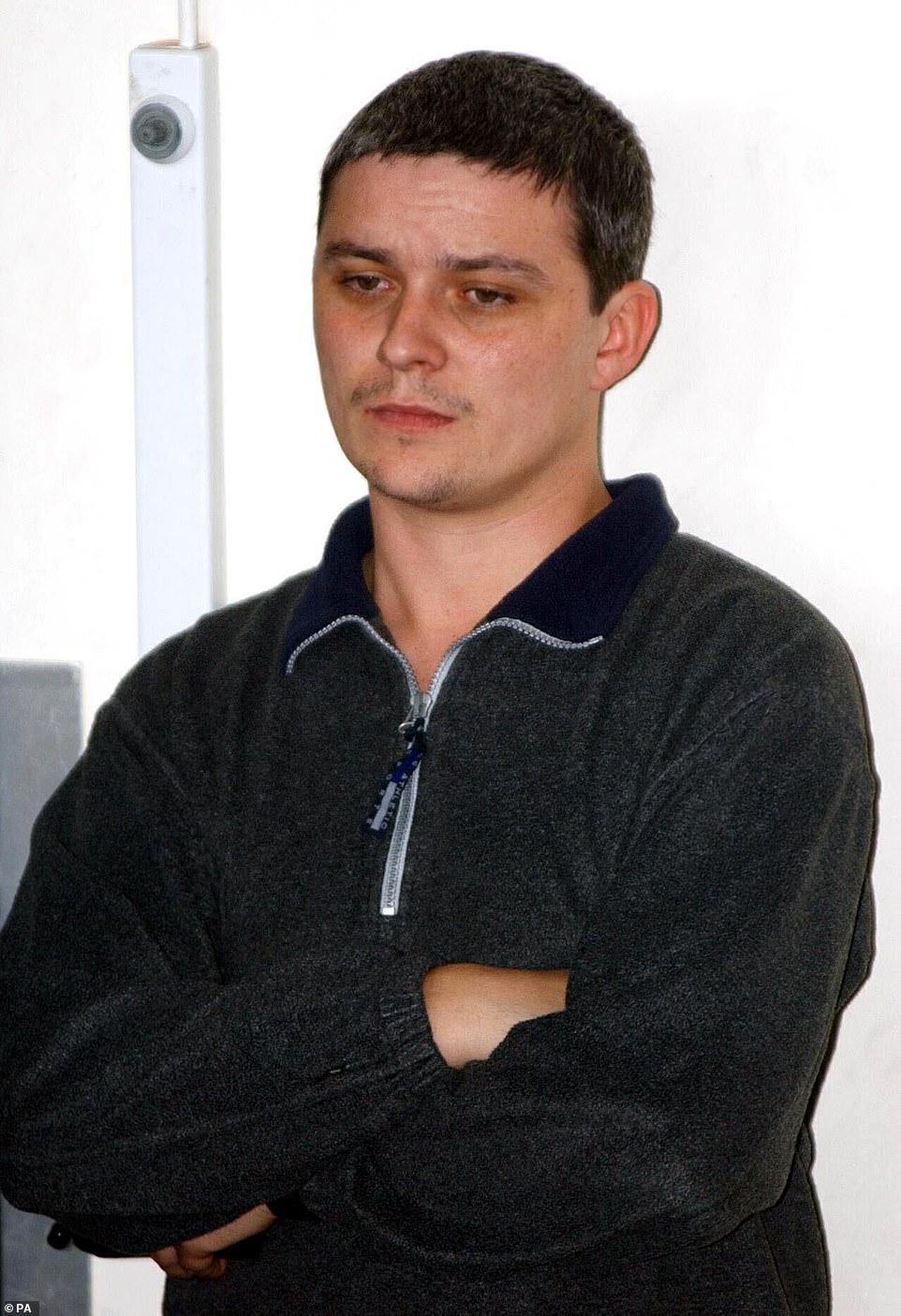 Sickening: Huntley was found guilty of killing both girls and later sentenced to two life terms, with a minimum 40-year tariff at the maximum security Frankland prison in Durham (pictured 2002)