Fans are used to seeing her parade her incredible figure.

And Maya Jama did not let her followers down, as she flaunted her curves on her Instagram Stories in a black skintight catsuit on Friday.

The presenter, 27, looked incredible in the figure-hugging outfit, that clung to her lithe physique. 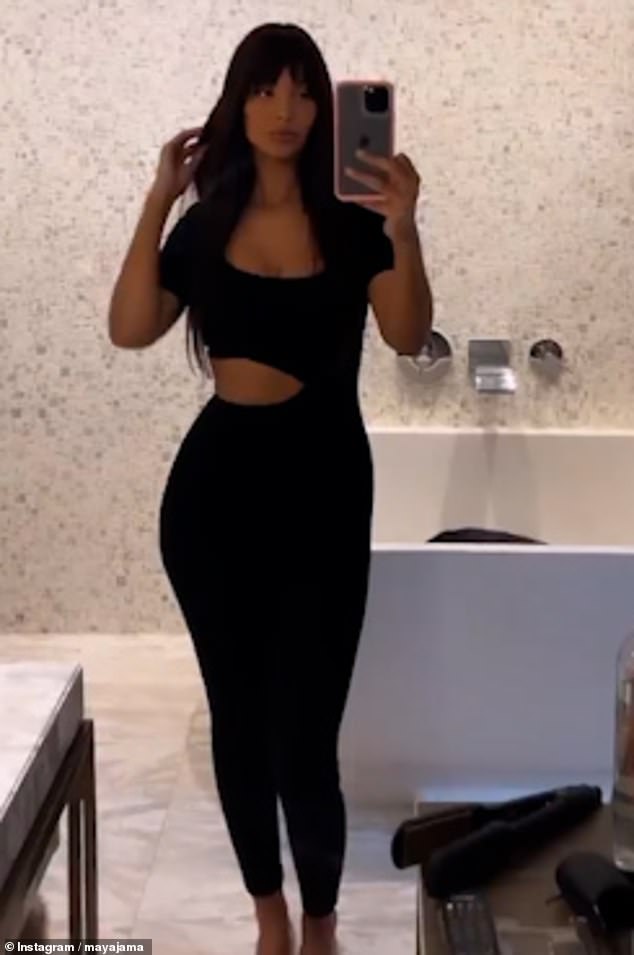 Wow: Maya Jama looked incredible in a skintight cut-out black catsuit on Instagram Stories on Friday after jetting to New York to be with her fiancé Ben Simmons 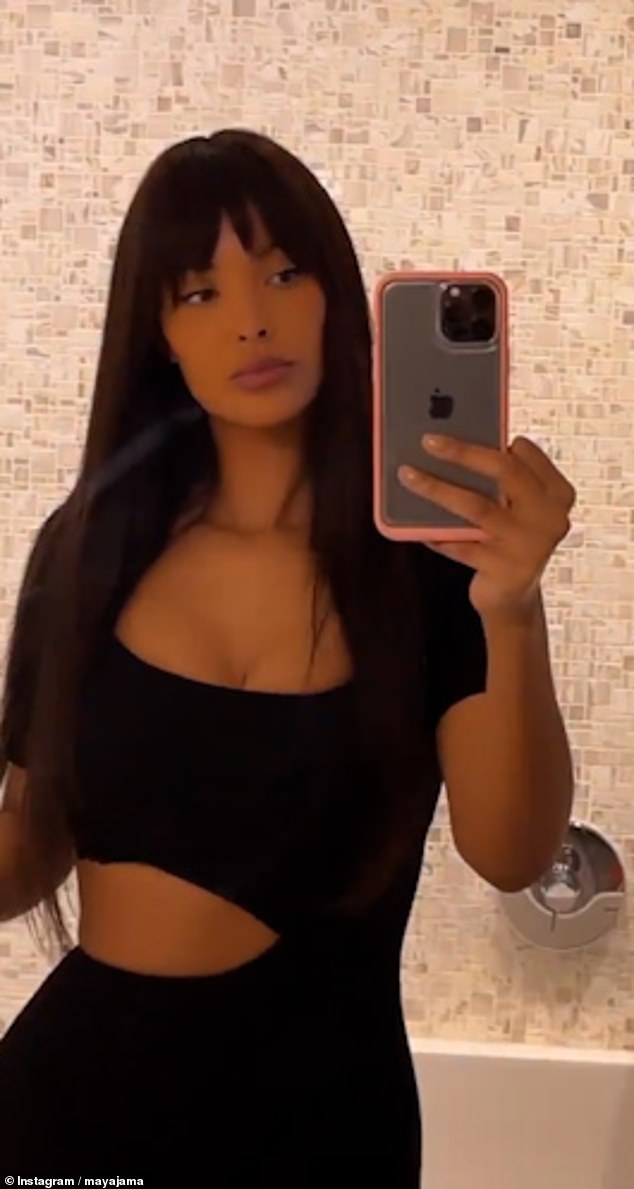 Flawless: The presenter, 27, looked incredible in the figure-hugging outfit, that clung to her lithe physique as she tried out her clip-in fringe

It boasted cutout detailing on the side to flash a peek at her toned midriff, while the low neckline put her ample cleavage on full display.

Maya wiggled her hips seductively as she filmed herself in a bathroom mirror dancing along to music, and showing off her racy ensemble.

Her raven tresses were styled poker straight and left to cascade down her shoulders, while she also sported a new clip-in fringe, which she has affectionately nicknamed ‘Trisha’.

The post comes after Maya was reported to have got engaged to basketball player Ben Simmonds over Christmas after seven months of dating after he proposed in his home country of the United States. 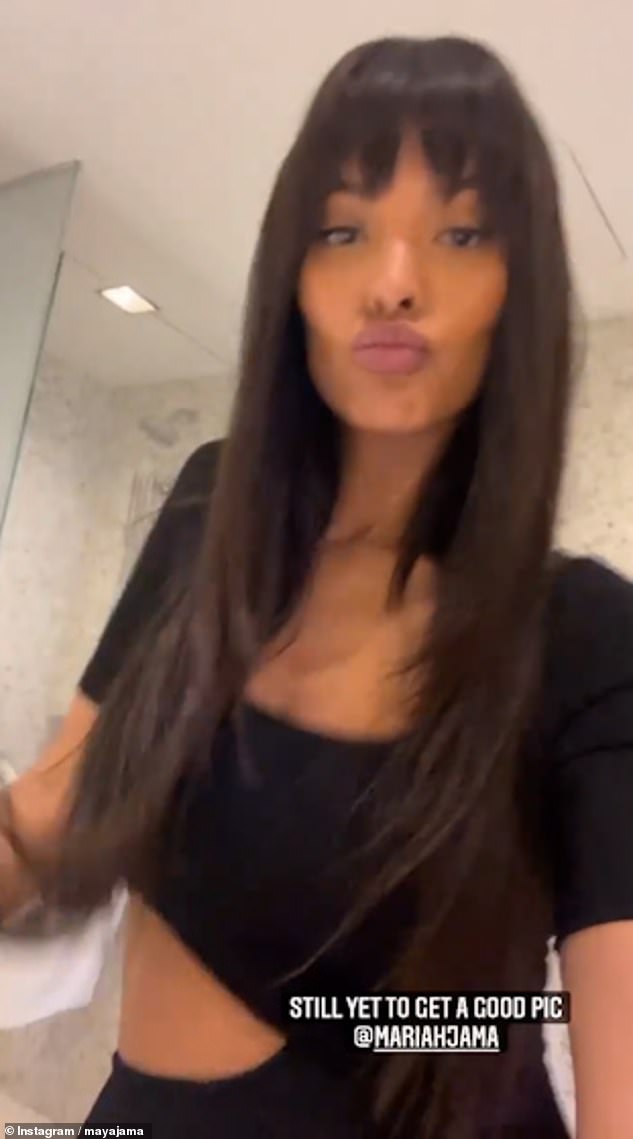 Cutout queen: It boasted cutout detailing on the side to flash a peek at her toned midriff, while the low neckline put her ample cleavage on full display

The Sun recently claimed the pair had only told close friends and family the alleged happy news.

Maya spent Christmas at Ben’s £3.7million mansion in Moorestown, New Jersey and were pictured out together on Thursday after the basketball player was transferred to the Brooklyn Nets.

A source told the publication: ‘Ben adores Maya and has fallen head over heels for her. He picked up the ring on Jewelers’ Row in the diamond district of Philadelphia the day before he proposed.

They added: ‘Ben was so excited, but they’ve decided to keep the news low-key and tell only those closest to them. Maya flew to New Jersey to spend Christmas with him and is still there now. 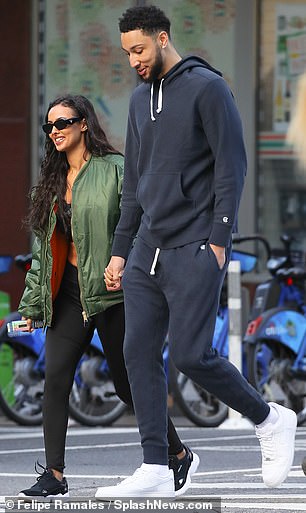 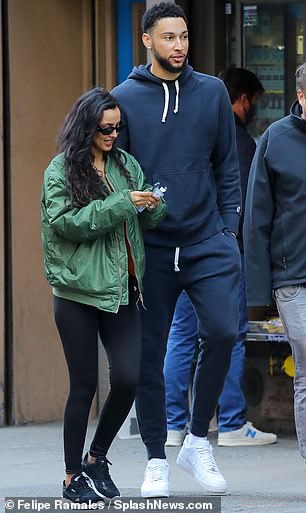 The Big Apple: Maya Jama, 27, enjoyed a low-key stroll with fiancé Ben, 25, in New York, on Thursday, after the basketball player was transferred to the Brooklyn Nets

‘They had a small family gathering last weekend and announced their engagement.’

Maya and Ben were first romantically linked in June, after they were seen together on a night out at restaurant Sexy Fish in London.

The couple went public while kissing in the stands at Wimbledon in front of the world’s media, as they stopped by the annual tennis tournament.

Ben previously dated Kendall Jenner, 25, but the pair called things off in May 2019 after months of dating on-and-off.

Maya, meanwhile, dated rapper Stormzy for four years, with the pair splitting the same year – ending their relationship in order to focus on their careers instead.

The two stars had been one of the most popular couple in showbiz prior to their shock split, with the stunning presenter moving out of their shared home shortly after her 25th birthday celebrations.

Stormzy seemed to address rumours he had strayed in his subsequent music releases – with his song Lessons said to be about the heartbreaking split and lyrics confessing that he had ‘done the dirt’ on the TV star.

However, the award-winning musician later revealed he hadn’t been unfaithful throughout his relationship but instead, admitted to showing ‘disrespect’ to his famous ex. 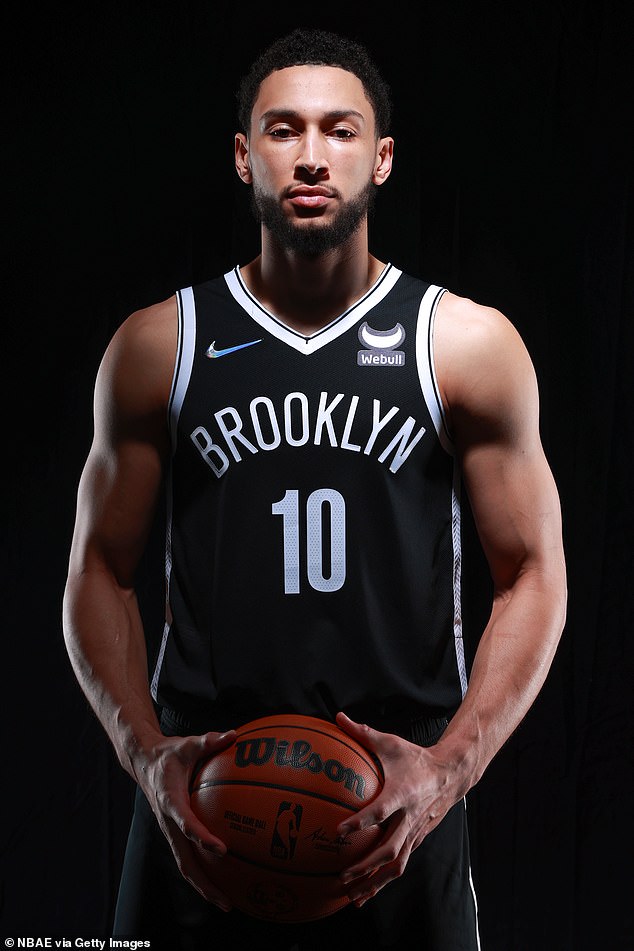 Sporting star: Ben is an Australian professional basketball player for the Brooklyn Nets and recently transferred from the Philadelphia 76ers