Madeleine McCann disappeared on May 3, 2007, while on holiday in Portugal. She went missing aged just three, and would be celebrating her 19th birthday next week.

This evening, a crowd gathered by the war memorial on Cross Green, for what the nearby Sacred Heart Catholic Church described as a “gathering […] for Madeleine McCann and all missing children”. A quick head count suggested 80 people had gathered for the “service of hope” after two years without meeting due to the coronavirus pandemic.

After 15 years, the “gathering” had become more of a service, replete with its own service sheets and traditions. A poem, written by Simon Armitage for the 1,000th day of her disappearance was read out again because, as Reverend Rob Gladstone, vicar of Rothley Parish Church, said, it “expresses the hope so powerfully that the light from the lantern here in Rothley will finally dispel the darkness surrounding Madeleine’s disappearance”.

Talking to villagers before the service, there was a sense the whole town had a deep and lasting sympathy for the family that had lived a decade-and-a-half without a daughter and sister.

Speaking on condition of anonymity, because “we love them [the McCanns] so much we don’t want it to seem to them as if we are gossiping”, two locals said the family remains “very private”, but has a coterie of close friends and relatives who surround them.

One said: “You just want to love them and protect them.” There is “a lot of compassion” for the McCanns among the residents for the pain they had gone through, and are “surrounded by love”. As if almost to prove the point, a worker at Rothley’s general store says they “don’t make any comment” the moment I mention Madeleine.

READ MORE: Maddie 15 years on: Where is the search now? 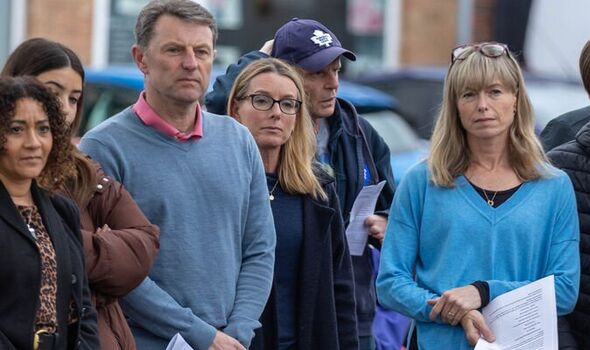 There is ‘a lot of compassion’ for the McCanns among residents for the pain they had gone through (Image: Terry Harris/Reach)

Earlier this year, Aagje Ieven, secretary general of Missing Children Europe, spoke of the “complex grief” that families of missing children feel. She described it as a state in which “you need to find some way to live with the fact that your child is not there anymore, but not being able to put it in context”, something which was “really challenging for families”.

Locals appeared sensitive to the complexities of emotion that the McCanns must undoubtedly feel.

One woman in Rothley mentioned a general feeling of “sorrow”, before adding that she has “mixed feelings”. Despite the beliefs of investigators working on the case in Germany, many in the UK – including the Metropolitan Police’s dedicated Operation Grange – are still treating Maddie as a missing person.

In a statement published yesterday (Monday), Madeleine’s parents said that marking the 15th anniversary of their daughter’s disappearance “feels no harder than any other but no easier either”.

15th anniversary of their daughter’s disappearance ‘feels no harder than any other but no easier’ (Image: Terry Harris/Reach)

‘Although Leicester’s all rooting for them, [Rothley] is their home town’ (Image: Aleks Phillips)

They noted that it had been “a very long time”, but added that “knowledge and certainty give strength, and for this reason our need for answers, for the truth, is essential”. They thanked all those who had supported them, writing: “It is a huge comfort to know that regardless of time passed, Madeleine is still in people’s hearts and minds.”

In Leicester, where the McCanns work, warm words echo the McCanns’ sentiments, but the city appears to have largely moved on, marking a divide with nearby Rothley.

Several people say that it only becomes a topic of conversation when fresh revelations are televised.

Michael, a fruit seller in Leicester’s 800-year-old market, said: “You’re the first person to have brought Madeleine McCann up to me in about 10 years.”

As someone with two children of his own, he added: “They want closure on it; any mum and dad wants closure on it. There’s no real certainty of what’s happened out there, no real truth at the minute. If I had any hair left I’d pull it out. And it’s so close to home as well.”

He went on to describe it as an “absolute disaster” that was “not really something you’d wish upon anybody”.

Vicki, another fruit seller, said: “I don’t think people will ever forget, Leicester people.” She added: “It’s upsetting for everybody there because there’s been no closure […] Until that time comes, a lot of people won’t be able to close the book.

Vicki says of the village: “Although Leicester’s all rooting for them, that’s their home town.”

Others describe the situation as “sad” and “terrible”, but there’s not the same quiet anguish seemingly felt in Rothley.

Younger people reinforce the view that Madeleine’s disappearance is not much talked about anymore.

Precious, a local sixth former, said “now and again there’s a documentary that comes out and people talk about it again”. Aisha, a college student, said that it was “so long ago” that Maddie disappeared, they know little of the case – a view her friend, Sid, agrees with.

At Leicester City FC’s stand in Victoria Park, a woman from Argentina who does not know the specifics of the case, said: “you never forget a child”.

Back in Rothley, locals said Madeleine’s disappearance is something that is no longer mentioned. But rather than this being the result of fading interest, it appears to be another facet of the protection they purport to afford the McCanns.

Madeleine went missing in Praia da Luz, a coastal town in the Algarve, after being left asleep with her siblings in the family’s ground-floor apartment of the Ocean Club. Her parents checked in on the children throughout the evening, until Kate discovered Maddie was gone at around 10pm.

Her disappearance sparked a Europe-wide missing persons investigation that now has three different police forces trying to bring the McCanns closure. But all the talk of suspects and evidence and potential charges is nowhere to be seen in Rothley.

Rev Gladstone said that the gathering was “to show solidarity with Gerry and Kate […] and other grieving families”. The group thanked God “for sustaining Gerry and Kate through these painful years”. A prayer was also said for the children of Ukraine, a cause which the Find Madeleine campaign has promoted since the invasion.

The gathering, of approximately 80 people, was also wrought with symbolism. The Reverend began by holding up a forget-me-not flower as a “visual aid […] not to forget those missing children”, and later noted that it was apposite that Easter had just been celebrated – a marking of “darkness into light”.