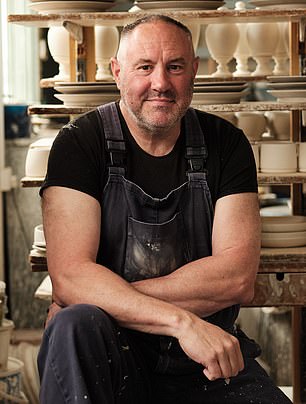 The potter and ceramic designer Keith Brymer Jones was once paid ‘silly’ money to create a pot out of mincemeat with comedian Harry Hill.

Brymer Jones, star of The Great Pottery Throw Down, will never forget just how greasy and disgusting that experience was.

The 57-year-old tells Donna Ferguson he has bought a chapel in North Wales as a home and studio – but can’t move in until the pigeons that have roosted there for a decade move out. His autobiography, Boy In A China Shop, is out now.

What did your parents teach you about money?

That money isn’t everything – so make sure you enjoy what you do for a living. I come from a fairly middle class, suburban family. My father was a building society manager, a job he hated, and my mum was a stay-at-home mother.

Money was not an issue. We went on holidays every year and got a new car and decorated the house quite frequently.

But then the financial crash of the Eighties happened when I was in my late teens, and things went a bit awry for my parents. Interest rates started going through the roof. They didn’t really know how to cope. Money became tight and my mother went back to work as a teacher.

Have you ever struggled to me and my money make ends meet?

Yes, in the early 2000s. Throughout the Nineties, I used to design and hand-produce ceramics for large retailers such as Habitat, Marks & Spencer and Laura Ashley. I was the only person hand-making products for household retailers and they really loved it.

But in 2003, one retailer – I won’t mention the name – cancelled several huge orders after I had already bought all the materials and equipment I needed.

I was left high and dry, with all these materials and a very big VAT bill to pay. On top of that, I had already started making some of the orders, and found no one to sell them to.

Things got very tough for me. I had to remortgage my house to pay my bills.

I started having sleepless nights. I couldn’t stop thinking about money. I didn’t know how I was going to get through each day. It wasn’t good for my mental health.

To turn my fortunes around, I started to rethink how I was working. I realised that making handmade products for the retail industry wasn’t viable any more. So I started producing work out of the Far East for retailers, which meant I could make a bigger profit.

Have you ever been paid ‘silly’ money?

Yes, for doing a comedy sketch with Harry Hill. I was asked to throw a pot on the wheel – but out of mincemeat, not clay. I got a stupid hourly rate: about £250 an hour for an afternoon of my time.

We had to add all this grease to the mincemeat so it would stick together. It was disgusting. But it was a lot of fun.

What was the best year of your financial life?

It was 1995. I threw thousands of pots at my wheel that year. The biggest order was for 16,000 pieces of ceramics from Habitat, which took me three months to do by hand. Margins at that time were very good. I made a six-figure sum that year.

What is the most expensive thing you bought for fun?

My Grenson boots. They are hand-made British classics and I love them. They cost £560. I bought them in 2015 and I still wear them.

What is your biggest money mistake?

Giving my house away to my ex-wife. I bought a house in Whitstable in Kent for £78,500 in 2000. I gave it to her about four years ago, when it was worth £450,000. Our pensions and other assets were worth roughly the same. But a TV presenter I won’t name advised me to make her an offer she couldn’t refuse, to get a clean break divorce, so I did.

The best money decision you have made?

Also giving my house away to my ex-wife. I remember the judge saying: are you sure you want to do this? And I said, yes, absolutely. It gave my son, who was 11 at the time, security – it meant that he and my ex-wife didn’t have to move house.

Divorces can be very messy and I still feel really good about what I did. It was my best and my worst financial decision.

Do you save into a pension or invest in the stock market?

No. I used to save into a pension, when I was in my early 20s, but now I think they are a complete and utter con. They allow other people to play around with your money. Plus, I don’t see myself ever retiring.

I don’t have the time or the inclination to study the stock market. Investing in stocks and shares is basically legalised betting, in my opinion. It doesn’t inflame me with a lot of enthusiasm.

Personally, I think property, gold and cash are the three things to put your money into.

Do you own any property?

Yes, my partner and I have just bought a massive old chapel in North Wales to live and work in. It’s about 9,500 square feet and has pigeons living in it at the moment – it’s been deserted for about ten years. We’re planning to do lots of weird and wonderful things inside once we renovate it, such as having trees growing indoors.

Right now, we are renting a two-bedroom flat in Margate, but we’re planning to move to North Wales early next year.

What is the one little luxury you treat yourself to?

An incredibly peaty bottle of Laphroaig whisky for £120. I buy one every six months. I have it with ice which, according to my partner Marge, is sacrilege.

If you were Chancellor what would you do first?

I would tax the rich more, by increasing the amount of income tax they pay, and close the gap between rich and poor. There are people working full-time who still can’t make ends meet. The system is broken.

What is your number one financial priority?

To renovate that chapel. It’s the next chapter in my life and I need to get on with it.