With Mr Rees-Mogg now becoming the fifth Brexit Minister in six years, Lord Heseltine used the opportunity to suggest Britain was struggling to find any “opportunity” in Brexit. The openly pro-European peer also used his voice to question the notion of the Brexit Opportunities Minister being a new post, pointing out the office and phone number used by Mr Rees-Mogg is the same as his predecessor Lord David Frost.

Lord Heseltine started by questioning whether Mr Rees-Mogg’s position was doomed before it starts, particularly when it comes to recovering money, part of the Minister’s role.

Writing an open letter in The Guardian, the former Deputy PM said: “Now the prime minister has demonstrated great faith in you not only to conjure up the potential of Brexit but, at the same time, to improve government efficiency.

“I would quietly postpone this aspect of your title if I were you.

“The chancellor would make a bad enemy when you start poking about in the Treasury to try to find the millions lost to fraud.

“Perish the thought, but perhaps that’s why the prime minister gave you the title in the first place!” 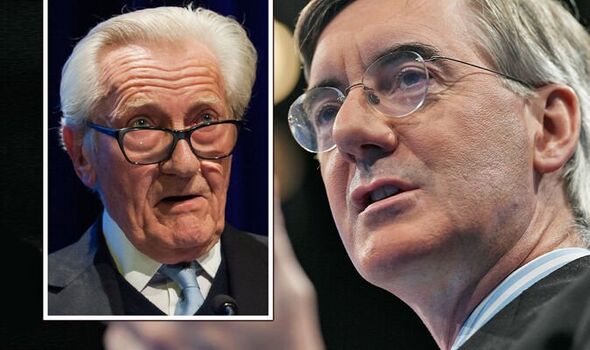 Yet it was Brexit Lord Heseltine was interested in examining more.

He said: “That is why I felt compelled to try to help.

“It is important that your invitation reaches the widest audience.

“You will not want to rely on a few cranks, or on a regurgitated splurge from Nigel Farage.

“You will want to protect your career from any such association.”

READ MORE:
Macron, Major and Heseltine – all of them hypocrite and here’s why

Brexit protesters claim the wheels have “fallen off the Brexit bus” (Image: Getty)

He said: “So how can we help you to find out what people are really thinking and saying, and thus enable you to reverse the present polls, which reveal that a significant majority of people now think that Brexit is going badly?

“A key target for your message must be the small entrepreneurs and the larger British companies, which you must show how to exploit the new commercial opportunities.”

He said: “The truth will out. What does it say so far?

“That the government’s Office for Budget Responsibility has said it expects Brexit to hit the economy twice as hard as the global pandemic.”

The chairman for the Office of Budget Responsibility, Richard Hughes said in October: “Leaving the EU would reduce the UK’s potential GDP by about four percent.

“In the long term, it is the case that Brexit has a bigger impact than the pandemic.”

He wrote: “The president of the National Farmers’ Union, Minette Batters, believes labour shortages related to the end of free movement without adequate replacement schemes led to ‘40,000 healthy pigs’ being ‘culled and simply thrown away … an utter disgrace and a disaster for the pig industry.

“That the National Federation of Fishermen’s Organisations says it expects an enormous public relations campaign to portray the deal as a fabulous victory, but that it will inevitably be seen by the fishing industry as a defeat.

“That the Food and Drink Federation says sales to Europe fell 23.7 percent in nine months in 2021.”

IS LORD HESELTINE RIGHT TO BE SCEPTICAL OVER BREXIT? HOW DO YOU FEEL ABOUT BREXIT NOW? WOULD YOU VOTE TO LEAVE AGAIN? HAVE YOUR SAY ON THESE PRESSING QUESTIONS BY CLICKING HERE AND JOINING THE DEBATE IN OUR COMMENTS SECTION – EVERY VOICE MATTERS!

40,000 pigs were slaughtered due to labour shortages, blamed on Brexit (Image: Getty)

Moving on to the values of European unity, Lord Heseltine delivered a dire warning on the potential effects of war spreading into mainland Europe.

He said: “Nothing so reveals the reality of Brexit as the meeting of European leaders in Brussels, in the aftermath of Vladimir Putin’s assault on Ukraine.

“Our continent faces a threat as severe as anything since the end of the cold war.

“I am ashamed that the country that in my lifetime saved European democracy has now absented itself as others determine Europe’s response.”

Lord Heseltine ended by saying: “There will, Mr Rees-Mogg, be more councils covering the climate crisis, our environment, international crime, control of the internet.

“In every case, we will be absent.

“That is what Brexit means.”