Medical jargon putting patients in harm’s way: From an ‘impressive’ X-ray that’s actually worrying to a ‘negative’ test that should be seen as a positive thing… study calls for doctor’s lingo to be dumbed down

Patients are struggling to understand their doctors because of confusing medical jargon, a study has found.

Almost 80 percent of people do not know that the word ‘impressive’ actually means ‘worrying’ in a medical context.

Critics said using the word borders on ‘disrespectful’ because ‘we’re describing something as impressive that is causing real harm for patients’.

More than one in five percent of respondents could not work out the phrase ‘your tumor is progressing’, which means a patient’s cancer is worsening.

And the majority of participants failed to recognize that ‘positive lymph nodes’ meant the cancer had spread. 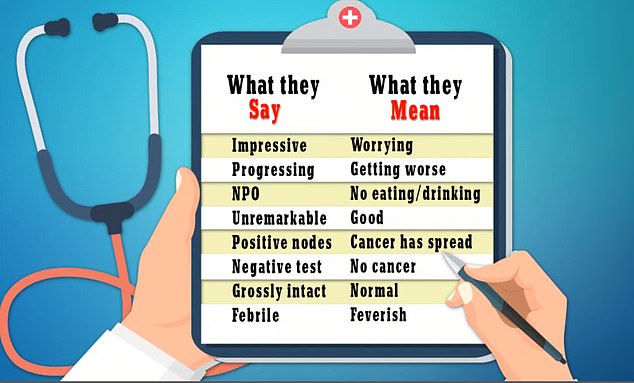 The survey revealed a host of terms which baffled members of the public:

Some 215 people attending the Minnesota state fair in September 2021 were tested on their knowledge of medical terms.

They were given a 13-question survey devised by University of Minnesota researchers, including a mix of multiple choice and open-ended questions.

For example, people were given a statement such as ‘your nodes are positive’, and asked to select if it was good news, bad news, or they didn’t know.

Almost all 96 percent of them understood that a negative result for a cancer screening was in fact a positive thing, and meant they didn’t have cancer.

However, 21 percent of respondents could not work out the phrase ‘your tumor is progressing’, which means a patient’s cancer is worsening.

Similarly, 67 percent of participants did not recognize that ‘positive lymph nodes’ meant the cancer had spread.

The word ‘impressive’ means something admirable to most people.

But when physicians describe a chest X-ray as impressive, they actually mean it is worrying.

Some 79 percent of study participants did not get this meaning.

Only 44 participants correctly understood that a clinician was actually giving them bad news.

He said: ‘It borders on disrespectful because we’re describing something as impressive that is causing real harm for patients.’

A total of 80 percent understood that an unremarkable chest radiography was good news.

When a doctor describes a neurological exam as ‘grossly intact’, this is good news, which was picked up by 41 percent of respondents.

The researchers concluded that ‘care should be taken to avoid using [medical jargon] with patients to prevent misunderstanding’.

The study was published in the journal JAMA Network Open.

From weight loss to better sleep: How Dry January REALLY benefits the body