Rumors have been swirling they have broken up.

But Megan Fox and Machine Gun Kelly put the rumors to bed during a loved-up outing in Brentwood on Tuesday.

The rapper, 32, tenderly held his fiancee, 36, close as they strolled about the neighborhood in their bright and unmissable attire. 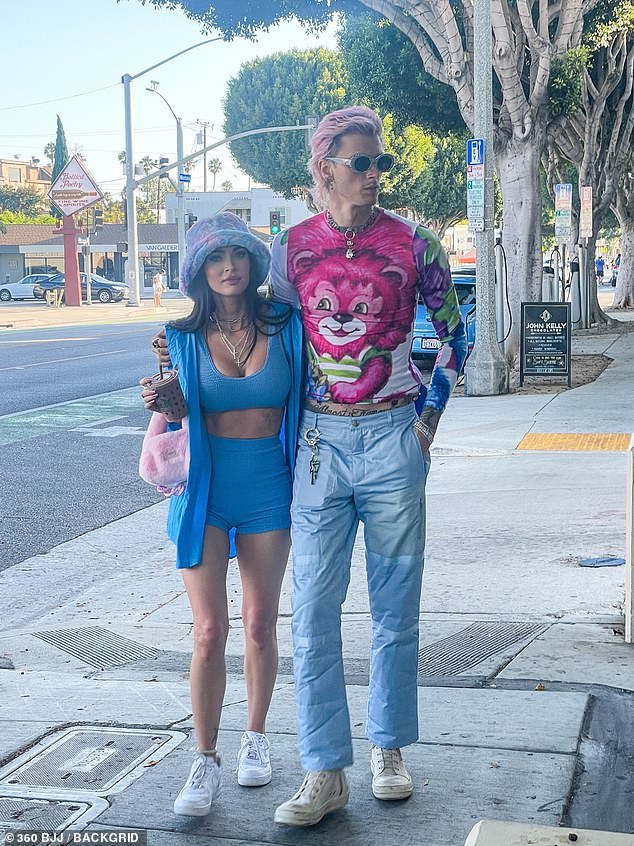 Going from strength to strength! Megan Fox and Machine Gun Kelly put split rumors to rest with a loved-up outing in Brentwood on Tuesday

MGK – real name is Colson Baker – wrapped his arm around Megan as they made their way down the sidewalk.

The Transformers actress put on a head-turning display in a bright blue crop top, biker shorts, and a fluffy tie dye bucket hat.

She wore a soft baby pink purse on her arm and an array of silver necklaces.

Her husband-to-be was just as eye-catching in a bright pink cartoon print top, blue trousers, dazzling shades, and pink hair slicked back.

No missing them! The couple stood out in their colorful and bright attire 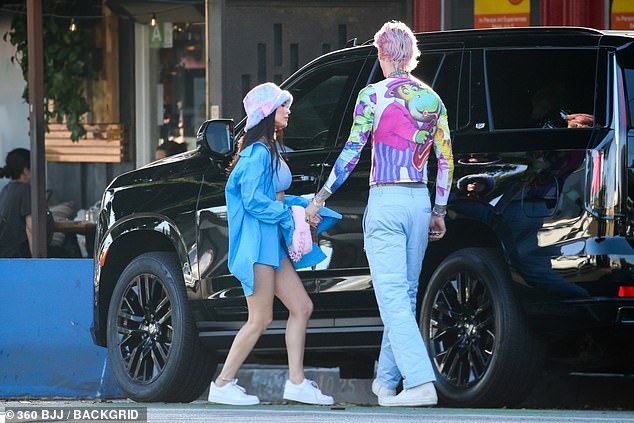 Hat’s off to her! Fox topped off her blue look with a fluffy pastel hued bucket hat

His face was also all cleaned up after he incurred yet another face injury over the weekend by smashing a wine glass against his face during his Cleveland concert.

The couple appeared to be walking at a leisurely pace through the neighborhood as Megan hydrated herself with a cool shake.

Rumors have been swirling as of late that the couple had called it quits with fans noticing Megan had not posted any photos of MGK to her Instagram account since June. 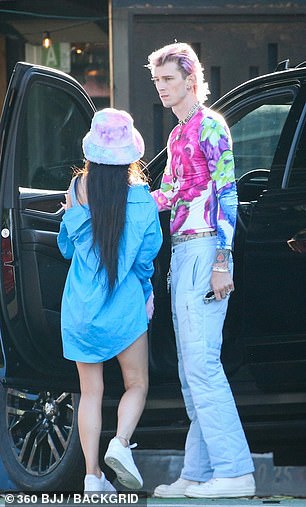 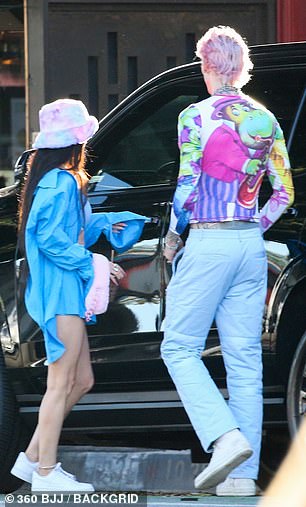 Putting the rumors to rest: Rumors have been swirling as of late that the couple had called it quits with fans noticing Megan had not posted any photos of MGK to her Instagram account since June 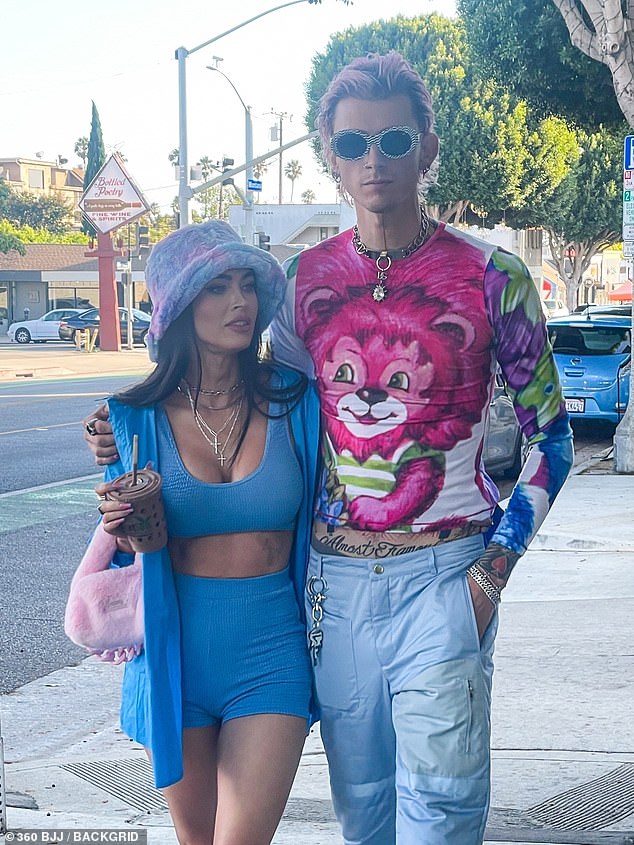 Yum! The beauty kept cool with a hydrating smoothie

The actress was also not present at his concert in his hometown of Cleveland on Saturday.

The latest outing will certainly put the rumors to rest, however, with the couple putting on an affectionate display as they enjoyed some quality time together in LA.

The rapper calling Megan his ‘wife’ during his latest performance also signals the strength of their romance.

‘I talked to my wife before I got on stage tonight and I said,’ he said during his Cleveland show, according to Newsweek. 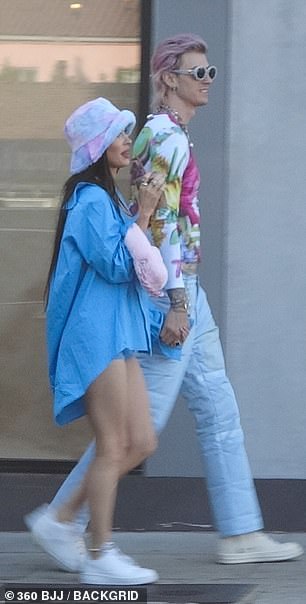 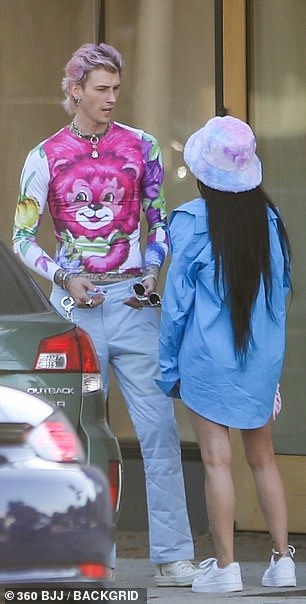 Walk and talk: At one point, the rapper held Megan’s hand as they strolled down the sidewalk 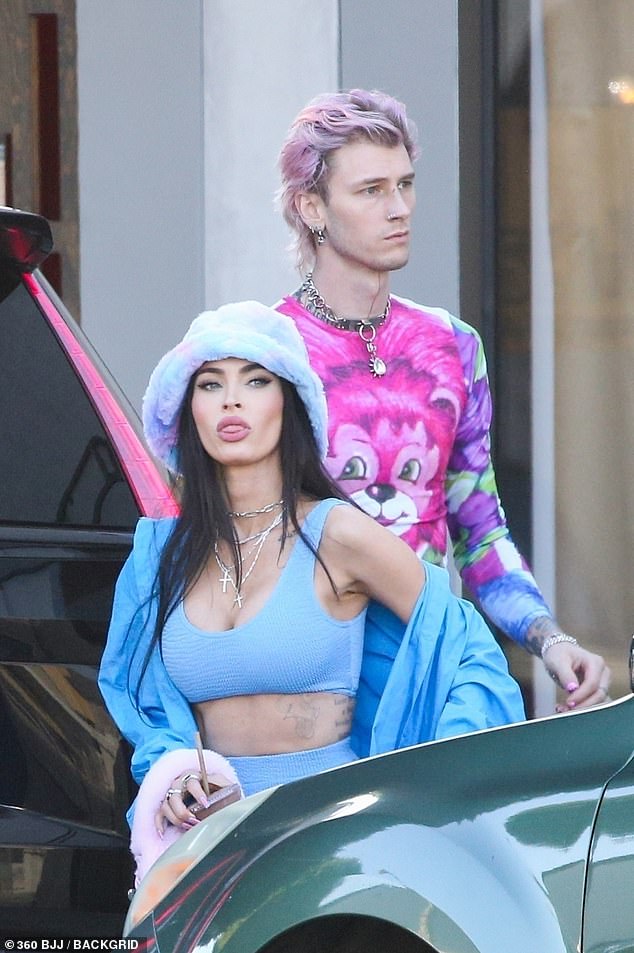 Ab fab! The beauty showed off her svelte abs during the outing

‘She said, “When you’re on stage, you’re where you love to be. Don’t think about anything, you don’t have to prove anything to anybody. They all came to see you, so just give them the best f****** performance of their life.”‘

Insiders have also told TMZ the couple are doing fine and have no major issues.

While the couple are obviously unable to be with each other all the time due to their busy work schedules and children of their own to raise, sources told TMZ the lovebirds are solid. 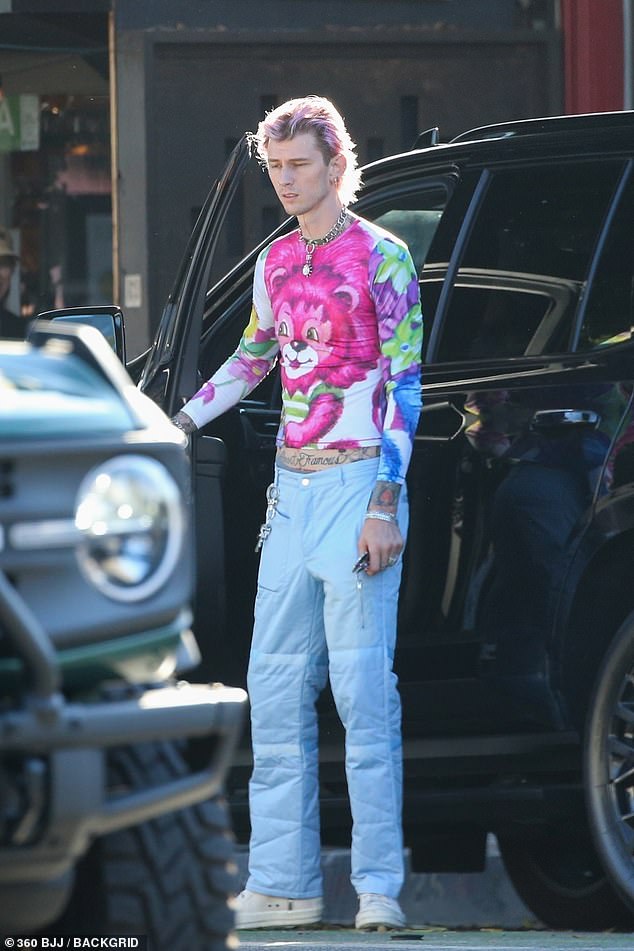 Standing out! The 32-year-old wore a bright cartoon print top and blue trousers 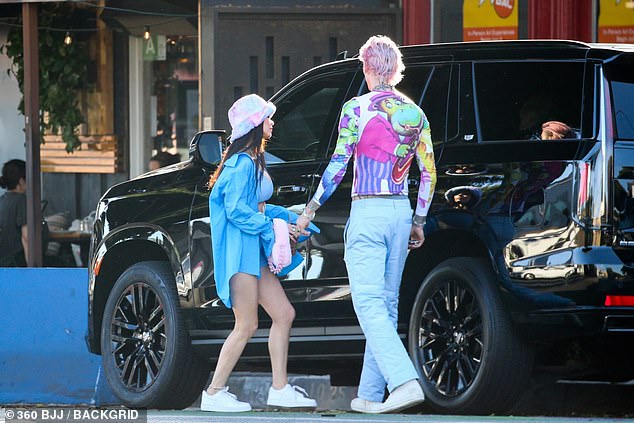 It takes two! While the couple are obviously unable to be with each other all the time due to their busy work schedules and children of their own, sources told TMZ the lovebirds are solid